We use cookies to provide you with a better experience. By continuing to browse the site you are agreeing to our use of cookies in accordance with our Cookie Policy.
Home » M&M’s unveils three new flavors

Each new flavor is made with dark chocolate and wrapped in the signature M&M’s crispy confectionery shell. The Crunchy Raspberry variety features a regular rice crisp center, and the Crunchy Espresso and Crunchy Mint varieties feature a cocoa rice crisp center. 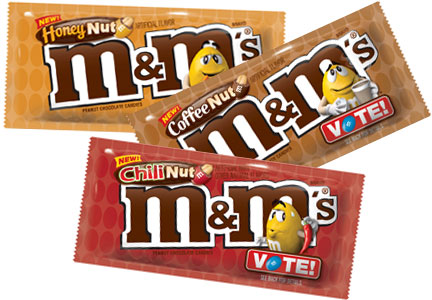 “Building off the success and popularity of the 2016 M&M’s Flavor Vote, we wanted to engage our fans once again by empowering them to help decide the next crunchy flavor of M&M’s,” said Allison Miazga-Bedrick, brand director for M&M’s. “We selected three new decadent flavors we believe our fans will enjoy, as they reflect the on-trend, unique and bold tastes growing in popularity across the U.S.”

Crunchy Espresso, Crunchy Raspberry and Crunchy Mint M&M’s will be available nationwide starting April 1, and the vote will be open until May 25. Consumers may vote for their favorite flavor once per day via flavorvote.mms.com, using the #VoteCrunchyEspresso, #VoteCrunchyRaspberry or #VoteCrunchyMint hashtags on social media or texting the word “VOTE” to 84444. The flavor with the most votes will be announced in August 2018 and continue to be sold at stores nationwide for an 18-month period.