We use cookies to provide you with a better experience. By continuing to browse the site you are agreeing to our use of cookies in accordance with our Cookie Policy.
Home » General Mills getting serious about soil health

ANAHEIM, CALIF. — General Mills, Inc. has set out to save the planet, one Honey Bunny Graham at a time. The Minneapolis-based company through its Annie's brand is introducing two limited-edition products featuring ingredients grown using regenerative farming practices.

Regeneration was a popular theme at Natural Products Expo West, held March 8-11 in Anaheim, Calif., where General Mills unveiled elbow pasta and cheddar and bunny-shaped baked graham snacks made using organic ingredients from regenerative farms in Montana. The farmers, Nate Powell-Palm and Casey Bailey, are named and pictured on the packaging. The products will be sold in Sprouts stores nationwide beginning in April, said Carla Vernon, president of Annie's Foods at General Mills.

"We are passionately committed to trying to find practices that can improve soil health across the value chain, and we are firm believers that there’s now a new opportunity to not just think about agriculture practices that do no harm; we actually believe there’s a way for agriculture to build towards the better good," Ms. Vernon told Food Business News during an interview at Expo West.

"We’re very emotional about transparency, and that’s why we want it to be not just a litany of scientific sourcing facts but a personal connection that farms are run by farmers."
— Carla Vernon, General Mills

Regenerative farming practices include cover cropping and extended crop rotations and may improve soil health and reduce greenhouse gases in the atmosphere by sequestering carbon in the soil. Common agricultural practices such as over-tilling, over-grazing and overuse of chemicals have led to erosion of topsoil, according to the company.

"We know consumers want transparency," Ms. Vernon said. "Transparency, frankly, can come across very scientific and unemotional. We’re very emotional about transparency, and that’s why we want it to be not just a litany of scientific sourcing facts but a personal connection that farms are run by farmers, and farmers are our partners, and good farmer partnerships between businesses and farmers we can have meaning in our relationships, and that meaning is going to translate to a commitment to a healthier agricultural practice."

"As a little farmer in Montana I’ve been worried about the organic label," Mr. Bailey said. "As big companies are buying the smaller companies, that’s a worry to me, but meeting the people who are on the staff of Annie’s has been revolutionary for how I understand where we can go with this and scale good things, pollinators and soil health." 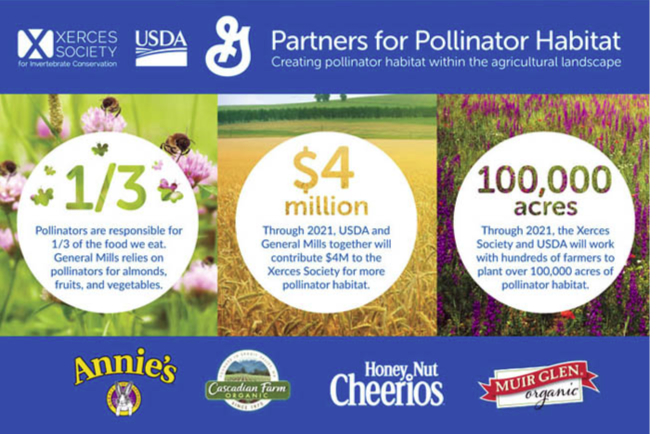 Mr. Bailey said he connected with the procurement team at General Mills a couple years ago following a conference held by  the Xerces Society, an organization committed to pollinator conservation. General Mills recently pledged to donate $4 million to Xerces Society to support and accelerate pollinator habitat restoration.

"Having those pollinators as part of the ecosystem and allowing the strong wildflower native plants to help with water retention and reduce soil erosion is an important part of regenerative agriculture," Ms. Vernon said.

Epic Provisions, which General Mills acquired in early 2016, has long been a champion of regenerative agriculture. Several years ago, the meat snack company partnered with The Savory Institute to restore grassland through biodynamic ranching practices. By aerating the ground with their hooves and fertilizing the soil, pastured animals may contribute to healthier land. 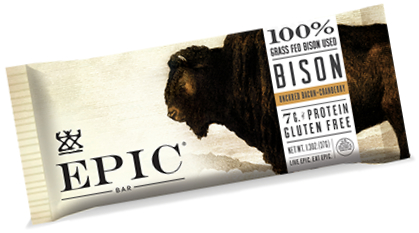 "As we think about the role animals play in our regenerative agriculture strategy, regenerative grazing and regenerative ranching is a piece of that," Ms. Vernon said. "Animals as a natural part of a functioning ecosystem are so important, that story comes to life through that Epic brand because we really celebrate that on the packaging."

The limited-edition Annie's products may lead to a larger effort in the future, Ms. Vernon said.

"This was almost proof of concept for us," Ms. Vernon said. "Could people get excited about it? Could we make it work from a supply chain and agriculture perspective? And if the world is as excited as we are, then count on us getting bigger."

'It's good business to take care of soil'

"Very simply put, the health of people and the planet is reliant on healthy soil, and our soil is in trouble," Ms. Marcario said. "The big three chemical companies control 75% of all the seed, of all the pesticides. U.S. soil is being lost at a rate at 10 times faster than it’s being replenished. The rise of chemical agriculture has coincided with an alarming rise in cancer rates and allergens and diseases. Pollinators are declining at shocking rates, and I don’t mean to be overly dramatic, but when the pollinators are gone, it’s game over for us humans."

Patagonia, which began as an apparel company more than 40 years ago, in 2012 launched Patagonia Provisions, a food brand with a focus on sourcing products in innovative ways to benefit and regenerate the planet, Ms. Marcario said. More recently, the company became involved in spearheading the creation of a regenerative organic standard as a basis for certification.

"Using U.S.D.A. Organic as our absolute baseline, our aim was to build a coalition to champion a high standard and to use it to create demand in the marketplace and to co-learn and to influence policy and to hold the high bar for brands and their customers who frankly have been confused about which labels to trust," Ms. Marcario said. "Scientists predict that current industrial farming practices and deforestation will eliminate topsoil in 60 years if we continue on the course we’re on, and as grim as that picture looks, the promise of regenerative agriculture is not only a process that can rebuild topsoil but can really impact climate change in a positive way."

While there are a number of barriers to adopting organic and regenerative practices, Ms. Marcario said "it's good business to take care of soil."

"I know that to make these shifts is almost impossible in the suicidal insanity of quarterly financial earning reports," she said. "But I would say maybe instead of overpaying for organic brands you might consider just making the change in your own supply chain and investing in it. And I think your employees would be energized to spend their careers doing something really good for people and the planet."