Kernza and the promise of perennial agriculture

ANAHEIM, CALIF. — At The Perennial restaurant in San Francisco, customers may order a crisp waffle, fresh-baked bread or a sourdough crumble made with Kernza, a perennial grain with deep roots that holds great promise for a sustainable food supply.

Kernza is an intermediate wheatgrass developed by The Land Institute, a non-profit organization in Salina, Kas., and is shown to have a positive impact on soil health, carbon sequestration and water retention.

“It's a gamechanger," said Rachel Stroer, chief operating officer of The Land Institute, during a presentation at Natural Products Expo West in Anaheim. "After four decades of rigorous research and 20 years of intensive plant breeding, the first perennial grain has hit the U.S. market."

Domesticated from a wild relative of annual wheat, the sweet, nutty grain soon may be found in cereals and snacks from General Mills, Inc., Minneapolis, which recently announced a collaboration with The Land Institute to commercialize Kernza. Patagonia Provisions, Ventura, Calif., sources the grain for its Long Root Ale, a craft beer brewed in Portland, Ore. Birchwood Cafe in Minneapolis serves pancakes and grain salads made with the grain. 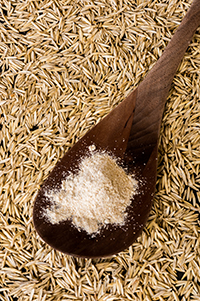 "They utilize water and nutrients more efficiently and prevent leaching of nitrogen into the water table," she said. "They build soil organic matter while defending themselves against drought and disease...

"In short, the ecological promises of perennial grains are robust. This new technology, perenniality, represents the closest grain agriculture can come to functioning like natural ecosystems and our best shot, in my opinion, at sustaining human life on this planet for generations to come."

But there are challenges, she noted, and realizing the full potential of perennial agriculture on a global scale will require a movement.

"It will take all of us — farmers, retailers, scientists, foodies, business leaders, creative folks and social media junkies," Ms. Stroer said. "We’ll need investors, philanthropists and policy makers. Proof of concept does not mean we can stop and just watch Kernza revolutionize agriculture. Today we lack the yield and seed supply among other things for that to happen. What proof of concept does mean is with an expansion of research we can get there. But that depends on you."