We use cookies to provide you with a better experience. By continuing to browse the site you are agreeing to our use of cookies in accordance with our Cookie Policy.
Home » Strong demand driving beef prices higher

KANSAS CITY — The composite beef cutout value compiled by the U.S. Department of Agriculture as of March 9 was up 10% since the first of the year and was up 2% from the same date a year ago, while the pork cutout value declined 6% since Jan. 1 and was down 11% from a year ago. There is no shortage of meat (red meat or poultry), so demand is driving the market with beef the apparent winner.

The U.S.D.A. on March 8 forecast 2018 U.S. beef exports at a record 3,025 million lbs, unchanged from its February forecast, which was up 40 million lbs from January and up 163 million lbs, or 6%, from 2017, “based on continuing strong demand in overseas markets and the weakening of the U.S. dollar,” along with “continued tightness of beef availability from Oceania.” 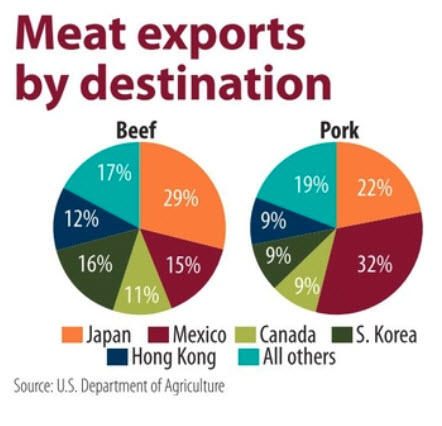 Also affecting beef supplies this year is the drought across the southern Plains, which has reduced pasture and wheat grazing and resulted in the movement of more cattle at lighter weights into feedlots in late 2017 than average. Since those cattle will be on feed longer, first-quarter marketings are expected to decline, but second-quarter sales likely will increase, somewhat shifting the normal flow of beef to the market. Beef production for all of 2018 is forecast to be up 6% from 2017.

For pork, the demand picture remains strong, but rising production appears to be keeping a lid on prices. In March the U.S.D.A. boosted forecast production in 2018 by 25 million lbs from February, with outturn for the year expected to increase 5% from 2017. The U.S.D.A. based the March increase on heavier slaughter weights, which more than offset fewer hogs marketed. The U.S.D.A. attributed the increase to still moderate feed costs (though rising), favorable winter weather in major producing areas and positive producer returns. The U.S.D.A. said in February that higher hog prices may have been more the result of expanded packer slaughter capacity as it wasn’t clear if consumer demand for pork was keeping pace with production increases.

Like beef, pork exports also have been strong. Exports in 2017 equated to 22% of U.S. pork production (compared to 11% for beef) and are expected to increase 6% in 2018 (maintaining a 22% share of production). Expected lower pork prices in 2018 are seen as an incentive for increased exports. Mexico is by far the largest buyer of U.S. pork, taking 32% of total U.S. pork exports in 2017, followed by Japan at 22% and Canada, South Korea and China/Hong Kong at just over 9% each.

Stocks of meat in freezers, which are just one indication of demand, varied widely between beef, pork and poultry as of Jan. 31 (the latest data available). Frozen beef stocks at 499,554,000 lbs were down 7% from a record high a year earlier. Pork stocks at 567,984,000 lbs were up 8% from 2017 (record high in January 2016), and total poultry stocks at 1,252 million lbs were record high as of Jan. 31 this year, although neither chicken or turkey were at record levels individually. Sharply higher pork belly stocks (the raw material for bacon), which on Jan. 31 were up 219% from record lows a year earlier, and lower belly prices so far this year were seen as major factors in pulling down the overall pork carcass cutout value.

Other factors also will impact meat and poultry production, exports and supply in the coming months, including feed prices (corn values continue to rise on strong export demand and weather woes in Argentina), weather and trade issues, the latter of which remain unpredictable.