Chobani stretches out the yogurt category

“You would never do consumer research, and the outcome is cucumber-apple,” said Tim Brown, president and chief operating officer. “You get people to places they didn’t know they wanted to go.”

Chobani wants to delight people with flavors they never thought could be in a yogurt, he said in a March 20 presentation at the Dairy Farmers of America annual meeting in Kansas City.  Chobani, Norwich, N.Y., wants to stretch the definition of yogurt beyond solely a breakfast food that is fruit-based, he said.

“We just see stretching and stretching both our place in the category but also stretching the category out,” Mr. Brown said. “That’s sort of the idea with Flip; to get people who are snacking on other things and bring them into the yogurt category.”

Chobani Flip combines Greek yogurt with toppings such as dark chocolate, nuts or cookie pieces on the side. Almond Coco Loco is a top-selling variety. While Flips may work as an afternoon snack, Chobani later this year will launch a squeeze pouch that may be used in versatile ways, including for evening meals, Mr. Brown said.

“We want people to use it for cooking,” he said. “We want it to be used at different times of the day.”

The yogurt category faces a challenge in often being found in refrigerated sections in the back of retail stores, but technology could place yogurt in front of people more often, he said. People increasingly are buying products online and then picking them up at the store. 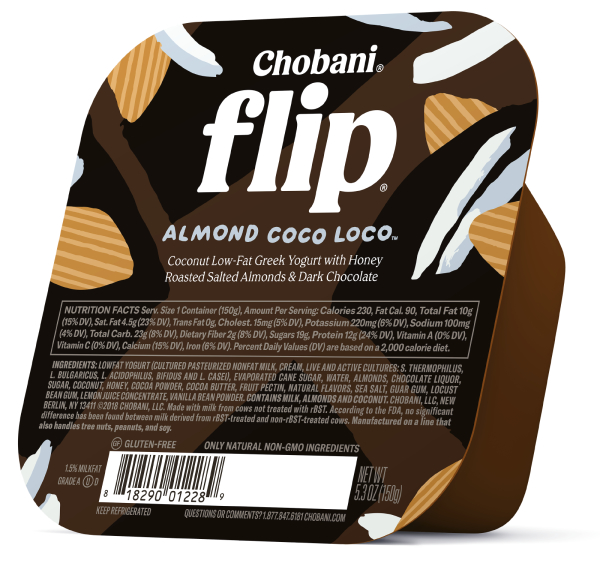 “So how are we going to be on that list?” Mr. Brown said.

Hamdi Ulukaya, Chobani’s chief executive officer, founded the company 10 years ago, and it soon became a leader in Greek yogurt. Mr. Brown has worked at the company for a year now. Previously the president and c.e.o. of Nestle Waters North America, he said he is trying to get Chobani to “do things a little bit more disciplined” and to have a “little bit longer planning.”

The company in some ways reminds him of how Nestle began its water business decades ago: “Feeling like you have to hustle every day to make it happen,” he said. Chobani as a company does not want to get complacent and miss market opportunities.

“People are there to change things, to be restless, not to be complacent,” Mr. Brown said.