We use cookies to provide you with a better experience. By continuing to browse the site you are agreeing to our use of cookies in accordance with our Cookie Policy.
Skip To Content
Home » Meet ReGrained, a company turning trash into delicious, nutritious treasure

SAN FRANCISCO — “Our whole mission is to reduce waste and feed people,” said Daniel Kurzrock, co-founder and chief executive officer of food start-up ReGrained, while sipping a craft beer in a noisy taproom in San Francisco’s hip, bustling Mission District. “That is what we exist to do.”

The star ingredient of ReGrained snack bars is brewers’ spent grain, an unsavory term for a highly nutritious, functional byproduct of beer making. The brand, which currently sources from among the dozens of local breweries in San Francisco, was built as a platform for this previously overlooked, undervalued ingredient, of which tens of billions of pounds per year are wasted or fed to pigs.

With help from the U.S. Department of Agriculture, ReGrained has developed a patent-pending technology to process and stabilize the brewery byproduct into a food-grade, value-added ingredient that may be used in numerous applications across the food industry. Several leading manufacturers, including pasta maker Barilla, already have shown interest in co-developing products with the trademarked ReGrained Supergrain+ flour. 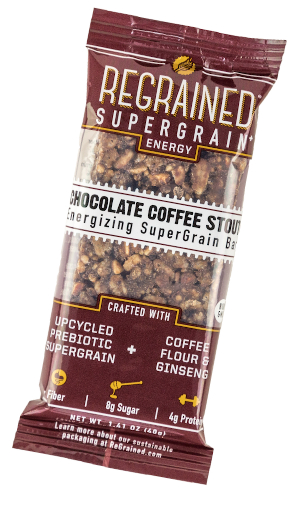 “We’re not a formally bifurcated business, but we’re really doing two things in support of one another,” Mr. Kurzrock said. “One is our vertically integrated supply chain around how we harvest the grain from the breweries and actually process it into a not only viable but desirable food ingredient with our flour. And then the other is building the market for that flour, which we’re doing with our brand by creating ready-to-eat products like our bars, and we’ve got some savory snacks coming soon.

“What we’re building toward, and we’re in active development with other food companies, is being an ‘Intel Inside’ for them, so creating products that are ‘Powered by ReGrained.’ Having ReGrained become the next quinoa. A whole category of grain-based products. That’s really our vision. And then extending that and applying it to other nutritious byproducts as well.”

“We started making beer every week, and we realized every time we made a batch of beer, it also felt like we were making a batch of food and then throwing it out,” Mr. Kurzrock recalled. “You’re taking grain and much like oatmeal you’re adding hot water to it and letting that soak, and then you’re draining that liquid out.” 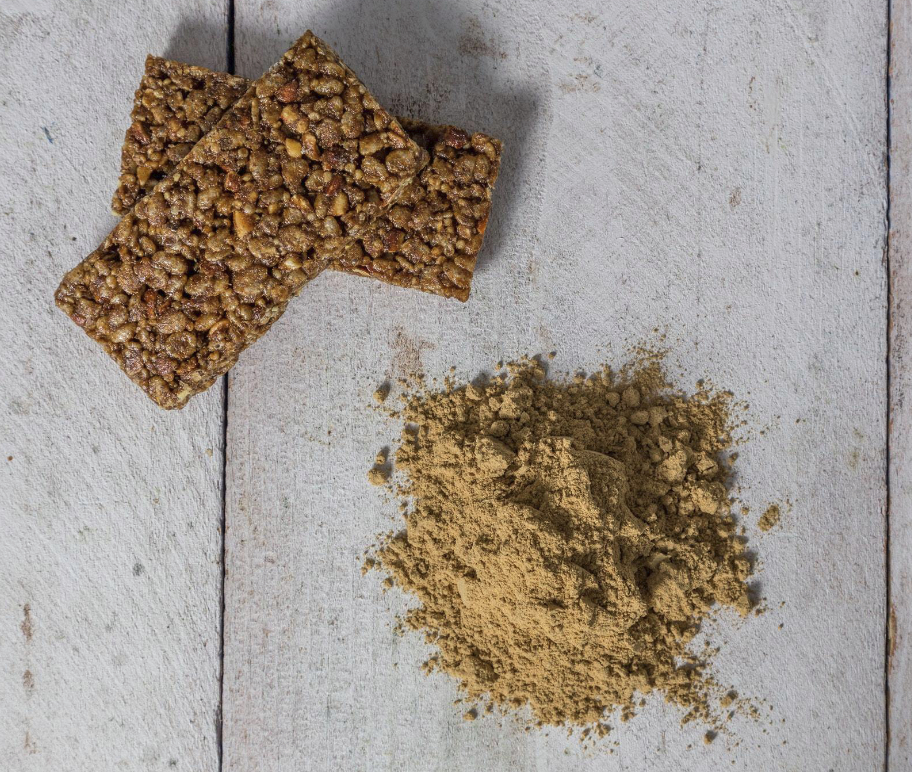 The remaining grain was often tossed in a dumpster, until Mr. Kurzrock discovered a bread recipe featuring the byproduct.

“It wasn’t the best bread in the world, but it was good, and it was fresh,” he said. “We started selling the loaves of bread to friends in order to fund the beermaking.”

This inspired Mr. Kurzrock to develop a new business model, a combined brewery and bakery. He persuaded Mr. Schwartz to join him in the venture.

“Through our research we got continually encouraged about the concept because there was actually a pretty extensive wealth of research that’s been done about the nutritional viability of this ingredient,” Mr. Kurzrock said. “But what we realized as we were digging in was there’s this huge gap between all of the academia and research and commercial applications. And, so, as much as we loved the idea of having a closed-loop brewery-bakery, we realized there might be a bigger opportunity to create a platform that can close the loop between the brewing industry and the food industry.”

Mr. Schwartz developed the initial recipes for the bars, which he and Mr. Kurzrock began selling at a local farmers market five years ago featuring the tagline “Eat beer.”

“We were so proud of that tagline,” Mr. Kurzrock said. “But there’s some cognitive dissonance with it. It’s like, OK, does it have alcohol? Does it taste like beer? Is this healthy? Can I give this to my kid?

“The real lightbulb moment for me as a c.e.o. happened when a school district pulled us because a parent got upset. ... We realized while it was clever, it doesn’t perform at shelf without a human there explaining what we’re actually doing.”

Earlier this year, ReGrained repositioned the brand to elevate the nutritional benefits of the grain and downplay its origins in beer making. ReGrained’s trademarked SuperGrain+ flour is high in protein, dietary and prebiotic fiber and micronutrients and lower in sugar and calories than traditional wheat flour, Mr. Kurzrock said.

The company also introduced reformulated recipes for the bars featuring complex flavor profiles and premium ingredients, including puffed quinoa, organic oats and almonds plus Manuka honey, ginseng, ginger and turmeric. Of the earlier products, Mr. Kurzock said, “They tasted like a good idea at the time.”

Mr. Saneski shared the vision and passion for reducing food waste and had learned to create delicious dishes with peels, rinds and stems.

“I think the restaurant chef can transform things that are typically thrown out into the garbage into things that are really delicious,” Mr. Saneski said. “The margins are so slim in restaurants; they have to.”

Mr. Kurzrock added, “One of the things Phil was talking to us about when we first met was how he loved creating plated dinners and things like that, but he was frustrated that that only scaled as far as there were seats in the restaurant. Through this kind of role, we’re very fortunate that he has the opportunity to be truly innovative and create products that can actually make an outsized impact on our food system.”

A key change in the reformulation of the ReGrained bars was the transition from a whole grain to a flour, which has improved the texture, flavor and nutrition, Mr. Kurzrock said.

“People are loving them now,” Mr. Kurzrock said. “We always had a lot of enthusiasm for what we were trying to do, and it’s incredible to get to the point where we now have a product that really stands on its own. To be successful in making a sustainable food business, that’s key. The product has to taste good.

“It has to make the right thing the easy thing.”

The Tesla of snack bars

Think of ReGrained as the Tesla of snack bars, Mr. Kurzrock said. It’s an appropriate analogy considering we were sitting in a Bay Area bar.

“(Tesla makes) really fast, really beautiful cars that happen to be electric,” he said. “How do we make really tasty, really nutritious food that also happens to make a big impact on the planet?”

True to its mission, ReGrained uses 100% compostable packaging for the bars, a nonnegotiable value that brings several challenges, including a higher cost and shorter shelf-life. There’s also the frustrating reality that many consumers won’t properly compost it, Mr. Kurzrock said. 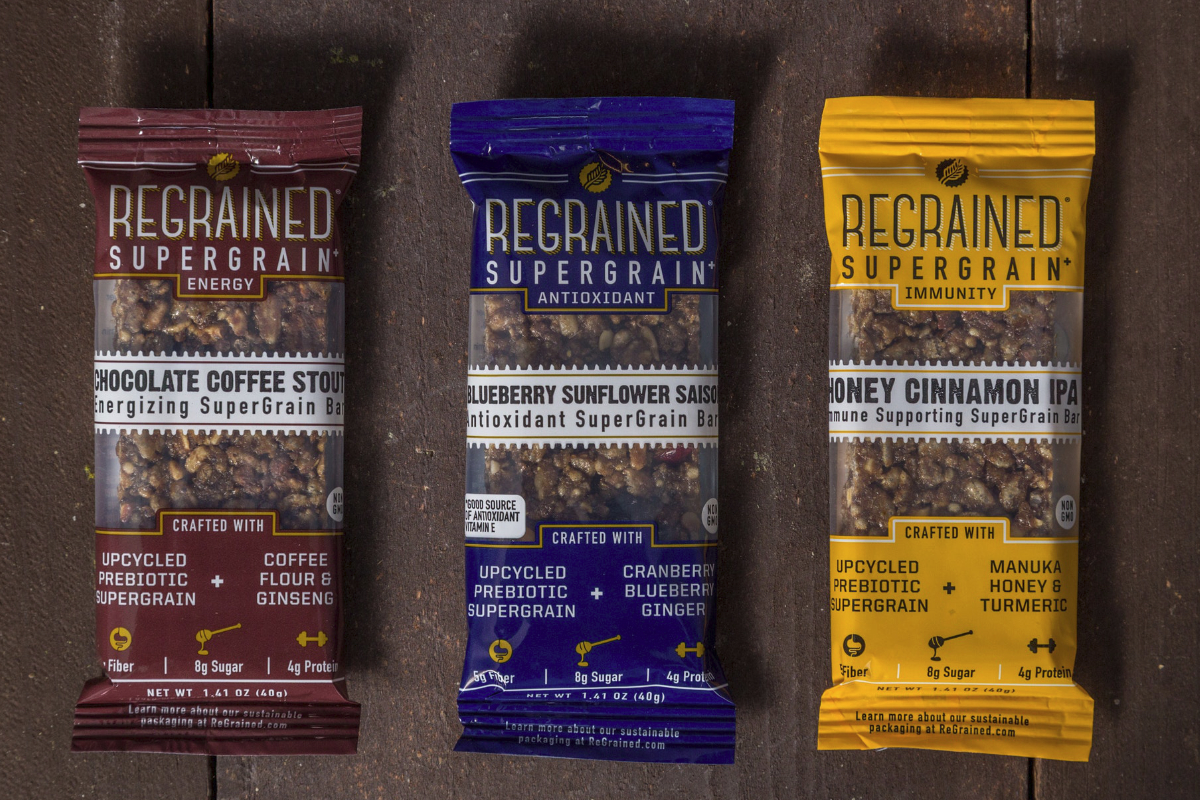 “A lot of companies don’t like to admit that they’re actually in the future trash business,” he said. “We wanted to prove that you can really bake this value into your business model from the beginning, and that it is possible to have a shelf-stable packaged food product that is made with a compostable wrapper. We hope by showing it can be done to help inspire other companies to follow our lead.”

“It’s tough for these big companies to work backward in their supply chain and incorporate a higher cost and shorter shelf life into their distribution logistics and operating margins,” Mr. Kurzrock said. “But we believe it’s an ethical imperative and hope to see the movement continue and grow exponentially.”

The topic of innovating with food waste is topping trend lists of late, as a crop of emerging brands showcase creative uses for such items as coffee fruit and leftover pulp from juice production.

“We call it edible upcycling, which is a new term, but it’s an old idea,” Mr. Kurzrock said. “A lot of people probably don’t realize that whey for example is a byproduct of cheesemaking.”

A challenge of marketing products made with byproducts is communicating the positive impact to the consumer, “but... you also don’t want them to feel like they’re eating garbage,” Mr. Kurzrock said. 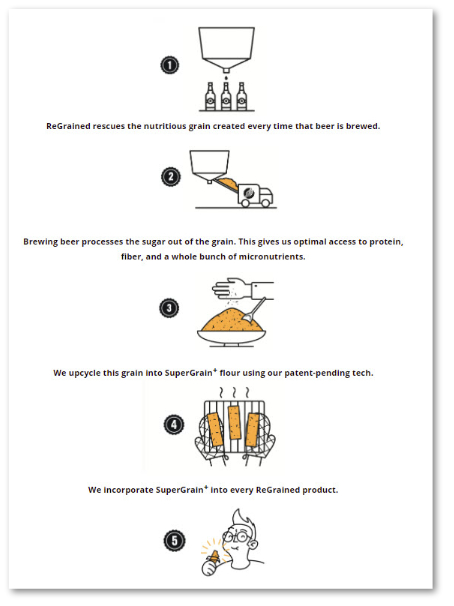 Processing the grain is another challenge, he said.

“This stuff is really unstable when it comes out of the brewery,” he said. “It’s incredibly wet, like 85% on average moisture. It’s soggy. That’s really energy intensive to dry with traditional methods. Also, because of the sugars that are in it, it’s extra volatile so it spoils really quickly.”

“This is something that has been done on a small scale quite a bit, and what we’re looking to create is the actual industrial, for lack of a better word, solution,” Mr. Kurzrock said. “We want to create the platform for this to really take root by building a brand that defines this ingredient that we hope to be the Kleenex or Frisbee effect on this.”

Mr. Saneski described the flavor of ReGrained SuperGrain+ as similar to toasted almonds or oatmeal with a graham cracker aroma. In addition to baking applications, the flour may be used in coatings or as a binder or thickener, he said. ReGrained’s next products will include savory snacks such as pretzels that showcase the grain’s flavor, Mr. Kurzrock said, describing it as “the hero, not just in name but in taste.”

“What we’ve learned about this ingredient is we’re not really limited in where we can go with it; it’s a question of where should we go with it,” Mr. Kurzrock said.

Pasta is a possibility. ReGrained recently was the first announced investment by Blu1877, the venture capital fund launched by the Barilla Group. As part of the partnership, Mr. Kurzrock said the companies are working to co-develop products featuring ReGrained Supergrain+ flour.

Through Terra, the Food + Ag Tech Accelerator by Rabobank and RocketSpace, which Mr. Kurzrock described as a corporate matchmaking program, ReGrained also is collaborating with Givaudan and GrainCorp on innovation initiatives.

“There are a lot of positives that come with this convergence of big and small,” Mr. Kurzrock said. “I think it’s really exciting because for these big companies that already have scale, there are some things that you don’t need to reinvent the wheel on. What we do need to do is change the direction where that wheel is rolling.

“I think as a leader of an emerging company and my peers, we have this opportunity to be the little tugboat that can steer these massive C.P.G. companies toward more innovative, sustainable futures.”