We use cookies to provide you with a better experience. By continuing to browse the site you are agreeing to our use of cookies in accordance with our Cookie Policy.
Home » Marfrig Global Foods to acquire 51% stake in National Beef

SÃO PAULO, BRAZIL — Marfrig Global Foods, one of the world’s largest animal protein producers, has reached an agreement to acquire a 51% stake in National Beef Packing Co., L.L.C. for $969 million. Based in Kansas City, National Beef is the fourth-largest beef processor in the United States with slaughtering capacity of 12,000 heads of cattle per day and annual sales of $7.3 billion. National Beef is controlled by Leucadia National Corp., which owns a 79% interest in the company.

Once the transaction is concluded, Marfrig Global Foods will become the world’s second-largest beef processor with sales of $13 billion.

Marfrig said the acquisition of National Beef fits into the company’s strategic plan, achieving two key objectives. First, the deal consolidates Marfrig’s position in the beef industry. National Beef exports to 40 countries, including Japan, which is a market currently closed to beef exports from Brazil.

“The acquisition of National Beef represents the realization of a unique opportunity,” said Martín Secco, chief executive officer of Marfrig. “With the transaction, we will have operations in the world’s two largest beef markets, will gain access to extremely sophisticated consumer countries and will be able to grow while maintaining rigorous financial discipline.” 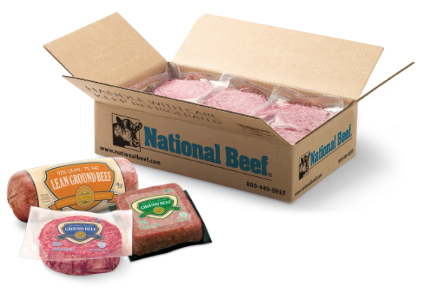 In addition to the acquisition of National Beef, Marfrig said it has taken other steps to deleverage, including the decision to sell Keystone Foods, a supplier of value-added food products to the food service, retail, convenience and industrial industries. The sale of Keystone Foods and the acquisition of National Beef is expected to help Marfrig achieve its goal of reaching a leverage ratio of 2.5 times by the end of 2018.

“The acquisition of National Beef reflects our sustainable growth strategy,” said Marcos Molina, chairman of the board of directors of Marfrig Global Foods. "From now on, we have become the Brazilian company of the sector with the best financial health, proved into the lowest rates of leverage.”

Marfrig said National Beef’s key executives will remain in place, led by Tim Klein as c.e.o. Meanwhile, the board of managers of National Beef will consist of nine members, including five nominated by Marfrig, two by Leucadia and two by the other minority members.

“We are pleased to remain a significant shareholder in National Beef and to partner with Marfrig and the company’s management team in its continued development,” said Rich Handler, c.e.o. of Leucadia, and Brian Friedman, president of Leucadia.

National Beef has two slaughterhouses located in Dodge City and Liberal, Kas., and accounts for approximately 13% of total U.S. cattle slaughtering capacity. Once the transaction closes, Leucadia will transfer control to Marfrig and remain a minority shareholder in National Beef, with a 31% interest. The U.S. Premium Beef, an association of American producers, will hold 15% and other shareholders with the remaining 3%.

Leucadia and the other investors have agreed not to sell their shares in National Beef for at least five years.