We use cookies to provide you with a better experience. By continuing to browse the site you are agreeing to our use of cookies in accordance with our Cookie Policy.
Home » Benefits of blended burgers

KANSAS CITY — Two matters have captured the American consumer’s attention in recent years – and consequently the attention of the food-processing industry. An awareness of changes in the earth’s environment and the future protection of it, along with an ongoing quest for health and wellness, remain at the top of the list of priorities when consumers choose food products. What were once trends have become everyday concerns of the typical shopper.

A product consisting of a mix of ground beef and ground mushrooms has grown, evolved and now fills a space that adequately addresses the environment and health and wellness at the same time. Not only that, the mushroom and beef mixture also offers suppliers and customers a further health benefit and label claim without the typical extra cost that comes with it. The mushroom and beef blend has recently surfaced and become a regular product offering in food service.

About two years ago, Cargill Protein and Sodexo, a food service and facilities management company, began to work together on a premium ground beef product from cattle that had never been given antibiotics or hormones. The partnership came in an attempt by the two companies to provide customers and consumers with a product they wanted and asked for. Sodexo surveyed adult workers and college-aged respondents regarding attributes they would most prefer in a ground beef product.

“Antibiotic and hormone use were clearly, in both groups, way at the top in attributes that people are looking for,” said Rob Morasco, senior director for culinary development at Sodexo, North America. “So, we said OK, that’s an important thing. How are we going to address that in our spaces and go forward?” 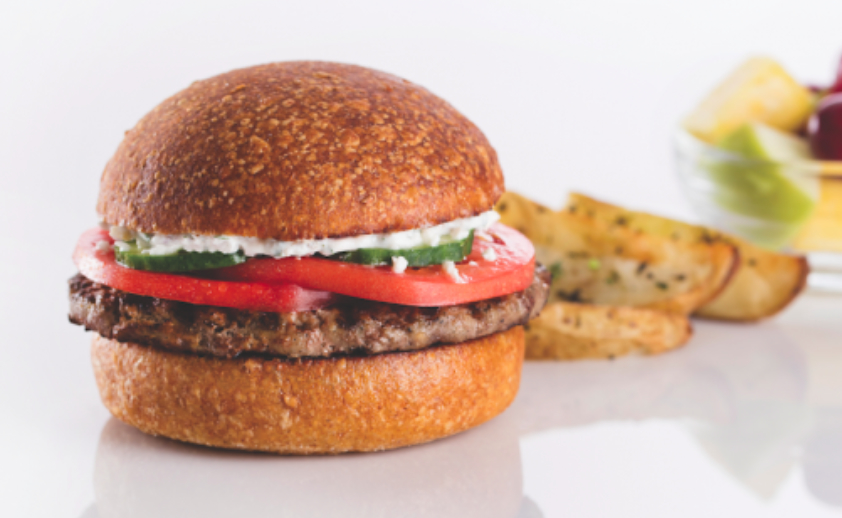 The main impediment to putting a ground beef product without hormones and antibiotics into the market, for both Cargill and Sodexo, was cost. Neither company wanted a price increase to their end customers. With drastic price fluctuations in the cost of conventional ground beef versus a product with no antibiotics or hormones, they needed to find another solution.

“Customers liked the concept but found the cost prohibitive, so we needed to innovate,” said Steve Zutell, corporate account leader at Cargill. “At about the same time, we had a meeting with the Mushroom Council to determine possibilities for protein collaboration.”

Cargill brought the concept of a mushroom and ground beef mix, with the ground beef portion of the mix being antibiotic and hormone free, to Sodexo.

“Lo and behold, a few different samples and approaches with different blends of mushrooms, different levels of mushrooms versus ground beef, and we landed on a patty initially that we piloted last year,” Mr. Morasco said. 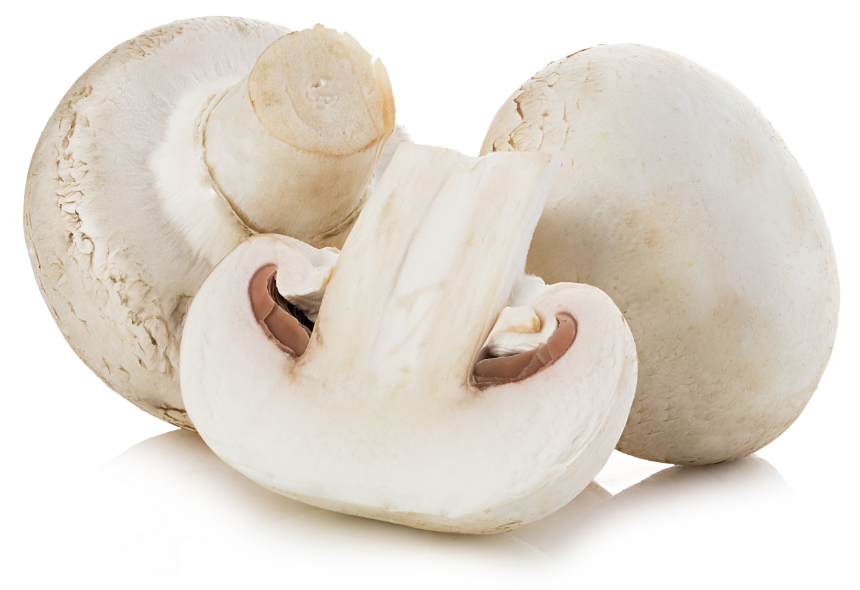 “We’re listening to our customers and collaborating deeply with them to develop solutions focused on nutrition, flavor, affordability, sustainability and other important factors that drive consumer choice,” Mr. Zutell says. “The collaborative process brought together consumer insight and trend analysis teams that worked to identify the key components of acceptability.”

Mr. Zutell worked with Sodexo throughout the process to make sure the collaborative effort met the company's needs. He noted the added benefits produced by the decision to mix ground mushrooms with the hormone and antibiotic free ground beef.

Once cost was brought under control by incorporating mushrooms (Morasco said Sodexo can offer the no antibiotics and hormone-free ground beef mix using 25% ground mushrooms at very minimal or no price increase to consumers), Cargill and Sodexo began to perfect and tweak the product to make it flexible and versatile within the food service market Sodexo serves.

Sodexo started with a soft rollout of the patty last year. It created eight burger recipes under its Mindful umbrella. The company’s Mindful identity creates a feeling of overall healthy eating without broadcasting clinical specifications or sacrificing flavor and quality. While there are caloric, fat, sodium etc., requirements for products to fall under the Mindful umbrella, they’re not advertised that way. 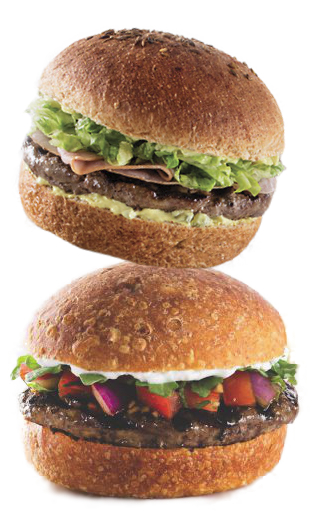 The results of the rollout were positive, but the distribution model in place called for something different, according to Mr. Morasco.

“So, we said it probably makes sense for us to move this to a bulk format because we can still do hand formed patties, but we could also open it up to things like meatloaf, chili, tacos, and everything you can think of; Salisbury steak, shepherd’s pie, stuffed peppers, all those different things … meat lasagna,” he said.

Mr. Zutell added, “Product trials were conducted in Fall 2017, and the ground beef and mushroom blend was a success. The current packaging format for the blend is in 5-lb packs, which is versatile for use in chili, tacos, sauces and many other recipes, as well as for making great-tasting burgers. The beef and mushroom blend is nutritionally balanced providing customers with an additional dietary option.”

“It’s not a new idea, but I think what’s been a big differentiator and excitement generator for us is that we made the decision to use non-conventional ground beef,” he said. “It’s ground beef that has the attributes of raised without antibiotic or hormone use. That’s our take on this one.”

The blend is slightly softer than a 100% ground beef making it especially nice for making smashburgers on flat top griddles. It also retains moisture well, which allows good performance when working in less than perfect circumstances.

“If we’re doing some remote site, or we’re doing a restricted equipment feeding scenario, where we’ve got to feed 500 people in half an hour, the hold time is phenomenal,” Mr. Morasco said. “We’ve held it for 30 min., 45 min. and an hour with little to no degradation in quality or juiciness. It really holds the moisture, which we love. It’s really fantastic from that standpoint.” 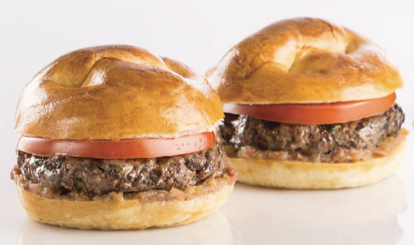 Mr. Zutell and Cargill expect the blend to be in full distribution by the end of 2018 and have ramped up production.

“Based on the enthusiastic reception, we anticipate demand will continue to increase,” he said. “The customer and consumer reaction has made this a standout product, and Sodexo has been an excellent partner and collaborator.”

Sonic Drive-In announced in early March the introduction of its Sonic Signature Slingers, made from a 100% pure beef and mushroom blend. Depending on which option is ordered, the burger starts at fewer than 350 calories. There’s a Classic Slinger topped with lettuce and tomato, diced onions, crinkle-cut dill pickles, mayonnaise and melted American cheese served on a brioche bun, and a Bacon Melt Slinger with bacon, melted cheese and mayonnaise served on a brioche bun.

Scott Uehlein, vice-president of product innovation and development for Sonic, called the offering the first of its kind in fast food. 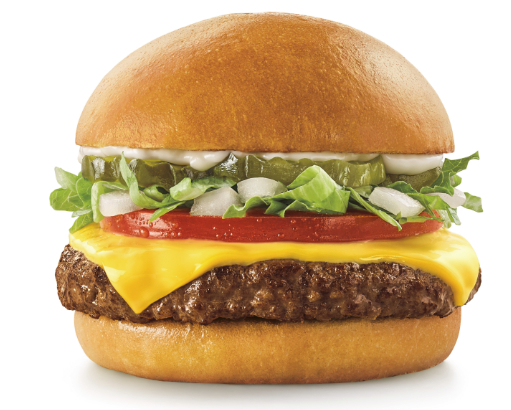 “Adding mushrooms right into the burger patty amps up the incredible flavors of the 100% pure beef and seasonings you get in each bite," Mr. Uehlein said. "This burger truly raises the bar for every other restaurant."

The Mushroom Council, which provides marketing and education on behalf of the nation’s mushroom growers and importers, is a partner on Sonic’s new blended burger as well. Bart Minor, president of the Mushroom Council, said that blending mushrooms into burger patties sits atop several food trend lists this year, and he’s excited for the future of the product.

Cargill, Sodexo, Sonic and many others in the industry view the blend as a multiple win.