We use cookies to provide you with a better experience. By continuing to browse the site you are agreeing to our use of cookies in accordance with our Cookie Policy.
Home » Coca-Cola’s Ekocenter empowers disadvantaged communities through social enterprise

CHICAGO — “If companies stop competing for a second and start collaborating, there’s a lot we can do,” said Derk Hendriksen, vice-president and general manager of the Ekocenter project for the Coca-Cola Co., Atlanta, at Tyson Foods’ Chicago office last week. Tyson hosted the monthly breakfast meeting of the Chicagoland Food and Beverage Network, which is celebrating its one-year anniversary.

“We think of life in a broad way,” he said, pointing out the company’s strategy of being “beverages for life.” “It involves the communities we live in and the planet we live on. We only have one planet and we are using it like there’s five of them.”

This new approach to business — beverages for life — was announced in early 2017. It’s about being a total beverage company. The company’s Ekocenter project embodies this strategy, as the company recognizes its growth can only be sustainable when the communities it serves are strong.

The Ekocenter project was launched by Coca-Cola in 2013. It is a social enterprise initiative to empower communities while enabling business and local economic growth. Ekocenter relies on partnerships across the public and private sector to operate sustainably.

“An Ekocenter is like ‘downtown’ in a box for many communities,” Mr. Hendriksen said.

The Ekocenter project integrates Coca-Cola’s sustainability priorities of well-being, women and water. Powered by solar energy and run by a local woman entrepreneur, an Ekocenter brings basic necessities to millions of people in some of the most remote and distressed areas of the world, mainly in Southeast Asia and sub-Saharan Africa. It is an “off-the-grid” modularly designed kiosk that becomes a hub of community activity by providing a place of commerce as well as safe drinking water, solar power and wireless communication. Other functionality that can be added to jump-start community development includes social facilities and entertainment; power generation for charging phones; cooling/refrigeration of vaccines; education opportunities; and much more.

“Our vision is to create a world where progress is powered by equal access to basic needs and in doing so, create a billion dollar brand that impacts over a billion lives,” Mr. Hendriksen said. “We are growing with purpose.”

There are currently more than 150 Ekocenters, mainly in Kenya, Tanzania, Rwanda, Ethiopia, Ghana and Vietnam, with plans to continue to expand globally.

“You can’t solve the world’s problems, not as company nor as an industry, without partnering outside and having a value network,” Mr. Hendriksen said. “It is not just a nice thing to do, it is necessary to our strategies.”

The Chicagoland Food & Beverage Network is a non-profit functioning as a networking platform to bring both big and small Chicagoland-based food and beverage companies together to work as a community. 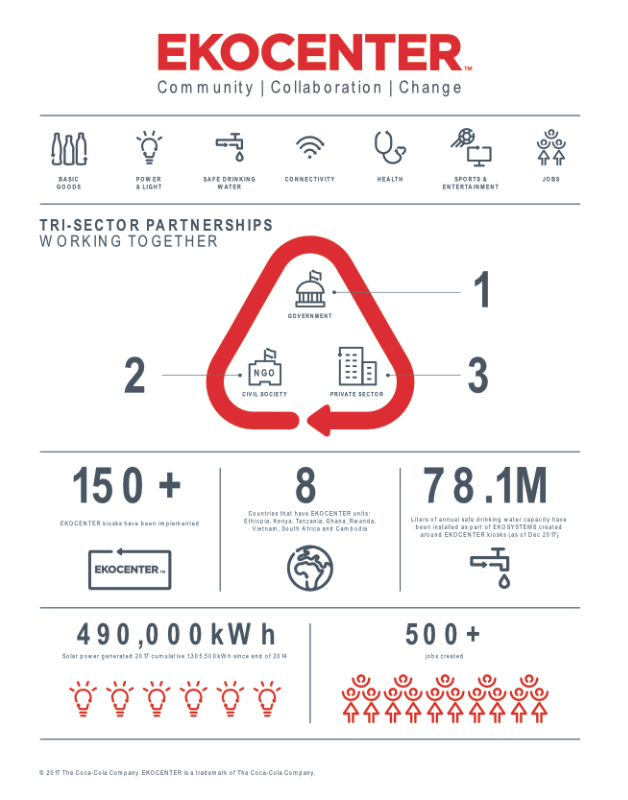