We use cookies to provide you with a better experience. By continuing to browse the site you are agreeing to our use of cookies in accordance with our Cookie Policy.
Home » Meal kits delivering on convenience and flavor

KANSAS CITY — There is Blue Apron, HelloFresh, Plated, Chef'd and Sun Basket out front with more than 200 others following behind, all seeking share of the meal kit delivery market, a market reportedly valued at approximately $1.5 billion in the U.S. The attraction to become a player is tantalizing even when potential movers and shakers know that front runner Blue Apron saw sales zoom from approximately $80 million in 2014 to $800 million in 2016 — only to have its initial public offering hopes dashed when its stock plummeted from $10 at open to $4 just five months later. Meanwhile, increased competition abounds from retail grocers selling branded meal kits as well as their own in-house meal iterations.

E-commerce within the food and beverage industry is seen to be in its early stages but is growing quickly, according to LEK research, a London-based global management consulting firm with U.S. headquarters in Boston.

“E-commerce was 2% of sales in 2017 and estimated between 9% to 20% in 2025, so it’s the start of a seismic shift of consumers ordering food and beverage with meal kits a part of it,” said Rob Wilson, the company’s managing director.

Profitability is seen as the main meal kit problem. However, Mr. Wilson is optimistic the concept will survive because it’s unarguably “a great offering for busy consumers who want to learn to cook.”

Retailers on the move

Supermarket chains see an opportunity to sell their own kits on-site or online, or sell and deliver another company’s kits online. 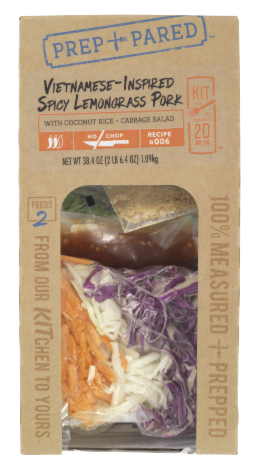 Kroger Co., Cincinnati, Ohio, launched its own meal kit service, Prep+Pared in select stores in January. Offering fresh, measured and prepped ingredients for meals that may be ready in 20 minutes or less, the kits do not require subscriptions and are available in the deli department. Plated (ranked No. 3 in meal kit sales, behind HelloFresh and Blue Apron, which jointly account for 85% of the market) was purchased by Boise-based Albertsons in September. It is expected to offer Plated kits in stores as well as online. Amazon has gotten into the business via AmazonFresh and its collaboration with Tyson Foods on Tyson Tastemakers meal kits.

The meal kit consumer, who typically must order three in one delivery, will find a lower ticket cost in the grocery channel. However, one major advantage the meal kit company has is the sales, Mr. Wilson said.

“It’s a pull system — ‘pull’ means from fulfillment, so there’s little spoilage vs. the spoilage component is great in grocery.”

As he sees it, grocers have to figure out the costs of the contents of the whole kit — the center-of-the-plate plus sides — and if one item spoils when it’s not sold, they have to dump the whole thing.

“As a meal kit provider, you fill it, ship it, and you’re done with it — you don’t have the real estate [of a market].”

Kyle Ransford, chief executive officer of Chef’d, is neither a self-described “foodie” nor a chef, but he says he loves to eat and loves to cook. The inspiration for founding the company in 2014 came when he found he was asking himself, “Why wasn’t there a button that says, ‘Send me the ingredients to make this dish’?”

Today, he couldn’t be more enthusiastic about partnering with supermarkets to grow his business, and Chef’d is already on the shelves in Gelsons Markets, Tops Friendly Markets, Target and Food Lion stores. 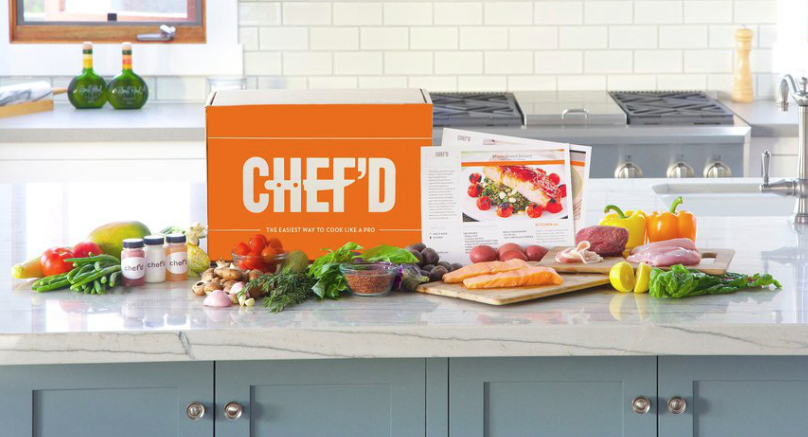 While most meal kit services have a subscription model offering a menu of dishes each week, Chef’d customers may choose from 1,600 recipes at any time because the company stocks the ingredients (approximately 5,000 stock-keeping units), essentially acting as a grocery operation.

“We’re a value-added platform that acts as a back-end fulfillment [house] for our partners’ food and marketing efforts,” Mr. Ransford said. “There’s pretty incredible technology in manufacturing and infrastructure — to get just-in-time supply chain, plus just-in-time portioning so, for example, we could bring in flour, portioning it as called for in the recipe, into individual meals.”

He predicts retail will become an increasingly important component of brand building for meal kits, with most pricing between $15-$20.

In 2016, Berlin-based Marley & Spoon partnered with Martha Stewart to launch Martha & Marley Spoon based on Ms. Stewart’s collection of recipes. On a weekly basis, customers receive a chilled box with fresh ingredients and step-by-step recipe cards.

Recipes are constantly being tweaked in the test kitchen, according to Jennifer Aaronson, the company’s culinary director.

“We’re aiming to get the most flavor out of eight ingredients (or less), and require the least amount of prep in order to complete the dish within 30 minutes,” she said. 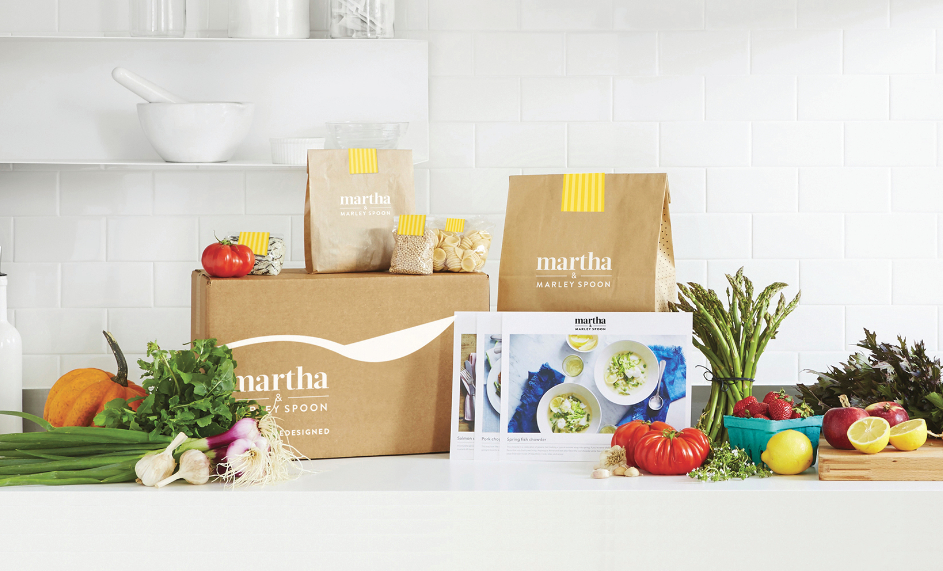 “Broiled is typically substituted for baked to effect faster cooking and caramelization; we’re also very mindful of reducing the number of dishes being used so we can cut clean-up time.”

The difference in a Martha & Marley Spoon recipe often comes in a little packet of dried sriracha powder or “other interesting spices beyond cumin,” Ms. Aaronson said.

In the future, the company may offer dessert as an add-on option, similar to the cookie kits that were very successful last holiday season.

“We see a future moving forward with these add-on kits,” Ms. Aaronson explained. “We are well on our way to profitability with a different business model,” she said, as the company now sells single kits through Amazon Fresh for next day delivery. “We are listening to our customers.”

Tampico Spice Company, Los Angeles, is reportedly one of the first to package spices in convenient cellophane bags. The company grew steadily to become spice importers, processors of their own herbs and spices, as well as spice blenders.

Today, the family-owned company is a recognized supplier of herbs and spices to innumerable clients including a growing number of meal kit companies. 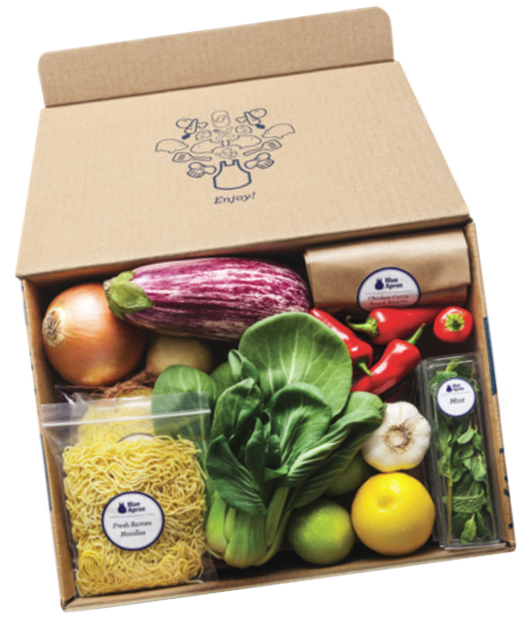 “We sold to Blue Apron until they ‘outgrew’ us and now use a co-packer,” said Tampico’s account manager, Allen Morris. “Currently, we supply industrial spices with consistent flavor and freshness to Chef’d, Martha & Marley Spoon, Purple Carrot, Gobble, and others."

Spices are a small part of an ingredient list but they can heighten overall dish flavor, so meal kit chefs often turn to Tampico’s R.&.D department for help.

“Sometimes we come up with blends, sometimes they do,” Mr. Morris said. “Some chefs ask us to develop something with a little more or a little less heat; we’ll develop, then send them a sample for approval.”

Having created an estimated 5,000 customer blends over five decades, the company has the expertise to basically provide whatever chefs want.

He particularly enjoys tracking flavor trends, noting how some spices and blends are only popular for a year or two. Currently, he sees gochugaru Korean chili powder and Aleppo peppers are having their moment; ras el hanout, a Moroccan-style spice blend, is also popular this year.

Whether recipes offered by meal kit companies come from restaurateurs, from reputable publications, associations, commodity boards or are developed in-house, somewhere along the way a research and development chef’s expertise has most likely been tastefully included. Many meal kit companies develop their recipes to stand out from all the rest. 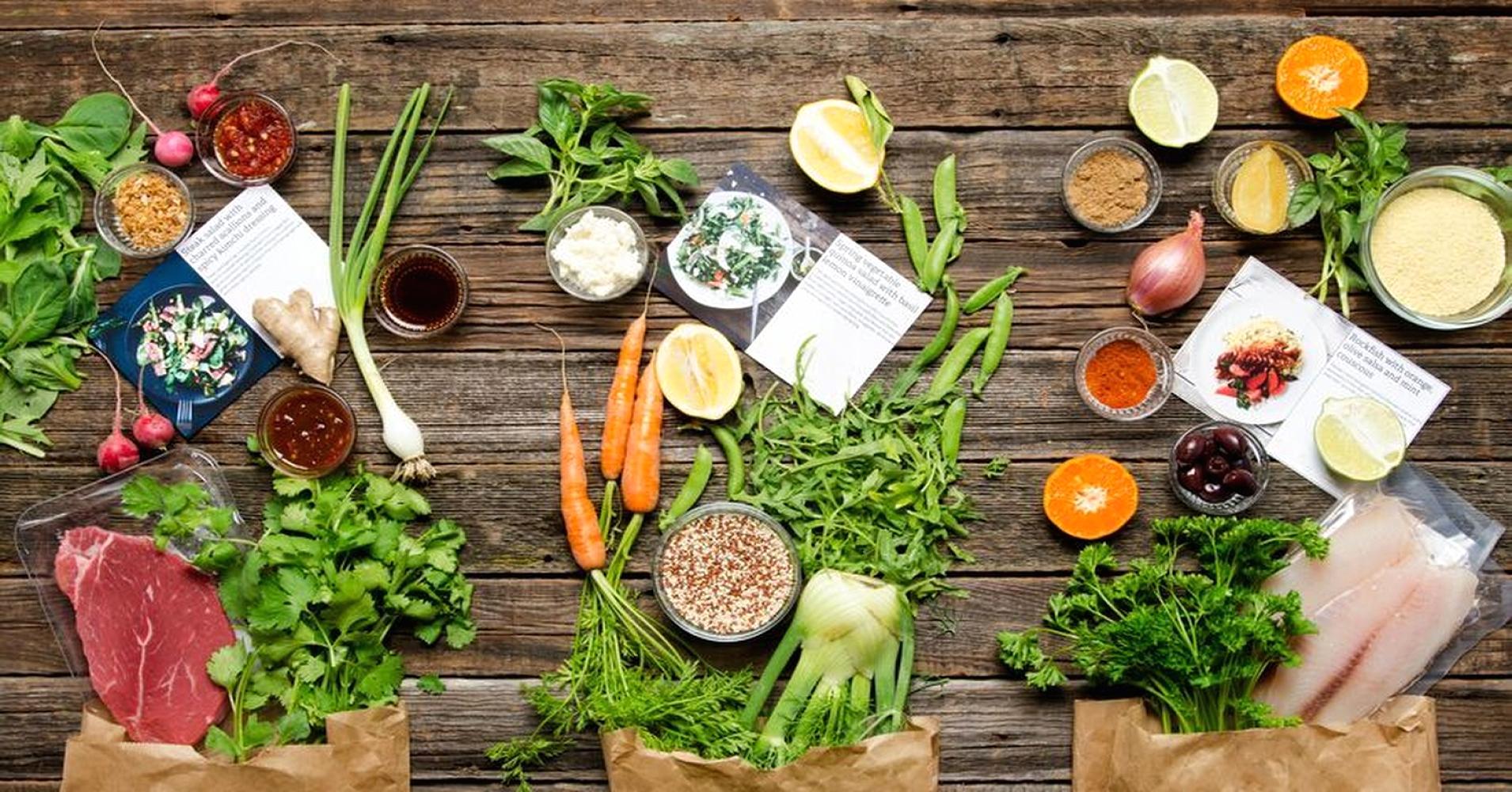 “Beyond the familiar seasoning blends, chefs can use Ethiopian berbere seasoning, for example, for a warm fragrant heat, or a red curry blend from Thailand or elsewhere in Asia (beyond traditional Indian yellow); they’ll create a broader flavor profile through [the addition of] culinary-inspired global spice and herb blends,” he said.

For meal kits with health and wellness as the focus, such as Williams-Sonoma-owned Sun Basket or 100% plant-based Purple Carrot, creating recipes featuring the big, bold flavors of herbs and spices should be the key strategy since they may well mitigate reduced sodium, fat and sugar content, Mr. Patterson said. “

The whole intent of creating mindful eating is to create satiety — not just reducing sodium, fat or sugar.”