We use cookies to provide you with a better experience. By continuing to browse the site you are agreeing to our use of cookies in accordance with our Cookie Policy.
Home » Six flavor trends shaping the food service industry

NEW YORK — International cuisine, less sweet desserts and colorful, functional ingredients are flourishing on menus, according to Mintel’s 2018 U.S. Flavor Trends report. The company explores the food service flavor trends that are hitting the mainstream, those that are just emerging and those poised for future growth in 2018 and beyond.

“Flavor is an ever-evolving art, ripe with opportunities for interpretation, innovation and creativity,” said Amanda Topper, associate director of food service research at Mintel. “Today, that opportunity lies in the expansion of international flavors and ingredients, and in the years ahead, we predict the ingenuity of new dishes will come down to enhancing the chemistry of ingredients to create hearty masterpieces. The future of flavor also lies in creating healthy dishes without giving up satisfying taste.”

Read on for six flavor trends shaping the food service industry and one set to surge in the future: 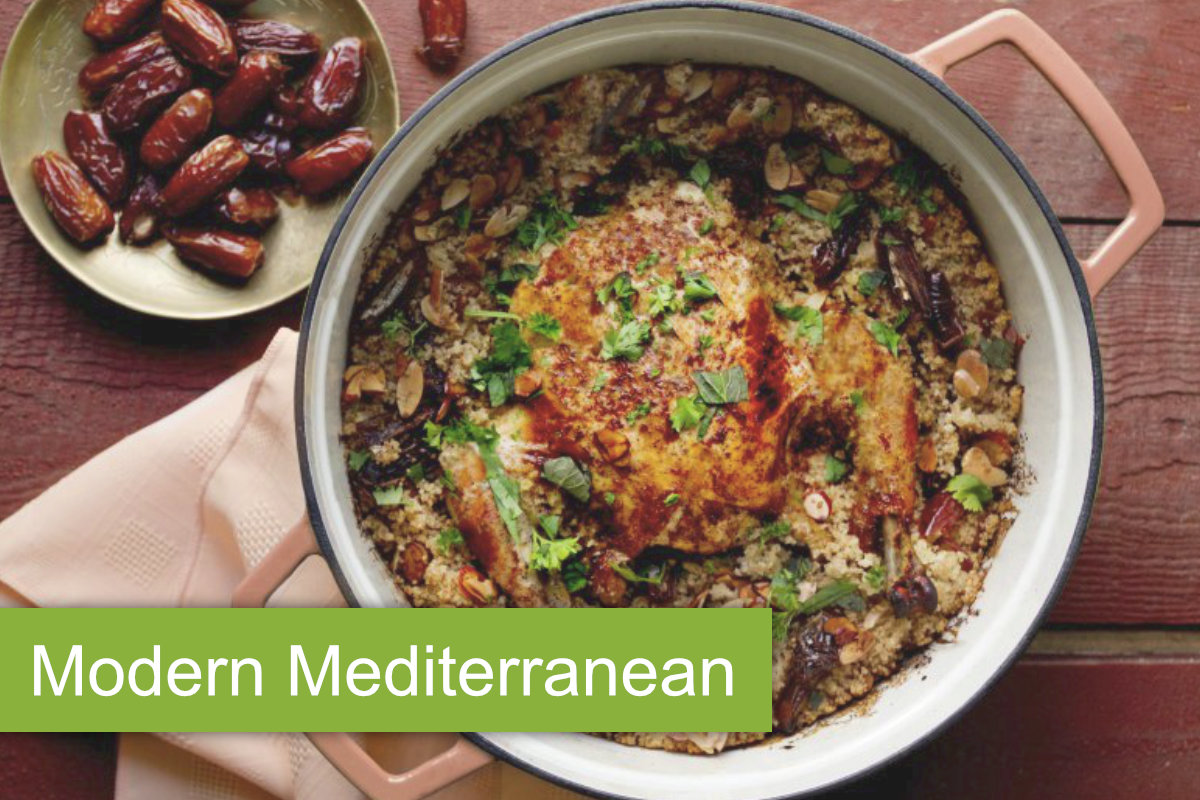 Middle Eastern flavors and ingredients are becoming more familiar — and more desirable — to consumers, Mintel said. Sixty-six per cent of U.S. consumers are interested in Middle Eastern foods at restaurants, and growth of Middle Eastern cuisine on U.S. restaurant menus grew 32% between 2015 and 2017.

Dates, a staple in Mediterranean fare, increased 19% as an ingredient in menu items from 2015-17, according to Mintel Menu Insights Dates also have been growing as a component of non-alcoholic beverages, Mintel said.

Another Middle Eastern cuisine ingredient, pistachios, grew 15% as a food ingredient and 2% as a food flavor between 2015-17. 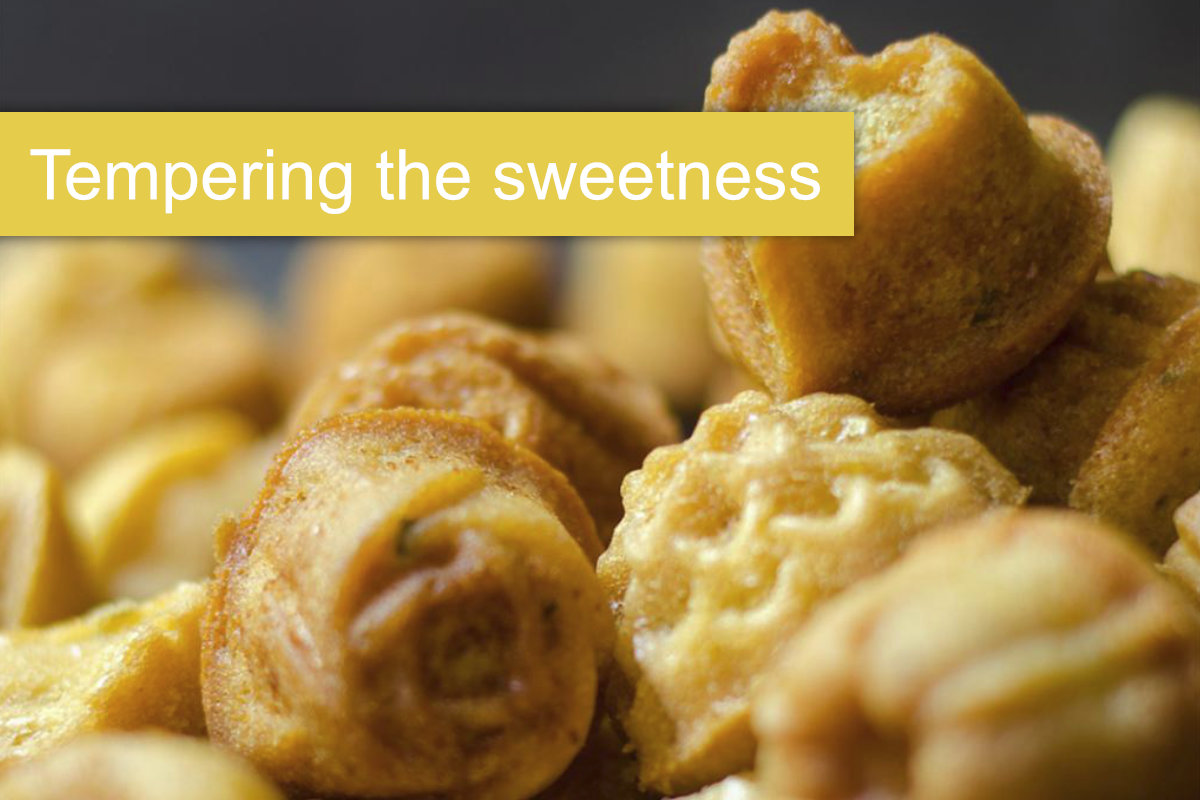 Savory and tart flavors increasingly are popping up on menus as a way to offset the sweetness in desserts and baked foods, Mintel said.

“As diners often aim to strike a balance between health and indulgence, desserts are paired with flavors that temper their overall level of sweetness,” Mintel said. “While they may sound odd on paper, flavors like olive oil and vinegar are growing specifically as dessert flavors.” 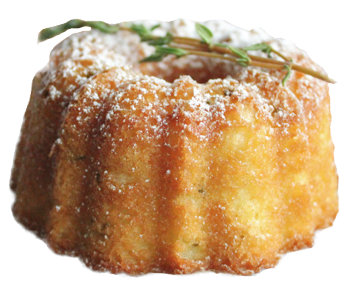 Olive oil as a flavor in desserts grew 16% between 2015 and 2017. Vinegar also has started to climb as a dessert flavor, Mintel said. Fifteen per cent of consumers said they are interested in bakery items featuring savory flavors, such as rosemary olive oil cakes from Los Angeles-based Osteria Mozza or Cheerwine vinegar pie from Comfort restaurant in Richmond, Va.

The desire to diminish food waste also has led to more tart flavors appearing in desserts to balance sweetness.

“Chefs are increasingly creating housemade vinegars from fruit and vegetable scraps, turning food waste into tart, flavorful elixirs that they add to salads, mains, and even desserts,” Mintel said.

Flavors such as lemon and passion fruit increased on menus 9% and 15%, respectively, Mintel said, and the two are some of the top growing flavors according to Mintel Menu Insights. 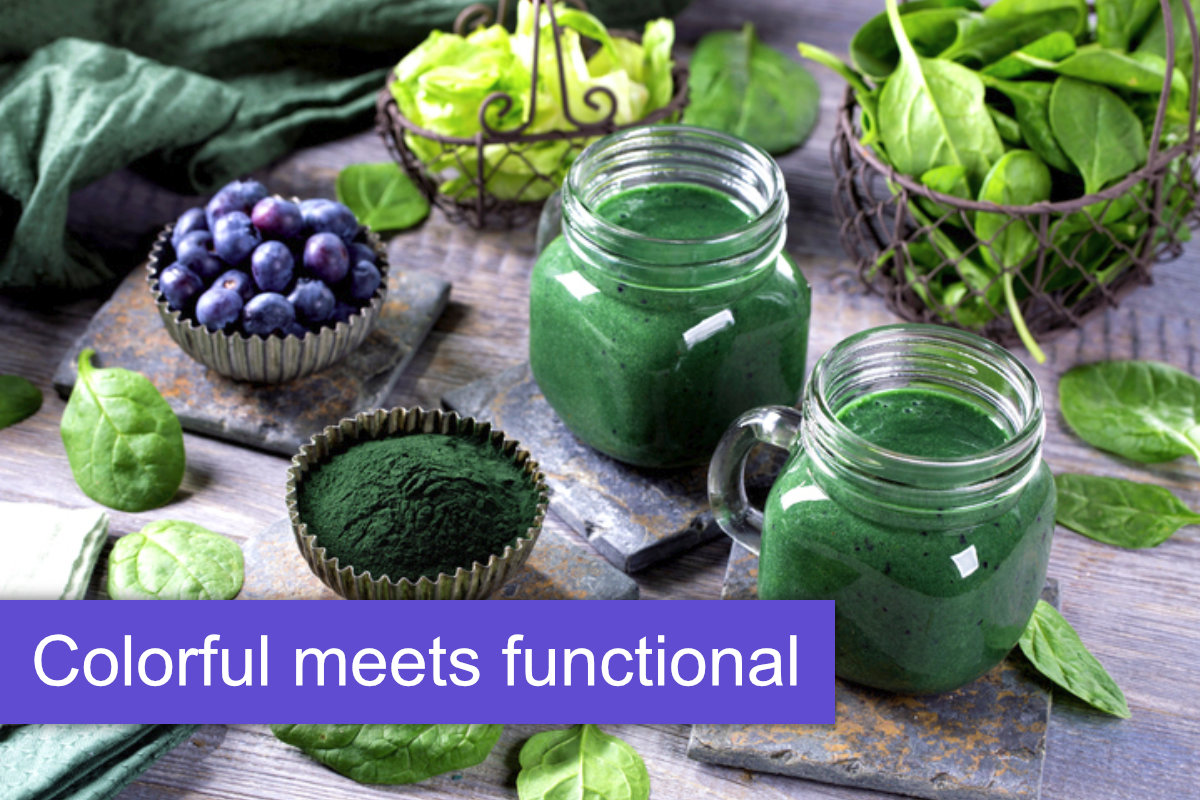 Flavor ingredients that add both color and healthful appeal to dishes are growing in popularity on menus. Fifty-one per cent of consumers are willing to try an unfamiliar ingredient if it provides a functional benefit, Mintel said, and color ups the appeal even more.

Ube, for example, is a purple yam that is popular in Filipino cuisine and lends antioxidants and vitamins to dishes. The ingredient adds a touch of purple to menu items, including desserts and beverages. For example, Warm Belly Bakery in Chicago offers an ube cookie with frosting and coconut flakes. 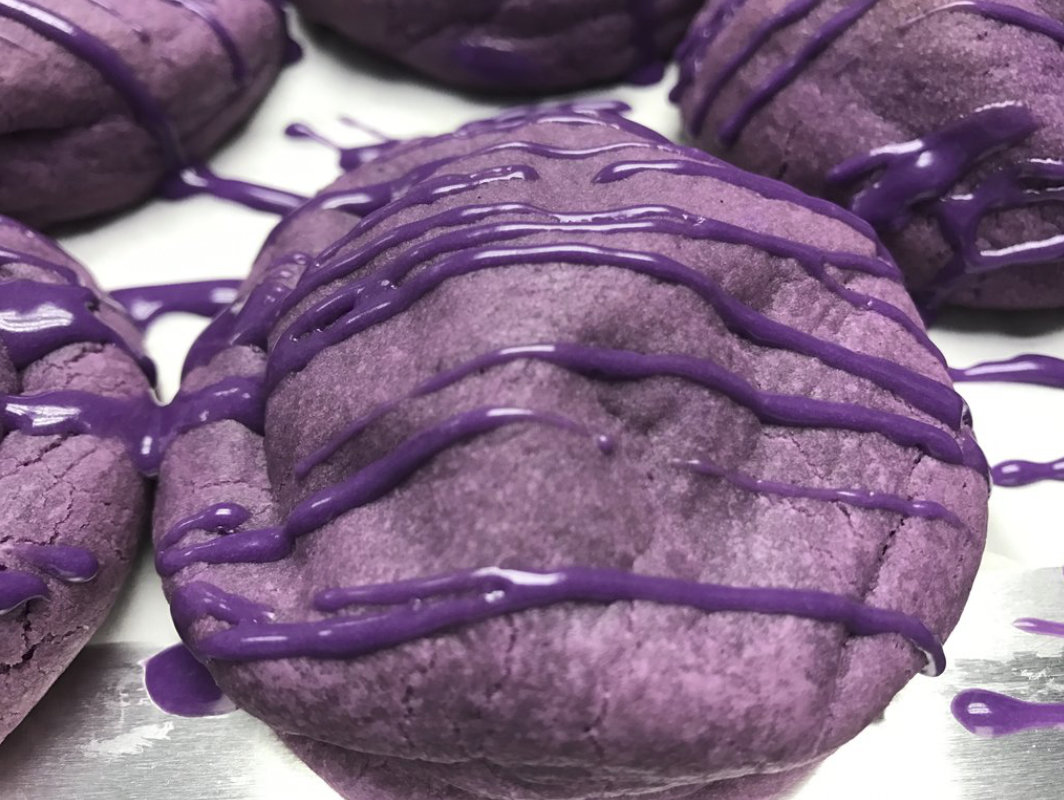 Black garlic, which often appears in ramen broth, adds antioxidants and a darker color to foods. The ingredient is making its way onto more menus, Mintel said, increasing 13% from 2015-17.

Sumac, a dried and powdered fruit of the Rhus coriaria plant, is used as a spice in Middle Eastern and South Asian cuisine that adds antioxidants, protein and a pop of reddish purple to dishes. Instances of sumac on menus grew 34% between 2015 and 2017, Mintel said.

Algae, which Mintel said is considered a superfood, adds antioxidants, protein and a green hue to foods and beverages. Nineteen per cent of consumers said superfood claims encourage them to order a dish or drink from a restaurant. The smoothie chain Juice It Up! incorporates spirulina, a blue-green algae, into its Blue Vitality Smoothie Bowl. 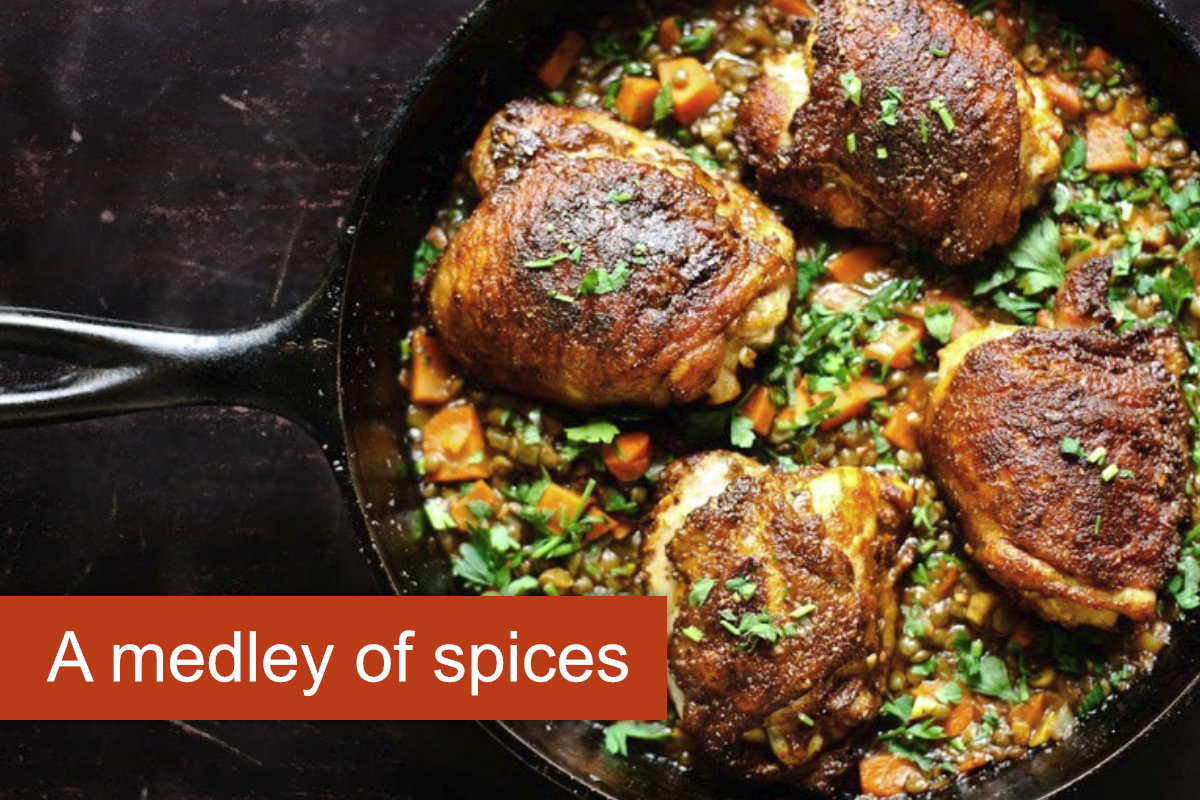 A medley of spices

Spice blends allow consumers to experience global flavors in a more familiar format, Mintel said. These blends may emerge from a variety of cuisines, including African, Middle Eastern, and Asian.

“Spice blends create an easy way for operators to introduce diners to new international cuisines in an approachable way, while letting chefs experiment with personalizing classic blends to reflect their vision and interpretation,” Mintel said. “While the components that make up each blend can differ, what remains constant is the sheer versatility of each spice blend with various foods.” Berbere, an Ethiopian spice blend, combines spices such as ginger, basil, chili peppers and garlic. While traditionally used to season various ingredients in stews, such as beef, chicken, lentils and eggplant, berbere may be used in a range of applications. Cicchetti, a Mediterranean restaurant in Seattle, serves berbere fried chicken wings with turmeric aioli.

Ras el hanout, a spice mix from North Africa, typically includes spices such as cardamom, cumin and ginger. It appears on the menu at The Painted Lady in Newberg, Ore., in the restaurant’s slow-roasted salmon. The blend has potential for growth, Mintel said, as 32% of consumers are interested in seeing more African seasonings in foods.

Togarashi is a common Japanese spice blend that is often included in soups and proteins. The ingredient has grown 9% on menus from 2015-2017, Mintel said.

“Spice blends in particular are an area of opportunity for brands as they can take some of the guesswork out of cooking,” said Caleb Bryant, senior food service analyst for Mintel. 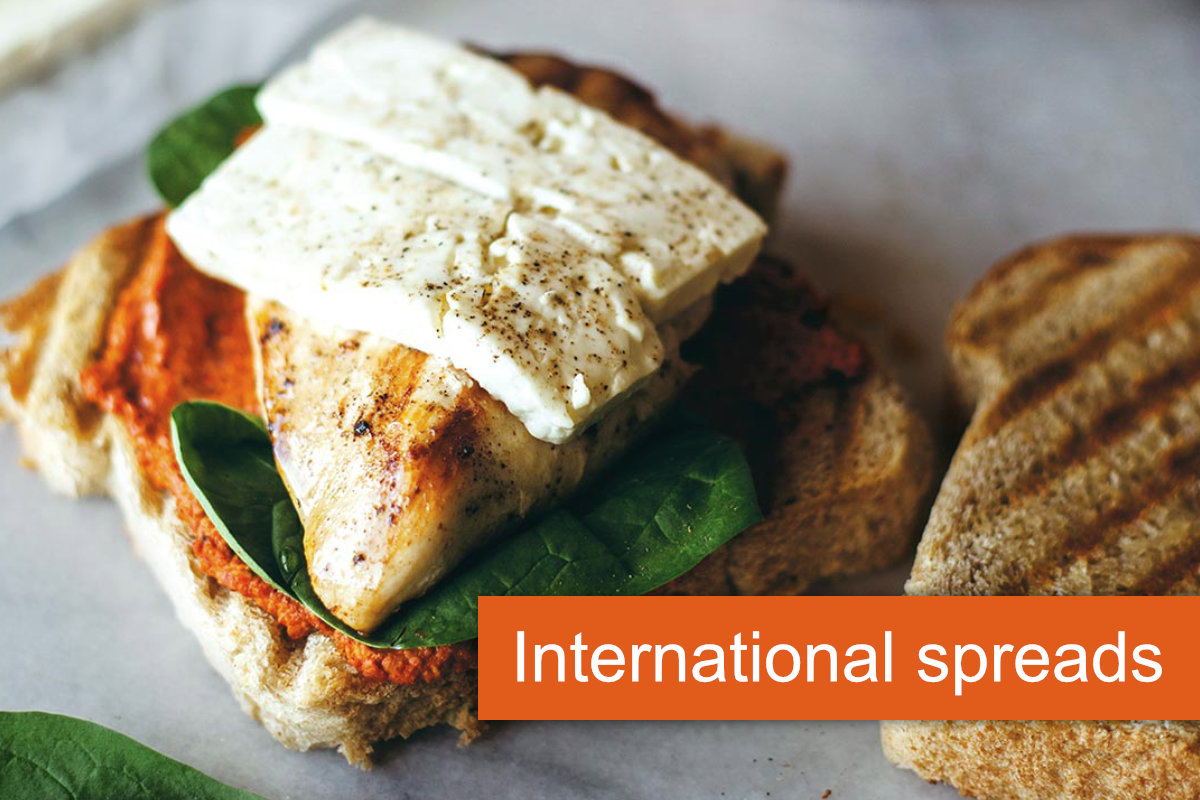 Sauces and condiments also provide an approachable avenue for consumers to try new flavors. Twenty-two per cent of U.S. diners said they would be motivated to try an unfamiliar flavor if it is paired with a familiar format, Mintel said, and 28% of condiment shoppers said international varieties help them experiment with new cuisines.

Consumers are interested in seeing more international sauces and condiments in foods, Mintel said. Forty-nine per cent said they would like to see more Indian flavors, 33% Middle Eastern flavors and 25% African flavors. 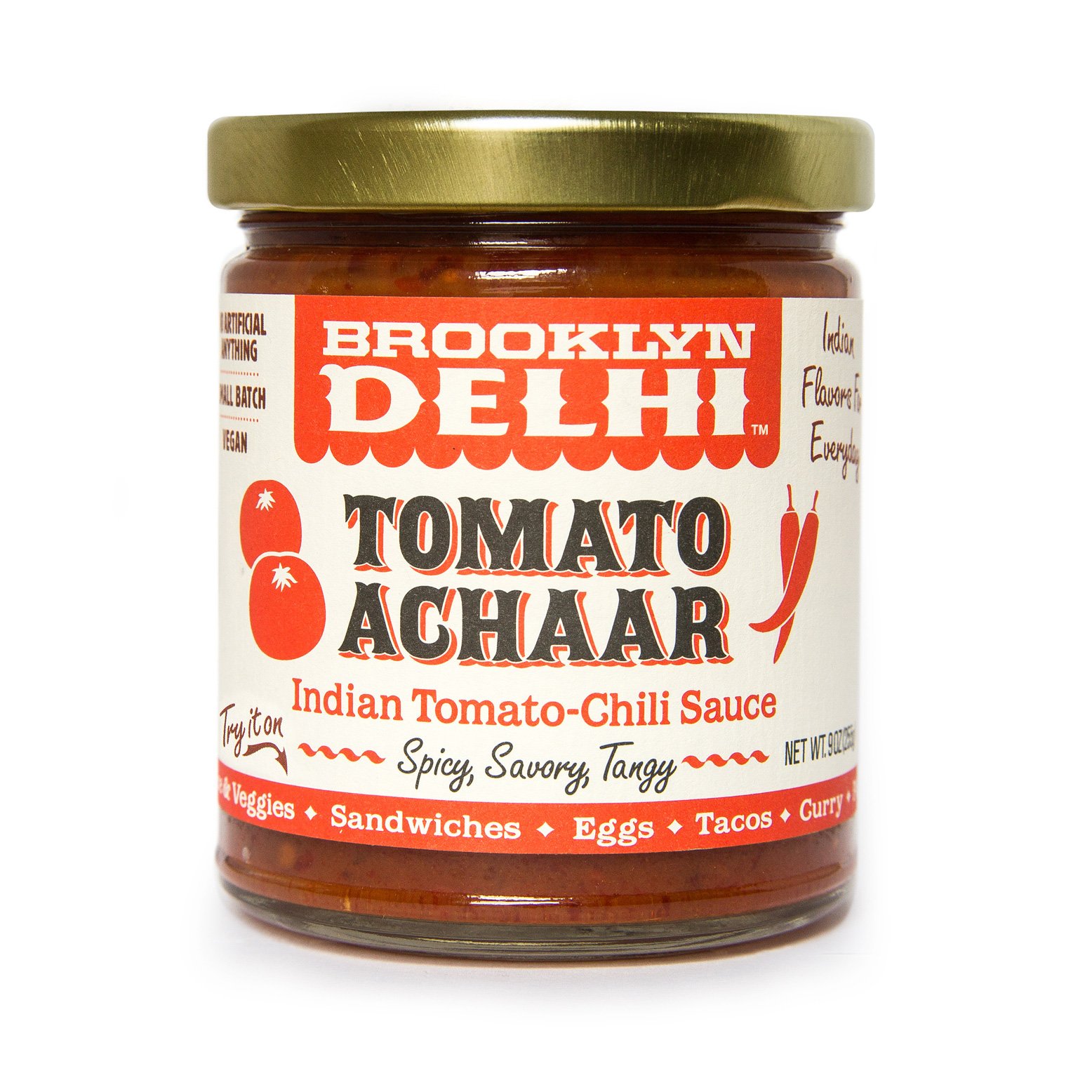 To appease those seeking Indian cuisine, restaurants may use Achaar. This Indian condiment is made by blending various pickled vegetables, spices and oils. Brooklyn Delhi embraces the flavor in its Tomato Achaar, a tomato relish made from local vegetables, fruits, spices and oil.

“As an appetizer, a dip or spread is shared among friends, meaning each diner signs up for just a taste of the dish — a low-risk proposition,” Mintel said. “A sauce or condiment served on a sandwich or with a protein, meanwhile, takes a familiar dish and adds a bit of interest, giving diners confidence in trying something new. It may not be surprising, then, that a range of international flavors, including those of the Middle East and Africa, have found their way into consumers' consciousnesses through their inclusion in dips, spreads, and sauces.” 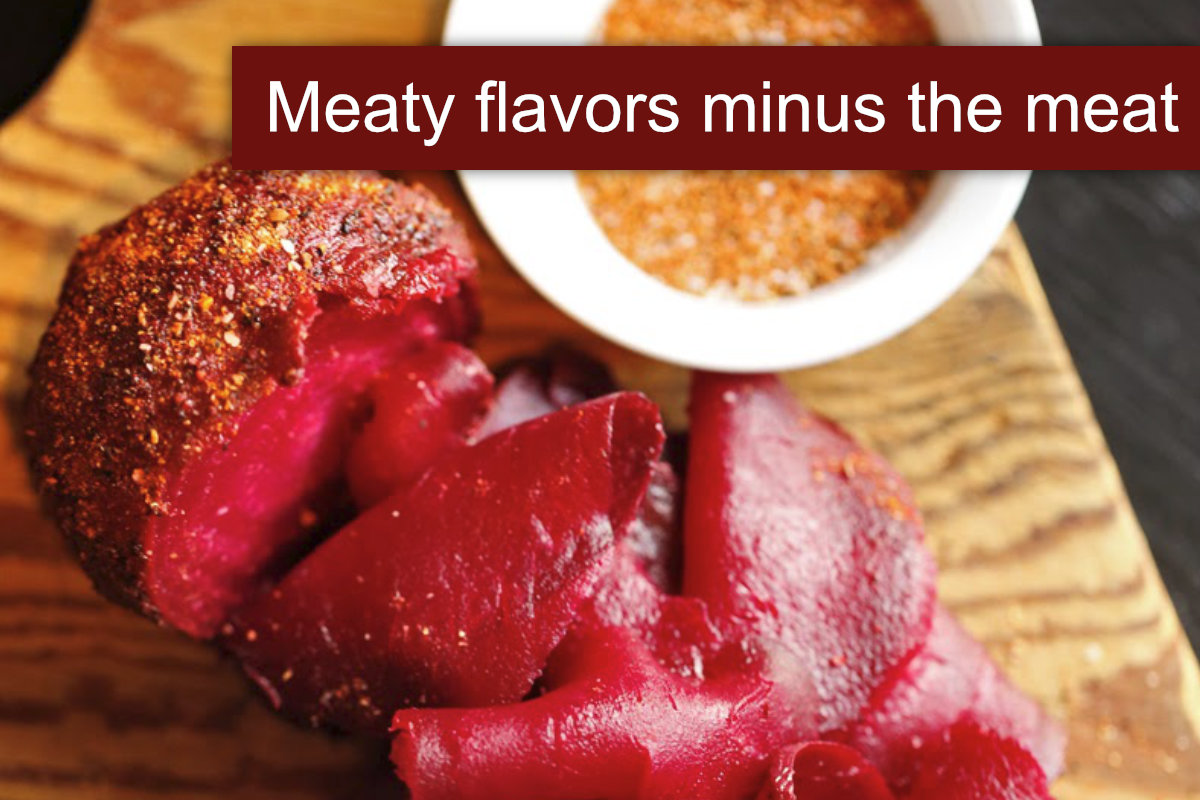 Meaty flavors minus the meat

The shift to more plant-based alternatives has led to a desire for meaty flavors without the actual meat, Mintel said.

“Diners still crave the savory flavors they find in meat products,” Mintel said. “These flavors can be achieved through the same methods that are typically used to cook meats, such as curing, grilling, and smoking. Specific preparation methods can turn ordinary ingredients into suitable meat alternatives.”

Smoked is one of the fastest growing food flavors, Mintel said, and it has begun to branch beyond meat and into fish, beans and vegetables. “Smoked” as a flavor increased 5% on menus from 2015-17.

Restaurants also may use seasonings typically associated with red meats, such as pastrami spices, to suggest meaty flavors in ingredients like fish and vegetables.

One plant-based option is Ahimi, an alternative to tuna that is made from tomatoes. Tomatoes contain glutamic acids, which provide the savory flavor of meaty foods. 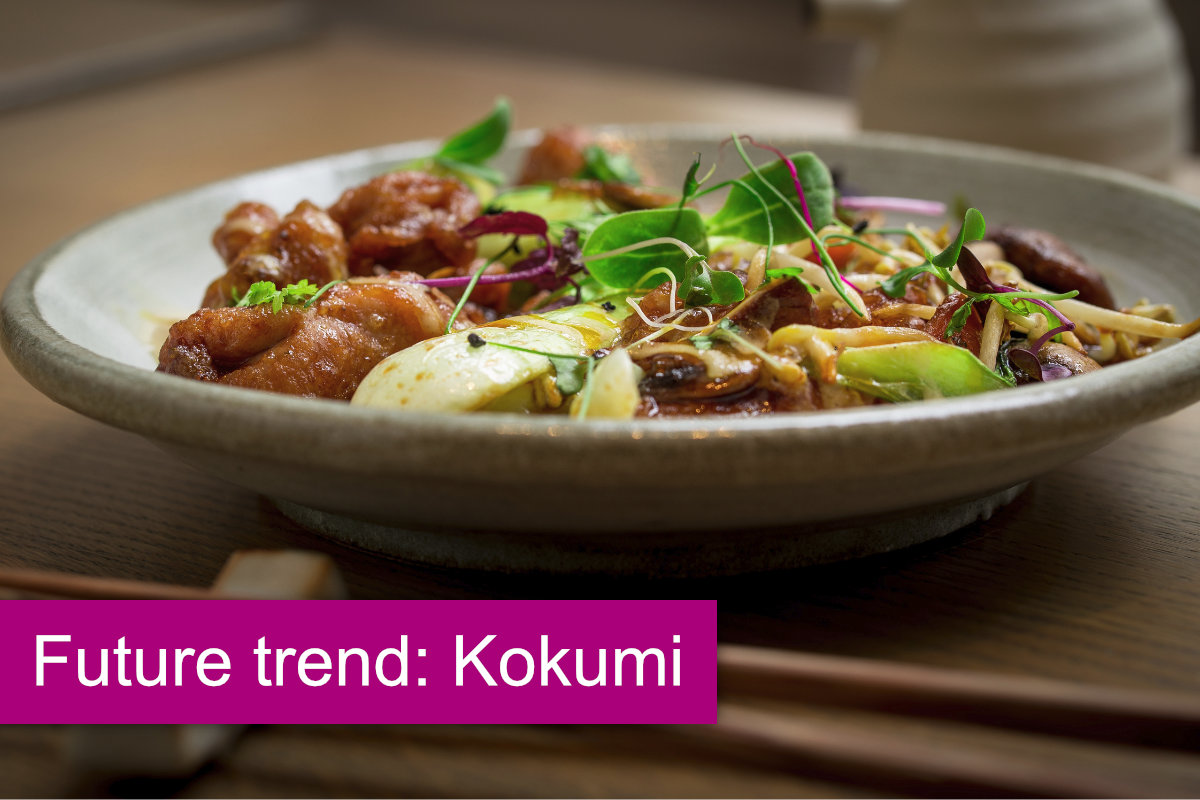 In the past few years, consumers have become more and more aware of umami as the fifth taste. The savory flavor is abundant in high-glutamate foods such as tomatoes, meat and soy and has even showed up in restaurant names, such as Umami Burger.

Kokumi, translated from Japanese as “delicious,” provides a sense of balance and harmony in foods, Mintel said. The taste concept is associated with flavors achieved by slow-cooking, aging and ripening. It may be defined as a sense of richness, heartiness and complexity.

Ippudo, a New York-based ramen restaurant, offers a Miso-Glazed Hoku Hoku Potato dish that is high in kokumi. It includes potatoes, avocado, eringi mushrooms and tofu tossed in a spicy miso butter sauce all topped with a poached egg and cilantro. 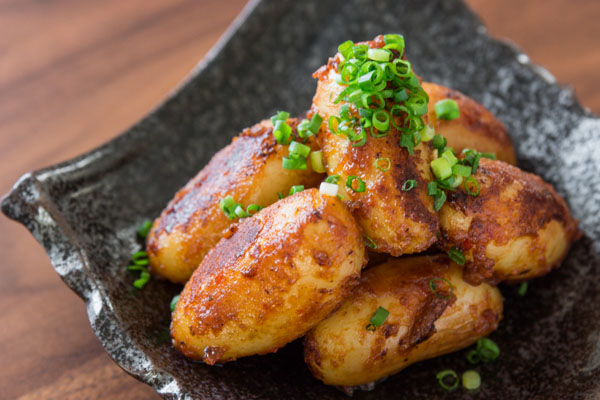 “Kokumi can work synergistically with umami flavors as well as improve other attributes,” said Stephanie Mattucci, associate director of food service for Mintel.

Convincing consumers to accept the kokumi flavor profile may come down to how it is described in the menu, Mintel said, as 44% of consumers said they would be motivated to try an unfamiliar flavor if it has a detailed flavor description on the menu.

In the next five years, Mintel expects more chefs and scientists to turn to kokumi to create complex flavors. Yeast extract and fermented soy are kokumi-boosting ingredients that may be added to replicate the flavors of slow-cooking, add oiliness and richness to lower-fat foods and retain the salty sensation in reduced-sodium snacks.

“Operators should think about ways they can boost the overall deliciousness of their dishes while creating healthy offerings consumers are craving,” Mintel said. “We will see further research provide future operators with more tools in their arsenal to create the taste and mouthfeel of slow-cooked foods without the time investment.”