We use cookies to provide you with a better experience. By continuing to browse the site you are agreeing to our use of cookies in accordance with our Cookie Policy.
Skip To Content
Home » New twists on old ideas defining the future of food

New twists on old ideas defining the future of food

CHICAGO — Corporate executives, capital investors and financial advisers in the food space gathered on April 19 to hear food and beverage industry experts and entrepreneurs discuss the changing dining landscape and the future of food. The half-day conference was hosted by the Association for Corporate Growth (A.C.G.) Chicago, a network of more than 12,000 decision-making professionals in business development.

“Health and wellness is in everything,” said Lynn Dornblaser, director of innovation and insight, Mintel, Chicago. “But remember taste reigns.

“Our research showed that 62% of U.S. consumers believe the fewer ingredients in a product, the better it is for you. That must mean my favorite food is a health food because it’s made with simply potatoes, oil and salt.”

Ms. Dornblaser’s comments set the stage for a number of innovators to share their stories.

Farmer’s Fridge has been providing Chicagoans better-for-you fresh food through vending machines since 2013. The company recently moved into the Milwaukee market. Founder and chief executive officer Luke Saunders said the idea behind the company is to make fresh food more accessible than a bag of chips or candy bar.

The vending machines are restocked daily with items for breakfast, lunch and dinner, all hand prepared and packaged at a commissary kitchen located in the Fulton Market district of Chicago. All items were developed by a chef and registered dietitian and are constantly changing. Nutrition information is available on the company’s web site and app. 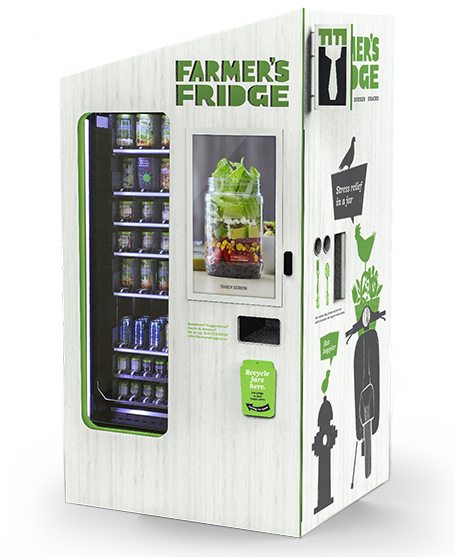 Farmer’s Fridge machines use touch-screen technology that works in conjunction with the app. The software lets customers check inventory at nearby machines and customizes rewards based on their purchasing habits. Meals include pasta and rice bowls, salads and sandwiches, some with cheese, eggs, fish or meat, others are vegan. There is also a range of snacks, such as hard-boiled eggs, cheese chunks, diced chicken breast and vegetables with hummus. Sweet and salty treats include trail mix, seasoned nuts and pudding or yogurt parfaits. The machines also carry sparkling waters, kombucha and ready-to-drink lattes. Prices for the salads and meals range from $4 to $12.

“Consumers have 24-7 access to foods they can trust. All the food is currently made in one place, but you have the same experience no matter where you eat it.”

The vending machines feature products with a shelf life of 24 to 48 hours. All unsold items are donated to local food pantries. The company sources organic and local ingredients when possible.

Farmer’s Fridge developed from a need Mr. Saunders identified in the fresh convenience food space while he was a traveling salesman in 2009. He set up his first vending machine in 2013 in a now-closed food court in downtown Chicago, and since has been able to place Farmer’s Fridge machines in Northwestern Memorial Hospital, O’Hare International Airport and other business and residential locations throughout the city.

Ken Plasse, c.e.o. of Fishpeople Seafood, Portland, Ore., shared the mission of his company, which was founded in 2012 to “re-imagine North America’s relationship to the sea.” The company’s passion for sustainability is helping restore habitats and peace-of-mind to seafood lovers nationwide. 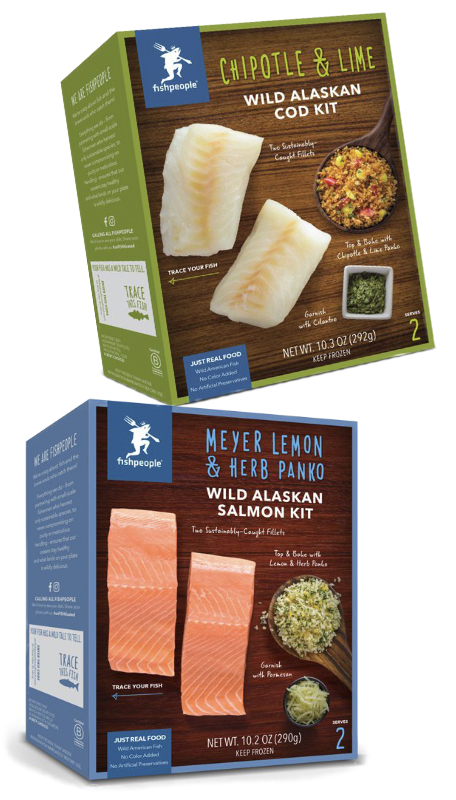 All of Fishpeople’s seafood is responsibly sourced and sustainably caught in the Pacific Northwest by independent fishermen, he said. Packages provide the story of the place where the fish was raised. For more information, consumers may use a tracking code on a package to learn about where the fish came from, how it was caught and the full journey from waters to package.

The company recently introduced a line of seafood kits designed to make cooking seafood at home less intimidating. Each kit comes with two fish fillets, a topper and garnish, a moisture lock tray and foil, and step-by-step instructions for foolproof results every time. Dinner is ready in less than 20 minutes.

Seth Goldman, co-founder of Honest Tea and executive chairman of Beyond Meat, El Segundo, Calif., compared the similarities of the “tad sweet” ready-to-drink brewed tea he developed in 1998 and the meat alternatives he currently is involved with.

“It’s the undoing and redoing of food,” he said. “With Beyond Meat, we rebuild the structure of meat from plant materials.

“On a good day, 5% of shoppers are vegan. They shop frozen for their meat alternatives. If we want to build this business, we need to appeal to the 95% of non-vegan shoppers. This is why our products can be found in the refrigerated meat department.”

He explained the merchandising approach was not well received by some vegetarians who feel like shopping the meat department is “like going into Death Valley.”

“Some retailers will dual merchandise,” he said. “But we believe our future is in the meat department.”

Introduced in 2016, the Beyond Burger looks, cooks and tastes like ground beef but is made from plants, with no bioengineered ingredients, soy or gluten. It is currently sold in more than 5,000 stores and served in nearly 4,000 restaurants, hotels and food service outlets. 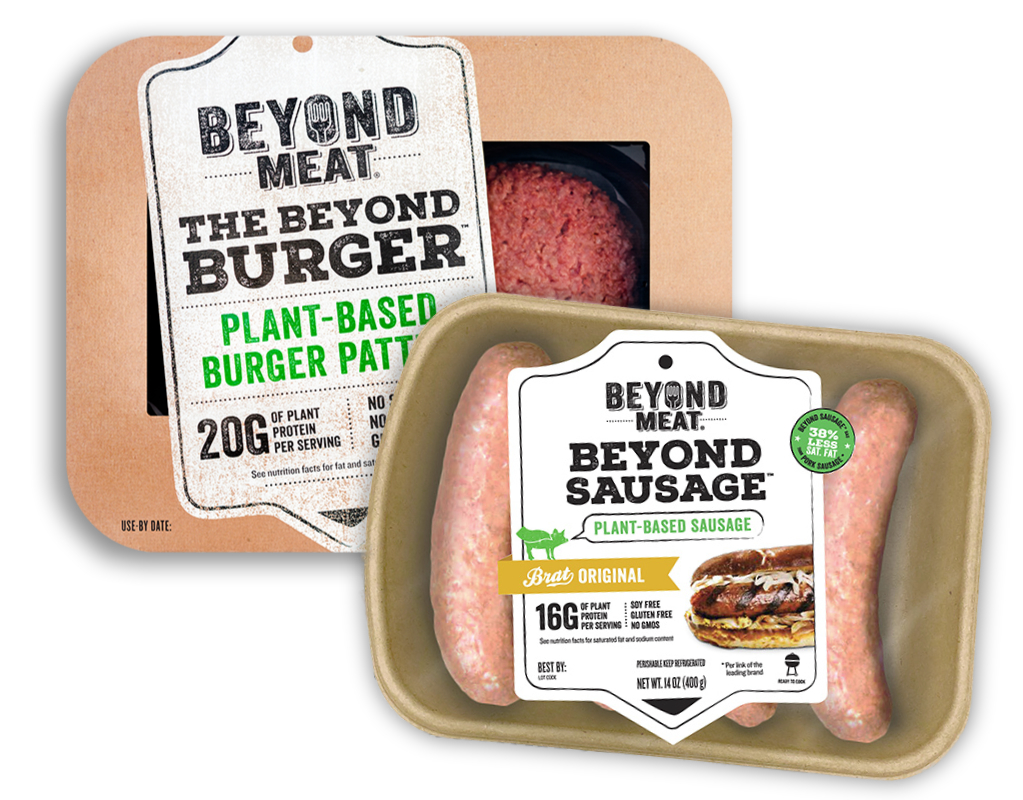 The company is currently introducing nationwide its new Beyond Sausage, a plant-based alternative that looks and cooks like pork sausage in three varieties: bratwurst, hot Italian and sweet Italian. With more protein and less fat than traditional links, Beyond Sausage is made with pea, fava bean and rice protein with trace amounts of beet for color, coconut oil for juiciness and an algae-based casing. Like the company’s Beyond Burger, Beyond Sausage features a proprietary approach to braiding and binding proteins, fats, minerals and water to recreate the architecture of meat.

In December 2017, Beyond Meat announced the close of a $55 million fundraising round led by Cleveland Avenue, L.L.C., a venture capital firm founded by Don Thompson, former chief executive officer of McDonald’s Corp., with additional investment from Tyson Foods Inc., Chicago. The company said it plans to use the funding to more than triple its production footprint, support research and development and expand sales and distribution.

Another vegan protein player, this one developing seafood alternative, provided attendees a preview of its products, which are slated to enter the market in the first quarter of 2019, upon completion of production facility in Ohio. Good Catch focuses on seafood without sacrifice, said Eric Schnell, co-founder and co-c.e.o.

The Good Catch line will include everything from fish-free tuna and burgers to crab-free cakes, all produced with nutritious, sustainable ingredients.

“The recipes are based on six varieties of beans,” he said.