QUINCY, MASS. — Bay State Milling Co. long has charted a distinctive course within the flour milling industry. In the 1980s, it was a focus on destination milling. In the 1990s, it was a shift toward sacked flour. More recently it has been major bets on health and wellness.

The company’s headquarters in metropolitan Boston is situated about a day’s walk from Walden Pond, the site of inspiration for Henry David Thoreau’s famous 1854 paean to the man who marches to the beat of “a different drummer.”

“This is very much a business in transformation,” he said in an interview with Food Business News. “We are trying to transform ourselves into a more specialized processor of plant-based ingredients that our customers will trust to manage more complex supply chains.”

In the interview, Mr. Levangie described how a series of steps Bay State has taken over the past decade are coming together to fundamentally change the company in a way to position it for success in the 21st century.

Underpinning the company’s determination to transform are two inter-connected premises. First, the milling industry’s principal product — bulk enriched flour — continues to be priced as a commodity rather than as a value-added product. Second, the health and wellness movement is a powerful trend but one that increasingly appears to be avoiding conventional varieties of wheat, including whole wheat flour, as ingredients for snacks, bars and other fast-growing product categories. Bay State’s transformation has led the company to large non-wheat investments in ancient grains, seeds, spices and a range of other products, and varietal-specific wheat-based solutions.

“Bay State has always been this inquisitive, trying-new-stuff kind of company,” Mr. Levangie said. “The focus has been trying to find areas of differentiation, specialization. Brian and Buck (Brian G. Rothwell, vice-chairman, and Bernard J. Rothwell III, chairman) tell me stories about how their father, Bernard Rothwell II, would question them constantly about how they were making the business different.”

In Bay State’s long history of iconoclasm, Mr. Levangie is a relative newcomer and the first Bay State c.e.o. who is not part of the Rothwell family that has owned the company since its start in the 19th century. A native of Dedham, Mass., 10 miles west of Quincy, Mr. Levangie holds a bachelor’s degree from Dartmouth College, Hanover, N.H., and a master’s in business administration from Harvard University, Boston. Mr. Levangie spent six years with Cargill before joining EFS Network, an on-line start-up established by a consortium of companies, including Cargill. He joined Bay State in 2004 and was named c.e.o. in 2016, succeeding Brian Rothwell, who held the position for 30 years. Mr. Rothwell is now vice-chairman of the board. His brother Buck Rothwell is chairman. Mr. Levangie described his mandate as building a robust bridge for the company to the fifth-generation of family owners, some of whom are now working in the business.

Part of Mr. Levangie’s determination to move into value-added ingredients reflects his view of the flour milling industry in contrast to oilseed processing, where he began his career.

“Flour milling is a really complicated business versus crushing a soybean,” he said. “And when I started, we weren’t getting paid nearly enough for the value that we are delivering. Flour is such a functional ingredient.”

He said his timing in joining the business in the early 2000s was fortunate.

“A number of other companies were making management shifts or changes,” he said. “They started to run their businesses differently.”

Consolidation early in the 2000s helped, but other changes have been significant as well.

“When I first started, you could see the influence of the grain business over things like pricing at one major milling company,” Mr. Levangie said. “They would try to merchandise their way out of a grain position through the flour milling business. I’m not saying they were making bad decisions, maybe that was the best thing. But it made the flour milling business more of a commodity business than I think was warranted. But as the industry changed, this changed.”

“One thing specific to Brian but really across Bay State has been a discomfort with the status quo and a willingness to learn,” he said. “Brian is a really intellectually curious person, and that is something that is magnetic. What I mean is we tend to attract people interested in new things, exploring. That quality, in combination with a willingness to see the long term, affords us the opportunity to experiment, innovate and differentiate.” 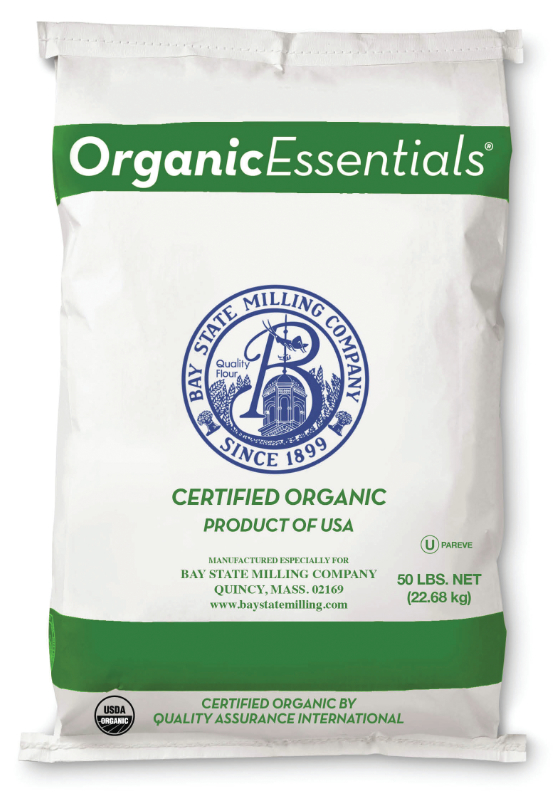 Among avenues for differentiation Bay State has pursued over the past generation, organic and whole wheat milling were among the first. About 20 years ago, the company acquired a stake in Rocky Mountain Flour Milling in Platteville, Colo., an organic flour mill. In 2010, Bay State bought out the mill’s other shareholders.

As the business ramped up production, the Colorado facility milled both conventional and organic wheat. In recent years that mix has tilted increasingly toward organic, much of which is contract grown.

“We’ve had to go a little farther afield due to the growth of the business and to manage the product line,” Mr. Levangie said. “We make a lot of different types of flour there. We have a soft wheat program so you’re originating from some other regions just to access the right kind of grain. We do spelt there, too.”

While pleased with the company’s progress in organic milling, Mr. Levangie struck a more ambivalent tone discussing the market for whole wheat flour. In the 2000s, the whole wheat flour market appeared promising.

“During the Atkins phenomenon, there was a rippling effect, and you saw growth in whole wheat flour,” Mr. Levangie said. “We happened to be in it, and it was very small at that time. But it was kind of a niche thing that we did, and that business really started to grow. Then the 2005 dietary guidelines gave that another lift.”

“We had hoped that whole wheat would offer more growth, but the whole wheat path has been tough,” he said.

Elaborating, Mr. Levangie said the consumer for many years appears to have been pushing back against whole wheat products, particularly related to taste. Whole wheat presents functionality challenges for users, which translates into higher costs, he added.

“Leaving the bran in flour largely undermines one of the principal functional aspects of flour, which is the ability to produce a gluten network, allow bread to rise, etc.,” he said. “Like a lot of other millers, we are really focused on trying to improve our whole wheat product line. There’s still some growth there with a lot of headroom between half our grains being whole. I’m increasingly less confident we are going to get there.”

As a result, Bay State is exploring other avenues for growth, Mr. Levangie said.

“About seven years ago, we said we’re not sure that wheat alone is a big enough sandbox for us to differentiate ourselves,” he said. “This is before the rise of gluten-free, so we were not chasing that, but we just began pursuing some other ingredients.”

The initial pursuit beyond the flour milling sandbox emanated in part from an earlier wheat-based investment — the bakery mix market. In 2007 Bay State acquired Premier Blending, a blending business based in Wichita, Kas.

Mr. Levangie described Premier as an “opportunistic investment” and said Bay State concluded the acquisition “demonstrated that the room for differentiation in bakery mix was narrow for us.”

That said, Premier had strong product development resources helping provide Bay State with that capability, which has proven valuable over time across the company’s range of business.

“There are a lot of really good competitors in the dry mix, flour base blending business, and we just didn’t feel like we had a ton to add there, but we learned a lot,” he said. “But that’s when we started actually working with other grains. We said, the bet we’re willing to make is these alternative grains are going to become increasingly interesting to consumers and therefore our customers because some have some unique health properties, some have unique taste. What we’re really good at is connecting agriculture to food within seed-based, plant-based functional ingredients.”

Toward that end, Bay State in the last six years has acquired three non-wheat businesses, taken a stake in a fourth, launched still another and became a licensee for yet another.

Mr. Levangie was quick to note that this whirlwind of acquisitions required commitment from the company’s owners and board and was anything but a whimsical executive decision.

“The combination of dedicated owners with a long-term focus and the fact we have five independent professional directors and a willingness by both to allow management to regenerate the team often in front of the opportunity made many of these things possible,” he said.

As a result, beyond its basic flour milling products, the company now offers a full complement of ancient grains; sprouted rice, oats, quinoa, millet, garbanzo beans and amaranth; a range of grain blends (some with wheat, others gluten-free) used as inclusions; multi-grain and gluten-free flour blends; pizza dough and naan mixes; breading; naked oats (available as oat flour or rolled oats, regular or sprouted); baking spices; and a variety of seeds, from chia and caraway to sesame and sunflower. Many of the products offered are available both conventional and organic.

“T.J. Harkins was a transformative step for us but not a bridge too far,” he said. “They were selling three things to the grain-based food industry, in particular to a lot of bread bakers. They were selling seeds in grains that are often used in blends as toppings on variety breads and other breads. They did sweet spices. And it wasn’t yet a significant part of the product line, but the thing they had really gotten into early was ancient grains. So they were sourcing and milling all sorts of interesting grains and seeds.”

In addition to the Illinois acquisition, Bay State today operates or owns a stake in facilities (other than six wheat flour mills) in Woodland, Calif.; Yuma, Ariz.; Sterling, Colo.; and Saskatoon, Sask. The company is expanding capacity of its facilities in Woodland and Bolingbrook.

Bay State has integrated the various acquisitions into a new division — Mini-Milling and Blending (M.M.B.). The segment represents a significant part of Bay State’s overall business and is headed by David L. Sachs, vice-president and general manager. Mr. Sachs joined the company in April 2017. Before joining Bay State, he was at Keurig Green Mountain, Inc. for 5 years and was with Kraft Foods for 13 years before that.

In marketing its specialty products, Bay State reaches out both to its existing milling customers as well as grain-based foods companies that use little or no wheat flour.

“We have a broad customer base since, even in the wheat world, we do so many different things that we touch a lot of different parts of the grain-based food business,” he said. “There’s hardly a category that we don’t sell into. By getting into this M.M.B. business, we gain access to products like granola, nutrition bars, beverages and snacks. Aside from some pretzel business, we didn’t do a lot in the snacks, and wheat hasn’t been huge in snacks relative to corn. But snacks are certainly a growing part of the way consumers are eating.”

Notwithstanding its growth prospects, Bay State’s emphasis on the M.M.B. division should not be mistaken to mean the company is neglecting its core flour business, Mr. Levangie said.

“When we decided to move beyond wheat, what we weren’t doing was giving up on wheat,” he said.