We use cookies to provide you with a better experience. By continuing to browse the site you are agreeing to our use of cookies in accordance with our Cookie Policy.
Home » U.S. soybeans at risk in trade dispute with China

U.S. soybeans at risk in trade dispute with China

WASHINGTON — Seldom have farmers been faced with such a dilemma at planting time, which has a narrower-than-usual window this spring because of prolonged wintry conditions. This year, U.S. farmers who grow soybeans must decide if it’s worth the risk of planting amid a potential trade war with China that could send soybean prices sharply lower should it escalate beyond current rhetoric.

The importance of China to the U.S. soybean market can’t be overstated. U.S. soybean exports have nearly tripled from 22,889,280 tonnes in 1998-99 to 58,117,647 tonnes in 2016-17, according to the U.S. Department of Agriculture’s Foreign Agricultural Service. China accounted for the vast majority of that increase, buying 36,148,312 tonnes, or 62%, of the total in 2016-17. That was equal to 31% of 2016 U.S. soybean production. China’s demand for soybeans to crush for soybean meal to feed livestock has soared in recent years as the economy has grown and demand for protein, especially pork and poultry, has soared.

Weekly export sales of U.S. soybeans to China for the current marketing year have nearly dried up since the trade dispute escalated in April after the United States threatened to levy hefty duties on about $50 billion worth of imports from China. China indicated it would retaliate with new import duties on a wide array of U.S. goods, including soybeans. The United States then said it may consider new tariffs on an additional $100 billion worth of Chinese goods. Rather than face the prospect of paying those duties, Chinese importers have shunned new purchases of U.S. soybeans in recent weeks. It should be noted that there typically is a sharp decrease in Chinese buying of U.S. soybeans at this time of year as China switches to newly harvested South American supply during the six months before the U.S. soybean harvest begins in September.

U.S. exports of soybeans to China in March dropped 27% from the same month last year, according to U.S. customs data, while China’s soybean purchases from Brazil rose about 33%. In the last few weeks U.S. soybean sales to China have been nil, according to the U.S.D.A.

The latest round of talks between the United States and China on the trade issue ended with an agreement to talk more, which disappointed the market. 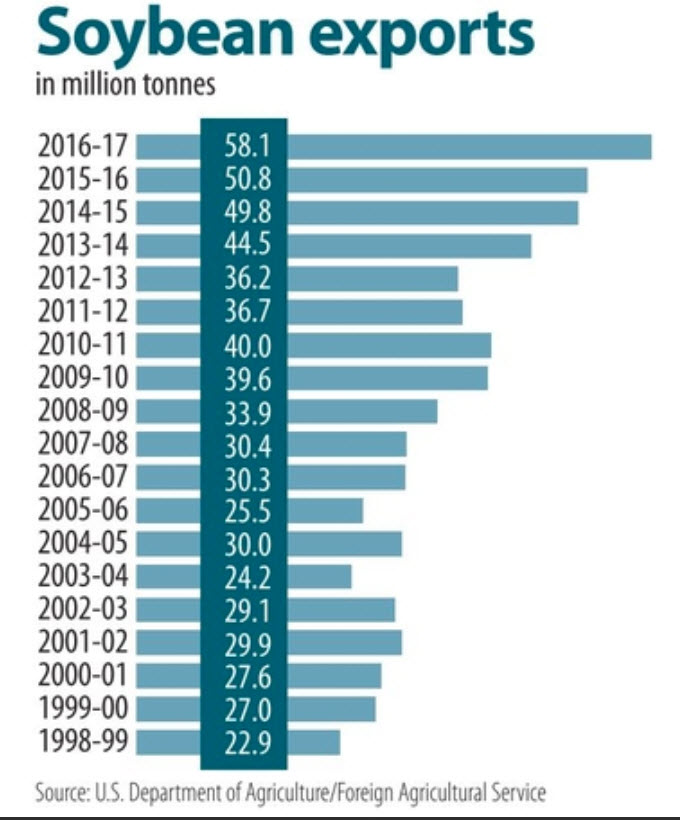 Soybean futures fell to one-month lows last week with trade concerns cited as a pressuring factor. Soybean (and corn) futures have seen wide fluctuations so far this year, mainly due to production concerns in Argentina (bullish for U.S. soybeans and corn) and trade issues with China (obviously bearish). Spot May soybean futures rose sharply from around $9.60 a bu in mid-January to a high above $10.80 a bu in early March before dropping back to just above $10 a bu last week.

China’s Ministry of Agriculture and Rural Affairs on May 10 forecast total 2018-19 soybean imports at 95.65 million tonnes, down 0.3% from 2017-18 and the first drop in 15 years. While the decline appears minor, the question is, where will those soybeans come from if a full-blown trade war with the United States ensues?

Brazil, the world’s second largest soybean producer after the United States and largest exporter (U.S. second), could fill some of the gap for China if U.S. soybean exports tank. Brazil’s 2017-18 crop was forecast at 115 million tonnes, a second consecutive record. While a jump in export demand may tax Brazil’s infrastructure and ports, it’s the only real alternative for China. Argentina, the world’s third largest soybean producer, has been plagued with weather woes this year, first with drought early in the season and then with heavy rainfall that is disrupting harvest. Argentina’s crop was forecast at 40 million tonnes in April, down 31% from 2016-17.

The U.S.D.A. in its March 29 Prospective Plantings report said farmers intend to plant 88,982,000 acres of soybeans this year, down 1% from record plantings of 90,142,000 acres last year and surpassing corn planted area by 1.1%, a rare occurrence. The soybean number always is somewhat tenuous because it often is the “go-to” crop in times of late planting. While that prospect loomed a few weeks ago, corn planting was quickly catching up with the average pace, which lessens the need to switch to shorter-season soybeans. This year, the decision may be more related to trade than to weather.