We use cookies to provide you with a better experience. By continuing to browse the site you are agreeing to our use of cookies in accordance with our Cookie Policy.
Home » McDonald’s gunning for the right balance

McDonald’s gunning for the right balance

NEW YORK — The successful embrace of technological change while still providing consumers the experience they demand will stand as the most important determinant of success in the food service sector over the next five years, said Stephen J. Easterbrook, president and chief executive officer of McDonald’s Corp., Oak Brook, Ill.

Warning that the restaurant business is overbuilt and is poised to become hypercompetitive in the years ahead, Mr. Easterbrook offered insights into the outlook during the Sanford C. Bernstein Strategic Decisions Conference May 30 in New York.

The observations came at the end of the discussion and were part of a spirited back and forth with Sara Harkavy Senatore, a senior research analyst at Bernstein.

Ms. Senatore asked Mr. Easterbrook to look five years in the future and identify what will be the single most disruptive force in the industry.

Mr. Easterbrook: “We will be.”

Ms. Senatore: “McDonald’s. That’s a good answer. Okay, so maybe what should your peers do?”

Mr. Easterbrook: “I wish them all the best.”

“I mean, the world has never moved quicker than it is today,” he said. “And you can see the bricks-and-mortar retailers are fighting hard to maintain their share and/or sometimes to survive. I think the restaurant industry broadly is slightly oversupplied at the moment. Whatever growth is coming out there typically is coming from new unit additions. That means people are losing volumes, and that equation never ends up in a happy place.”

Structural change in the industry inevitably will result with competitors fighting harder and harder to prevail.

“I think trying to get that balance right between the physical experience and the technological relationship — getting that balance right will ultimately shape the winners and the losers, and it’s something that we're very focused on,” he said. “We’re investing in both skill set and capability. And also just the fundamental technology platforms that we believe are going to help us become a winner in that fight. But I think the world will look a pretty different place in five years’ time.”

Mr. Easterbrook, who has been c.e.o. of McDonald’s since January 2015, has been credited with reigniting growth at the company. He noted the company has enjoyed 11 consecutive quarters of top-line growth. Many elements were incorporated into the company’s Velocity Growth Plan aimed at enhancing the customer experience, including the menu and customer engagement. Layered atop the plan were what Mr. Easterbrook called “accelerators,” that include initiatives around digital, home delivery and the modernization of McDonald’s stores around the United States. 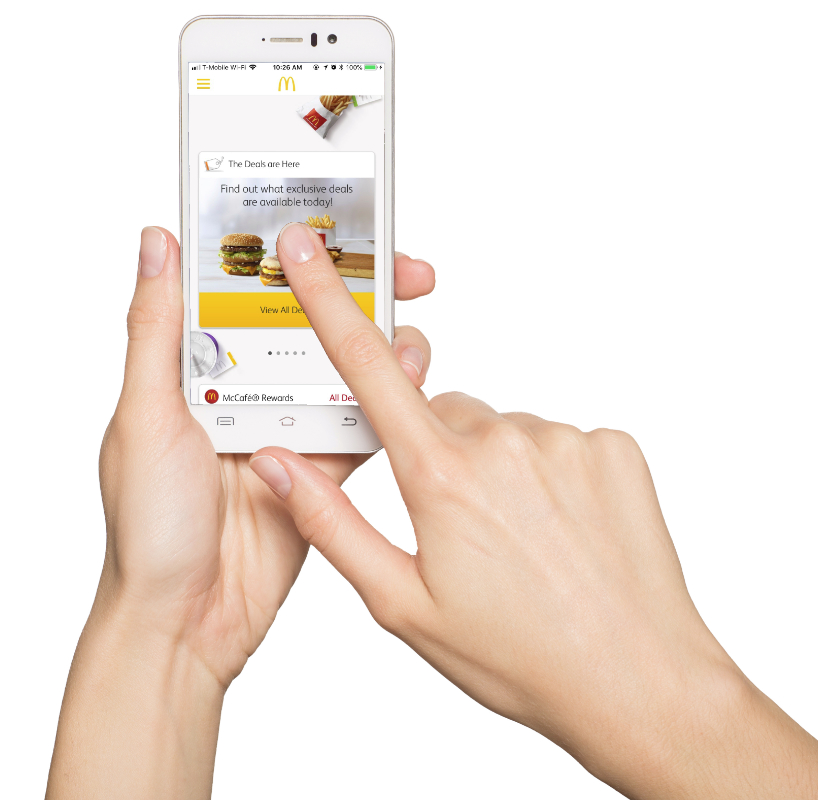 “You want that monthly average user number to keep growing, and you also want the frequency of this to engage with you through technology to increase,” he said.

As an example, the company is communicating about its everyday value meal offers through the app. McDonald’s continues to experiment with ways to “get that sweet spot” of regular engagement with consumers, Mr. Easterbrook said.

The parley with Ms. Senatore included considerable discussion about home delivery and restaurant updates, dubbed Experience of the Future.

The company has opted to use third-party services for its home delivery, principally UberEATS. Mr. Easterbrook said partnering with such services has allowed McDonald’s to deploy home delivery much more rapidly. Currently, a third of McDonald’s restaurants worldwide offer home delivery.

“It’s been a great business because it’s been incremental,” said Kevin M. Ozan, McDonald’s vice-president and chief financial officer, who also participated in the discussion. “In general it’s about 70% of incremental business.”

He noted that delivery is heaviest in the evening, which is when the company has excess capacity.

“So, that’s a big positive from an operational standpoint,” he said.

For the restaurant modernizations, the company is investing $1.5 billion in 2018 and a similar amount next year, when the initiative will approach completion. Features of the Experience of the Future include a self-order kiosk and cut-front counter. Mr. Easterbrook said about a third of stores 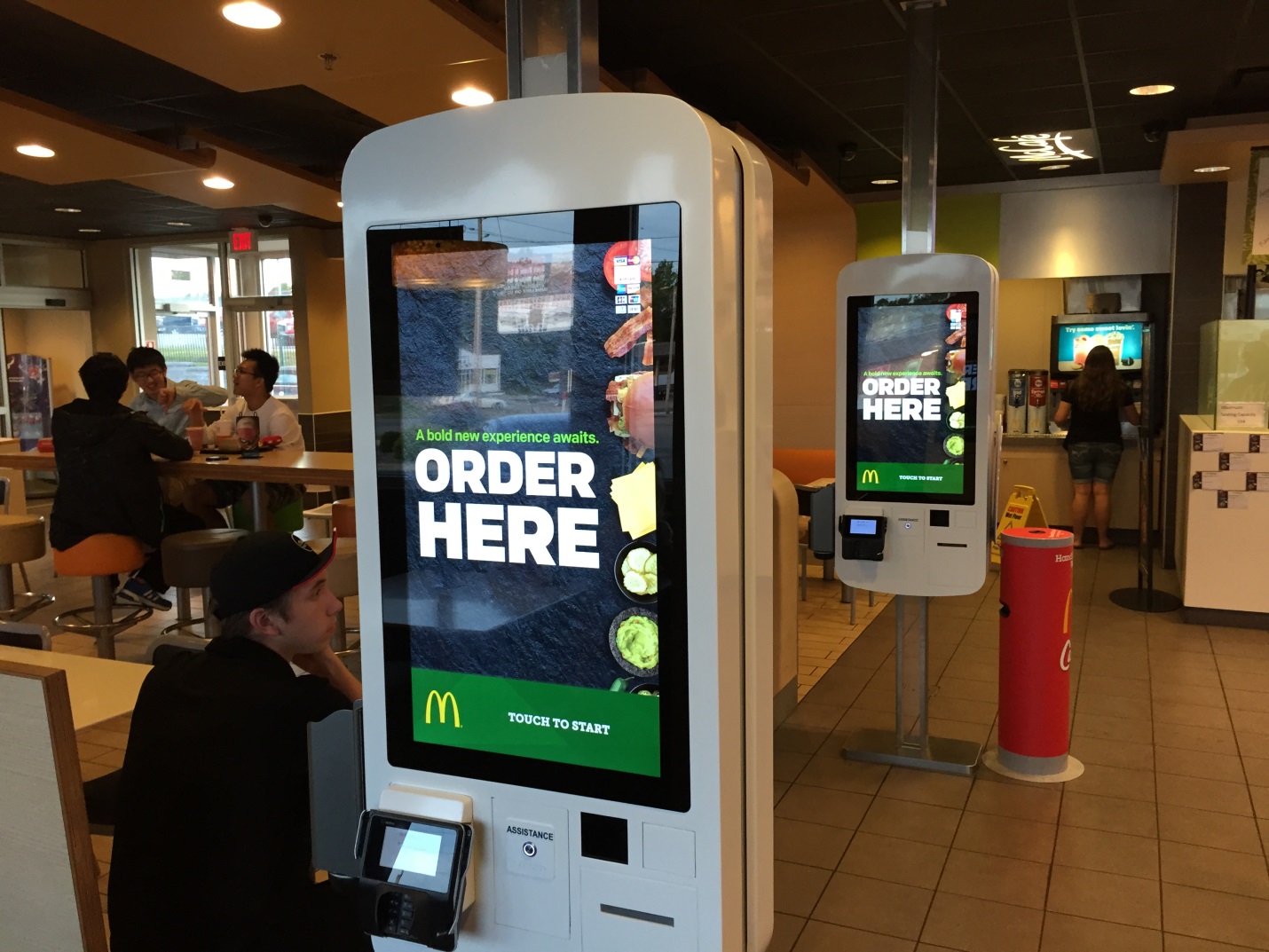 While describing the mobile app as “great with a lot of very good value,” Ms. Senatore said integrating the app ought to be the goal. Mr. Easterbrook agreed.

“We want one single ecosystem for our customers,” he said. “So no matter if they want to come through the drive-thru, order through a self-order kiosk, have mobile order pay or home delivery, they want to be treated as that one individual. So therefore, we have to blend the technology platforms that we can engage with them in one compelling way. That’s when you get the whole C.R.M.  (customer relationship management) platform, your whole customer relationship management piece that becomes a lot more compelling, so absolutely that's the goal.”

Achieving such a goal is easier said than done, Mr. Easterbrook said, citing the “sheer volume of data” associated with 69 million daily customers at 37,000 restaurants around the world.

“There’s a lot a lot of data that you’ve got to manage,” he said, adding, “You never get there as quick as you want.”