We use cookies to provide you with a better experience. By continuing to browse the site you are agreeing to our use of cookies in accordance with our Cookie Policy.
Home » Balancing authenticity and innovation

KANSAS CITY — Regional street foods are playing a more influential role on restaurant menus. Such chains as The Cheesecake Factory, and others known for featuring international dishes that honor the original recipes, are keeping close tabs on what’s “hot” at street level. Recently, “street” tacos have quickly moved through Datassential’s Menu Adoption Cycle “and grew 145% [on U.S. restaurant menus] in just the past four years,” said Mike Kostyo, the market research firm's senior publications manager. He finds the word “street” on nearly 10% of menus overall, including on 13% of casual dining menus.

Upon returning from cross-country travel to industry conferences and to targeted immersion tours, Datassential staff publishes “Dine Around,” a trend magazine that highlights a specific region or city.

“For a long time we saw a lot of focus on Asian as well as Latin American concepts, but now we’re seeing more interest in Middle Eastern cuisine with concepts like Shaya, the Israeli restaurant in New Orleans, attracting a lot of attention, and dishes like shakshuka (eggs poached in tomato sauce, served with pita) are growing on menus,” Mr. Kostyo said. “Actually, shakshuka has grown a whopping 326% in just the past few years.”

Some of the fastest growing spices mentioned on menus today include several from Japan along with seed blends such as "furikake and togarashi, which add both heat and texture,” according to Datassential. But it’s gochujang that is earning kudos as the “fastest growing global flavor.”

Gochujang is featured in the food truck-inspired Asian Fried Chicken Sandwich at Jack in the Box. 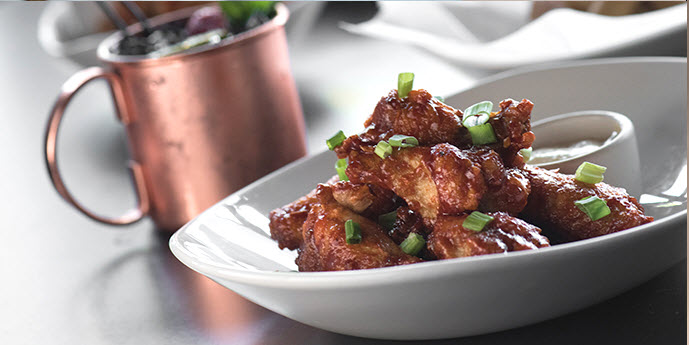 Getting off the street

When it comes to international street food, Chef Hinnerk Von Bargen has become an expert. He joined the Culinary Institute of America faculty in 1999 and currently serves as professor and leader of the Culinary Arts Department at its San Antonio, Texas, campus. In addition to teaching culinary courses, Mr. Von Bargen is involved in product R.&D. through the C.I.A.’s industry consulting division.

His book “Street Foods” was published in 2015, and in 2017 he and his wife Ming Qian Von Bargen opened Ming’s Noodle Bar in downtown San Antonio.

“Primarily, I’m with the C.I.A., but for me Ming’s Noodle Bar is a cool playground for testing concepts,” Mr. Von Bargen said. 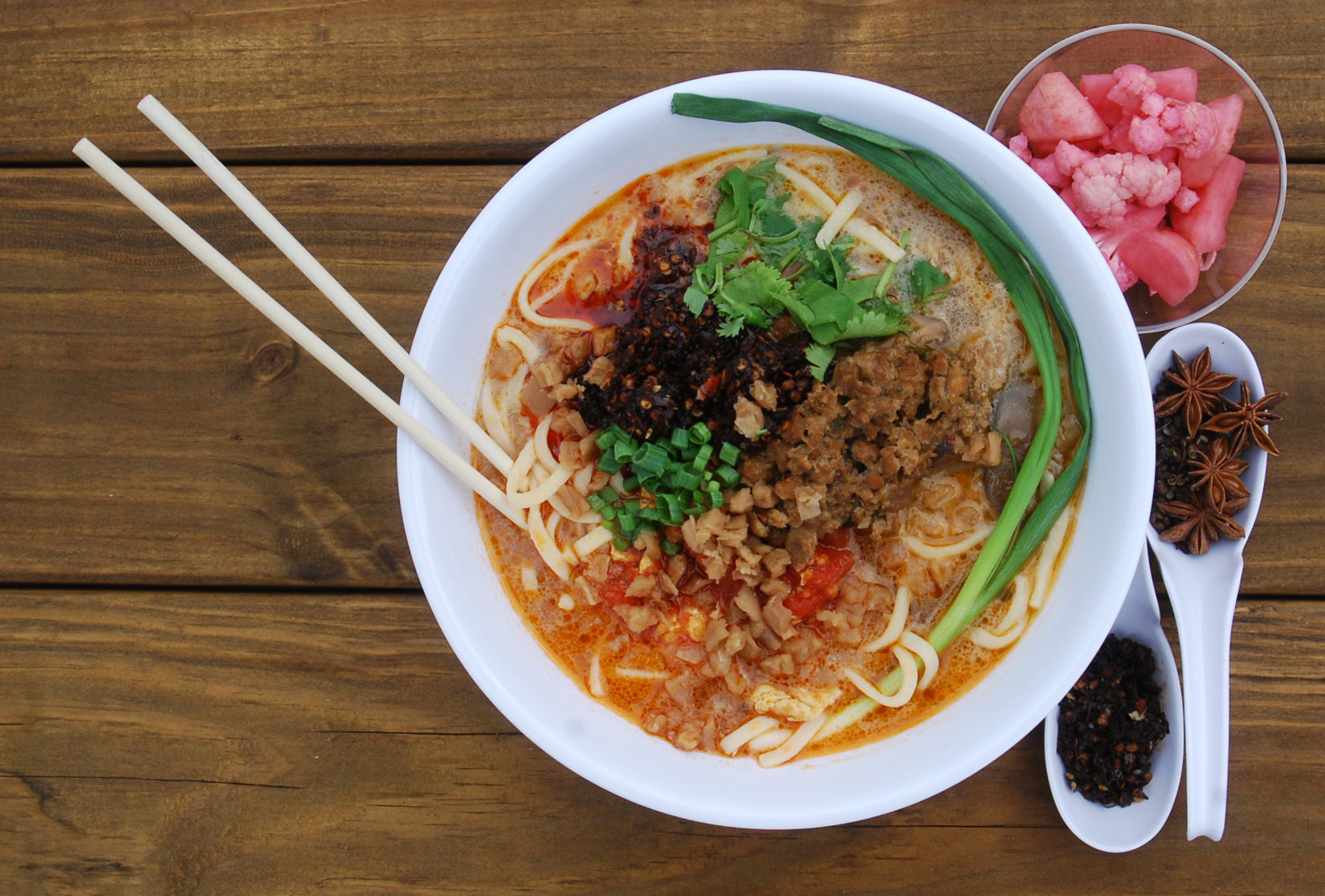 Ming was developing the Noodle Bar at about the same time her husband was finishing his book, aiming to provide how-to information for chefs interested in developing a street food concept.

While chefs may aspire to maintain the authenticity of different cuisines, Mr. Von Bargen recognizes all cuisines need space to evolve.

In San Antonio, Mr. Von Bargen is seeing an increase in the use of harissa, peri peri, fermented chili paste, chimichurri and other condiments that provide a way to boost the flavor of grilled meats.

“Guests put it on the meat themselves when it’s served as a tableside condiment in an Argentinian restaurant, for example,” he said. “Also, with the growing awareness of Latin cuisine, chimichurri is being used for a simple braise.” 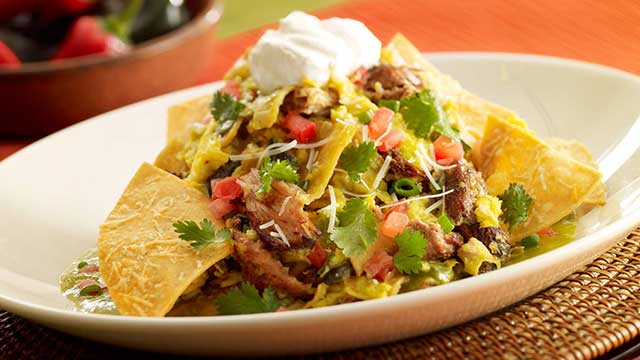 “We used to be guided by comfort food,” Mr. Okura said. “In my opinion, street foods are really good examples of comfort foods to that region. It’s what the local people grew up with from taquitos to Asian chicken dumplings. Our chicken parmesan sandwich, crispy tempura fish tacos and miso salmon are all ‘street foods’ prepared and received with love.”

Based on research conducted in Mexico City and Guadalajara, Mr. Okura and his staff developed green chilaquiles, which became a popular breakfast item on The Cheesecake Factory’s menu.

“The recipe is based on my personal research of authentic presentations and authentic flavors; the ingredients (including chips, cheese, etc.) honor the authenticity of the dish,” he said. “Our presentation respects the ethnic roots of this dish; we enhanced it to make it more acceptable to our guests.”

The most significant challenge Mr. Okura faces is balancing authenticity of a concept with the need to engage customers. One success story is gochujang.

“We’re using it now more than ever,” he said. “It’s spicy but not just like Tabasco. We have a Korean crispy fried cauliflower appetizer that went to the top in popularity. We couldn’t make it without the gochujang.” 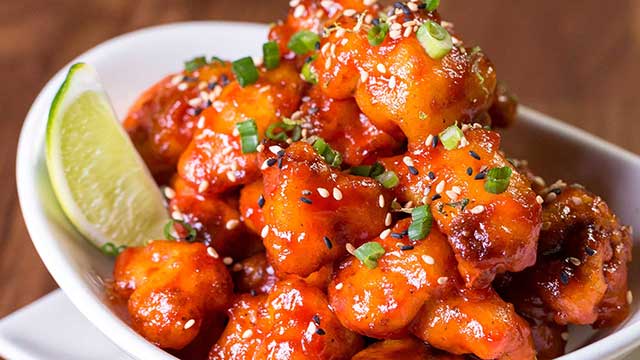 Asian customers who visit The Cheesecake Factory have reported surprise and delight to find the recipe reminds them enough of the original to warrant them saying it’s being done correctly.

“I’m confident we’ll make guests from that international culture happy because we’re doing everything we can to be respectful of that culture — and we want to offer it to as many people as possible,” Mr. Okura said.

“African flavors” is a trend identified in a survey of chefs who belong to the American Culinary Federation. Sliced biltong, a naturally cured beef jerky popular in South Africa, has been incorporated into a Biltong Carpaccio Caesar Salad at 10 Degrees South, an Atlanta, Ga.-based restaurant specializing in South African fare.

Justin Anthony is the owner of True Story Brands Hospitality Group, Atlanta, and the 128-seat 10 Degrees South was his first culinary endeavor in the U.S. The business features a variety of concepts, including Yebo, which features a rotating Beach Haus or Ski Haus m 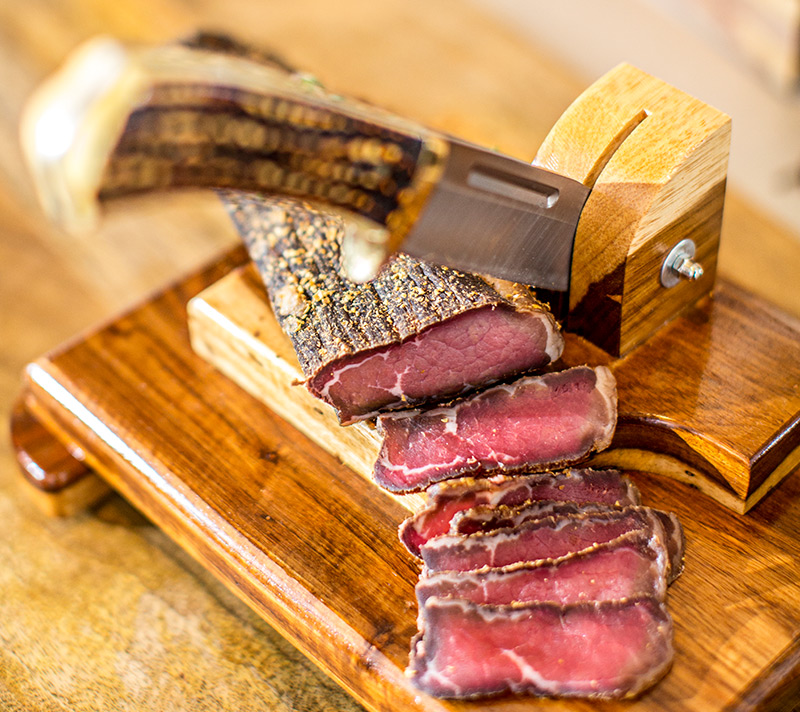 Peri peri is the condiment of choice for a multitude of dishes at Yebo.

“It’s our Tabasco, or sriracha — I’m like the guy in that scene in ‘My Big Fat Greek Wedding’ — if anything is wrong with a dish, I’ll add peri peri,” Mr. Anthony said.

Introducing South African flavors and cuisine to Atlanta has not been a huge stretch. South African cuisine features a lot of Indian curries, and it’s a fit with the Atlanta Low Country or South Carolina influence. Mr. Anthony menus shrimp and grits curry, “more of a ‘commonwealth,’ very mild curry that Australians and the English would choose,” he said. “We also do a flame-grilled fried chicken with peri peri. It’s one of the most typical South African dishes.”

The dish’s batter includes peri peri salt, then Mr. Anthony drizzles the chicken with house-made peri peri sauce. Plus, it’s served with a ramekin of peri peri for dipping.

Holding firmly to the integrity of the original individual South African dishes, Mr. Anthony said actual dishes aren’t “fusion,” but the menu is.

“South African food is very international because it has so many different cuisine influences — some say, ‘It’s like regular food but with better flavors!’” 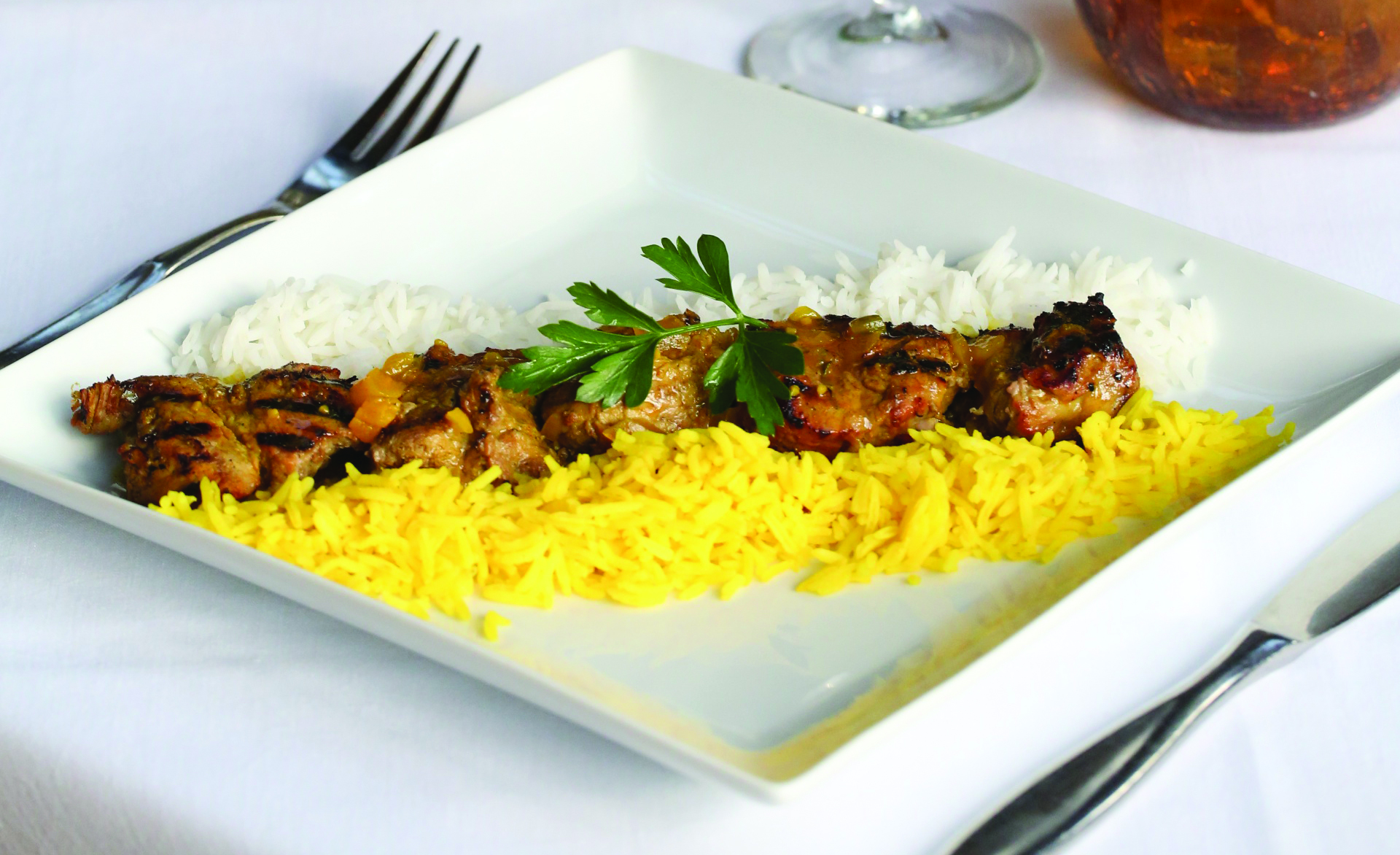 Sosaties is a traditional South African dish that has French, Portuguese, Eurasian and Malaysian influences. To prepare, beef tenderloin is rubbed with coriander and a bit of peri peri salt, marinated 24 hours in milk and spices, then dipped in vinegar. Skewered, it’s grilled on an open flame then served with white and yellow rice topped with sweet-and-tangy apricot curry chutney.

“It’s like the Pop Rocks I had as a kid — with this dish, there’s a lot going on in the mouth,” Mr. Anthony said.

In 2017, after more than a dozen years as the award winning executive chef of Panzano in Denver, Colo., Elise Wiggins opened her own 200-seat Italian restaurant, Cattivella, which means “naughty little girl” in Italian. Ms. Wiggins makes annual pilgrimages to Italy to work with local chefs, learning the classic techniques first-hand and becoming familiar with the authentic ingredients at the heart of the flavor.

While acknowledging the steadily growing popularity of Latin and Asian cuisines, she believes Italian will remain the world’s favorite. She continues to create authentic dishes that she hopes will be new to her more adventurous guests.

“I ensure that my menu items are authentic because I have visited the particular areas of Italy and study with the local chefs to learn to prepare these dishes the ‘traditional’ way,” Ms. Wiggins said. 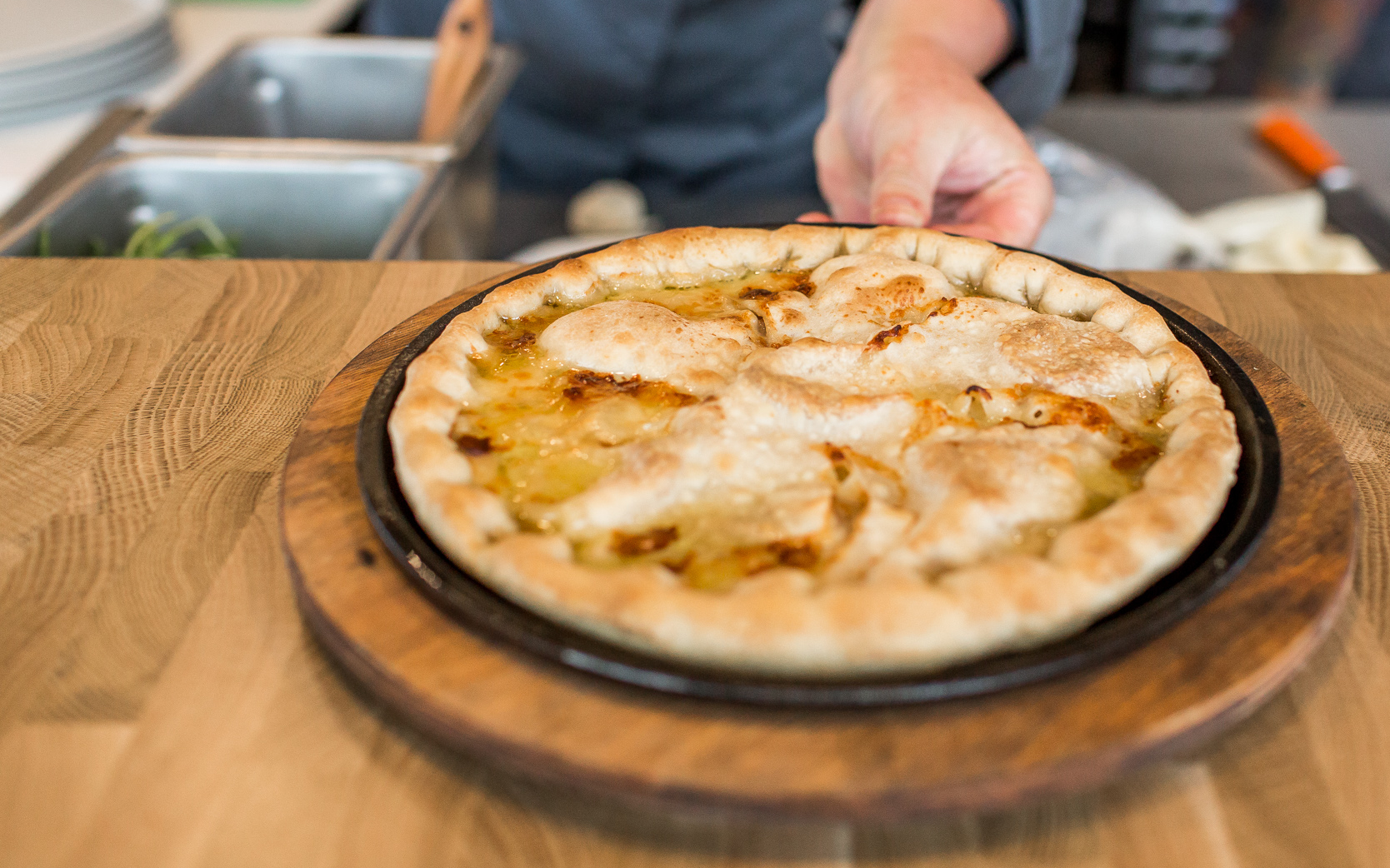 While Roman street food has a place on her menu in spagliozze (fried polenta), for example, she’s proudest when presenting items most American chefs wouldn’t use.

“For instance, I serve Batsoa from Piedmont; it’s a delicious pig feet appetizer,” she said.” My goal is to seek dishes that no one else is serving in the states.”

Another example is Focaccia di Recco (i.e., the Bread of Recco). The menu item features a super-elastic dough that is stretched paper thin on a three-foot in diameter metal pan, covered with dollops of crescenza (i.e., cows’ milk cheese), then topped with another thin layer of dough. Next, Ms. Wiggins punctures the top layer for steam to escape, brushes it with a bit of olive oil, and bakes it in a 500°F oven.

“The slightly tangy cheese melts and I’ll top [the ‘bread’] with a bit of arugula, prosciutto and a sprinkling of sea salt," she said. "I figured nobody’s doing this in the U.S., so I brought it back.”

Ms. Wiggins’ hot condiment of the moment is one she learned to prepare while visiting chefs in the Calabria region. 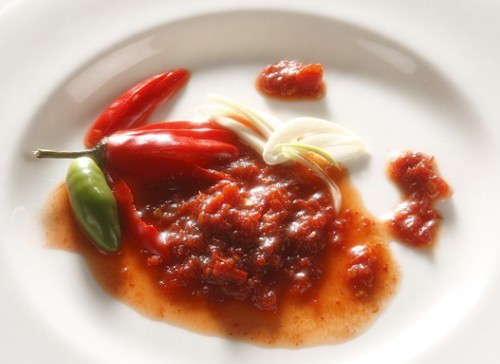 “Pilacca, Italian fermented chili paste, is like crack to me,” she said. “People in the southern part of Italy love the heat of chilies. You flash fry them whole — just pop the tops off first. Flash frying loosens the skin and caramelizes part of the pepper yet maintains freshness.”

To prepare, put one pound of whole peppers into the food processor, along with one tablespoon of finely minced fresh garlic, plus one teaspoon of sea salt, then chop. Place the mixture into an uncovered container, set out at room temperature for a day or two; the garlic will ferment the chilies.

Looking to the past to uncover “new,” addictive flavor boosts like pilacca may spark fresh ideas for globally-inspired menu innovation, even for today’s discerning palate.

“People ask to buy it all the time,” Ms. Wiggins said.