We use cookies to provide you with a better experience. By continuing to browse the site you are agreeing to our use of cookies in accordance with our Cookie Policy.
Skip To Content
Home » New goat cheese forms and flavors to increase consumption in U.S.

CHICAGO — Dairy goat milk and goat cheese (chèvre) continue to see slow, steady growth trends in the United States. Much of this is attributed to the higher protein and lower cholesterol levels found in the products, as well as the fact that sensitive stomachs find it easier to digest.

This is nothing compared to other countries, mainly those in Asia and Africa. In fact, goat milk is the No. 1 consumed milk in the world. It is estimated that 65% of the world drinks goat milk. This is because in many countries, it’s quite common for a family to own a goat, which on average, yields a gallon or two of milk a day, compared to cows that produce four times that amount. One goat produces just enough milk for a family’s daily needs, and no refrigeration is required.

U.S. dairy goat farmers and marketers have become more aggressive with educating consumers on the benefits of goat milk and products made from it. The main differences are in protein and fat composition. For starters, goat milk has been shown to be less allergenic than cow milk because of its low concentration of the highly allergenic protein known as alpha S-1 casein, a protein found in significantly high levels in cow milk. Beta-caseins are the major proteins in human and goat milk, as opposed to the alpha-caseins predominant in cow milk. The near absence of alpha S-1 casein in goat milk provides for a softer curd that is easier to digest.

Another reason many find goat milk to be easier to digest is because of its smaller fat globules, as compared to cow milk. It also contains less lactose than cow milk, which is important to those with lactose intolerance.

From an appearance and flavor perspective, goat milk is comparable to cow milk. It’s just as white and has a slightly sweet taste. The smaller fat globules yield a smooth, creamy mouthfeel in applications, even without homogenization. This composition renders the milk to be easily converted to soft curd cheese, the form most consumers know. Such goat cheese may be made by simply allowing raw milk to naturally curdle. This is followed by draining and pressing the curds. On a commercial scale, food-grade acid, such as vinegar, or rennet may be used to coagulate the milk. 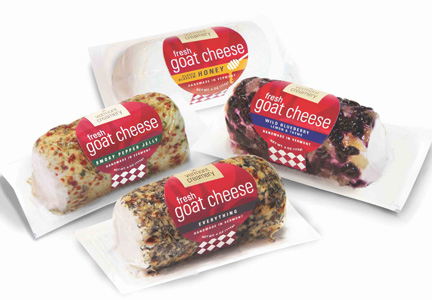 “In the 34 years since we made our first fresh chèvre, Vermont Creamery has grown while staying true to our core values,” said Adeline Druart, president of Vermont Creamery. “As we expand our offerings, high-quality, unique ingredients remain a focus of our innovation efforts. The search for the newest flavor selections was rigorous, and the result is an elevated collection of fresh goat cheese that’s made in Vermont.”

The Clover Blossom Honey variety combines fresh chèvre with pure, liquid honey produced in North Dakota. The result is a tart, creamy cheese with a subtly sweet, floral flavor. Blueberry Lemon & Thyme chèvre is made with dried, sweet wild blueberries and candied lemon peel for some tartness. The savory spice of thyme complements the sweetness of the berries.

Sweet meets heat in the Smoky Pepper Jelly flavored log. A twist on an American classic — coupling creamy fresh chèvre and sweet and smoky pepper jelly — this log is hand-rolled in a rich, dry rub that boasts flavors of poblano peppers and hickory smoke.

“We not only want to produce the cheese that people savor; we want them to eat it in the manner they enjoy the most,” said Katie Fuhrman, head cheesemaker. “Snack and single-serving options are one of the fastest growing segments, and we intend to bring quality goat cheese to the forefront.” 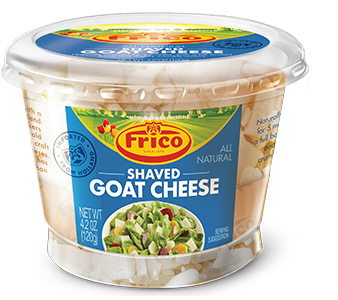 Perhaps the most innovative flavor of chèvre soon to be imported into the U.S. comes from Woodside Cheese Wrights located in the Adelaide Hills region of South Australia. New Anthill is a soft goat cheese topped with green ants. The cheese was awarded a “Super Gold” at the World Cheese Awards in 2016 soon after its release but until now has only been available in Australia.

The company is now using new technology to extend the shelf life of the product, and it should be arriving in New York soon, pending final Food and Drug Administration approval.

Sourced from Crocodile Dundee country in the Top End of Australia, green ants have been eaten by indigenous Australians for thousands of years and are becoming increasingly popular as a native food. Kris Lloyd, head cheese maker and chief executive officer, described the taste of the ants, also called weaver ants, as a combination of kaffir lime and lemongrass “that give a little citrus pop, almost like having a sherbet.” 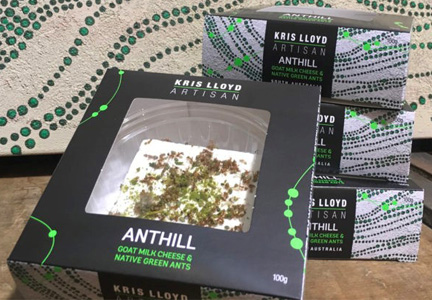 “It just comes together beautifully," Ms. Lloyd said. "There’s this great marriage of acid flavors that just work. There’s no other cheese in the world that has green ants on it, and it tastes amazing.”

“For us to grow in the U.S. it will just come down to our ability to maintain the high quality of the products,” said Ms. Lloyd. “The appeal is there. The cheeses they have chosen are quite unique and if we are going to put Australian food culture on the map, this is probably the way to go about it.”