Thank you for smoking

KANSAS CITY — Executive chef Bryant Anderson of Rack House Kitchen & Tavern in Arlington Heights, Ill., is known for his traditional meat-smoking techniques and adoration of barbecue flavors. He prides himself on the long hours that go into producing the perfect flavors and tenderized meats that create stand-out dishes, including two types of ribs that “fall off the bone.”

“We dry rub our baby back pork ribs and then hickory smoke them for three hours,” he said. “The beef short ribs smoke for two hours.”

Most smoking takes place using an indoor commercial smoker. That’s how he makes his famous 14-hour hickory-smoked beef brisket that is caramelized on the surface. The same is true of the corned beef used in the Reuben sandwich.

“The Reuben is one of our top-selling sandwiches," Mr. Anderson said. "After brining and curing the corned beef, we hickory smoke it for eight hours. Most corned beef simply gets boiled.”

Another specialty at the restaurant is its wings, which are smoked for two hours over hickory and oak woods.

“Hickory is a deep, bold smoke that penetrates the meat,” he said. “The oak provides additional flavor nuances that bring the smoky flavor all together.” 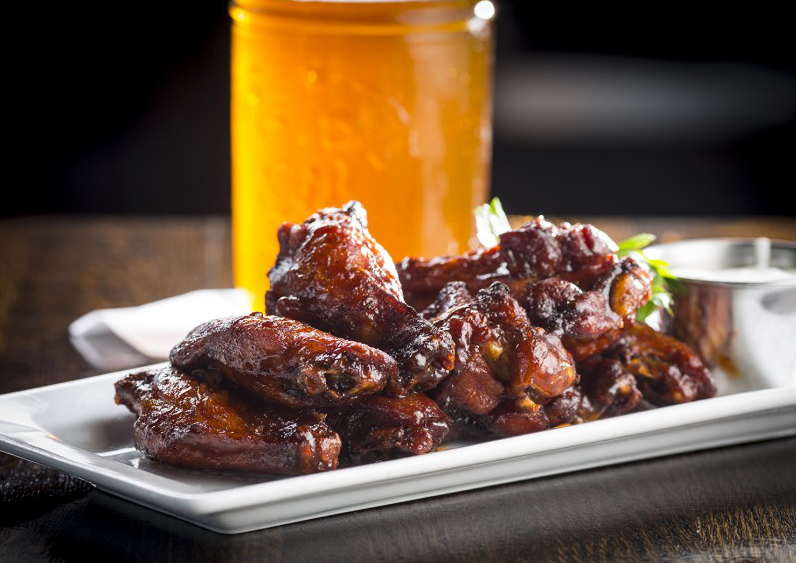 The wings are finished with house-made sauces, many of which are made with homemade smoked stock.

“We make beef stock from the smoked beef brisket trimmings,” Mr. Anderson said. “And the bone from our oak-smoked pulled pork is used to make smoky brine. We also have a mobile smoker named Bubba that we take to outdoor events."

But not every chef has a “Bubba,” and in commercial food manufacturing, time and space often prevent 14-hour smokes. That’s when added seasonings and flavors enter the food preparation equation.

Brad Weber, smoke and grill technical sales and applications at Red Arrow, said, “By incorporating a complex smoke or grill flavor to a seasoning or marinade, you bring a more authentic, consistent eating experience to the consumer.”

Regardless of source and form, there’s no denying that smoky foods are trending.

“Smoky flavors are seeing increases across the board in both food service and retail,” said Elizabeth Lindemer, corporate executive chef of Fuchs North America. “This trend isn’t limited to meats. Vegetables, snacks and even dairy have been taking on smoky and fiery flavors. Smoke adds complexity to a flavor, which is particularly appealing to millennials who are seeking out new and interesting flavors. By adding a smoky element to a familiar flavor, like barbecue, for example, a product might generate new interest.” 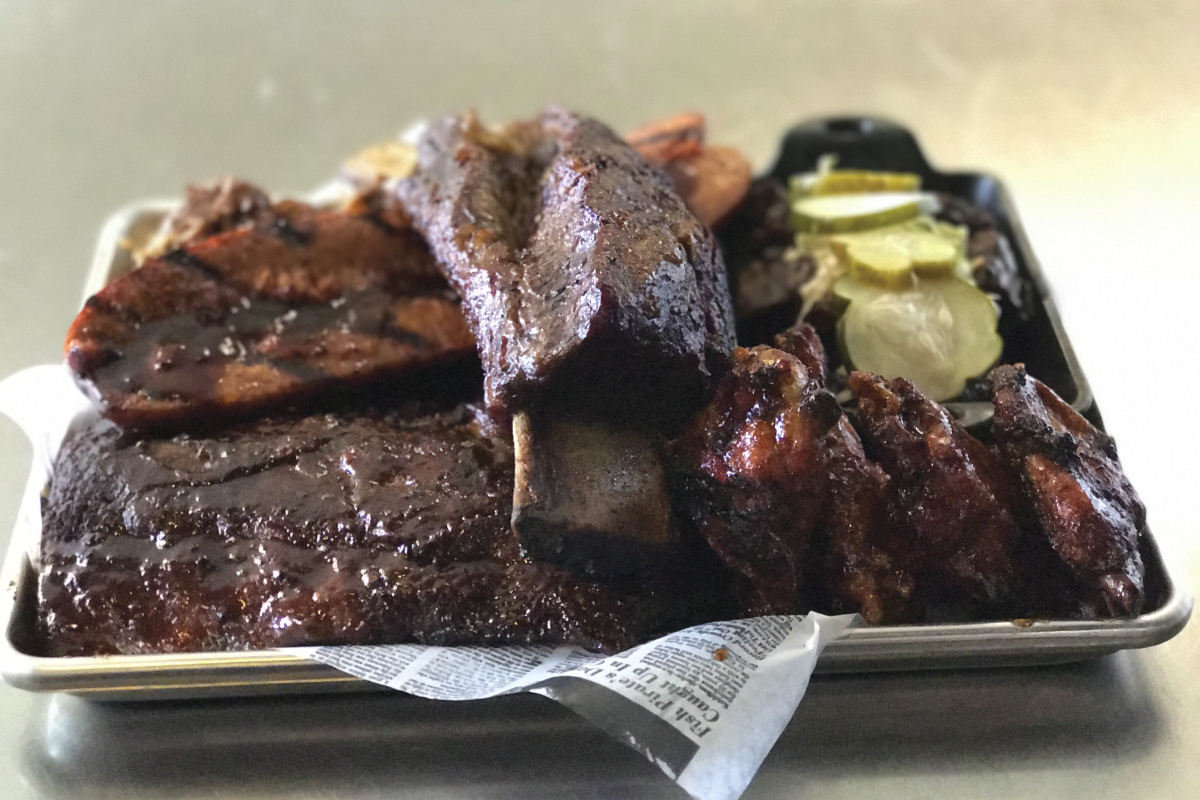 Smoking also is part of the meat’s story. At Rack House Kitchen & Tavern, the menu emphasizes the length of the smoke and the wood used when preparing the meat.

“Consumers are increasingly interested in food that tells a story,” Ms. Lindemer says. “They like knowing the origins of their food and how it was prepared. In general, flavors that reference particular preparation methods, such as roasting, smoking, charring, toasting and grilling, are all on the rise, not just in food service, but also in retail.”

The need for convenience is driving innovation in ready-to-eat, ready-to-cook and heat-and-eat meat and poultry products formulated with outdoor-cooking flavors. Some of these products may actually be smoked over wood to tenderize the meat and add authentic flavor. But to ensure consistent flavor in packaged products, seasonings and flavors are added.

“Caramelized, ashy, savory, smoky, roasted, charred ... when fat drips from the meat and hits the coals, new flavors are created,” Mr. Weber said. “It’s important to understand these complexities and capture all of the nuances.”

“We simply create a plume of smoke from heated sawdust of known tree species and capture that essence in water,” said Bob Johnson, business development director for Red Arrow. “It is as natural as it gets. By capturing the smoke components in water, we can pass this condensed smoke through filtration. It also allows for the natural separation of the tar components. Because the tar is heavier and sinks to the bottom in a holding tank, we can remove it from the non-tarry fraction. This results in a clean smoke that has been filtered of compounds deemed less healthy for consumption. We have removed 98 to 99.5% of the carcinogen fraction tied to traditional smoking.” 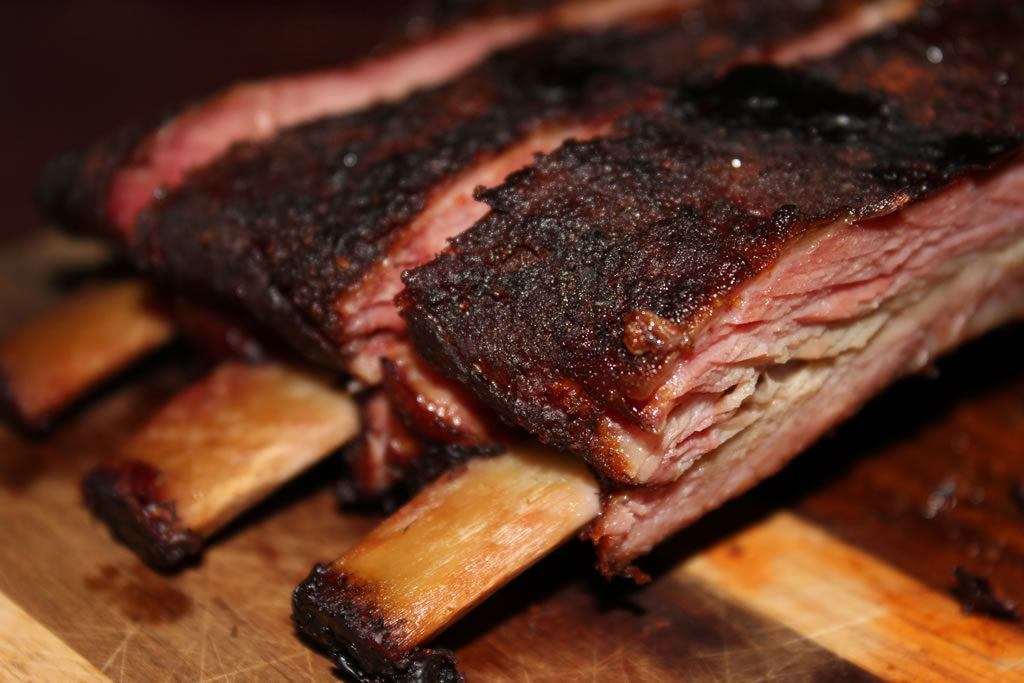 “Natural smoke is a refined smoke condensate created from a 100% natural process using only wood, heat, water and filtration,” said Patrick McKinney, chef and regional sales manager for LifeSpice. “It’s a friendlier way to add smoke as compared to traditional wood burning. We create seasonings from all types of [wood] smoke flavors.”

Seasonings and flavors allow for consistent profiles in meat and poultry. This is something not usually possible when using a commercial smoker.

Different woods allow for the layering of flavors.

“We use different wood species to create different varieties of smoke,” said Joe Schissler, sales director with Red Arrow. “Since hickory is the most common form of wood used in the U.S. for smoking, it has become the standard by which all other smokes are judged.”

A mesquite wood provides an ashier flavor profile, whereas applewood has a sweeter note. Other common woods include cedar, cherry, oak and pecan.

“The beautiful thing about the array of complex smoke and grill flavor ingredients now available is that you can capture elements in such a wide range of cooking,” Mr. Weber said. “From slow smoking a brisket for 12 hours to flame searing a ribeye in minutes, grill and smoke flavors can be customized to match the technique. You can also add these authentic cooking method flavors into products such as meatloaf, sausage, burgers or even bacon to truly create a unique and premium eating experience.” 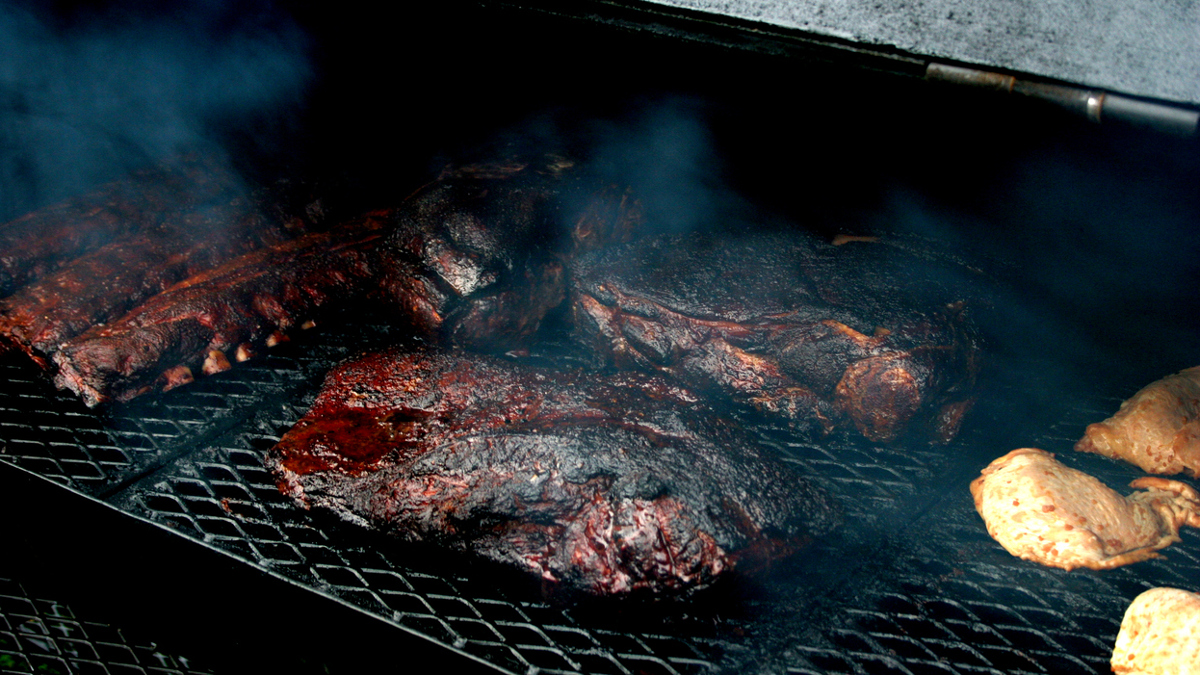 In keeping with the clean and simple formulating trend, Red Arrow recently introduced a line of naturally smoked ingredients. These ingredients are manufactured by allowing the whole smoke fraction to come in contact with common ingredients, such as sugar, garlic or onion. These ingredients then deliver the smoky flavor and do not require a “smoke flavoring” added label declaration.

“This product line was developed to fill a need in the marketplace for products requiring minimal labeling,” Mr. Johnson said. “Because we use quality hardwood sawdust to traditionally smoke these ingredients, only the ingredient needs to be labeled.”

“Our new line of naturally smoked ingredients delivers high impact and customizable smoke flavor,” said Mark Crass, vice-president and general manager at Red Arrow. “This line removes almost 100% of all carcinogens from smoke, reduces air emission and carbon dioxide by more than 82% and is an all-natural process, meaning they are not artificial or chemically derived.”

Kurt Christensen, director of research and development at LifeSpice, said, “The use of liquid smoke in meats has allowed for large increases in throughput compared to the processes where smoke is added via the smoke house. Aside from better throughput, using smoke flavors has the advantage of delivering a more consistent flavor. It’s also safer, because the temperature is better controlled when making smoke on a large scale than when the processor makes it themselves.

“A big application for liquid smoke is hot dogs. The dogs are stuffed and hung on ‘trees,’ where they are drenched in liquid smoke. The liquid smoke adds flavor, color and also sets the protein so that the hot dogs develop a skin. Natural smoke does the same thing, but it takes much longer in the smokehouse.” 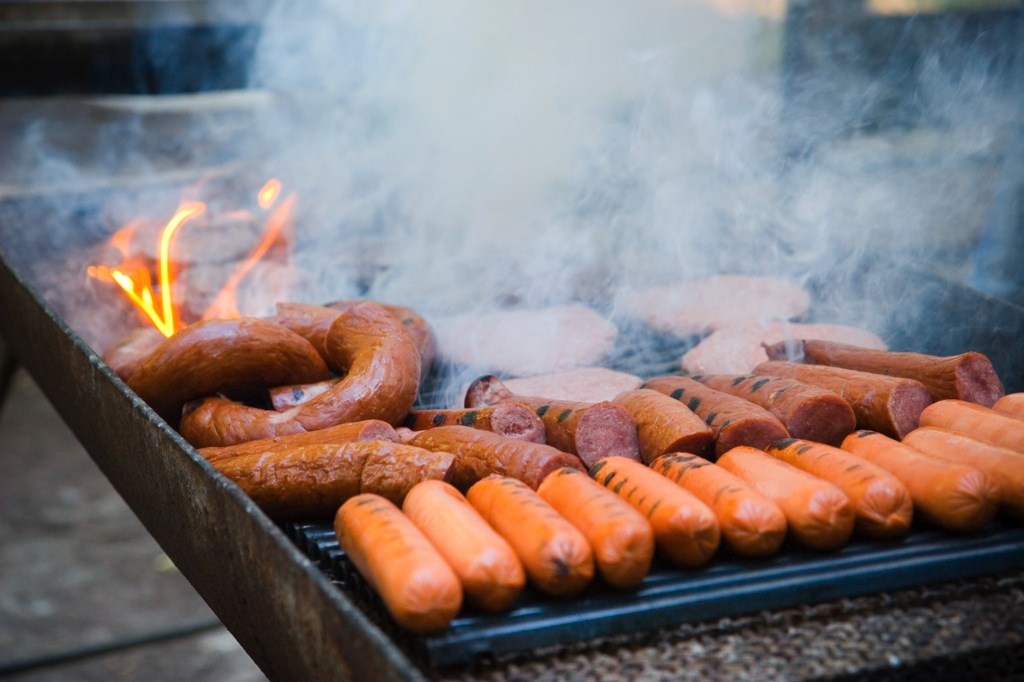 Smoke flavors come in many forms. This offers variety, but comes with the challenge of understanding when to use one over the other.

“The majority of the time the delivery method, either through the seasoning, into the meat block, drenched on product, or atomized in the smokehouse, can seem straight forward,” said Christopher Rodrigues, culinary council member at LifeSpice. “But there are inevitably snags that can be frustrating, but present learnings on best uses, a trial and error of sorts.

“Liquid smoke comes in water- and fat-soluble forms,” Rodrigues says. “Water-soluble smokes can be applied directly to the meat block at many different stages. Fat-soluble smokes can be used very similarly, with the added benefit of being plated on the seasoning side prior to going into the meat block. This can be beneficial because there is less processing needed at the manufacturing facility and less user error.

“Dried or plated versions of smoke are better implemented through a seasoning blend and used on a ground or chopped and formed product, as whole muscle applications can have aversions to absorbing the carrier leaving a residue that may be unwanted."

“Smoke is a multi-dimensional ingredient, which in addition to imparting the familiar attributes of aroma, color and flavor, contains naturally occurring compounds that inhibit both oxidative rancidity and certain classes of known spoilage and pathogenic bacteria,” Mr. Johnson said. “This may extend shelf life and flavor stability during storage and distribution.” 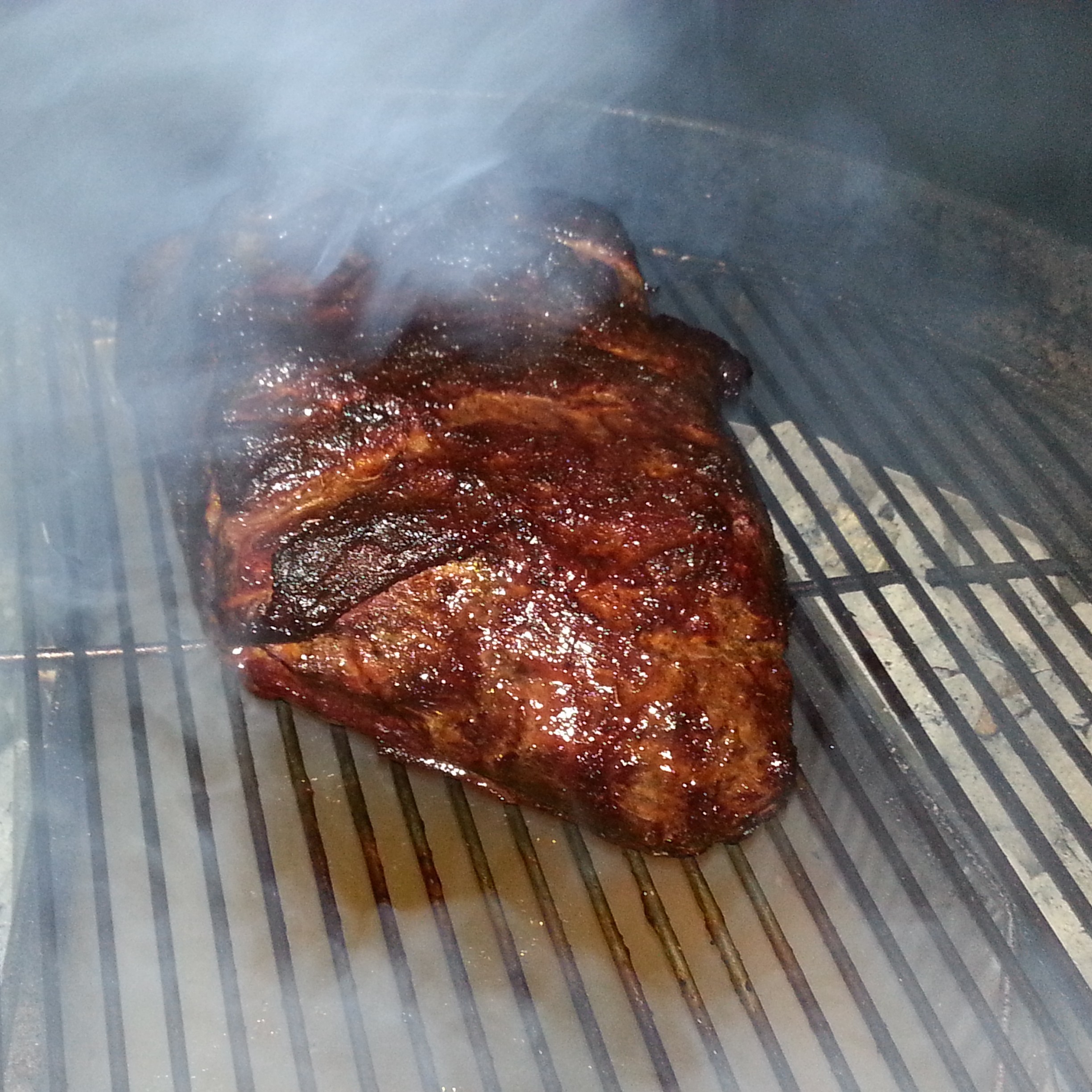 Smoke and grill flavors also assist with adding flavor to meat analogs. This appears to be helpful in improving the taste of the growing category of plant-based meat products now on the market.

“Consumers have become accustomed to a certain flavor profile and when they go meatless," Mr. Schissler said. "They still expect that flavor profile."

Smoke flavors may assist with improving the taste of plant-based meat alternatives, in particular patties and sausages. Usage levels may be reduced, as plant-based products tend to be higher in moisture and lower in fat than their meat and poultry counterparts. This often results in increased flavor intensity.

“Seasoning companies have a great opportunity to enhance these alternate proteins to improve on acceptability,” Mr. Rodrigues said. “Counterintuitively, the goal on the seasoning side will not always be to make the plant-based protein taste like meat, as the base consumer can still have aversions to rich meaty notes through association. Within those parameters there is still a lot of room for making really delicious umami rich flavors within these plant-based protein systems to deliver to the growing expectations of the consumer.”