We use cookies to provide you with a better experience. By continuing to browse the site you are agreeing to our use of cookies in accordance with our Cookie Policy.
Home » Domino’s delivering record returns

BOSTON — Domino’s Pizza, Inc., the world’s largest pizza company with more than 5,600 U.S. locations and more than 9,300 international franchises in 85 countries, is on a hot streak.

The Ann Arbor, Mich.-based company’s share price climbed to $290 per share on June 20, an all-time high and up 53% from the end of December 2017, closing higher for seven straight days between June 12 and June 20.

In a June 20 presentation at the Oppenheimer Consumer Conference in Boston, Jeffrey D. Lawrence, executive vice-president, chief financial officer and principal accounting officer at Domino’s, said the company has been able to achieve its recent success by attaining balance.

“A nice balance, certainly, U.S. versus international,” Mr. Lawrence said. “But when you talk about retail sales, we’re achieving the balance between comps and unit growth to drive retail sales growth, which is exactly kind of the way you’d want to draw it up if you were to whiteboard it. Very fortunate there. Taken a long time to get there, but we were able to get there because our franchises enjoy industry-leading economics. And that’s something that we’re very, very, very focused on, on maintaining for our independent franchisees around the world.”

Mr. Lawrence described the pizza category as “incredibly fragmented,” with more than 50% of the industry comprised of independent and regional pizza players. The largest three or four pizza companies account for less than half the category’s market share, a scenario that Mr. Lawrence said has allowed Domino’s to flex scale the old-school way in procurement and advertising as well as the new-school way in technology.

“It has really proven to be a market share changer for us and something that we’re very, very keen on making sure that we maintain that technological leadership and innovation by leveraging our scale,” he said.

Technology has been a game changer for Domino’s. Although admittedly the last to market of the big pizza players, Mr. Lawrence said Domino’s has catapulted past its competitors to become the leader in technology.

“How do you do that?” he asked. “Well, you take the long and hard road. You dedicate yourself to really courageous choices, including 10 or 15 years ago deciding we were going to have one point-of-sale system, that was going to be really important, and getting that through the U.S. system as fast as we could. When e-commerce comes around, you can then vertically integrate your e-commerce capability, both in the U.S. and now abroad, and that just again creates a lot of momentum. And we can innovate faster and more efficiently, we believe, than the other guys.” 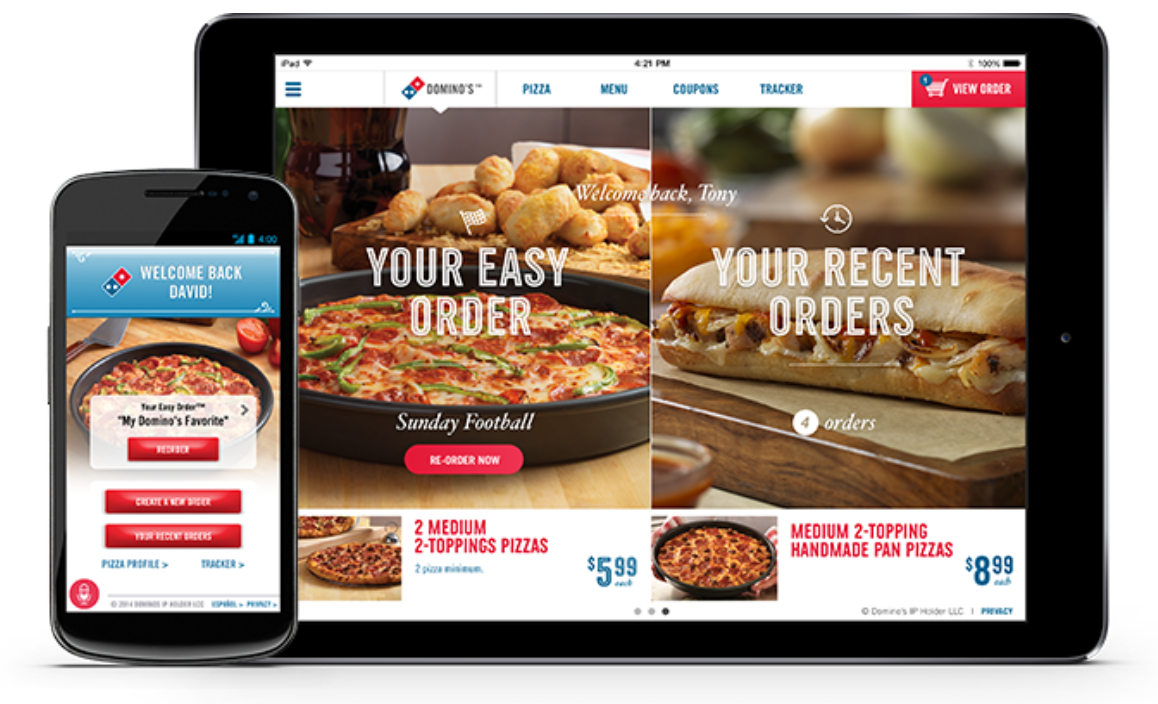 He said consumers have recognized Domino’s speed and efficiency when it comes to digital ordering and are rewarding the pizza chain with their business. Domino’s also has benefited from a strong loyalty program.

“We have more than 15 million active loyalty members, which puts us in the top 1 or 2 loyalty programs in all of Q.S.R., more broadly,” he said. “And again, (this is) just one more thing that we think we’re doing that’s helping to drive share gain over a longer period of time.”

Going forward, Domino’s plans to remain aggressive, while focused down the field, Mr. Lawrence said. He described Domino’s as “an accidental carryout company” for the first 50 of its 58 years of existence, but said the company has dedicated the past five years to becoming a “serious, purposeful, intentional player in the carryout space.”

“There are a lot of people in our industry that are pivoting into food delivery, which is extraordinarily difficult, but quite frankly, also not as large as the carryout business,” he said. “And we like to do things a little bit differently — we’re doing exactly the opposite. We have a really good stranglehold on food delivery, certainly in pizza, but we’re actually going and getting really serious about the carryout business where there are many, many more transactions and dollars to be had. And so we’re on that journey right now, I think we’re doing a pretty nice job over the last four or five years there, but a lot of share opportunity there for us if we can continue to execute.”