We use cookies to provide you with a better experience. By continuing to browse the site you are agreeing to our use of cookies in accordance with our Cookie Policy.
Home » Preventing pathogens in meat and poultry

Preventing pathogens in meat and poultry

KANSAS CITY — While rapid testing to detect pathogens has become a major weapon in the effort to keep the food supply safe, prevention has been a top priority in the fight, as well.

And while plant and surface sanitation have always been an important means of keeping pathogens away from meat and poultry, chemical antimicrobial treatment has also been a way of controlling pathogens.

Yet there’s another method that’s been growing in importance in the food safety fight: the use of natural ways of keeping bacteria off animals and the meat products that are derived from those animals. These natural tools are bacteriophages, from a Greek word meaning “bacteria-eater,” and when sprayed on cattle and on beef products, they can stop pathogens from gaining a toe-hold onto meat and poultry food products before they get to consumers.

“Bacteriophages are the most abundant microorganisms on earth and the natural enemies of bacteria and will kill their targeted specific bacteria without affecting anything else,” said Greg Strang, director of food safety for and part-owner of Intralytix, the largest maker of bacteriophage-based products to control bacterial pathogens in food processing, environmental and medical settings.

“Late last year, we welcomed a new family member to rapid real-time P.C.R. pathogen detection kits with our Salmonella Typhimurium assay, a complement to our Salmonella Enteritidis test.," she said. "Many countries have regulations requiring testing for these two prominent species of Salmonella. Bio-Rad is also about to launch a real-time P.C.R. assay to detect three key species of Vibrio, a seafood pathogen, and a new way to think about Vibrio testing.” 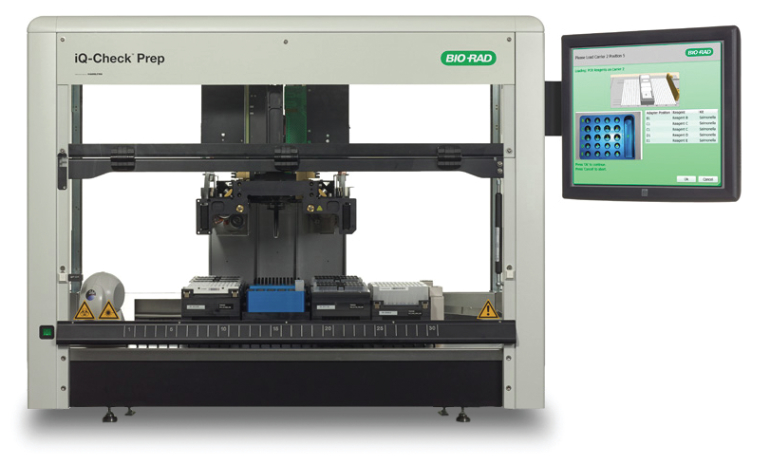 3M’s newest offerings for poultry processors include Molecular Detection Assay 2 – Campylobacter and its Campylobacter Enrichment Broth, which were launched in March. Both products provide for simultaneous monitoring of Salmonella and Campylobacter, said Cynthia Zook, a microbiologist who works in 3M's food safety division.

Right now, Intralytix is developing a new product to kill Campylobacter, a pathogen posing a threat to poultry in the food industry.

“This new product will be released within the next 12 months, and it will be something that can be used throughout the poultry industry,” Mr. Strang said. “It will be especially helpful in the kosher part of the poultry industry, because in this segment of the industry, the birds can’t be scalded before the processing takes place.”

The company also offers a product to kill Listeria monocytogenes (Lm), called ListShield. Mr. Strang said it’s important because listeriosis, the disease caused by Listeria, has one of the highest fatality rates among all foodborne bacterial diseases. This caused the U.S. Deptartment of Agriculture’s Food Safety and Inspection Service and the Food and Drug Administration to establish a “zero tolerance” for Lm in ready-to-eat (R.-T.-E) foods. But eliminating Lm from food processing plants has been challenging.

The product, he said, includes six naturally occurring bacteriophages isolated from the environment that when sprayed onto R.-T.-E products reduces contamination by 100 to 1,000 times. The company also makes bacteriophage products that can destroy E. coli O157:H7 and Salmonella – called EcoShield and Salmo-Fresh. The bacteriophage can be applied to whole birds before they are ground, resulting in a 2-log reduction. It’s effective, he said, because there can be a 30% to 35% reappearance of Salmonella in poultry.

For E. coli O157:H7, Mr. Strang said, cattle can be sprayed with the product when they come off the truck, while they are in holding pens, and before they are slaughtered. Large ground beef processors can spray trim and other meat that will then be ground.

“We make a wide range of test products, from the simple to the complex, for very small processors who use contract laboratories, to multi-nationals, who have their own big labs,” Ms. Zook said. “We can do pathogen detection from as little as one sample to 96 at a time. The newest one is a big advance because when trying to detect Campylobacter, it’s been very difficult to cultivate and detect the oxygen level to get them to grow. Now the cells can be blown up to a detectable level, and supplements don’t need to be added."

Economics are playing a greater role in the move toward rapid testing technology, Ms. Zook said.

“The meat and poultry processing industry is moving toward ‘just-in-time’, while ‘test and hold’ is an important part of operation,” she said. “Manufacturers won’t release their products until they get negative test results. So faster release of products comes when there is that negative. Take fresh meat – there is a short shelf life to begin with. Processors can’t wait for five to seven days for results.”

Ms. Zook said two major requirements are being requested by customers when it comes to testing: faster results and easy technology.

“The easy part is very important, even in big laboratories," she said. "They want less human interaction in carrying out the tests, because it’s safer that way. So, we try to have pre-mixed pre-dispensed materials for our tests. And it reduces the opportunity for errors.” 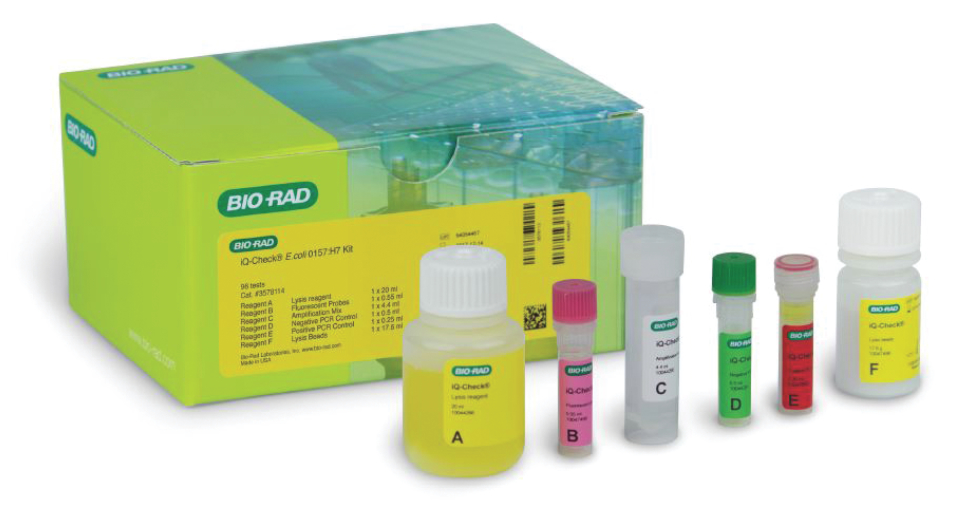 “Current methods require overnight enrichment for detection of the pathogen," she said. "Our iQ Check Vibrio test will shorten that to eight hours."

The company is also working on an assay, currently in beta testing, to transform the way labs test for Shiga-toxin producing E. coli (STEC). Using Droplet Digital P.C.R. (d.d.P.C.R.), Bio-Rad can encapsulate one bacteria in a droplet and perform a P.C.R. assay on that droplet to determine if it contains genes making it an adulterant. Current assays can’t determine if those genes are in the one cell or in different cells in the sample.

There are great advantages in using testing methods that provide quick results.

“By using a rapid method, laboratories can get information faster, information that will allow them to make better decisions on the food they produce,” Ms. Lauer said.

The need for speed

The push for speed in the food processing industry is part of the speed of life moving faster than ever, Ms. Lauer said.

“As populations are growing and becoming more urbanized, consumers are demanding more of their food supply. Food processors can no longer wait a week for test results. They need results as soon as possible.”

There is an economic role rapid testing technology plays versus more traditional testing methods that have been around for a while, Ms. Lauer said.

“When selecting a method, it is important that laboratories look at it holistically to determine the economic impact,” she said.

Rapid testing can also protect one of the most important things of all – a company’s brand.

“A company’s brand is everything,” Ms. Lauer said. “We have seen companies close because of an outbreak. Even the most responsible companies can face a recall situation. We keep this (the company’s brand) in mind, and it is at the forefront of everything we do.” 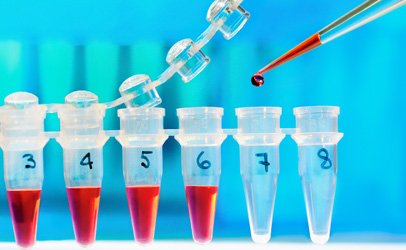 But traditional testing methods are not disappearing or being completely replaced by newer, faster methods. That’s because traditional culture methods are still the “gold standard” that produce a colony that can be confirmed, serotyped or further analyzed. For that reason, they remain as a standard for new, quick methods to be measured against.

“Rapid methods that have various international validations have been tested against these standard methods and are shown to be equivalent," Ms. Lauer said. "Users can be confident in these methods."

Testing is a method to prevent pathogens in food products not only in large high throughput facilities, Ms. Lauer said, but also in small processors who often rely on outside labs for their product testing.