We use cookies to provide you with a better experience. By continuing to browse the site you are agreeing to our use of cookies in accordance with our Cookie Policy.
Home » Alternative forms of energy beverages

CHICAGO — Consumers are interested in getting specific health benefits from foods or nutrients, according to the 13th Annual Food and Health Survey from the International Food Information Council Foundation, Washington. The three most desired health benefits in 2018 are cardiovascular health (20%), weight loss or weight management (18%) and energy (13%). And while energy has been a desired benefit since the commencement of the survey, the market for energy beverages has evolved over time, with the current trend leaning toward beverages fortified with sources of caffeine, vitamins and other energizing ingredients from nature.

This evolution is exemplified by V8 +Energy from Campbell Soup Co., Camden, N.J. Starting with a base of fruit and vegetable juices — an 8-oz can contains one combined serving of fruits and vegetables — the beverage features green tea, which provides 80 mg of caffeine. In addition, the drink contains B vitamins.

V8 +Energy’s formulation promises to make a person wakeful, rather than wired. It comes in still and sparkling versions, in regular and diet formulations. The still varieties may be consumed hot or cold.

Wired vs. wakeful sustainable energy is V8 +Energy’s proposition. To better understand the two, one must differentiate between metabolic energy and mental alertness. The simple sugars in the fruits and vegetables are about the former, while caffeine is the latter.

Metabolic energy refers to the Krebs cycle, a complex pathway that converts ingested carbohydrates, fats and proteins into a slow, steady stream of energy — adenosine triphosphate (A.T.P.) — during the process of aerobic respiration. The energy fuels the body’s cells to keep the body working, with the unit of energy measured in calories. 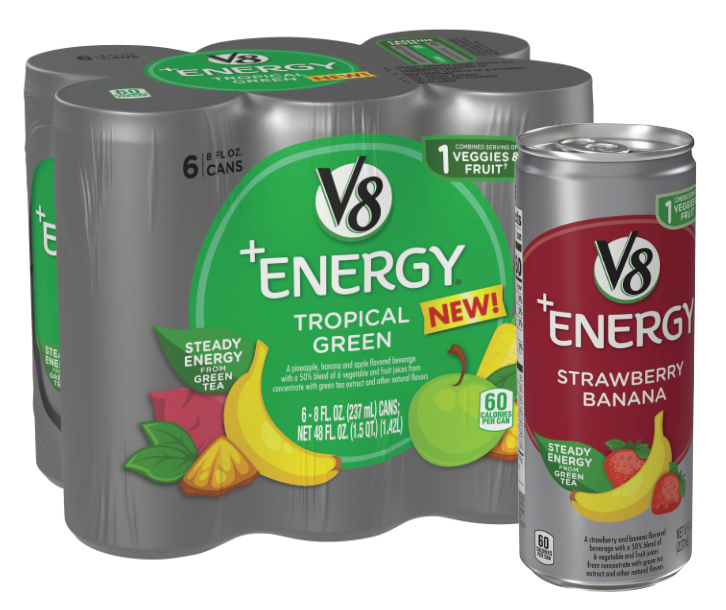 Many B vitamins are known to participate in the energy-producing process, though they themselves are not metabolized. They contain no calories and therefore are not energy. Still, because they are critical components in the Krebs cycle, they often are included in energy beverages.

Caffeine is also calorie free, and therefore not metabolized. It functions by attaching to receptors on brain cells, stimulating the brain and increasing mental alertness. Consumers perceive this physiological response as a boost in energy, but in fact, it has nothing to do with providing caloric fuel to the body’s working cells.

Caffeine is found in the leaves and fruits of an array of plants. It may be added to beverages in the form of a plant-based ingredient or as an isolated white powder. Whatever the format, caffeine easily passes from the bloodstream into brain tissue.

Interest in more natural, more biological, often neurological ways to boost energy has product developers exploring various plant extracts for use in energy drinks. For example, Synapse is an energy drink that optimizes brain function through high-performance nutrient ingredients. Marketed as a dietary supplement, the beverage relies on nootropics, which are vitamins, minerals, herbs and organic compounds that enhance cognition without negative side effects. With 30 calories per 8.4-oz can, Synapse provides little metabolic energy, but it contains compounds that assist in the Krebs cycle. It also contains compounds that increase alertness, all while being caffeine free.

“Also known as ‘smart drugs,’ we mix the nootropics with other natural ingredients to create a great taste,” said Daniel Porada, a founder of Akyron Industries, Inc., the company that manufactures the beverage. “The differentiating factor between us and other nootropics companies is that none of our ingredients are synthetic. We wanted to create a health-conscious option for people who do not want to sacrifice their health for performance.” 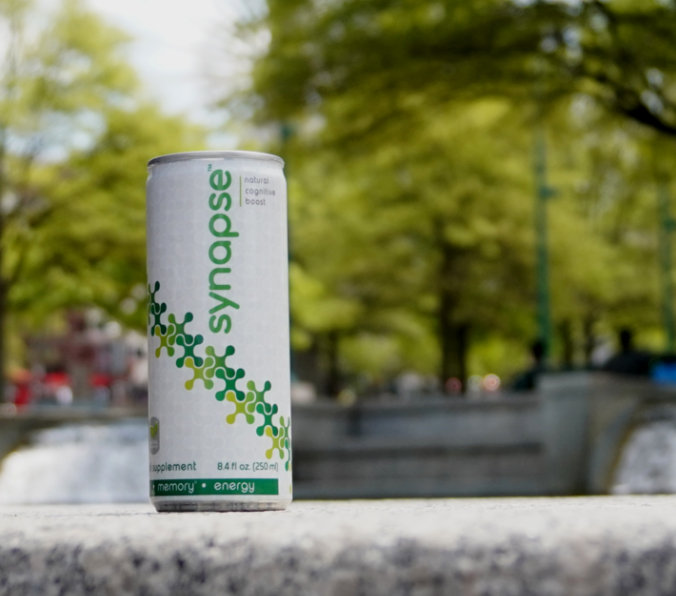 Nootropics and other ingredients in the drink are grown in the ground, giving them a strong bitter taste, so the team leveraged novel manufacturing to ensure it tasted good as well.

“The ingredients in our blend are naturally part of the human diet,” said Charles Lankau, another company founder. “They just exist in our product in greater proportions than they do in food.”

After the idea and drink blend for Synapse became a reality, Mr. Porada, Mr. Lankau and a third founder, Brandon Hall, were accepted by the Create-X program at Georgia Tech College of Engineering, Atlanta. The program provided start-up funds and industry mentors to coach the team into turning their idea into a company, which is expanding distribution beyond online sales.

“Our biggest target audience is students,” Mr. Lankau said. “Another thing Create-X helped us do in the beginning was customer discovery. We figured out what our target consumers wanted in an energy drink and how to reach that core demographic in an effective way.

“We are really hoping to revolutionize the energy drink industry. Millennials and younger generations are looking for healthier options instead of caffeine. And what we can give them is natural energy with a great taste.”

The key ingredient in Synapse is a molecule called acetylcholine, which is used by the brain for maintaining attention and focus as well as for forming new memories and learning new material.

“By using ingredients that work together to increase acetylcholine release in the brain through natural processes, Synapse works to optimize the brain’s natural function,” Mr. Hall said. “Combining this increase in acetylcholine levels with our proprietary support matrix lets Synapse prime the brain for attentive, focused work and faster learning, which can lead to greatly increased mental performance across the board.”

Instead of relying on caffeine to increase alertness, Synapse includes ingredients that help the body generate energy more efficiently on a biological level. The primary source of caloric energy is organic dark agave nectar, a low-glycemic index sweetener.

“This means no jitters and no crash,” Mr. Hall said. “Agave nectar is composed mostly of monosaccharides — the most basic form of carbohydrate — which are the preferred energy source for brain cells. These simple carbohydrates are used as fuel to replenish the ion balance of the billions of neurons in the human brain.”

Synapse also includes citrulline, a non-essential amino acid previously thought of as just an intermediate metabolite. It is known to increase the rate that the body’s cells produce A.T.P. Unlike most other amino acids, citrulline is not a component of dietary proteins; therefore, everyday foods cannot be a direct source of citrulline to the body. As a result, energy beverages are starting to include this purified compound.

Acetyl L-carnitine is another non-essential amino acid added to Synapse. It is recognized for its ability to help the body produce energy through the Krebs cycle.

“Synapse also contains a highly soluble and bioavailable form of creatine, arguably the most well-researched supplement of all time,” Mr. Porada said. “It acts as a vasodilator. It increases the rate of blood flow in the body to help all of our other ingredients to get to the brain at a faster rate, which is why a can of Synapse works so quickly. It also works along with citrulline to increase the rate at which the cells can produce A.T.P. on a cellular level.”

Many energy beverage marketers continue to rely on caffeine, often added through ingredients that are inherent sources of the stimulant. The most common is coffee and tea. Often the coffee or tea serves as the base for the addition of other energy-boosting ingredients.

Monster Energy Co., Corona, Calif., now offers Caffé Monster, a line of shelf-stable energy lattes made with arabica coffee and reduced-fat milk. The drink comes in three varieties — mocha, salted caramel and vanilla — in a 13.7-oz sleek glass bottle. Energy comes from the caffeine in the brewed coffee, and added B vitamins and coffee fruit extract, as well as sugar and glucose.

Of all the “real” teas — traditional black, green, oolong and white — green is the most concentrated source of antioxidants, an attribute that appeals to health- and wellness-seeking consumers. In addition to containing caffeine, green tea features polyphenols, with epigalocatechin gallate the most dominant. The bioactive compounds function as stimulants, increasing mental alertness.

Coffee fruit is another multi-functional stimulant. Also known as coffee berry, it is the fruit surrounding the coffee bean. Previously discarded as a byproduct of coffee production, coffee fruit is recognized as an antioxidant with robust wellness qualities, including healthy energy, immune support, weight management, joint support and cognitive function.

Whole green coffee powder derived from raw coffee beans has been shown to improve both mental focus and concentration up to eight hours, as it delivers sustained caffeine release over the time period. It also contains other coffee bean components, such as chlorogenic acids, antioxidants, minerals and dietary fibers.

Guarana extract is obtained from the seeds of the guarana plant’s fruit. The seeds are a more concentrated source of caffeine than coffee beans, which makes guarana extract a common ingredient in energy drinks.

Guayusa extract is an up-and-coming source of caffeine. Obtained from leaves of the guayusa plant, the extract contains caffeine and theobromine, another natural stimulant. When the two stimulants are consumed together, the user experiences balanced energy without any jitters, crash or jolted buzz.

Dried leaves of the guayusa plant may be brewed and consumed much like traditional tea. The main differences are that guayusa extract contains double the amount of antioxidants in green tea and does not contain any tannins, which make tea astringent and bitter. 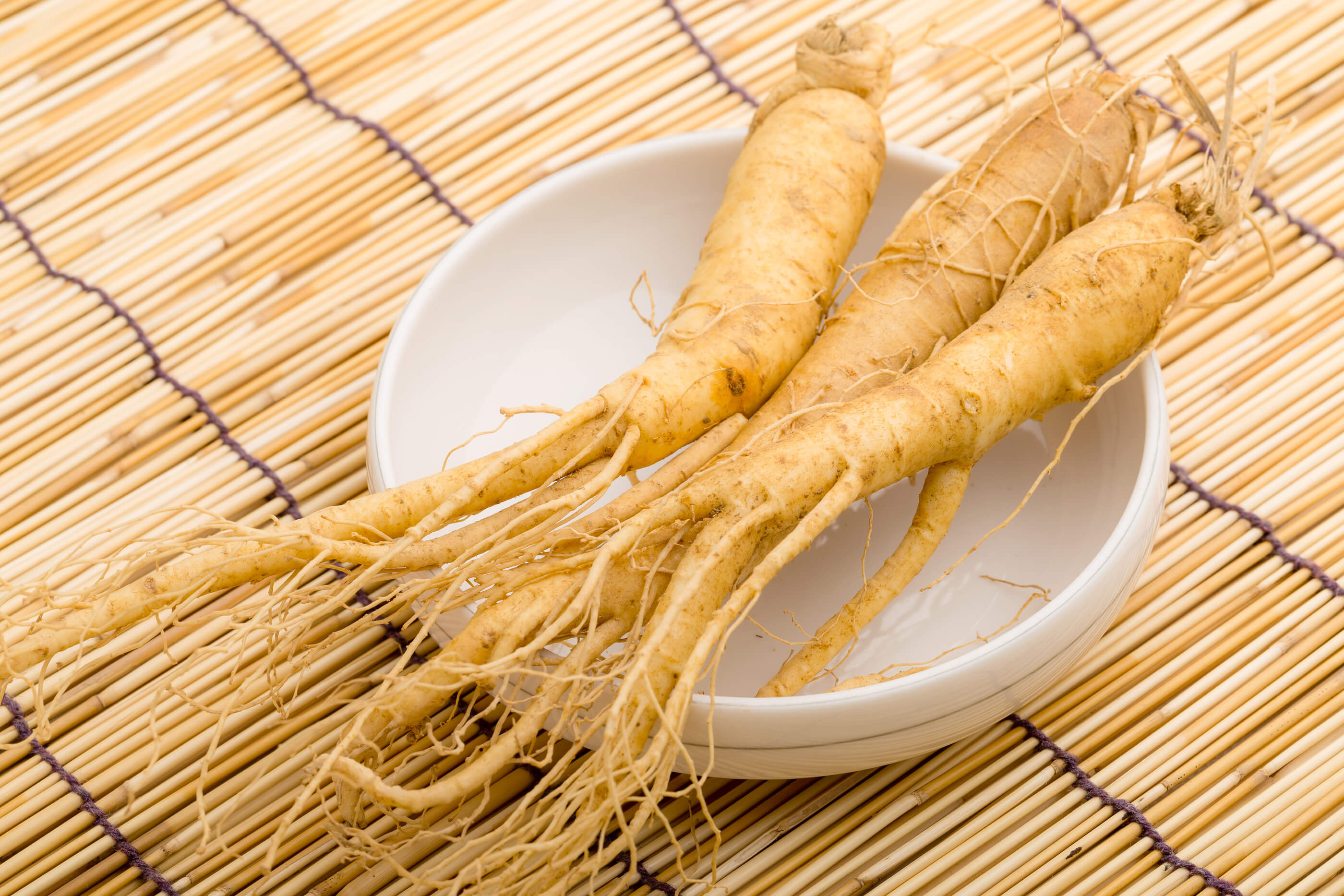 Ginseng is a caffeine-free stimulant obtained from more than a dozen species of ginseng plant. Korean Ginseng, the most common source, often is referred to as the original ginseng. The roots contain an array of nutrients, including antioxidants, vitamins, minerals and compounds called ginsenosides . It is the ginsenosides that are believed to have a stimulating metabolic effect on the central nervous system, and provide a powerful boost to energy and stamina.

Similar to a vitamin, coenzyme Q10 functions as an antioxidant. It is used by cells to produce the energy that the body needs for cell growth and maintenance and helps sustain heart health and blood pressure.

When it comes to metabolic energy, not all carbohydrates, fats and proteins are metabolized the same. Medium-chain triglyceride (M.C.T.) oils, for example, now are being added to energy drinks. They are said to fuel the body with a sustained, clean energy that satiates appetite and reduces cravings. The M.C.T. oil also has been shown to provide a cognitive boost, support fat burning and balance mood and hormone levels.

Carbohydrates such as isomaltulose provide a sustained source of energy. Derived from sugar beets, isomaltulose is a fully digested carbohydrate, but it is digested more slowly than other sweeteners, resulting in a supply of energy from glucose over a longer period of time. Being low-glycemic, it releases energy the balanced way without sudden peaks and drops of the blood glucose level.

Isomaltulose also has been shown to promote the body’s own fat oxidation. This means it increases the ratio of energy derived from fat relative to the total amount of required energy while active, leaving carbohydrate stores available for longer.

Ribose, a naturally occurring sugar made in the body from glucose, also accentuates the body’s natural process of energy synthesis. Ribose helps to reduce the loss of energy during stress and accelerates energy and tissue recovery. Through this action, ribose helps muscles regenerate lost energy and potentially minimizes any physiological consequences of this energy depletion situation.