We use cookies to provide you with a better experience. By continuing to browse the site you are agreeing to our use of cookies in accordance with our Cookie Policy.
Home » 'I can’t believe it’s not …'

CHICAGO — Such dairy alternatives as imitation cheese, coffee whitener and margarine have been around for a long time. In fact, many of them are regulated with their own standard of identity.

Historically, the applications were created as an economical alternative to real dairy. Their foundation is the swapping of vegetable oil for milkfat, as the former is less expensive than the latter. In some instances, formulations still contain dairy ingredients, hence, the products are not dairy-free. Products that are dairy-free appeal to consumers with dairy allergies.

Dairy alternatives also have had a prominent role in prepared foods manufacturing. Their processed nature makes it easier to manipulate functionality.

“Dairy analogs have historically been used as a way to reduce cost, either by extending natural cheese in different applications or as a way to completely remove a real dairy ingredient,” said Beth Warren, chief commercial officer, Edlong, Elk Grove Village, Ill. “Analogs were usually associated with low cost and low quality.

“Traditionally they have been viewed as inferior in flavor to their natural counterparts. They were seen as a functional piece and fed into manufacturers for use in pizzas and ready meals.”

Such products still exist; however, the dairy alternative sector has evolved into being vegetarian, often vegan. The selling proposition these days is the product being plant based, not its price. In fact, alternatives often are sold at a premium. 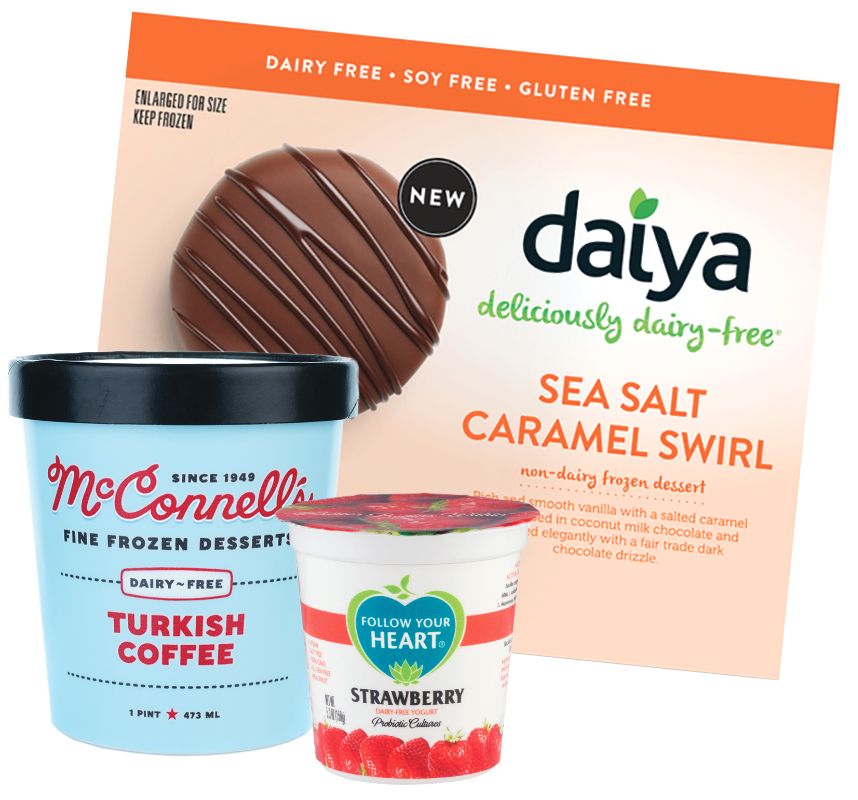 “Dairy alternatives are on a rise as consumers are increasingly going dairy-free, particularly when it comes to fluid milk used on things like cereal or in coffees,” said Tom Bailey, senior analyst — dairy, Rabobank, New York. “Dairy alternatives have competed in the dairy space for decades, but competition has intensified as dairy alternatives broaden in types, styles and categories of product.”

There’s no denying, global retail sales of dairy alternatives has climbed at an impressive rate of 8% annually the past 10 years. Retail milk alternative sales are valued at $15.6 billion, according to Euromonitor International.

“Consumers are actively seeking foods and drinks that align with their holistic health and wellness goals as well as those that are more sustainable or environmentally conscious,” said Mark Rainey, chief marketing officer for the Archer Daniels Midland Co., Chicago. “Plant-based foods and drinks, including dairy analogs, align nicely with consumer demand.”

In July 2016, Ingredion conducted focus groups with consumers in the United States and Canada who are frequent purchasers of alternative dairy products. The research showed consumers often focus on what the products do not contain — that what’s absent from a label is as important as what’s included.

Tools of the trade

Consumers who regularly choose alternative dairy products are intentional — not impulse — buyers, according to Ingredion’s research. They place higher importance on perceived health benefits and the origins of what they consume.

“A clean label is expected in this segment, but there is a texture and flavor gap that consumers would like to see closed,” Mr. Gonzales said. “Getting the sensory aspects right without compromising nutrition and label expectations will help manufacturers differentiate themselves and win with these discerning consumers.”

When developing an alternative, formulators must start at the end and work backwards. The process requires trying to reproduce a dairy product using non-dairy ingredients. Formulators need to identify the target finished product as well as develop a list of formulation goals. Is the objective to be low-cost? Allergen free? Vegan? Knowing the target consumer and potential application or use for the analog is paramount, too. Will it be a cheese analog consumed on its own, or will it be used in recipes?

“Understanding the needs of the market can eliminate many issues further down the line,” Ms. Warren said. “We worked with a customer who wanted to make a cheddar-type product for the Middle Eastern market.”

Knowing the taste preferences of this demographic, Edlong designed the product to be mild in flavor with a creamy texture. If the target market had been the U.K., Ms. Warren said it would have had to be a much sharper, almost savory and meaty-type cheddar profile.

“Innovations in raw materials and consumers’ changing attitudes toward foods have seen analog products gain traction,” Ms. Warren said. “The great benefit of analogs is flexibility. It is a category that has taken on new life because it offers flexibility to change fat, water and protein sources and ratios.”

Alternatives allow developers the flexibility to manipulate nutrition profiles. They also enable developers to experiment with new flavors and textures in unexpected ways.

When making real dairy foods, the flavor is part of the base, which is cream or milk. When making an analog, it is often best the base be as neutral tasting as possible and then flavor gets layered into it. The appearance, mouthfeel and texture of the base should mimic the dairy product counterpart. Flavor release and aroma are also key considerations.

“Don’t make flavor an afterthought,” Ms. Warren said. “Process and raw materials can have a huge impact on taste.”

Even the slightest change in the base formulation may impact flavor. Proteins, starches, emulsifiers, fats and other ingredients can alter flavor profiles.

“Sometimes the fix is as simple as changing when or where in the process flavor is added,” Ms. Warren said. 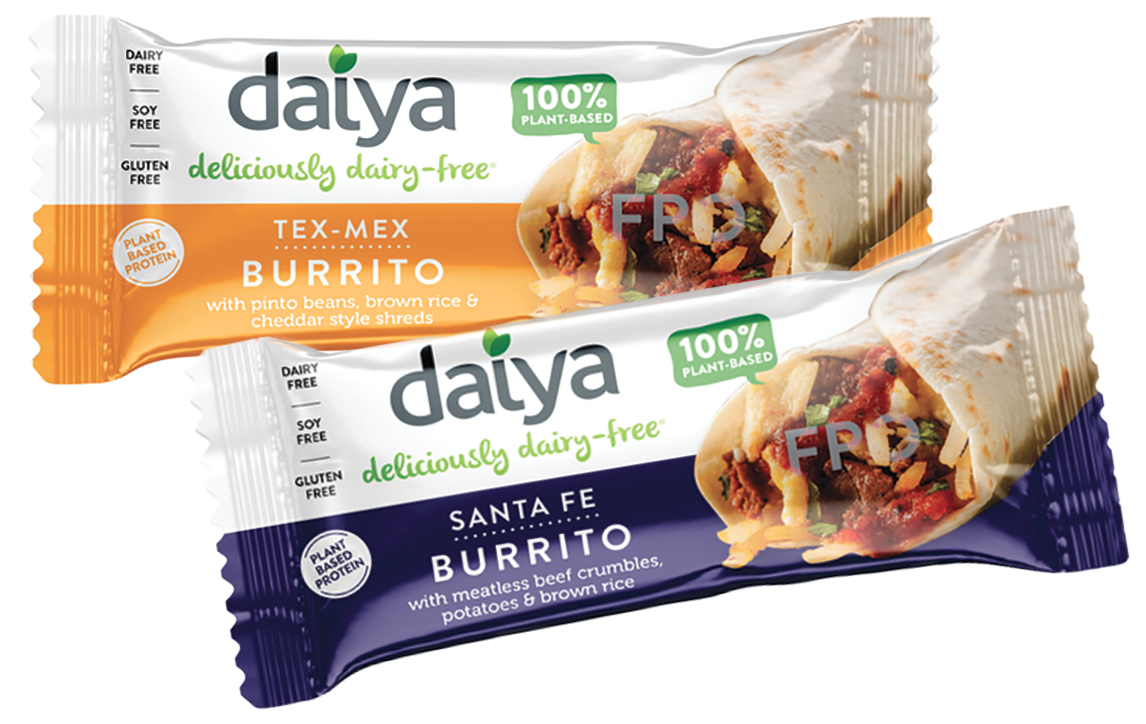 If a vegan claim is the goal, depending on the finished product, it is often helpful to combine plant-based proteins from a range of sources, including pulses, grains and vegetables. Fibers and bulk sweeteners also assist.

“Plant-based proteins such as soy proteins, nut butters and edible bean powders serve as the primary protein source for many milk alternatives, frozen novelties, yogurts and non-dairy cheeses,” said Lisa Bradford, senior scientist at ADM. “When removing milkfat, texture loss occurs. In cheese applications, milkfat assists with meltdown. Texture and meltdown can be improved with proper fat and oil selection as well as the addition of emulsifiers and stabilizers.”

In sweetened products — namely flavored milk, ice cream and yogurt alternatives — it’s important to choose a sweetener system that not only sweetens but also provides solids. The off tastes associated with high-intensity sweeteners may get magnified when combined with some plant proteins, which have their own associated off tastes. Many sweetened dairy alternatives rely on pure cane sugar for the best flavor profile.

If a vegan claim is not a priority, then flavor and taste ingredients derived from real milk, cream, cheese, butter and more may assist with delivering the characterizing dairy notes that vegetable proteins lack, Ms. Bradford said.

“And masking technologies help minimize any off-flavors associated with many plant-based proteins,” she said.

With yogurt-type products, formulators often encounter challenges with the fermentation process. This is because traditional yogurt fermentation involves not only the added starter cultures but those inherent to milk as well.

It is one thing to develop a stable product. Another is to ensure it performs as expected. This may change over shelf life, too. 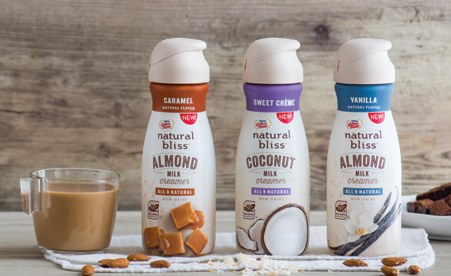 “Vegan creamers are generally not as stable to the heat and acidity of coffee,” Ms. Bradford said. “Creamers formulated with soy proteins and nut butters are more prone to feathering and flocculation when added to coffee, but with proper selection of oils, emulsifiers and plant-based buffering solutions, heat and acid stability can be improved.”

Cheese is one of the most challenging dairy analogs to produce. It is because milkfat and milk proteins are integral to the development of desirable cheese attributes.

“A food must taste good to be accepted and to generate repeat purchases,” said Mike Lefevre, director of cheese and dairy flavors, Kerry, Beloit, Wis. “This is true for analog cheeses, which have visual, textural and flavor qualities meant to mimic the cheese everyone loves, but at a reduced cost. Analog cheeses are used in many applications and are sometimes blended with natural cheese, processed cheese, foods or spreads, or cheese sauces.”

“When dairy ingredients can be part of the formulation, explore clean label cheese and dairy concentrates,” Mr. Riesterer said. “These are obtained from controlled dairy fermentations rather than chemical-sounding ingredients. These concentrates enhance flavor to ensure targeted taste is delivered while providing cost savings and other functional benefits.”

Vegan cheese alternatives, however, are a growing category. It is inevitable that authentic flavor and mouthfeel will be lacking, but that does not mean an acceptable product is impossible. It may not taste liked an aged cheddar or string like mozzarella, and that may be fine for the target consumer.

Edlong scientists developed cheese analogs flavored as cotija, Manchego, Vermont cheddar and more. Some were vegan while others were 90% analog with 10% natural cheese.

Anne Marie Butler, applications manager for Edlong in Europe, provided an example of a plant-based, Edam-style cheese product. It was made of potato starch, vegetable fat and water and contained no emulsifiers, gums, phosphates or citrates.

“We were able to create an authentic balanced Edam profile through flavor layering,” she said. “First, we masked the starch and vegetable fat taste by using a butter flavor, which also added creaminess and mouthfeel. Then we added a cheddar cheese flavor to replicate the depth and background cheesiness of a real Edam. Finally, we included a natural Edam-type flavor to provide the distinctive fruity and nutty notes of this unique cheese.”

The result was a plant-based cheese with flexitarian appeal. It is also a low-cost, starch-based product for prepared foods applications.

“Masking or neutralizing to create a pleasant-tasting product is another big objective in the dairy analog world,” Ms. Butler said. “In the area of plant-based milks, yogurts and ice creams, manufacturers are not always looking for a specific dairy profile. Often they would like to make their products more neutral tasting to improve the palatability. In this situation, dairy-free milk, butter and cream flavors work to neutralize, masking undesired off-notes, even adding richness and indulgence, without contributing a specific dairy profile.”

This neutralized analog may then be flavored with fruit or brown flavors.

Califia Farms, Los Angeles, known for its Almondmilks in distinctive, curvy bottles, is rolling out dairy-free yogurt drinks made with a proprietary blend of cultures, including BB-12. The culture is well known for its efficacy in digestive and immune health. Califia Farms is the first to batch ferment the BB-12 strain in a non-dairy yogurt. 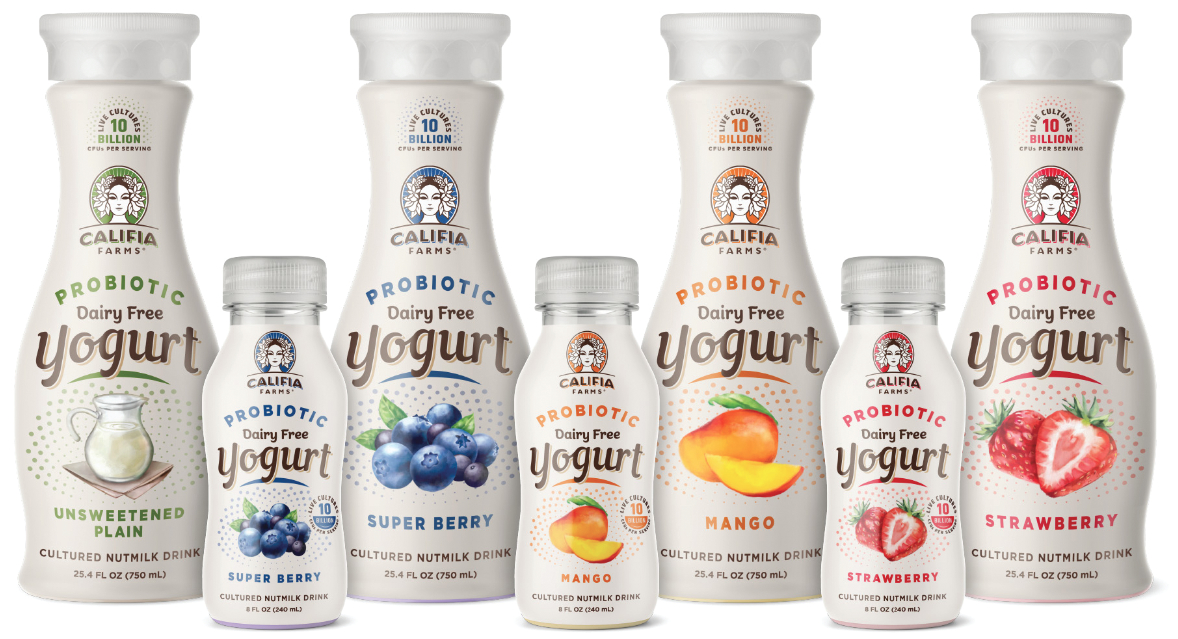 McConnell’s Fine Ice Creams, Santa Barbara, Calif., has reinvented everyone’s favorite treat with a line of dairy-free frozen desserts. After a process that took the better part of a year, McConnell’s co-owner and chef Eva Ein finally arrived at a product that met the company’s criteria.

“There’s nothing interesting or innovative about coconut cream, almond or cashew milk, or soy-based ‘ice creams,’” said Michael Palmer, co-owner and chief executive officer, when referring to the industry’s standard alternatives to dairy-based ice creams. “These are the same products that have been out there for years, and the results are rarely worth it.”

It is difficult to remove the coconut or roasted nut taste from a coconut cream or nut-based product, Mr. Palmer said. In attempting to do this, companies typically over-flavor their products, along with pumping these products full of air and stabilizers, which results in chalky, crumbly, inconsistent texture.

The base used in McConnell’s dairy-free line is made from a proprietary blend of 100% micronized pea protein. It is neutral in flavor and shares the mouthfeel — and many other characteristics — found in McConnell’s 18.5% butterfat ice creams.

“People who crave great ice cream want to taste great ice cream, whether it’s dairy-based or not,” Mr. Palmer said. “The last thing we want to have to do is apologize for giving customers a lesser experience. They shouldn’t have to settle.”