We use cookies to provide you with a better experience. By continuing to browse the site you are agreeing to our use of cookies in accordance with our Cookie Policy.
Home » Organic commodity prices mixed in May-June

Prices for organic food-grade hard red spring wheat were quoted at $16.59 a bu in the May-June period, down $3.33 from March-April but up 62c from $15.97 a bu a year ago amid steady trading, according to Mercaris data.

“Organic hard red spring wheat trade remained steady into June, with prices generally down from their peak at the end of the first quarter,” said Ryan Koory, Mercaris senior economist. “With spring wheat planting completed, weather is the factor to watch over the remainder of the growing season, as severe drought conditions developed last year significantly reducing spring wheat yields. Thus far, U.S. Drought Monitor data provided by the University of Nebraska-Lincoln indicates that soil moisture has remained sufficient this year across the Northern Plains states of Montana, North Dakota and South Dakota where the majority of U.S. organic spring wheat acres are located.

“Mercaris is of the opinion that spring wheat conditions are worth keeping an eye on this summer, as the combination of recovering yields and expanding acreage could result in a significant increase in spring wheat supplies for the 2018-19 marketing year.”

“Organic hard red winter wheat prices continued to decline in June following harvesting progress,” Mr. Koory said. “The Mercaris recorded average delivered hard red winter wheat price averaged $10.70 per bu over the May-June time period, down $2.78 per bu from the March-April time period. With harvest underway, the extent to which yields have been impacted this year by the severe drought conditions across the southern portion of the United States will begin to be fully understood. 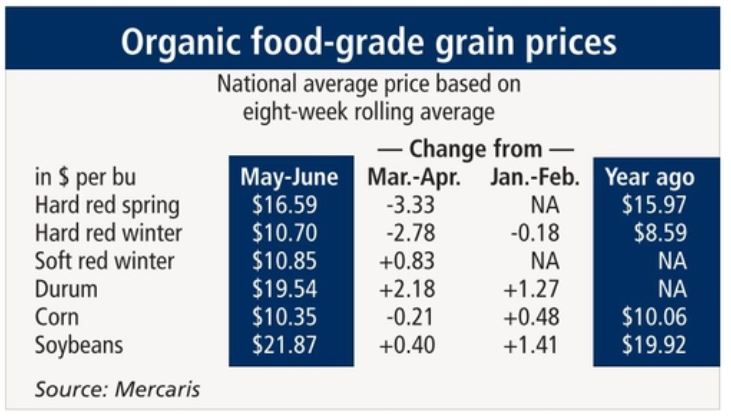 “Mercaris looks for organic winter wheat production to be mostly spared from the majority of the drought’s impact, as organic wheat is predominantly grown further to the north. Once harvest is complete and state-level yield data becomes available, Mercaris will assess the 2018-19 organic winter wheat crop and determine just how much supply the market will have to ration over the next year.”

Prices of food-grade organic durum jumped to $19.54 per bu in May-June, up $2.18 from March-April with year-ago quotes not available.

“Organic corn trade began to run slack again in June, with the Mercaris recorded delivered price averaging $10.35 per bu over the May-June time period,” Mr. Koory said. “Despite the slowing pace of trades, prices remained above the $10-per-bu range for the third consecutive month in June. At this point, contacts for fall new crop delivery are mostly settled with prices for fourth-quarter 2018 delivery averaging even with current prices at $10.35 per bu.

“Organic soybeans approached $22 per bu at the end of the second quarter, averaging $21.87 per bu over the May-June time period following a slight uptick in contracting activity over June,” Mr. Koory said. “Prices for new-crop fourth-quarter 2018 delivery are currently running at a notable discount at slightly below $20 per bu. However, purchasers may be preparing for tighter post-harvest supplies as contract prices for first-quarter and second-quarter 2019 delivery are currently running well above $22.50 per bu.