ZURICH, SWITZERLAND — Sales volume at Barry Callebaut increased 6.9% to 1,512,853 tonnes in the first nine months of fiscal 2018 ended May 31, driven by gains in all regions and product groups. Sales revenue, meanwhile, eased 0.2%, falling to 5,183.7 million Swiss francs ($5,186.2 million) from 5,193.5 million Swiss francs in the same period a year ago. The decline in revenues reflected lower raw material prices, which Barry Callebaut said it passes on to its customers.

“After the very strong performance in the first half of this fiscal year, we continued to see strong momentum in the third quarter, fueled by all key growth drivers, regions and product groups,” said Antoine de Saint-Affrique, chief executive officer. “Our volume growth was again significantly above the global chocolate confectionery market.”

Barry Callebaut said the average cocoa bean price increased by 19.9% in the first nine months of fiscal 2018, to £1,817 per tonne on May 31, 2018, which compared with £1,516 per tonne on Sept. 1, 2017. The recent price increase reflects lower-than-expected global cocoa surplus due to slightly lower cocoa production in West Africa, in combination with higher demand and significant fund activity, the company said. 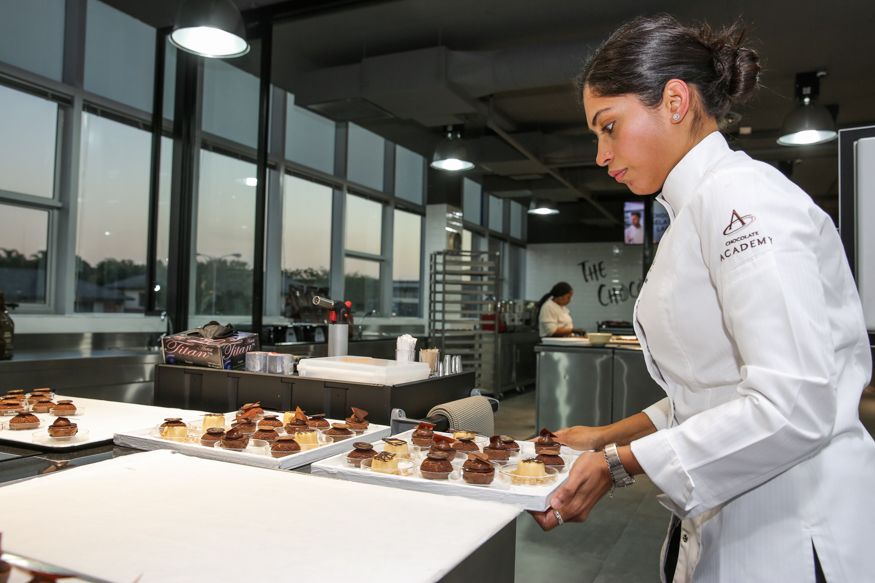 Barry Callebaut said it achieved several key milestones during the first nine months of fiscal 2018, including the opening of its first Chocolate Academy center on the African continent on May 8 in Johannesburg, South Africa. The company also announced the extension of its cocoa pressing capacities in Côte d’Ivoire and Cameroon.

In regard to sustainability, Barry Callebaut on June 4 signed three letters of intent with Côte d’Ivoire and Ghana to work toward the design and validation of a sustainable cocoa farming model.

On the innovation front, Barry Callebaut announced the extension of its dairy-free chocolate product portfolio in the United States. On July 18 the company debuted Callebaut Finest Belgian Chocolate ruby, also known as RB1, at an exclusive showcase in Hong Kong. The ruby chocolate will become available for artisan chocolatiers and chefs in September.

“We are proud to offer the chef communities in Hong Kong this fourth category of chocolate under the Callebaut brand and our Finest Belgian Chocolate range,” said Denis Convert, Barry Callebaut’s vice-president for gourmet in Asia Pacific. “Belgian chocolate has a solid reputation with an image of higher quality standards among the professional chocolate users in Hong Kong. The RB1 recipe has been crafted by the Callebaut chocolate makers in collaboration with Belgian chocolatiers to encourage creative freedom with its remarkable taste and color. It is low in sweetness, maximizing the fresh fruity character and sour notes.”