KANSAS CITY — The U.S. Department of Agriculture, in its July Livestock, Dairy and Poultry Outlook, forecast higher pork and beef production and lower prices for hogs and cattle in 2018 than in 2017. Previously, the U.S.D.A. estimated July 1 cattle-on-feed up 4% from a year earlier and the highest since the data series began 22 years ago, and the June 1 U.S. total hog inventory up 3% from a year ago and the highest since records began in 1964. Exports of pork and beef were forecast to increase from 2017, but tenuous trade relationships with some major export destinations add a level of uncertainty. As a result, there is no shortage of red meat.

The outlook for pork is perhaps the most difficult to discern, and the riskiest. The stakes are high since about 22% of total U.S. pork production is exported. The largest export market for U.S. pork is Mexico, taking 33% of the total in 2017, followed by China/Hong Kong at 20%

and Canada fourth at about 9%. Mexico imposed 10% tariffs on most U.S. pork on June 5 and increased those to 20% on July 5, although pork exports to Mexico were up about 5% in May, while exports to China/Hong Kong were down 45%. China’s duties on U.S. pork total about 80% when including a pre-existing 10% value-added tax along with two tariff increases.

Still, hog numbers keep increasing, although slaughter hog profits were forecast by one analyst at less than $2 per head in 2018 compared with $21 in 2017.

“The (hog) industry has been setting quarterly inventory records almost since 2015, and litter rates have been consistently breaking records, mostly since the early 2000s, interrupted only by serious disease outbreaks in 2014,” the U.S.D.A. said in its Outlook report. And there appears no let-up in sight. “One aspect of the report that likely fell outside most expectations was the extent of the expansion of the breeding inventory,” the U.S.D.A. continued, noting that the nation’s breeding herd on June 1 increased more than 3%, or by more than 200,000 head, more than 60% of which was in states proximate to new processing facilities in Michigan, Minnesota and Iowa. 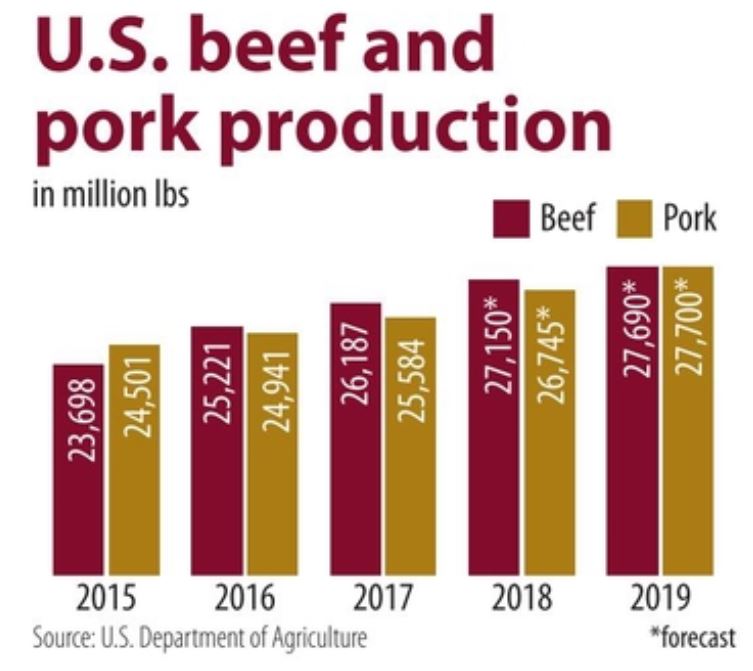 Beef should fare somewhat better, at least on the export front, with about 11% of total production exported. Japan was the largest importer of U.S. beef in 2017, taking 24%, followed by Mexico at 19%, South Korea at 16%, Hong Kong at 10% and Canada at 9%. Canada put a 10% tax on some U.S. beef, while China added tariffs of 37%. Beef exports have been higher than a year ago for every month (through May) of 2018, with May exports up 21% and up for all major destinations except Hong Kong (down 2%), the U.S.D.A. said. Demand has remained strong from the three major Asian markets of South Korea, Japan and Taiwan.

Placement of calves in feedlots, slaughter numbers and weights and ultimately beef supply have been affected by ongoing drought across parts of the Great Plains and the intermountain region, the U.S.D.A. noted in its Outlook report. That resulted in more cattle moved into feedlots at lighter weights that ultimately were sold for slaughter at lighter weights. The drought also contributed to increased cow and heifer slaughter as pastures could not support as many livestock, with cow slaughter expected to increase in the second half of 2018.

Total U.S. cattle inventory on July 1 was up 1% from a year earlier, suggesting the cattle herd still was growing but at a slower rate than in the past few years. Perhaps more importantly, the number of beef replacement heifers was down 2% from a year ago, suggesting the multi-year expansion was slowing or coming to an end, which will have a longer-term impact on beef supply.