WASHINGTON — U.S. Department of Agriculture forecasts on Aug. 10 for both record high U.S. soybean production this year and soybean carryover next year came at an extremely inopportune time as trade issues escalate with China, the largest buyer of U.S. and world soybeans.

In its Aug. 10 Crop Production report, the U.S.D.A. forecast 2018 U.S. soybean production at 4,586 million bus, up 4.4% from the prior record in 2017 and the third consecutive year of record outturn, if realized. In fact, U.S. soybean production has set records in four out of five years (including 2018), dipping only slightly in 2015, largely on soaring demand from China, at the same time as soybean production in Brazil has steadily increased to record levels, also feeding China’s voracious demand for protein to feed hogs and poultry.

The average soybean yield was forecast at 51.6 bus per acre, up 5% from last year and the second highest on record, and more than offsetting a 1% decline from 2017 in forecast harvested area at 88.9 million acres. 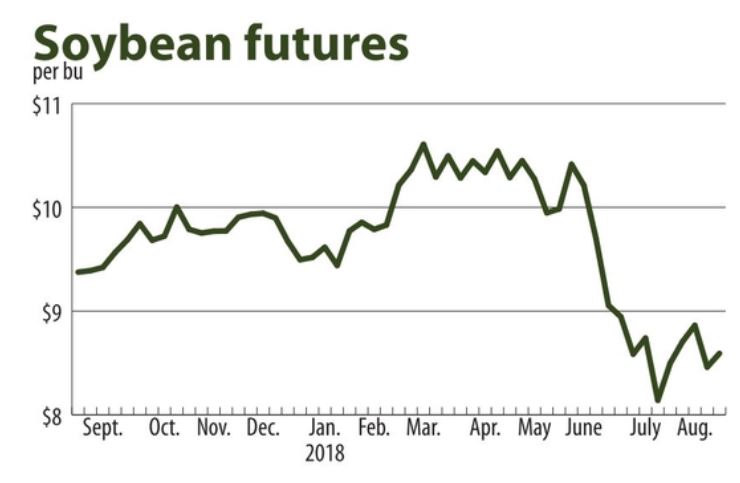 Although the 2018 carryover forecast was below trade expectations, the 2019 forecast exceeded both the trade average and the full range of expectations.

Corn futures also dropped after the reports, ending the day down about 11c a bu and the week (ended Aug. 10) down about 12c, or 3%, although prices also recovered some last week. The new-crop December corn future followed the same pattern as soybeans, holding above July lows while trading well below May highs.

It was the first survey-based corn and soybean production and yield estimates for the season, based on conditions as of Aug. 1.

While weather obviously will continue to play a role in final crop production and yield, U.S. corn is past its key pollination phase while soybeans still are in their key pod filling stages in the 18 major states.