We use cookies to provide you with a better experience. By continuing to browse the site you are agreeing to our use of cookies in accordance with our Cookie Policy.
Skip To Content
Home » Stillwater runs deep in the market for cannabinoid ingredients

Stillwater runs deep in the market for cannabinoid ingredients

The legalization is fueling innovation in the edibles market, which once was mostly limited to brownies and gummies. To make edibles, formulators, chefs and bakers often use cannabis extracts, which make it difficult to ensure quality product with a consistent dose of functional compounds.

One of those compounds is tetrahydrocannabinol (T.H.C.), which is the chemical responsible for most of cannabis’ psychological effects. The other is cannabidiol (C.B.D.), the non-psychoactive cannabis compound with medical benefits, including providing relief from anxiety, inflammation and seizures.

Food Business News spoke with Justin Singer, chief executive officer of Stillwater Foods, Commerce City, Colo., about the challenges and opportunities of being an early-mover in the market.

Food Business News: You started out in the consumer products business. When and why did you decide to start selling cannabinoid ingredients?

Mr. Singer: We launched a branded dissolvable called Ripple into the consumer markets in early 2017. By mid-2017 it was in well over 150 dispensaries and had built a reputation for its consistency, clean flavor profile and instant dissolvability.

It was around that time that people started to approach us and ask if we’d be willing to supply them with C.B.D.-only Ripple in bulk for use in other products like ready-to-drink (R.-T.-D.) beverages and baked goods. Most of these leads came with stories about other vendors they had tried to work with who’d fallen short on dissolvability, stability, flavor profiles, ingredient decks or customer service.

After 5 or 10 of these conversations, we realized we had created something with general applicability that could provide others with a simpler path to market. We’ve always viewed the cannabinoid market as a “rising tide” opportunity: The more quality food folks we can get involved, the better off we’ll all be. That belief made it easy to decide that an ingredient business was a logical next step in our company’s progression.

When you spoke at the Institute of Food Technologists’ annual meeting and food expo this past July, you said that you believe cannabinoids will be the next functional food ingredient. Please elaborate.

Mr. Singer: Cannabinoids, specifically non-psychoactives like C.B.D., represent a class of compounds with tremendous therapeutic promise combined with a low risk of dependence. In many ways, they fulfill the promise of functional ingredients in ways other ingredients can only dream of. They are being widely used to assuage a range of common health concerns, from mild anxiety to inflammation to pain, for which large swaths of consumers are already buying functional foods and beverages. As a natural substance, the fit with food, especially healthy, functional food, is obvious.

In a way, C.B.D. is everything turmeric and curcumin wants to be. That’s not to say it’s a miracle cure. I don’t believe there is such a thing, and you will never hear our company make claims as to specific effect, but the potential is as massive as it is undeniable. The C.B.D. and T.H.C. are just two of at least 100 identified cannabinoids. We are just scratching the surface of this compound class.

What ingredients do you sell and how do you ensure their consistency? 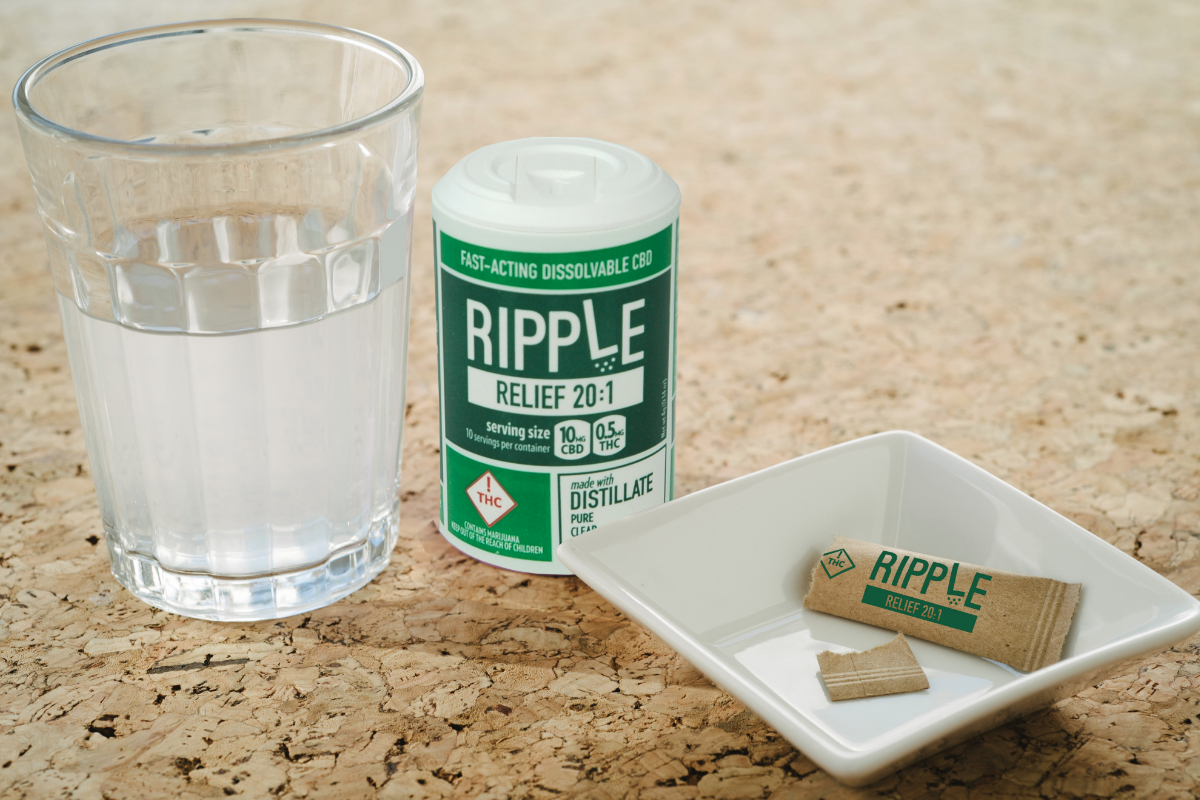 Mr. Singer: We offer water-soluble forms of hemp-derived C.B.D. tuned to fit our customers’ applications. Every ingredient we sell features a clean label, clean flavor and clean nutritionals. For R.-T.-D. manufacturers, we offer liquid concentrates that range from 10% to 25% C.B.D., with options for various matrices (e.g., high-acid, low-acid, fermented, spirits, etc.). We also offer a powder format in similar concentrations that can be used for anything from powdered drink mixes to baked goods. Finally, we offer a spray adhesion process that allows us to coat dry products like tea, nuts and dried fruits directly, with concentrations based on target-serving dose.

Consistency is the toughest nut to crack, but it starts with consistent inputs. We source C.B.D. isolate from a very small set of providers in Colorado. We prefer local vendors because it offers more visibility and control into our supply chain. Given how undeveloped and unregulated the supply chain is in general, we think it’s essential to source raw materials from regional suppliers who we can verify and meet our quality standards. Everything that comes in the door is tested by a third-party lab for potency, pesticides, microbials, heavy metals and residual solvents. We then re-test everything internally for potency to verify the results.

The next step is processing, where again, consistency is king. We’ve worked exceptionally hard to develop tight standard operating procedures built on food industry best practices. We’ve also developed a number of internal testing procedures to ensure consistency and quality at the microscopic level. We believe that consistency is found in the reduction of variance. We shoot for every batch to be the same as every other, no matter how deeply you examine it.

Are there any limitations to using the ingredients?

Mr. Singer: We’re working hard to better understand the parameters of shelf stability. So far, rancidity testing has shown that cannabinoids are surprisingly shelf-stable, even more so than traditional food oils like canola. There’s still a lot of work to be done in this area, but that will come with time. 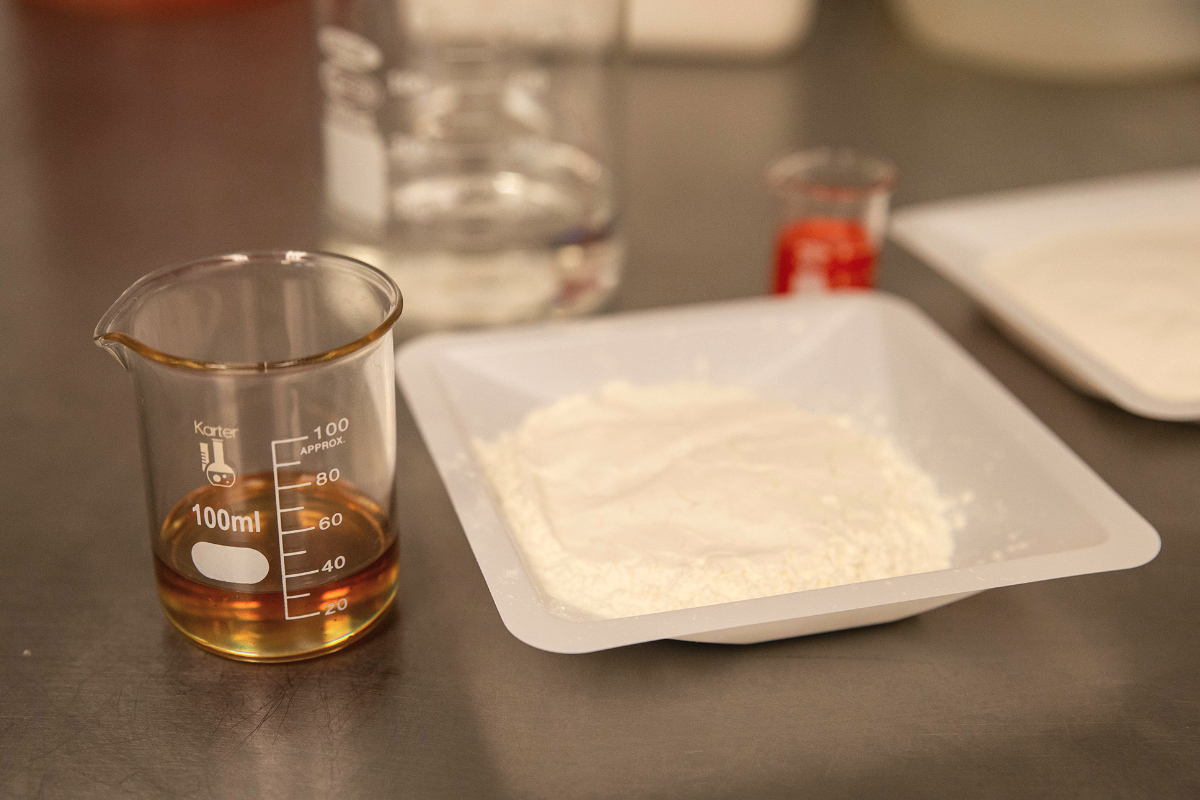 I wouldn’t say there are limitations on applications or processes, but they do demand tweaks to formulation. There are people out there selling water-soluble C.B.D. as if it were a commodity when the truth is that it’s a blanket term covering an enormous amount of nuance. What works in a spirit won’t necessarily work for a water-based beverage. What works best for hot beverages won’t necessarily work best for cold beverages. These things need to be accounted for at the outset.

Ultimately, we haven’t found a food form yet that we can’t infuse, but that doesn’t mean there’s not more to learn. Stability and consistency are very hard targets to hit. It takes time, conscientiousness, care and a lot of testing. With that in mind, we’re game to try almost anything.

Why does it make sense for food and beverage manufacturers to use cannabinoids such as Ripple S.C., versus simply using hemp?

Mr. Singer: Unprocessed cannabinoids present a number of issues for food manufacturers. Cannabinoid extract oil (the base ingredient) is highly variant, with concentrations varying wildly from plant to plant and batch to batch. These oils also have extremely strong flavor profiles, with intensely bitter notes that most consumers find unpalatable. Finally, cannabinoids are fat-soluble, which makes it extremely difficult to infuse them into a water-based matrix in any sort of stable way.

What’s more, the body has trouble absorbing fat-soluble compounds, leading to onset delays of two hours or longer as the compound passes through the digestive tract and gets processed by the liver. On the other hand, Ripple S.C. is water-soluble, clean tasting and consistent. Infusing it into a food product is no more difficult than adding a flavor. Want 10 milligrams of C.B.D. in a beverage without adulterating the flavor profile or creating an oil slick? Add 40 milligrams of 25% concentrate Ripple S.C. All it takes is a scale.

How does the consumer benefit from products made with standardized cannabinoids? 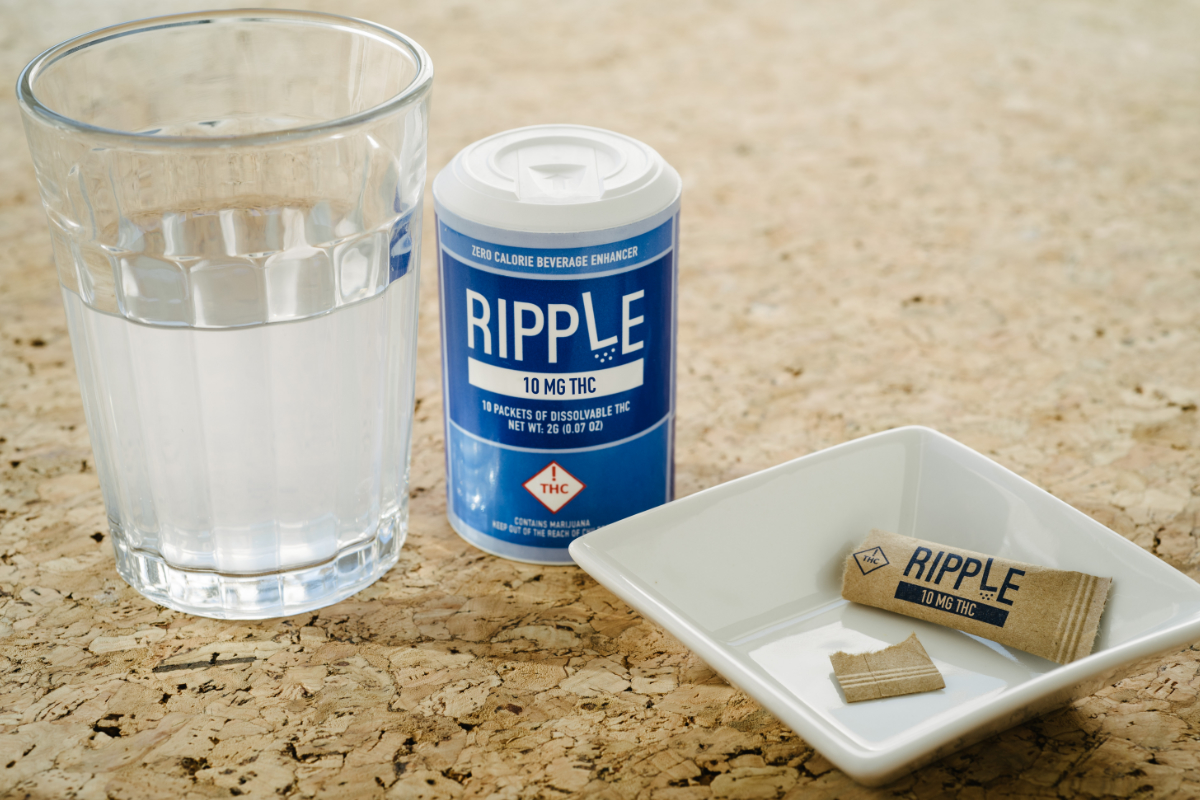 Mr. Singer: Trust, trust, trust. We survey our branded goods consumers religiously and their reasons for using Ripple all come back to trust. Consumers can trust that Ripple products will affect them the same every time because we’ve standardized our inputs. Cannabinoids can be scary, so it’s essential that people trust that they’re getting the effect they’re paying for. With so many out there making unfounded claims to consumers just looking to feel a little better, I think it’s more important than ever for high-quality manufacturers to distinguish themselves by offering standardized products consumers can count on to be what the label says they are. It’s not enough to brand quality, you have to execute it, too.

How are your ingredients different from others in the market?

Mr. Singer: As an ingredient, I think we differentiate ourselves in consistency, flavoring, stability and labeling. As a company though, I think our biggest differentiator is customer support. We are first and foremost a food company that works with cannabinoids, not a cannabis company that’s recently discovered food. Our head of research and development spent 20 years at a major food company as a senior food scientist in new product development. He knows the difference between what works in a lab and what works in a production environment.

Further, we know how to produce products without sacrificing quality. Our manufacturing team comes from the food industry, with more than 40 years of experience running national-scale production facilities. What’s more, our branded goods products are some of the most popular in Colorado, so we’ve been producing these products at scale for years already.

What regulatory limitations are there in the cannabinoid ingredients business? 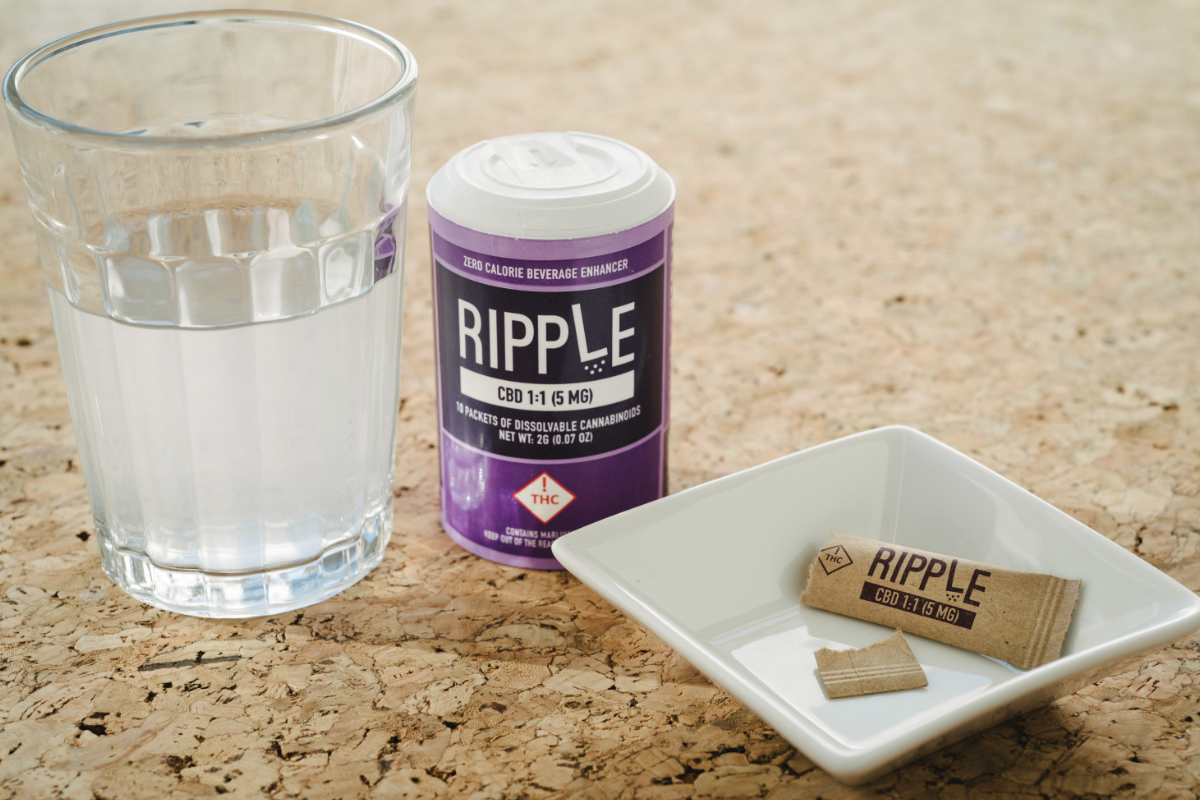 Mr. Singer: The regulatory environment for cannabinoids, even non-psychoactives like C.B.D., is murky at best. We strongly recommend that manufacturers and brands consult with their own counsel before embarking on this journey. I’m not here to tell you there’s no regulatory risk. Regardless of anyone’s interpretation of the law, the most accurate thing you could say is that it’s unsettled. However, if you decide that this is a risk worth taking, then we’re here to eliminate the execution risk. There’s nothing simple about this space, but the flip side of risk is opportunity. Choose your path wisely.

What are the biggest challenges this industry faces?

Mr. Singer: The uncertain regulatory environment is the mother of all problems. Once that’s resolved, the next phase will be a supply chain shakeout.

Generally speaking, the cannabinoid supply chain is years behind the food supply chain in terms of efficiency, traceability, sophistication and segmentation. It will take a long time to develop to a level on par with what large manufacturers require. In a way, the industry’s promise is its biggest impediment.

We have barely scratched the surface of these compounds’ potential, but already folks want to anoint them as a new holy grail. For me, I think they have the potential to make the lives of millions of people more pleasant, and that should be more than enough. There’s so much work left to do, if only we maintain the focus required to do it.