We use cookies to provide you with a better experience. By continuing to browse the site you are agreeing to our use of cookies in accordance with our Cookie Policy.
Home » Major sweetener moves in minor glycosides

KANSAS CITY — They are perhaps the sweetest parts of the stevia leaf, the steviol glycosides most closely resembling sugar in taste and function. Unfortunately, Rebaudioside M and Rebaudioside D also are “minor glycosides,” meaning they are found sparingly in the leaf, at less of a concentration than other glycosides such as Rebaudioside A.

“We support our customers with our application experts to find the right usage levels and blends at the targeted cost level,” Ms. Pueller said. “With a sweetness level of about 300 times sweeter than sugar, we can meet and beat the sugar price equivalency in applications.”

Tate & Lyle, P.L.C., London, uses a bioconversion process and aqueous-only finishing step to produce its Tasteva Reb M. The sweetener has a more sugar-like taste than other steviol glycosides such as Reb A and yields a clean sweetness and sweet onset like sucrose without the bitter linger of conventional stevia, according to the company.

“Our bioconversion process increases Reb M yields, allowing us to produce more volume not limited by plant yields and deliver more from the leaf at an acceptable cost in use,” said Abigail Storms, global vice-president, sweeteners platform leader at Tate & Lyle. 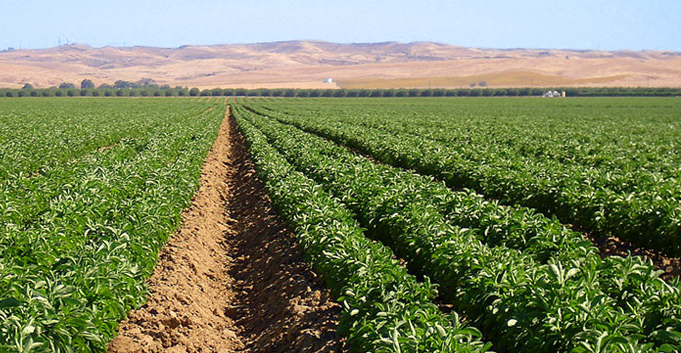 PureCircle, L.L.C., which has a U.S. office in Chicago, has developed a proprietary strain of the stevia plant called Starleaf stevia that contains greater amounts of Reb M than conventional stevia plants. PureCircle produces Reb M directly from the Starleaf stevia plant and from other stevia sweeteners in the plant. In the latter case, PureCircle starts with the purified stevia leaf extract with low Reb M content and adds an enzyme, which completes the maturation to Reb M.

Layn has launched Reb M and Reb D both as singular products and as components of other sweetener platforms where the glycosides significantly increase the quality of the sweetness profile without taking cost-in-use beyond budgetary constraints. Long-term investments in leaf breeding are designed to increase the levels of Reb M and Reb D in the stevia leaf.

“This process not only increases the amount of commercially available Reb M and Reb D but also decreases the cost,” Ms. Fernandez said.

Reb M and Reb D also may be created through the fermentation of baker’s yeast.

Minneapolis-based Cargill this year began producing EverSweet. The fermentation of baker’s yeast allows for larger quantities of Reb M and Reb D to be produced commercially in a more sustainable way, according to the company.

“Wherever sweetness is used, EverSweet can find a home there for sugar reduction,” said Andy Ohmes, global product line manager for high-intensity sweeteners at Cargill.

EverSweet is available in large enough quantities to support commercial launches, and full capacity should be reached next year, he said. EverSweet offers better upfront sweetness, no bitterness and more of a sugar-like taste, he said.

“That’s really why people are all excited about these minor glycosides,” Mr. Ohmes said.

Royal DSM, Heerlen, The Netherlands, showcased its Avansya Reb M at IFT18, the Institute of Food Technologists’ annual meeting and exposition held in July in Chicago. Avansya is the brand name for DSM’s line of sustainably produced, non-artificial sweeteners that allow for sugar reduction in a range of foods and beverages. The first product in the range is Avansya Reb M, a calorie-free steviol glycoside with a pure and clean taste, according to the company. It is produced through the fermentation of yeast. 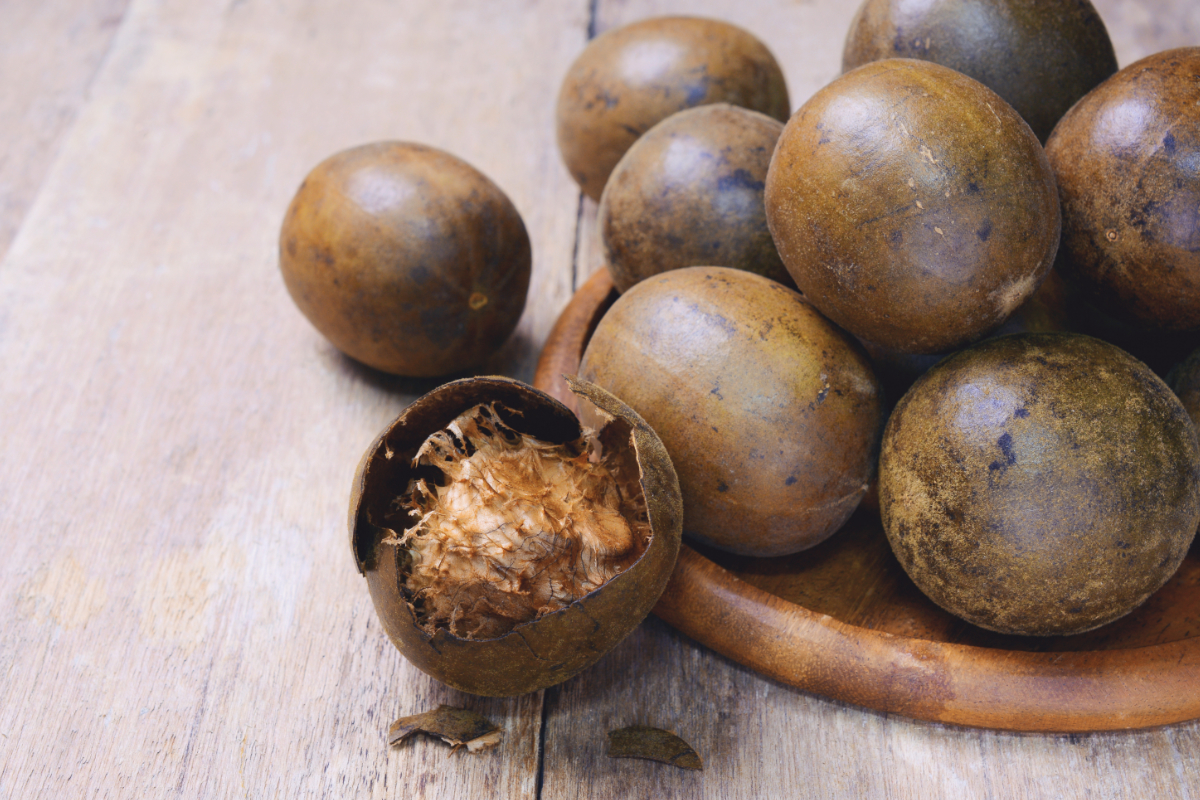 Along with innovating in steviol glycosides, sweetener suppliers are finding ways to combine stevia extracts with monk fruit extracts.

ADM offers SweetRight stevia and VerySweet monk fruit that pair together well in a number of applications, including yogurt and other dairy products, he said.

“And because monk fruit is slightly more expensive, ADM’s expertise in finding the right ratio can help achieve just the right balance of sweetness, calories, and nutrition and cost,” Mr. Holste said.

ADM also is working with Reb M and Red D.

“As an increasing number of consumers seek out better-for-you options that feature lower calories and closer-to-nature or pantry-friendly ingredients, ADM continues to innovate in the Reb M and Reb D category and beyond,” said Rod Schanefelt, director of sugar and high potency sweeteners. “Unique agricultural programs provide us with access to an assortment of high-quality stevia varieties, enabling us to offer the most comprehensive portfolio of stevia ingredients.”

Layn Corp., based in China, has launched the Lovia brand in North America to take advantage of the synergies between stevia and monk fruit, Ms. Fernandez said.

“Within this line, we’ve combined glycosides and mogrosides (from monk fruit) in ratios specific to various applications, including beverage, dairy and bakery, to provide a full well-rounded sweetness that cannot be accomplished with the use of these sweeteners on their own,” she said. 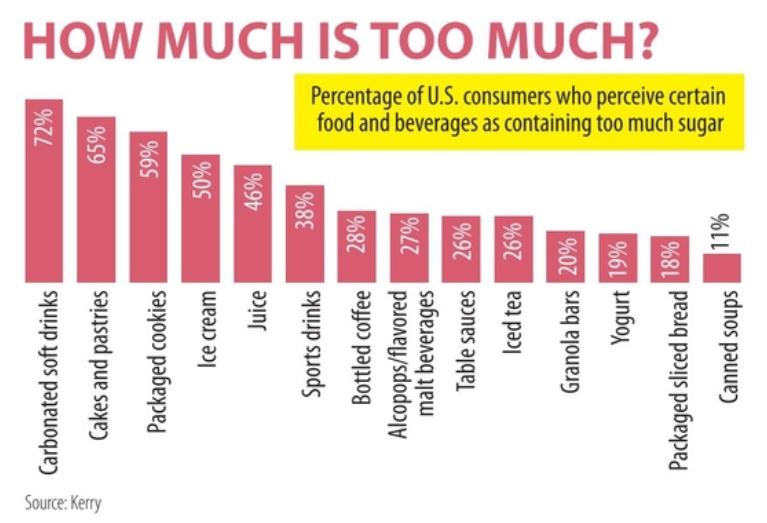 The food or beverage category, the country the item will be sold in and consumer perception of specific sweeteners all may be factors when choosing a high-intensity sweetener for reduced sugar applications.

Kerry, which has a U.S. office in Beloit, Wis., surveyed over 760 U.S. consumers and found 72% said they perceived carbonated soft drinks as containing too much sugar. Other categories at 50% or over were cakes and pastries at 65%, packaged cookies at 59% and ice cream at 50%. While people seek items with reduced sugar, 55% said they wanted such products to taste the same as full sugar products, which is where zero-calorie, high-intensity sweeteners may assist formulators.

The Kerry survey also investigated consumers’ awareness of sweeteners, including high-intensity sweeteners, and whether consumers perceive the sweeteners as natural.

Layn Corp., based in China, offers stevia and monk fruit sweeteners in regions such as Asia, Europe, North America and South America. The company has increased the size of its sales team in North America and moved to a larger office in Newport Beach, Calif., said Mary Joe Fernandez, vice-president of sales for the Americas and global accounts.

“Consumers’ desired sweetness intensity in North America is much higher compared with Europe and most Asian countries,” she said. “Meantime, the awareness and education of the potential harm of sugar or artificial sweeteners tops the world, and North America is leading the switch to plant-based sweeteners, no doubt. For the sake of health, consumers are willing to try and accept healthy food and beverages with 100% sweetness replaced by plant-based sweeteners, to achieve sugar reduction, while maintaining the original taste of products is more common in other markets.”

“South America as a whole is more familiar with the taste of sugar as opposed to high-intensity sweeteners in general,” Ms. Fernandez said. “For this reason, it’s important that products launched with stevia or monk fruit have a taste profile that mimics that sucrose-like well-rounded sweetness curve. This is where Layn’s new and innovative sweetener systems are allowing companies to successfully introduce products with deep sugar reduction that would not be nearly as well-received by the consumer if using traditional stevia extract products.”