We use cookies to provide you with a better experience. By continuing to browse the site you are agreeing to our use of cookies in accordance with our Cookie Policy.
Home » A conversation with Hershey's master chocolatier

A conversation with Hershey's master chocolatier

HERSHEY, PA. — Perhaps it was not a coincidence that Jim St. John’s first day on the job at The Hershey Co. was Halloween, the company’s most important event from a sales standpoint. It was just a Monday back in 1988, but it would be the beginning of a prolific career in candy making. Mr. St. John joined the company from General Foods, where he worked on the Baker’s chocolate brand. Prior to that, he was extracting uranium from phosphoric acid at Mobil Chemical Co.

“It’s so much better here.”

Over the years, Mr. St. John has held various roles of increasing responsibility on Hershey’s research and development team. In three decades, he has seen trends come and go.

“Whether it’s trends in nutrition or trends in flavors, that’s why I like working in this industry … consumers are changing all the time, and it’s exciting to chase after that,” he said. “Some things are more difficult to pull off than others, and it’s always great to have that challenge. It’s a great industry because of that, and we have a great time doing it, and I think at Hershey, because of our stable of brands, we are uniquely positioned in that way that we can play well in a lot of different spaces.”

In an interview with Food Business News, Mr. St. John discussed the challenges and highlights of making chocolate for the masses.

Food Business News: What does a day in the life of Hershey’s master chocolatier look like?

Mr. St. John: It varies a great deal. I do a few different things. Part of it is mentoring, where we have less experienced scientists who need help understanding the technologies we have, and the confectionery industry has a lot of technologies.

Part of it is doing my own research to develop new technologies that can help essentially launch new products but also may help with cost savings and quality.

In the past, I’ve worked on — and this goes way back — low-fat chocolate, for example, when fat was the big evil in the ‘90s. We were very keen on lowering the fat levels in chocolate. And then it became carbs, and we were very active in that area.

Also, I get called on to visit customers, so when we launch new products I’ll find myself going to major customers to do demonstrations and explain what the product is. The latest example of that might be Hershey’s Gold, our caramelized, sweet, crunchy product. It took some education for our customers to understand what we were doing and why we did what we did and why it’s good.

I have a personal affinity toward Hershey’s milk chocolate. I’ve worked on that for 30 years, and I have very strong emotions for that brand. I just think it’s a wonderful, sophisticated milk chocolate. People think of it as everyday because of its price point, but from an ingredient standpoint, it’s an expensive chocolate, but because of our economies of scale, we are able to offer it at everyday prices. I don’t think there is a chocolate in the world made at the scale that Hershey’s milk is made at. We can really do a great job and still make it affordable as it’s been affordable for the last 120-some years.

You really have a dream job.

Mr. St. John: It’s interesting work. I’m a chemical engineer by training, and there’s nothing wrong with the chemical industry. I won’t say anything bad about the oil industry, but their product line is kind of boring, and it doesn’t really change a whole lot. You come to the food industry, and consumers are kind of fickle. You’re chasing after what they want today. That’s an interesting thing to do. And it’s not easy to figure it out.

My chemical engineering professors were disappointed that I was going to a food company, and I have never regretted it, going into the food industry. I find it very fascinating.

And then on top of it, there are other food categories that may not be as fun as confection, so if you can work for the food industry, this is definitely the cool place to work.

Over the past 30 years, how have consumer tastes and trends evolved?

Mr. St. John: In the ‘90s it was about fat, and in the early 2000s it was about carbs, and we launched one-gram-sugar chocolate. I think calories has been something that’s always been there.

Premium chocolates, I’d say, 10 years ago started to be a big trend. We bought Scharffen Berger and Dagoba at that point.

I thought the origin chocolate trend was going to stay and was going to become like wine, where with wine it's about the grape type, and with chocolate, obviously there are different cocoa tree types, but it would be about the origin. You still see some higher-end products that talk about origin. But for the most part, that kind of faded away.

And the latest one is sugar. I’m not an expert on nutrition, but I’d say there’s probably more body of evidence against sugar than there was with fat. I think you’re going to find today there are more offerings of confectionery products with less sugar.

What’s the fad or trend after that? Boy, I wish I knew because I’d be working on it. 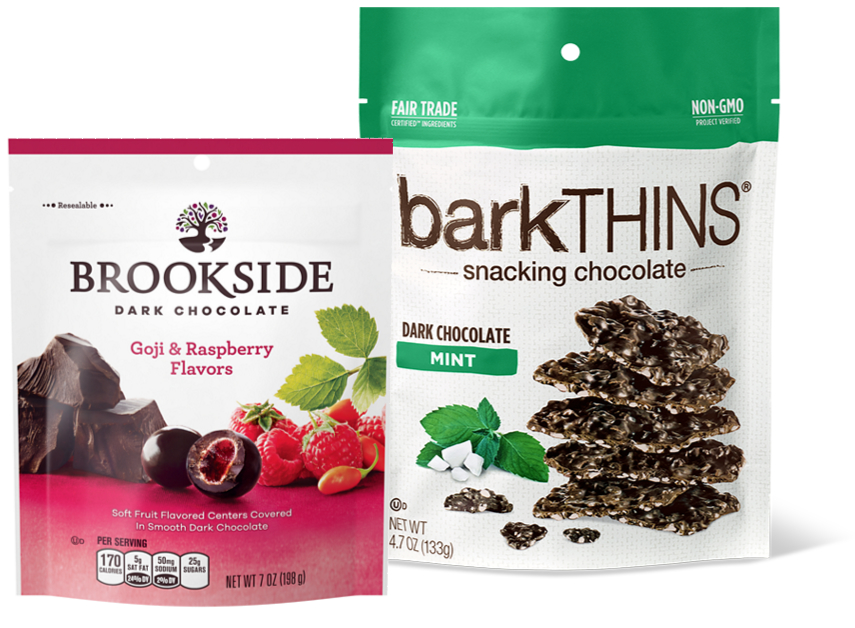 When you look at products like Brookside and barkThins, recent acquisitions of ours in the chocolate space, they’re going after trends that have been strong, and particularly barkThins bringing in some ingredients that you typically wouldn’t have had in chocolate before, like quinoa. I wouldn’t have expected that in the past.

Another trend could be spicy. With Dagoba, we have some offerings there. And then, of course, sweet and savory. Hershey has the original king of sweet and savory, and that’s Reese’s peanut butter cup. People have a tendency to forget that.

Other companies have been hitting that sweet/salty, sweet/savory area as well. I don’t think that will go away. I think that’s truly a trend, and it’s just going to grow, because it tastes really good.

Chocolate in general has the ability to match well with many things. I think Hershey is in a strong position because of that.

How does a company with so much brand equity like Hershey remain innovative and relevant?

Mr. St. John: We do a very good job in understanding the white spaces for our brands and focusing our efforts in those white spaces ... while keeping a very vigilant eye on the disrupters in the marketplace, who’s doing what. And they may create opportunities for us.

Sometimes you might end up buying those things, like we did with Brookside and barkThins. I think Brookside nailed the fruit and chocolate mix. We tried for years to understand how to do that and we couldn’t understand it at all. Brookside came out with something that consumers really love and understood.

We have a good handle on what consumers want, and we’re also good at making guesses at where they’re going to go. Sometimes consumers don’t understand where they want to go.

What will you be handing out to trick-or-treaters this Halloween?

Mr. St. John: We give out full-size Hershey, Reese, Kit Kat. And then typically Mounds and Almond Joy as well. I loved those when I was a kid. There’s still something about those for me.