We use cookies to provide you with a better experience. By continuing to browse the site you are agreeing to our use of cookies in accordance with our Cookie Policy.
Skip To Content
Home » Cauliflower is not the next kale. Here’s why

Cauliflower is not the next kale. Here’s why

CHICO, CALIF. — Cauliflower continues to gain steam as a stand-in for grains in numerous new products introduced this year. The versatile vegetable has masqueraded as rice, pizza crust and baking mix in reduced-carb formulations.

“The trick was to get them crispy,” Amy Lacey, founder and chief executive officer of Cali'flour Foods, told Food Business News. “Early on when we did crackers, we started with taking pieces of the crust and making them into crackers … but they weren’t as crispy as I wanted them to be. I wanted them to be as crispy as a Wheat Thin.”

The company uses no fillers or anti-inflammatory ingredients in its products — an important requirement for Ms. Lacey, who transformed her diet after a Lupus diagnosis.

“It has a really nice texture and crunch to it, and it’s still natural, low-carb, lactose-free, wheat-free, gluten-free, grain-free, and that’s very important for me and for other consumers like myself,” Ms. Lacey said of the crackers.

Cauliflower Thins are available for purchase online at califlourfoods.com and amazon.com and eventually will roll out to retail shelves, Ms. Lacey said. Participants at upcoming industry trade shows, including Winter Fancy Food Show and Natural Products Expo West, also will be able to taste the products.

“I love online direct-to-consumer because it allows us to get feedback immediately,” Ms. Lacey said.

“The beautiful thing about cauliflower — and this is why I think our portfolio will keep growing — is cauliflower takes on whatever taste you put with it,” Ms. Lacey said. “It’s a very bland vegetable. A question I get a lot is, ‘Do you think this is like the kale revolution, where it will rise and then fall?’ And I don’t think so. I’m almost 100% sure that it’s not going to happen that way. Because kale is bitter, and I can’t imagine having something sweet, like a sweet kale pizza crust. It just wouldn’t work. It’s such a strong taste. Whereas cauliflower takes on whatever flavors you put with it.”

To demonstrate the flexibility of cauliflower, Ms. Lacey has penned a cookbook that is slated to debut early next year. “Cali'flour Kitchen: 125 Cauliflower-Based Recipes for the Carbs You Crave” features step-by-step inspiration for pizza, lasagna, enchiladas and more.

“We’ve experimented with cookies and all kinds of things,” Ms. Lacey said. “Through this cookbook, we’ve discovered things that would be easy to put out in market and be very successful.” 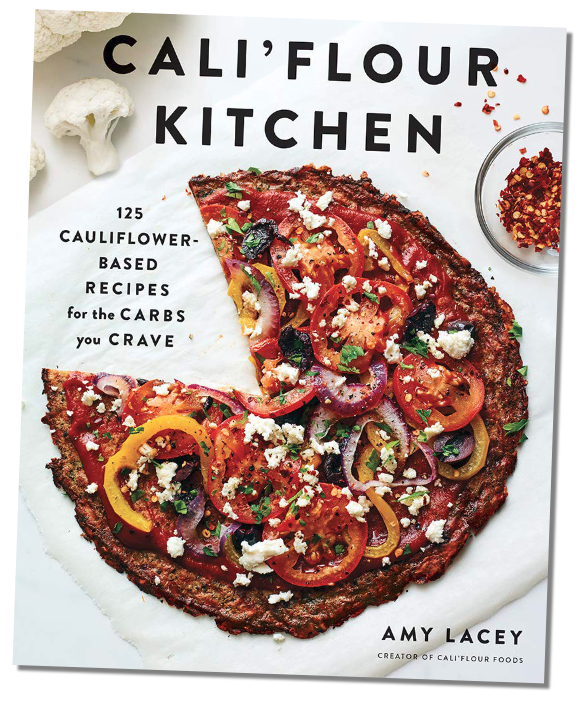 It’s no coincidence the book’s launch date is in January, when many consumers vow to eat healthier. Ms. Lacey said the month has been significant for her business.

“In 2017, we sold more in January than we did the entire year of 2016,” she said. “In January 2018, we had over 1,000% growth over January 2017. January is a big month, and we’re gearing up for January because this January we were not prepared. We ended up doing $1.6 million in direct-to-consumer sales this January. It was a crazy amount of growth.”

In the pizza category and beyond, several competitors have emerged with cauliflower-based products, including Kraft Heinz Co. and B&G Foods, Inc. A key point of differentiation for Cali’flour Foods is a commitment to simple ingredient formulations, Ms. Lacey said.

“Our mission is to bring awareness to reading labels,” she said. “Simple. Less is more. Less ingredients and clean ingredients.”