We use cookies to provide you with a better experience. By continuing to browse the site you are agreeing to our use of cookies in accordance with our Cookie Policy.
Home » Applegate’s bacon specialization

AUSTIN, MINN. — With the increasing migration to organic and natural products in the food industry, and particularly in the meat and poultry industry, one company is taking advantage of this large-scale trend. Applegate Natural and Organic Meats is leading the way when it comes to organic and natural bacon. And pork giant Hormel Foods Corp., Austin, Minnesota, which acquired Applegate three years ago and operates it as an independent brand, is benefiting from the consumer shift in food preferences.

With all the types of meats Applegate sells, including bacon, the company features two lines in its products -- natural and organic. “We’re the No. 1 natural and organic meat brand – and that holds in the bacon category as well,” explains Leah Sbriscia, associate product manager for Applegate, which is based in Bridgewater, New Jersey. The brand is 31 years old and was founded in 1987, as an independent company, with the idea of creating meat products as naturally as possible. During the summer of 2015, Applegate Farms was acquired by Hormel for $775 million. Three years ago, Applegate, now a Hormel brand, had annual sales of about $340 million. Applegate has 133 employees currently, but the number is growing.

According to Hormel, the idea behind acquiring Applegate, the leading organic, value-added prepared meat brand, was to give the brand a faster path to expanded offerings in this high-growth category, as growing numbers of consumers continue to choose organic and natural food products. At the time, Stephen McDonnell, Applegate founder and long-time CEO, said it was his mission from the start to change the way “we think about meat – how it’s raised and produced” – and the sale to Hormel was a continuation of that mission.

When Applegate was acquired, its products included bacon, deli meat, traditional Italian meats, burgers, breaded chicken, breakfast sausage, hot dogs, corn dogs, cheese, grilled chicken strips and dinner sausage products. That hasn’t changed much. But there’s no doubt that bacon is really the leader when it comes to the Applegate lineup of natural and organic meats.

“Bacon is a category that continues to grow,” Sbriscia says. “The bacon buzz is not slowing down.” She predicts the category is on track to reach sales of $5 billion by the year 2020.

The growth leader in the natural bacon category is Applegate Naturals No Sugar Bacon, launched last year. “Today, more than ever, consumers are aware of their sugar intake. The NPD Group reports that 65 percent of adults want to cut down on or completely avoid sugar, and that a number of popular lifestyle programs, like Whole30 and Paleo, stress no added sugars.”

Sbriscia says Applegate bacon products are on-trend with what consumers want today. The company offers all its bacon products in two main lines: Applegate Naturals and Applegate Organics. Within those two lines, the bacons include both pork and turkey. “Our full product line for bacon consists of eight retail products,” Sbriscia says. They include: Applegate Naturals Sunday Bacon, Naturals No Sugar Bacon, Naturals Thick Cut Bacon, Naturals Turkey Bacon, Organics Sunday Bacon, Organics No Sugar Bacon and Organics Reduced Sodium Bacon. “What we call ‘Sunday’ bacon is our signature cut, a traditional bacon style that we sell in both organic and natural,” she says. 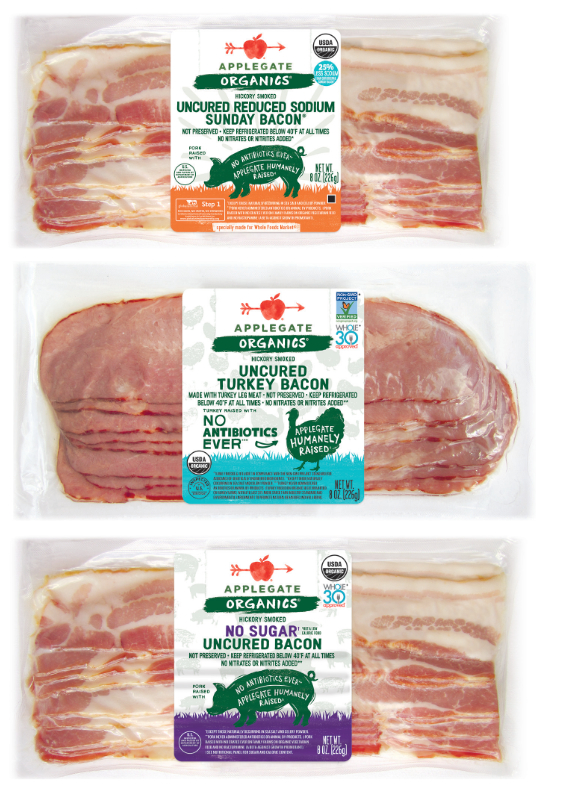 There is also an increasing demand for turkey bacon that the company has become more heavily involved with. “About one-third of our bacon portfolio is turkey bacon,” Sbriscia says.

Sbriscia also talks about the rapidly growing organic trend in general, and how bacon has become such a big part of it. “Organic continues to grow at retail – there’s a proliferation of organic products available that are different from what are called ‘natural’ products. Today, you see more and more mainstream retailers, not just specialty retailers, offering organic products and creating organic sets within their stores,” she notes. “The Organic Trade Association reports 82 percent of US households are purchasing organic products.” She says Applegate has been a big supporter of USDA organic regulations and requirements, although the agency has been in the process of backing away from some of those requirements.

How is natural bacon different? Sbriscia admits that the term “natural” can be confusing. “With no set definite standards for what ‘natural’ really means, companies can call their products ‘natural’, but don’t deliver on it. When natural refers to foods, it means minimally processed, and having ‘clean’ ingredients. For Applegate, ‘natural’ means there’s an extensive list of ingredients that aren’t allowed in our products. No nitrates or phosphates. No chemical additives. No preservatives other than salt or vinegar,” she says. The company follows strict standards for both its organic and natural lines, including 100 percent vegetable diets for its animals, and on the organic side, grains fed must be organic.

She also points out differences between Applegate bacon and commodity bacon. “One hundred percent of our supply is third-party certified. All our bacon is sourced from suppliers who raise their animals with No Antibiotics Ever and meet our Applegate humanely-raised standards.” These standards also include no growth hormones, no animal byproducts, more living space for the animals to engage in natural behaviors, promote natural growth, and receive environmental enrichments for pigs and poultry. For pork, the company does not use crates, no tail docking or teeth clipping, more solid flooring, and longer farrowing and weaning periods.

For turkeys, the company requires its farmers to offer the birds more space, a lighting system to reduce stress and promote natural growth, minimal beak conditioning and no toe alterations. Most of the farmers raising the animals for Applegate bacon are based in the US and Canada, with a small number in the United Kingdom. The turkey farms are largely in the Mid-Atlantic region. Total number of pork and turkey farms exceeds 1,800.

One hundred percent of the pork bacon comes from pork bellies, no other cuts. All the bacon processing is done through a co-packer chosen for its willingness to conform to Applegate’s processing standards. Sbriscia says the company has specific requirements for pork bellies. For processing, the bellies are injected with brine water and salt, sugar and celery powder. The bacon is hardwood smoked – no liquid smoking is done – then sliced and packed out.

Applegate also has a very specific consumer audience for its bacon products. “When we look at who wants to buy our bacon, that’s why we have the two lines – organic and natural,” Sbriscia points out. “One of our two major consumer groups we call the ‘committed cultivators.’ They are customers seeking organic and natural foods, very specifically. The second group we call the ‘better-for-you believers;’ these are families that seek out very clean bacon products in a big way,” she adds. “As far as increased costs for products, consumers looking for these kinds of products, including millennials, vote with their dollars. Our customers want the organic and natural products – what kind of food products they want for themselves and their families are a very high priority.”