We use cookies to provide you with a better experience. By continuing to browse the site you are agreeing to our use of cookies in accordance with our Cookie Policy.
Home » Excess rainfall mars harvest of large soybean, corn crops

KANSAS CITY — Several days of heavy, widespread rainfall across parts of the highly-productive Corn Belt stymied corn and soybean harvest the week of Oct. 8, may affect quality and likely will result in a downward adjustment to production estimates in November. The rains, and some snow in northern portions of the Upper Midwest, came at the worst possible time for farmers trying to harvest what is expected to be a record-large soybean crop and the second largest corn crop ever.

The U.S. Department of Agriculture, in its Oct. 9 Crop Progress report, said corn in the 18 principal states was 34% harvested as of Oct. 7, compared with only 21% at the same time last year and 26% as the 2013-17 average for the date. The harvest was about a week ahead of average overall, although the pace had slowed in top-producing Iowa with 15% completed, up slightly from 11% a week earlier and 13% as the average, compared with much larger advances in most other states, especially in the eastern Corn Belt.

Soybeans in the 18 major producing states were 32% harvested as of Oct. 7, falling slightly behind 34% at the same time last year and 36% as the five-year average, the U.S.D.A. said. Harvest had been a bit ahead of the average pace the prior week.

Farmers tend to be more concerned about soybeans than corn in part because soybeans do not withstand harsh conditions, especially snow, as well as corn handles tough weather. At the same time, soybeans require a bit longer to dry in the field so pods can be properly separated from the beans during combining.

Farmers also must consider what to do with this year’s crops, especially soybeans, since the United States is in what may be a protracted trade war with China, by far the largest soybean importer in the world. New export sales to China basically shut down a few months ago as China placed tariffs on U.S. soybeans in retaliation to tariffs imposed by the United States on imports of Chinese goods.

Adding to concerns for both corn and soybeans this year is the shear size of the crops, which also lengthens the harvest time, as well as already ample soybean stocks and a slow pace of soybean export sales, which is directly related to the trade war with China.

The U.S.D.A., in its Oct. 11 Crop Production report, estimated 2018 soybean production at a record 4,690 million bus, down slightly from the September forecast but up 6% from 4,411 million bus in 2017. The average yield was estimated at a record 53.1 bus per acre, up 0.3 bu from September and up 3.8 bu from 2017. Harvested area was lowered slightly from September. The U.S.D.A. production estimate was based on conditions as of Oct. 1, before most of the arrival of the rain and snow that delayed the harvest and may threaten quality.

Soybean export sales have sharply lagged year-ago levels. Although the 2018-19 marketing year is young (began Sept. 1), U.S. soybeans inspected for export for the season as of Oct. 4 totaled 3,540,940 tonnes, down 35% from the same period last year, according to the U.S.D.A. In comparison, corn export inspections for the marketing year to date (also began Sept. 1) were up 62% and wheat inspections (marketing year began June 1) were down 29%.

Even more striking, outstanding soybean sales to China for the current marketing year as of Sept. 27 totaled 1,198,900 tonnes, down 85% from the same period a year ago, and there were no sales to China on the books for next year. 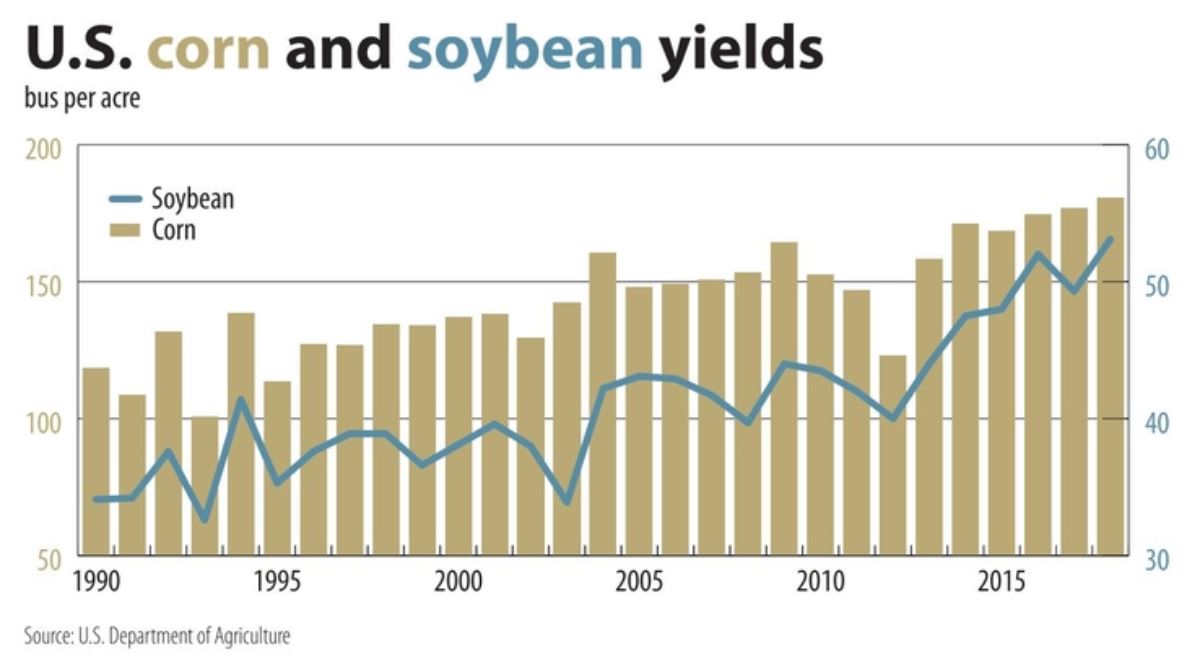 Despite the dark clouds hanging over farmers, some remain confident the trade war with China will be worth it in the long run. Even though many trade groups have decried President Donald Trump’s methods and the potential fallout from a protracted trade war, some individual farmers in Iowa last week told Food Business News, “It’s the right thing to do,” suggesting they were willing to “ride it out” to ultimately get better prices and to not be so dependent on a single customer — China.

Corn and soybean prices, meanwhile, have stabilized and held up better than expected ahead of harvest. This is especially the case for soybeans, considering the crop lost its top market and the harvest of a forecast record-large crop is underway. Futures for both crops set lows in July (front-month basis) on pressure from Chinese tariffs, with nearby November soybeans setting a fresh low of $8.12¼ per bu on Sept. 18, although prices have traded mostly in a range from $8.25 to $8.75 per bu since late August. Analysts note that soybean prices have been bolstered in part by new export sales to other countries, which have been able to buy U.S. soybeans at a discount because of the Chinese tariffs. Corn and soybean futures also firmed modestly after the Oct. 11 crop report with U.S.D.A. estimates coming in below the average of trade expectations for both production and yield of both crops.