CHICAGO — Bacon. It’s one of the few foods that is both salty and sweet at the same time, while also delivering an unrivalled dose of savory umami.

It’s practically all protein and fat, with many varieties welcomed by those following low-carbohydrate, paleo and keto diets.

It’s one of life’s guilty pleasures, and its popularity shows no signs of abating. And adding flavor to this satiating food increases its uses and applications.

This is something Chef Peter Sherman, owner of BarBacon in New York City, knows well. He makes bacon the star, serving it in everything from appetizers to desserts.

One of his originals is Kentucky Fried Bacon (K.F.B.) Bites, which are bite-sized crispy pieces of battered thick-cut bacon served like chicken nuggets. The inch-long chunks are dusted in flour, dipped in egg and covered with panko crumbs. After deep frying, they are covered with Thai chili honey and served with house pickles. 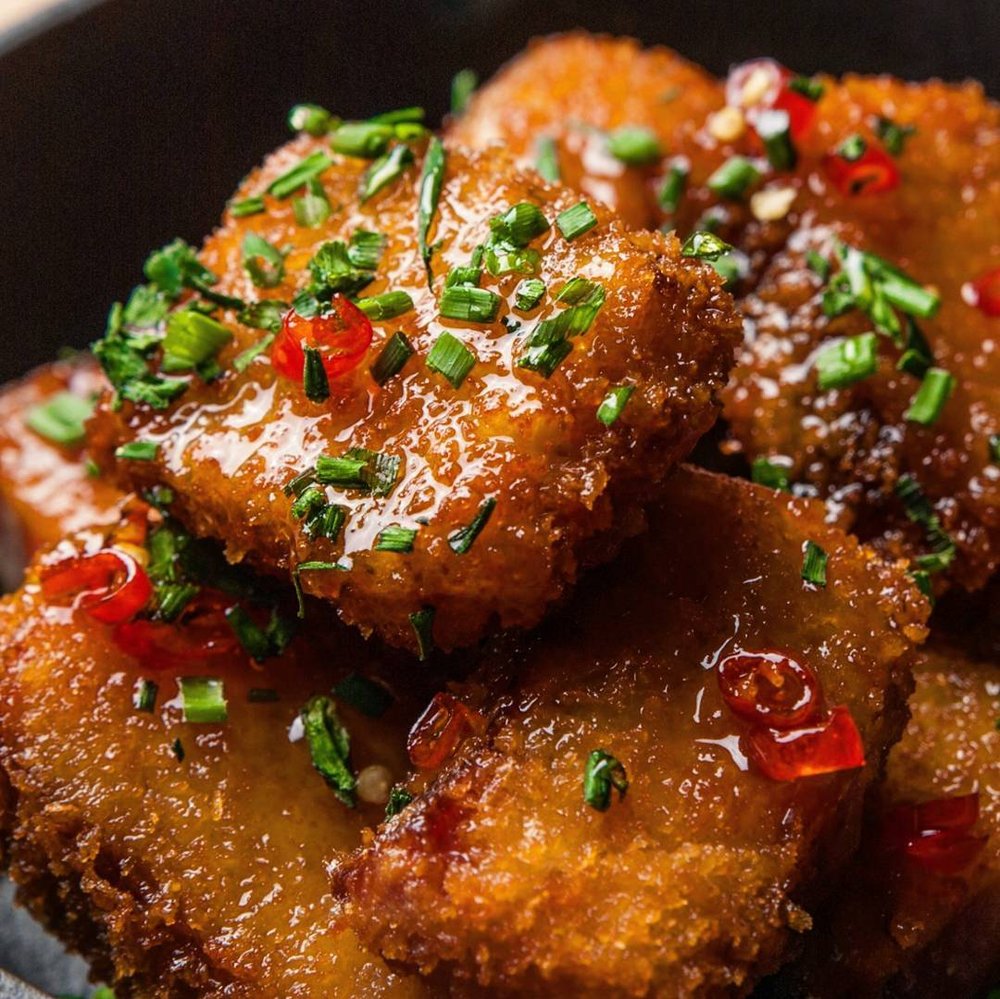 Flavors or seasonings may be added to the batter or breading. The drizzle can be any sauce or even a dusting of herbs and spices that adsorbs onto the crispy crust.

In addition to being an appetizer, K.F.B. Bites are served in a pretzel bun with ginger sage pork sausage and pineapple jalapeño slaw. They can also be found covered with pickled vegetables, cilantro, basil, mint and spicy aioli in a Banh Mi sandwich.

Another BarBacon specialty is its flight of four flavored bacons, alone or paired with samplings of craft beers. Mr. Sherman works with purveyors across the country, tasting endless bacon samples to decide the varieties to feature at varying times during the year.

“My objective is to elevate bacon into an artisanal product," he said. "It has to have a culinary purpose. It does not need to be pork, but it has to taste like bacon. The cure is important.”

The bacon flight starts with a mildly flavored slice – such as pecan wood smoked – and ends with some kick. This typically includes a black pepper-encrusted variety as well as a jalapeño-infused bacon.

Other featured bacons may include applewood smoked, maple glazed and corn cob smoked. The latter, as the name suggests, is bacon smoked over a bed of corn cobs. This renders a stronger smokiness than most hardwoods, with a touch of sweet corn aroma.

Culinary professionals such as Mr. Sherman are embracing the fact that bacon’s unique sweet, salty, savory taste and chewy yet crispy texture melds well with all types of flavors. And consumers are often willing to explore unfamiliar and ethnic flavors when they are delivered on a familiar food, such as bacon. Bacon’s composition and form functions as an ideal vehicle for flavor innovation.

“Bacon – it’s not just for breakfast anymore,” said Jodi Schwalbe, global marketing manager of smoke and grill for Red Arrow Products. “Flights of bacon for an appetizer, garnishes for cocktails, bacon jam, bacon crumbles on desserts ... not only is bacon appearing on all menu dayparts but it is showing up on store shelves.” 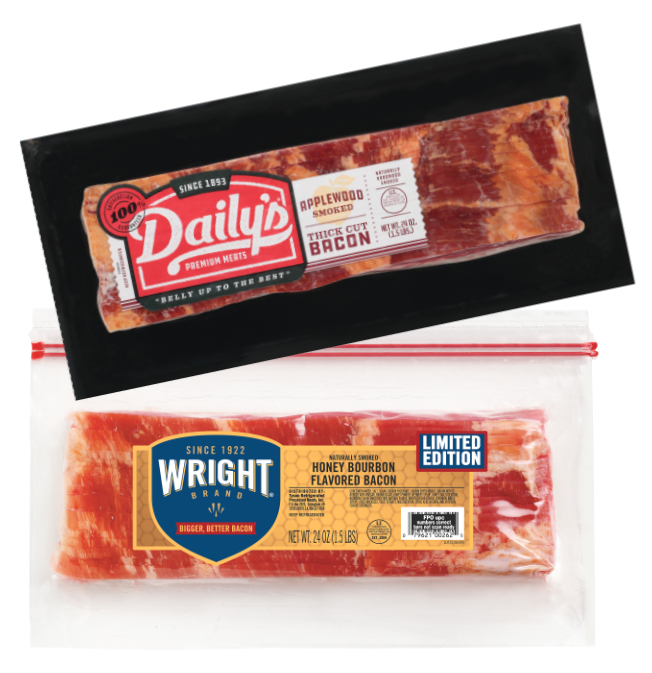 Flavoring expands uses and allows chefs to differentiate. Home cooks are inspired to get creative beyond the morning meal.

There are four basic methods to add flavor to bacon, and oftentimes multiple approaches are used to add many layers of flavor, sometimes even color and texture, too. Pork belly is traditionally cured by a marinade of salt, phosphates, nitrates and usually some sugar. This cure produces the authentic bacon taste Mr. Sherman requires of the more than 700 lbs of bacon BarBacon serves each week.

Flavor may be injected through the curing brine. This can come from simply replacing granulated sugar with a more flavorful sweetener, such as brown sugar, honey or maple syrup. Flavor extracts may also be included in the marinade. This is often how chili pepper heat, such as ancho, chipotle and jalapeño, is added. It’s important that the flavoring ingredients stay soluble in the curing brine so that it’s evenly dispersed.

Brine viscosity also influences flavor absorption and retention, even with injected products. With cured bacons, the sodium nitrite may impact the flavoring ingredients.

After curing, bacon is usually smoked. This not only sets the red color produced by the cure, it also adds the characteristic smoky flavor associated with bacon. Varying the source of smoke creates distinctive flavor, and depending on how long the bacon is smoked, the amount of smokiness will range from mild to strong. Instead of smoking bacon by physically placing it in a smoker, bacon can also be injected with smoke flavors.

Rubs are another way to add flavor. These may include all types of seasonings, with large particles providing eye appeal.

Topical sugary glazes, which yield what is known as candied bacon, allow for lots of innovation. The sweetener source contributes flavor, while also acting as an adhesive to deliver flavor extracts and hold topical seasonings. 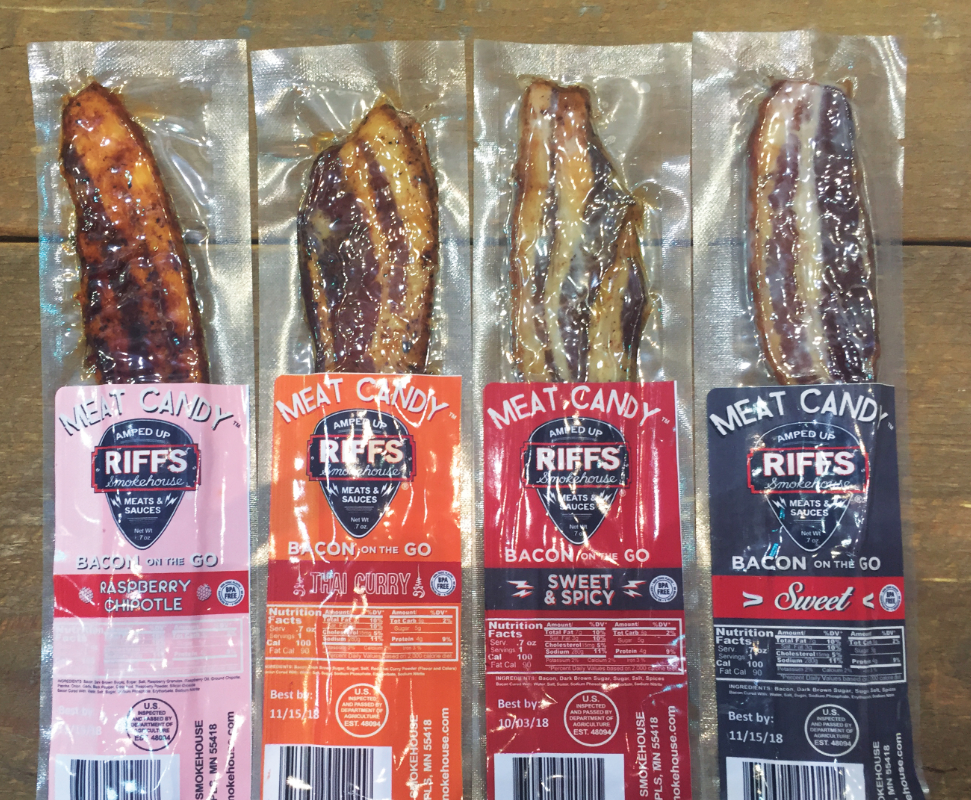 Minneapolis-based Riff’s Smokehouse now offers Riffs Meat Candy. It’s bacon on a stick. The snack is designed to be microwaved for 15 seconds and consumed warm.

The Sweet variety is simply coated in a wood-smoked brown sugar glaze, while Sweet & Spicy is that same glaze with the addition of a five-pepper blend. Other varieties blend characterizing flavorful ingredients into the glaze. Innovations include Asian, sesame, Cajun spice, coffee, habanero and Thai curry.

Another spin is chocolate or caramel coating the bacon, turning it into a dessert. BarBacon serves chocolate-coated bacon dusted with pink peppercorn and a side of bacon-infused whipped cream. The latter is a special blend of liquid bacon fat aerated with whipping cream.

It starts with the smoke

“As backyard smoking becomes more of a mainstay activity and not just a passing trend, consumers are becoming more observant of varying smoke nuances in their meats,” Ms. Schwalbe said. “Naturally, this applies to bacon as well. We work with processors to create a customized smoke unique to their brand.”

Robert Johnson, business development director at Red Arrow Products, said, “Smoking bacon has become an intersection where science and artistry have truly come together. At no other time have so many tools been available to manufacturers to customize and differentiate their items to cater to specific customers and market segments.

“That said, smoke can be added in or on the product and layered to develop the depth, complexity and specific nuance desired. Specific wood smoke species each have individual character. For example, apple, which has long been considered to be a premium smoke for bacon, imparts a well-rounded, slightly sweeter profile than for example, hickory which is a rich, robust smoke that may linger.” 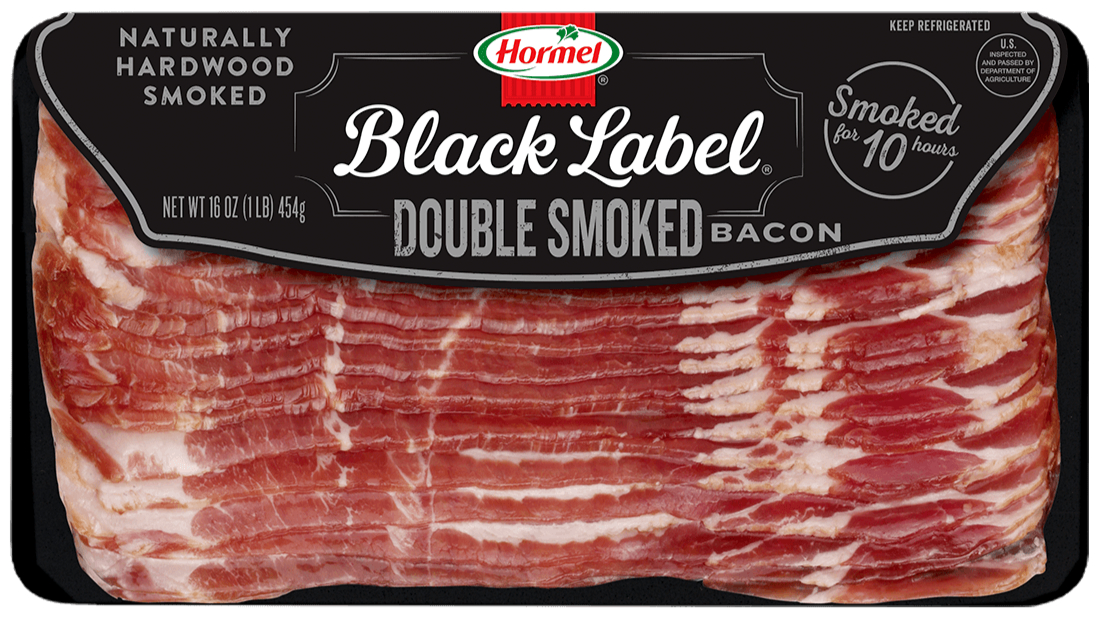 Mike and Lynette Sloan, owners of Hermann Wurst Haus in Hermann, Mo., smoke sugar-cured bacon over hickory logs procured from a local tree farm. The seven-year-old butchery team also produces a variation of this flavor by hand rubbing it with black pepper prior to smoking. Some of their other specialties include applewood-smoked cinnamon bacon, which is a sweeter variety with hints of apple pie spice. There’s a hickory-smoked Mexican-style bacon made by hand rubbing traditional Mexican seasonings on each slab before a six-hour smoke on hickory wood, as well as a hickory-smoked bacon hand rubbed with sun-dried tomatoes and basil.

In general, hickory smoking wood creates the flavor most consumers associate with bacon. It’s mid-range in terms of smokiness, as well as slightly sweet.

Mesquite, on the other hand, is recognized as the strongest smoky flavor and is more associated with barbecue than bacon. But that does not deter processors. Soarin’ Swine mesquite bacon from BaconFreak.com is salty, smoky and savory, as its infused with paprika, cayenne pepper, garlic and mesquite.

“Even though mesquite is not widely used in bacon, when blended or used in conjunction with other smokes, it intensifies the aromatics, sweetness and ashy character of the bacon,” Mr. Johnson said. “Combinations of these smokes and the time or quantity used can dramatically alter the perception of the product.” 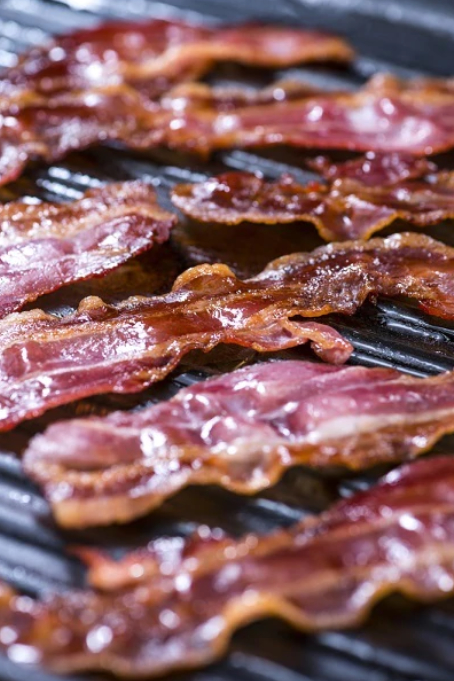 Both applewood and cherrywood contribute characteristic sweet, fruity nuances, while pecanwood, also considered a fruit wood, layers in some earthy, slightly nutty notes. As does oak wood, which is often used in combination with fruit woods to add a medium smoky dimension but also great by itself.

“As with numerous culinary creations, creating layers of flavor seems to be in keeping with how smoke can be incorporated into the bacon as a smoked ingredient, or transferred onto the surface of the belly via showering or atomization and additional smoke can be sprayed directly onto slices prior to final packaging. Spraying smoke onto microwaved, pre-cooked bacon aids in flavor and helps with cooked appearance uniformity across the entire slice making it more uniformly attractive.”

Because we eat with our eyes first, topical seasonings are increasingly used on bacon to lure the consumer through visual appeal.

In small, craft operations, rubs are applied manually, often before smoking. Commercial operations typically use an automated shaker. Another option is the use of transfer film for post-smoke application. This process has the seasoning embedded in the packaging, and when it’s vacuumed and sealed, the seasoning is adsorbed by the bacon, coating it evenly. 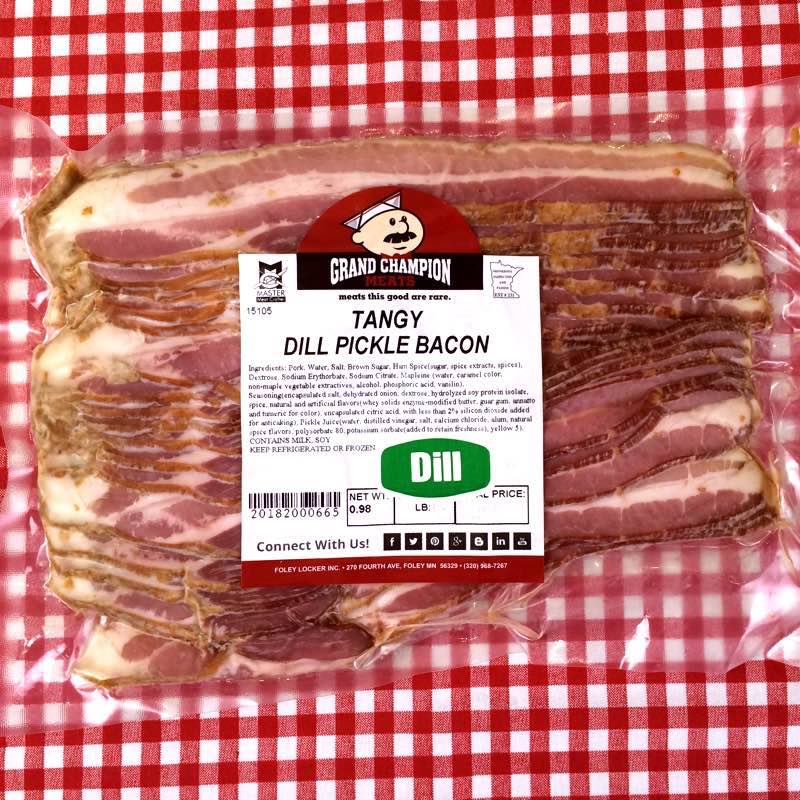 Grand Champion Meats produces an array of hand-seasoned bacons. This includes a buttery prime rib bacon where a traditional beef rub is applied to the belly prior to slow smoking. The company has also offered apple cinnamon, pumpkin pie and tangy dill pickle seasoned bacons.

When topical seasons are applied, challenges may be encountered during the slicing operation. It’s easier to maintain integrity with thicker slices. That’s because large particles may separate from the bacon and sometimes the slicing knives wear out from the spice particles. Some fine particle seasoning blends may absorb moisture on the bacon and give it a muddy look and color.

“Though many flavors and seasonings pair very well with bacon, adoption and costing are not without complications,” Mr. Johnson said. “Depending on the means of flavor incorporation, labor requirements, as well as product and/or manufacturing, line segregation may be necessary. Flavor and physical spice carryover may require a complete wash down, at the very least.”

Another consideration is the fact that 100% of the belly does not result in top-grade slices, with as much as 20% of the belly downgraded into an alternative product such as bits or chips. Many of these flavors do not easily convert into such products.