We use cookies to provide you with a better experience. By continuing to browse the site you are agreeing to our use of cookies in accordance with our Cookie Policy.
Skip To Content
Home » Strong demand offsets ample beef and pork supplies

Although the U.S. Department of Agriculture, in its Nov. 15 Livestock, Dairy and Poultry Outlook, slightly trimmed from October its forecasts for 2018 and 2019 beef and pork production, forecasts for pork and total red meat production still were record high for this year with beef, pork and total red meat also record high for next year. Beef production in 2018 is expected to be up 2.8% from 2017 and the second highest on record after 27.1 billion lbs in 2002 and in 2019 is forecast up 3.3% from this year.

The U.S.D.A. lowered from October its beef production forecast for 2018 by 30 million lbs to 26.9 billion lbs and lowered its 2019 forecast by 100 million lbs to 27.8 billion lbs. The reduction was the result of expected lighter fed cattle slaughter based on lighter placements of cattle into feedlots in the third quarter of 2018, which will be marketed for slaughter early in 2019. Still, total cattle on feed were record high as of Oct. 1, which will keep beef production at a high level early in the year.

Resilient beef demand in the second half of 2018 allowed wholesale choice beef cutout prices to avoid the seasonal third-quarter slump of 2016 and 2017, the U.S.D.A. said. Prices held well above year-ago levels despite higher year-over-year third-quarter 2018 beef production and expected higher outturn in the fourth quarter. 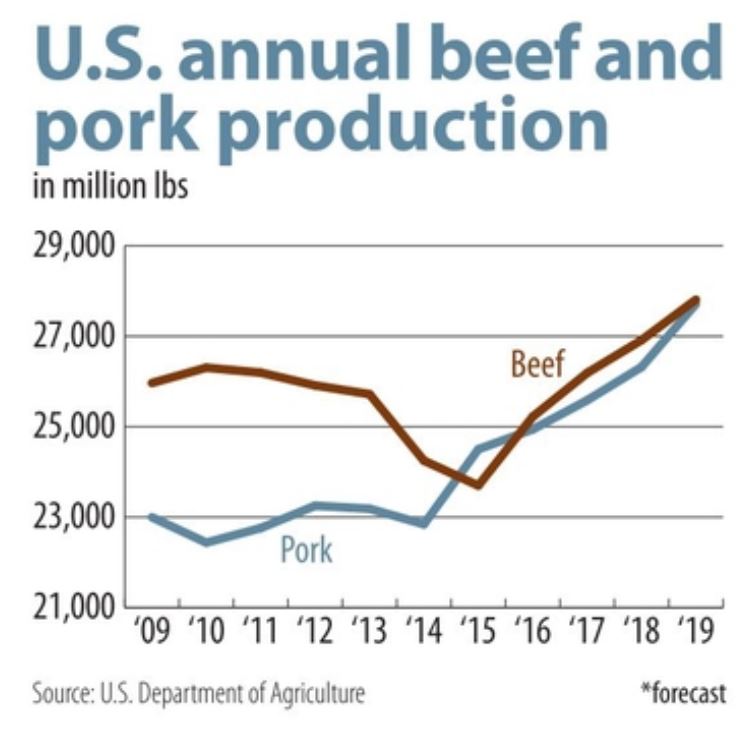 U.S. beef exports were record high at 826 million lbs in the third quarter, up 11% from July-September 2017, and were up 13% year-over-year for the first three quarters. Third-quarter export increases mostly were to the markets of South Korea, Japan and Taiwan, the U.S.D.A. said, although exports to Hong Kong increased in September after five consecutive months of below-year-ago levels. The U.S.D.A. raised from October its fourth-quarter 2018 beef export forecast by 15 million lbs and raised its 2019 export forecast by 20 million lbs.

Strong domestic and export demand also has supported pork prices amid record production, although unlike beef, values are down from a year ago. The third-quarter pork cutout averaged around $73.67 per cwt, down 18% from a year earlier. The U.S.D.A. forecast fourth-quarter U.S. pork production at a record 7,035 million lbs, down slightly from the October forecast but up 3.5% from 2018. Pork production for 2018 was forecast at a record 26.3 billion lbs, down 105 million lbs from October but up 2.9% from 2017, due to “recent and ongoing industry expansion.” For 2019, pork production was forecast at 27.7 billion lbs, up 5% from this year.

“It is especially notable that so far, pork demand appears to be more than keeping pace with production increases,” the U.S.D.A. said, noting that fourth-quarter 2018 and 2019 pork ending stocks are expected to equal 7.5% of fourth-quarter production, both the lowest since 1990.”

As with beef, pork exports also have been strong. Third-quarter exports were 1,295 million lbs, up 5% from the same period last year, according to U.S.D.A. data. Mexico remains the largest importer of U.S. pork despite retaliatory tariffs that have been on most U.S. pork items since early June, although third-quarter exports to Mexico were down 6% from last year. Third-quarter exports to China/Hong Kong were down 29% from a year ago but increases of more than 20% were recorded for South Korea, Colombia, Australia, Honduras and Dominican Republic. Still, the U.S.D.A. left unchanged from October its November forecasts for fourth-quarter 2018 and full-year 2019 U.S. pork exports.

Rabobank, in its recent Animal Protein Outlook for 2019, forecast 2019 U.S. beef production up 3% and pork outturn up 5% from 2018. The U.S.-China trade war, and the outbreak of African Swine Fever in China’s hog population will reduce pork supplies in China, the report said.