KANSAS CITY — The outlook for the frozen food category has gone from bleak to bright, from slipping sales to sales growth.

“I see years and years and years of runway in frozen,” said Sean M. Connolly, president and chief executive officer of Conagra Brands, Inc., Chicago. “Frozen is a big piece of real estate in the grocery store that just recently is beginning to undergo the kind of modernization that it needs, and I think there’s a long way to go there.”

His comments came in a June 27 earnings call to discuss Conagra’s planned acquisition of Pinnacle Foods, Inc. for $10.9 billion. The acquisition was finalized in October. The combined company will be the No. 2 player in frozen foods with $4.9 billion in sales, Mr. Connolly said. The Pinnacle Foods’ portfolio includes the Birds Eye brand, which will join such Conagra brands as Banquet and Healthy Choice.

“The industry together is doing a great job in making this turnaround happen,” said Skip Shaw, president and c.e.o. of the association. “The innovation we’re seeing from our brands in both product development and packaging demonstrates success in meeting the needs of a changing consumer base and aligning frozen offerings to their new demands.

“There are many new frozen food brands and product lines that are now catering to a wider variety of cultures and dietary requirements. Whether someone is looking for vegan, ethnic, gluten-free, organic or antibiotic-free meat, the frozen food aisle has it all, and more.” 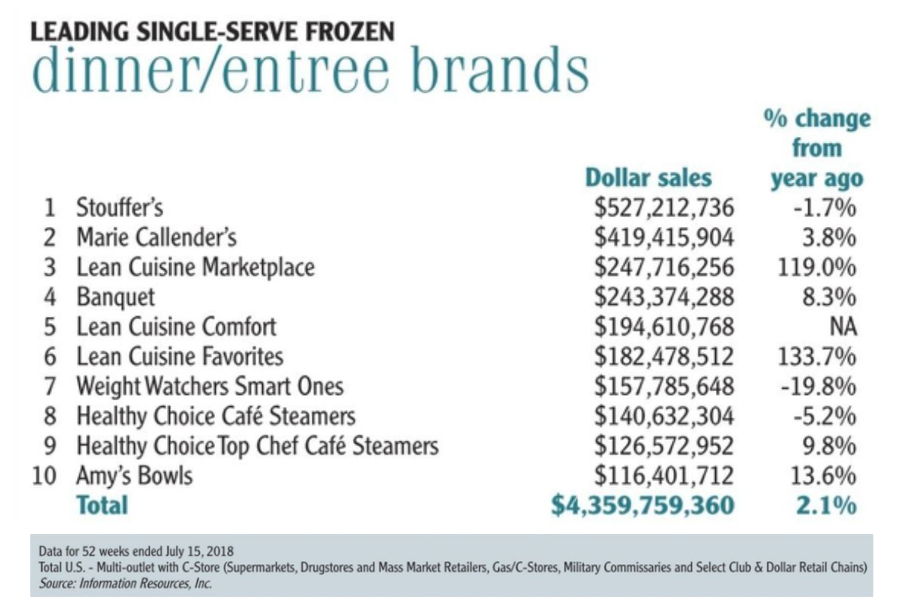 Nestle S.A., Vevey, Switzerland, introduced a Fit Kitchen line under its Stouffer’s brand this year to address demand for products with higher protein and healthier carbohydrates. Nestle hoped the launch will ignite sales for Stouffer’s, the category leader in both multi-serve frozen dinners/entrees and single-serve frozen dinners/entrees, according to Information Resources, Inc., a Chicago-based market research firm.

In single-serve frozen dinners/entrees, sales for the Stouffer’s brand dipped 1.7% to $527.2 million, but increased 2% to $4,359.8 million for the overall category according to I.R.I.

Sales for Hot Pockets, a Nestle brand, increased 3.1% to $655.3 million in frozen, hand-held entrees (non-breakfast), according to I.R.I.

“Hot Pockets are moving into two interesting consumer trend categories,” said Rui Barbas, Nestle USA’s chief strategy officer, in an Aug. 1 interview with Food Business News. “One is snacking, which we all know is a high growth territory in America. The second element is high protein propositions. So you see the new Hot Pocket range has enhanced protein content, which is very important in today’s diet.” 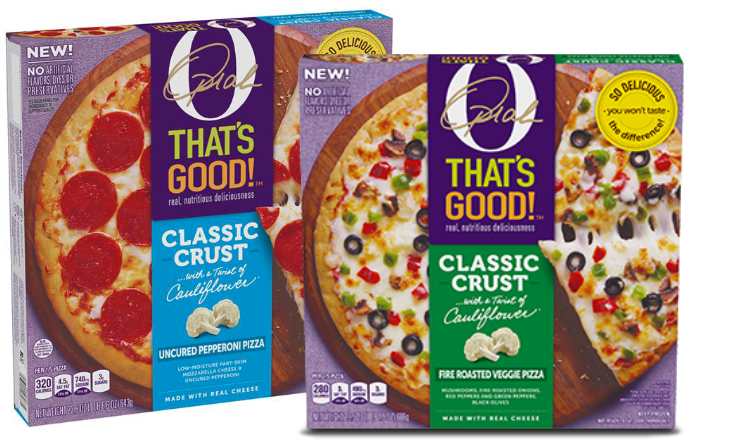 Kraft Heinz Co., Pittsburgh, and Oprah Winfrey innovated in frozen pizza through their joint venture, Mealtime Stories, L.L.C. Under the joint venture’s O, That’s Good! Brand, a new frozen pizza had a third of its crust made from cauliflower. Varieties include pepperoni, five cheese, supreme and fire roasted vegetable.

B&G Foods, Parsippany, N.J., continued to have success with its Green Giant brand acquired from General Mills, Inc., Minneapolis, in 2015. 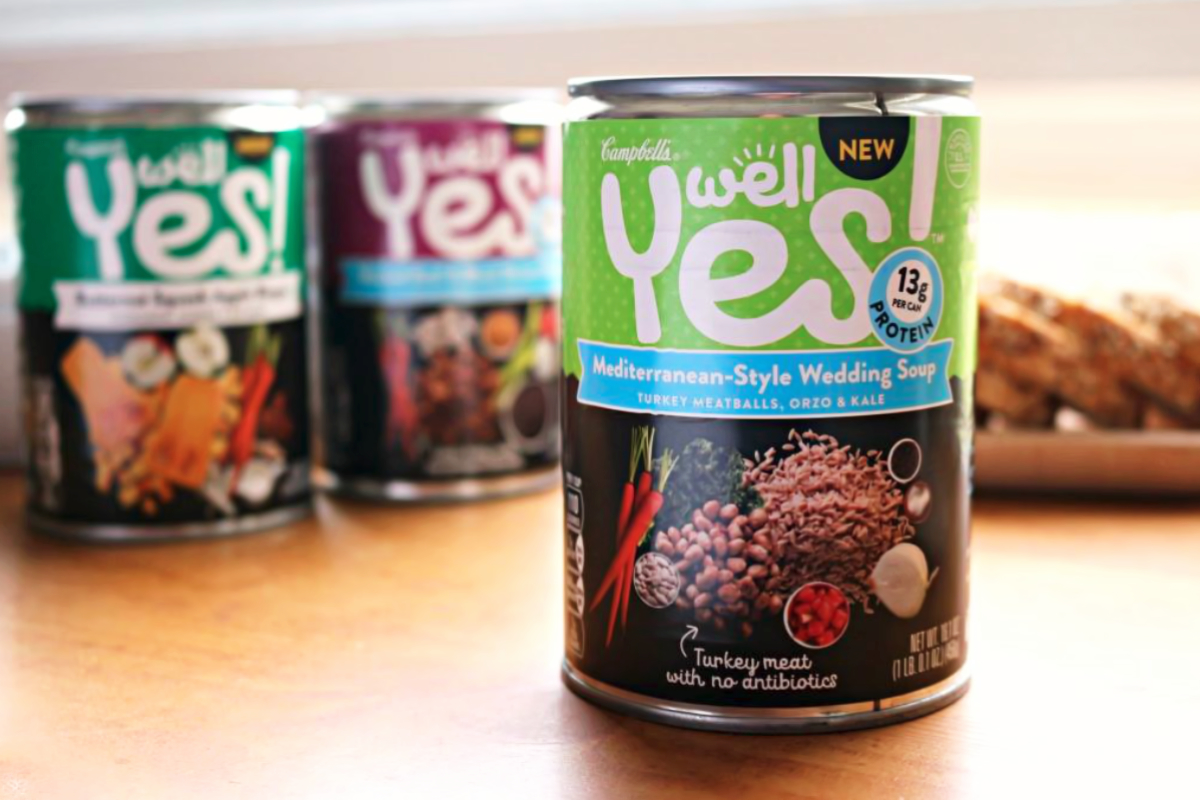 Management comments and the sales figures were not as optimistic for soup, especially for category leader Campbell Soup Co., Camden, N.J. Excluding the benefit of Pacific Foods of Oregon, which Campbell acquired in December 2017, U.S. sales of the company’s soup declined 14% in the fourth quarter of the fiscal year ended July 29, 2018, driven by weakness in condensed soup, ready-to-serve soup and broth. 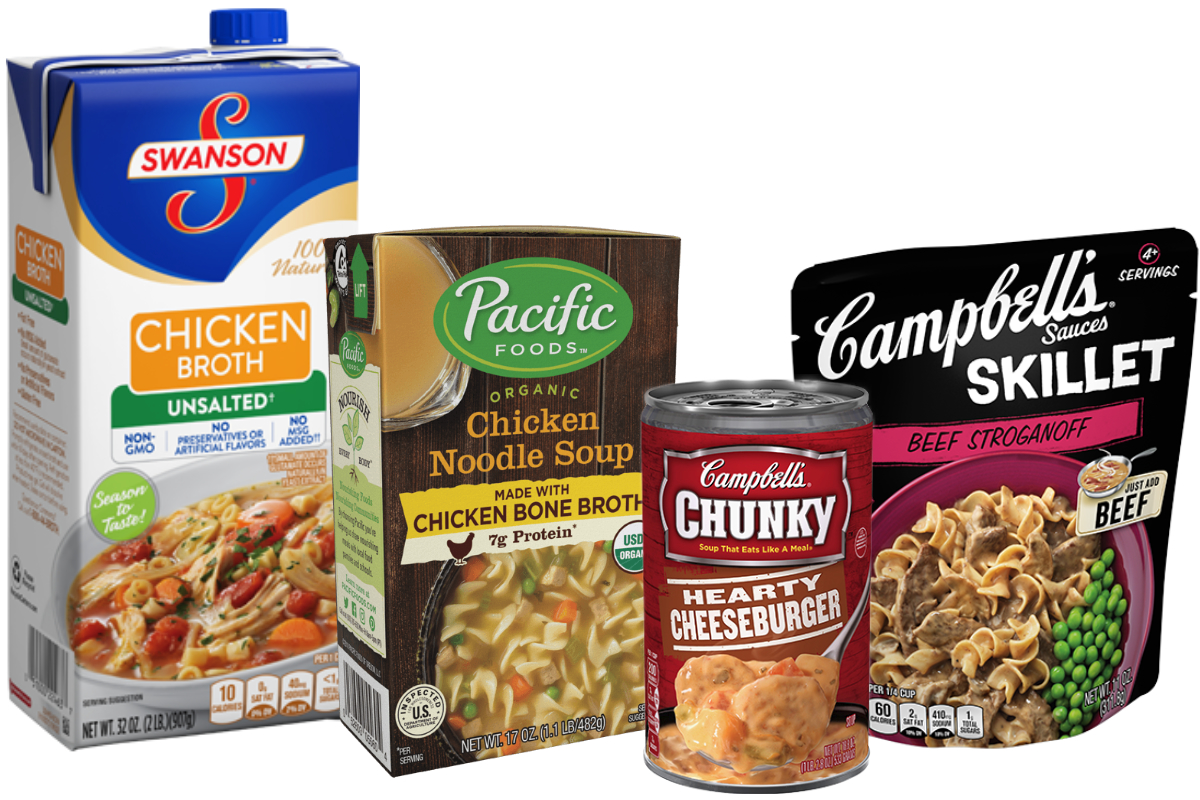 “To maximize margins and cash flow with Campbell’s, Swanson and Chunky brands, we are increasing and optimizing marketing to drive purchase intent, focusing our messaging on convenient, affordable, delicious meal solutions and utilizing price-pack architecture to differentiate and sustain margins,” he said.

General Mills had better results with its Progresso brand. Progresso Traditional was up 4% in sales to $254.7 million, and Progresso Vegetable Classics was up 9% to $127 million.

“Soup is a great business, and Campbell’s is an iconic brand,” Mr. McLoughlin said. “The business has been over relied upon to generate earnings and has been underinvested in. In recent years, we have pushed the business too hard on pricing and margin, and we did not do enough to keep our soup products and brands relevant with consumers. In fiscal 2019, we will release soup and strengthen our value proposition in the marketplace.” 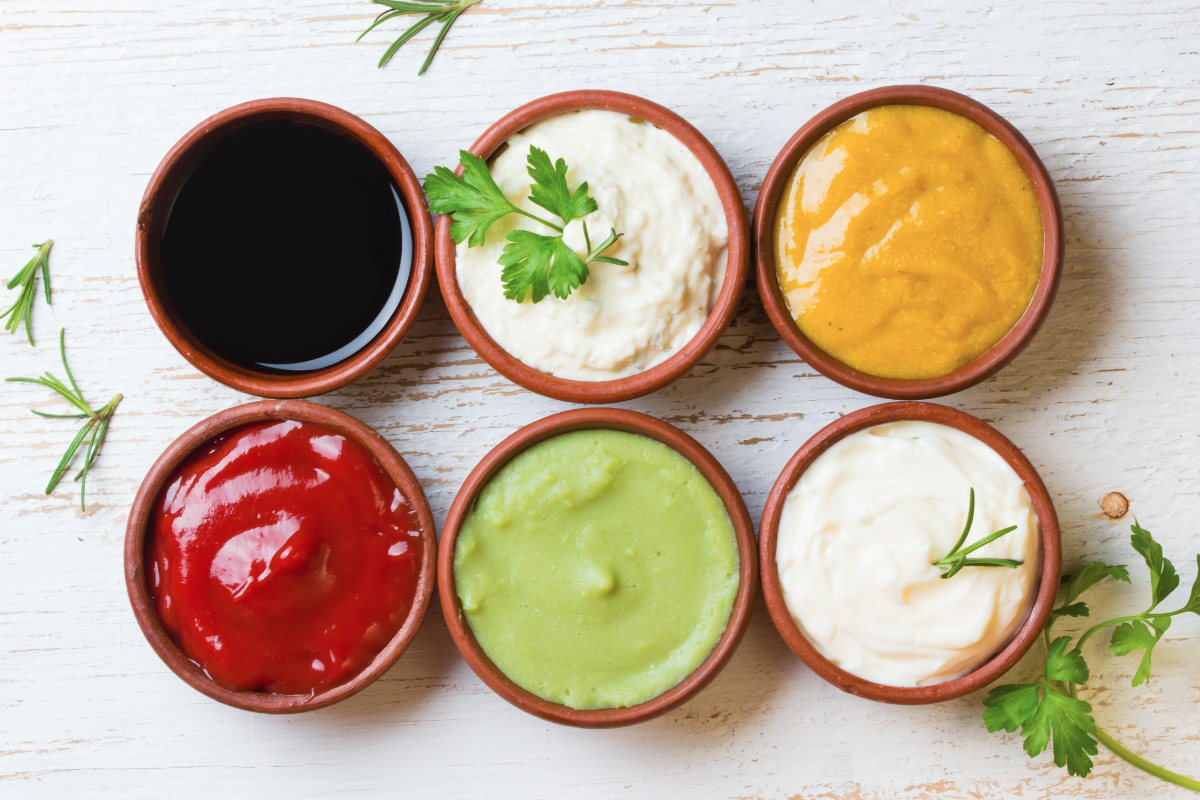 Creative ideas in condiments flourished in 2018.

“It is made with real sugar, garlic, red chilies and the original Huy Fong sriracha sauce, giving it the perfect spicy kick to our premium Red Gold tomato ketchup,” said Colt Reichart, a Red Gold owner.

Hugo Uys, a South African chef now living in New York, developed a range of Chut Up condiments, which include beet ketchup, apple and caramelized onion chutney, and peri peri hot sauce. The products are flavored with South African spices and sweetened with monk fruit and erythritol.

The market for condiment and cooking sauces reached $24 billion in sales in 2016, according to a report by market research firm Packaged Facts. Annual retail sales have grown at a rate of about 2%. Packaged Facts anticipates comparable growth through 2021.

“Sauces are increasingly being marketed as organic and healthy, with new options such as low-sodium or low-sugar varieties supporting restrictive diets,” said David Sprinkle, research director at Packaged Facts. “Marketing products as certified organic or carrying ‘free-from’ labels has become part of several trends that will help keep sauces and condiments popular with a range of influential consumers.”