LOUISVILLE, KY. — Red may be the color of the KFC brand, but RED also stands for something else at the fried chicken chain: Relevant, easy and distinctive.

That is the strategy that KFC, a division of Yum! Brands, Inc., is utilizing to strengthen the brand and drive restaurant development.

“Relevant means offering products in different flavors, formats on occasions for consumers everywhere as well as being relevant in local culture,” Tony Lowings, chief executive officer of KFC, said during a Dec. 5 investor day conference call with analysts. “Now the great news is at the core of KFC is fried chicken, and when I joined KFC in 1994, I had a bunch of people say to me, ‘I reckon it’s about 5 or 10 years before fried chicken is going to be dead.’ And how wrong could they be.”

Relevance also plays out in news and innovation, which helps drive sales. Mr. Lowings said KFC thrives in this area, noting that the restaurant chain plans to launch more than 50 premium-priced limited-time offerings around the world in 2019.

Value also is important in staying relevant, as is staying in tune with trends and issues of importance to consumers.

“Around the world, customers want more than just products and value,” he said. “They expect something from big brands. And, in developed countries, and particularly these days in emerging countries, people want to be associated with brands that are responsible and do the right thing. And we want to be seen as a fast, good company, not just a fast-food company. And where we have a head start is we’re actually born good. The Colonel was a real person who cooked real food in a real kitchen with real ingredients, and we were finger lickin’ good from the beginning with an emphasis on good.” 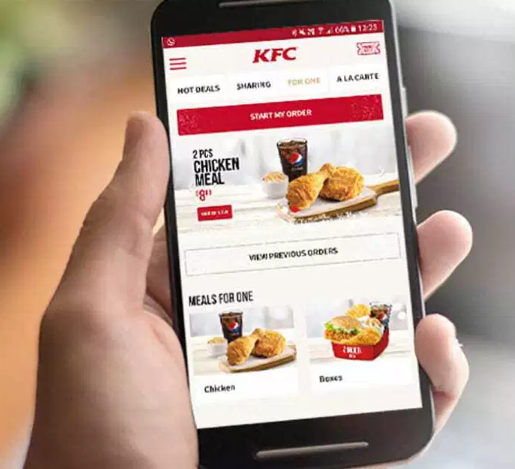 The “easy” part of the RED equation revolves around giving consumers every opportunity to access the KFC brand, Mr. Lowings said. He said KFC wants to become an omni-channel global powerhouse by dominating three channels: out-of-store, home delivery and click-and-collect.

“If you think through to the next two years from now, as far as kiosks are concerned, we will have more kiosks in our global KFC restaurants than Bank of America has ATMs,” he explained. “In terms of click-and-collect, we will have more outlets having click-and-collect than the entire portfolio of Walmart, Kroger, Costco and Target put together, and then in terms of delivery, we have a nice little bit of sibling rivalry with our Pizza Hut partners, but whichever way it goes, the end result is a great result for our Yum! consumers. So we feel very proud of that and feel that’s quite an impressive statistic.”

The final component of RED is being “distinctive.” Mr. Lowings said KFC has an advantage in this regard thanks to the company’s history built on a real person: Colonel Harland Sanders. But he acknowledged that the company hasn’t always done a good enough job in terms of making sure KFC’s iconic assets have been utilized as best they can.

“So over the last 12 months, we’ve done a lot of work in terms of sharpening our brand position and how we present ourselves to consumers, and we’re in the process of rolling this out through various touch points across all of our restaurants around the world from signage, to packaging, to uniform and particularly in our advertising,” he said.