Sweetening with dates comes to the states

LOS ANGELES — Brian Finkel moved to Israel in 2013 and began enjoying silan, a date syrup that serves as a sweetener.

“You walk into a supermarket anywhere in the Middle East, and you see 10 or 15 brands of this stuff,” he said.

Dates have been part of Middle Eastern cuisine since biblical times. Mr. Finkel said he wondered why the date-based product had not become popular in North America. It fits into several trends, including vegan, paleo-friendly and low-glycemic.

His next steps led to the creation of D’vash date nectar now found in thousands of U.S. stores, including Whole Foods Market, Sprouts Farmers Market, Wegmans and Jewel-Osco.

To commercialize the sweetener in America, Mr. Finkel first contacted David Czinn, a friend since the two met while visiting Israel 15 years ago. While Mr. Finkel has worked in finance and consulting, Mr. Czinn has more experience in food. He co-founded Fruigees, an organic fruit snack in a squeeze pack. Mr. Czinn lives in California and contacted growers in the state about sourcing organic dates.

The two friends founded Los Angeles-based D’vash Organics with Mr. Finkel serving as chief executive officer and Mr. Czinn as president. D’vash products began entering retail stores in July 2017. They should be in about 4,000 locations by the end of 2018, Mr. Finkel said. D’vash items also are sold on the company’s web site and through Amazon.

The company promotes D’vash as an alternative to honey and sugar. The sweetener may be used in various ways: as a marinade, as a base for salad dressing, as a sweetener for hot drinks like tea or coffee, and on baked foods like waffles and pancakes.

Date nectar is 32.4% glucose and 28.5% fructose, and it also contains potassium and antioxidants, according to D’vash Organics. D’vash is 2.7 calories per gram, which compares to sugar/sucrose at 4 calories per gram. D’vash has 54 calories in a 20-gram serving size and has 25% less sugar than honey, according to D’vash Organics. The glycemic index for D’vash is in the middle 40s, which compares to pure glucose at 100. Higher glycemic index values are given to foods that cause a more rapid rise in blood sugar.

D’vash also has a different texture than sugar or honey.

“I would say the texture is not quite as runny as maple syrup,” Mr. Finkel said. “It’s thicker than maple syrup, but it’s not as thick as honey.” 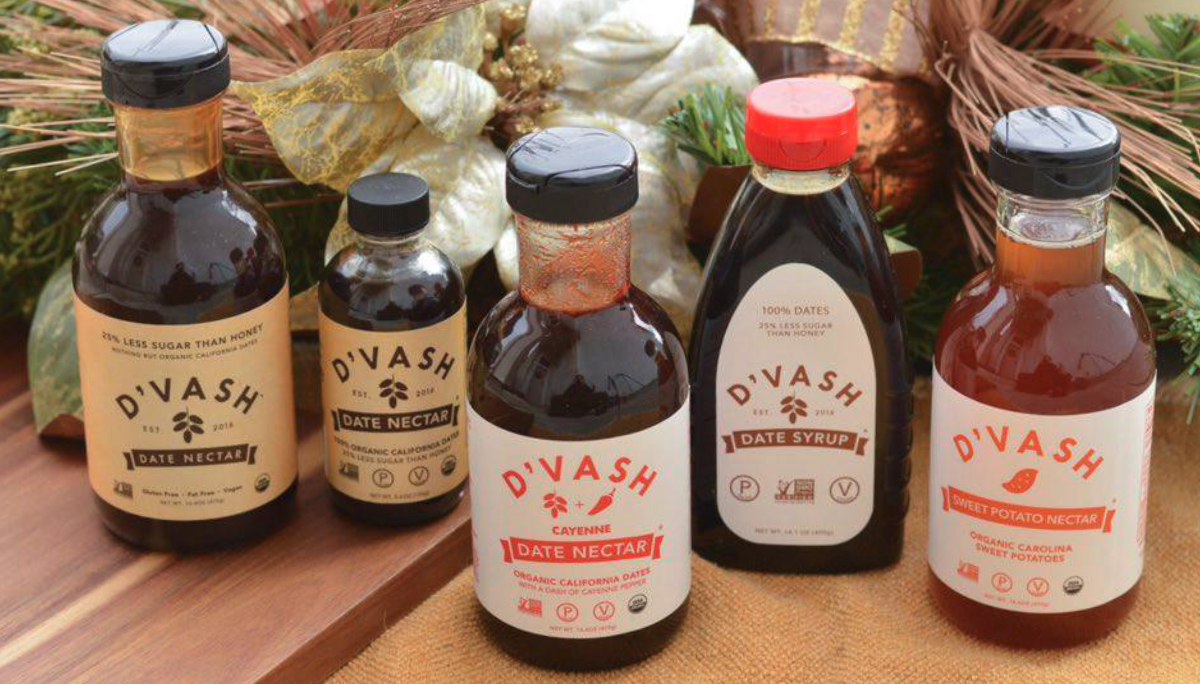 D’vash is the Hebrew name for honey. Mr. Finkel said the term “land of milk and honey” found in scriptures might refer to date syrup, the main sweetener used in biblical times, instead of honey.

“This is an American product, made in America, intended for the American audience in every single way, but it is very much inspired by the history of the Middle East,” he said.