We use cookies to provide you with a better experience. By continuing to browse the site you are agreeing to our use of cookies in accordance with our Cookie Policy.
Skip To Content
Home » F.D.A. points to improved stewardship of antimicrobials for animals

F.D.A. points to improved stewardship of antimicrobials for animals

WASHINGTON — The Food and Drug Administration on Dec. 18 issued a report that pointed to progress in efforts to limit the use of antimicrobials in food-producing animals to medically treating livestock and poultry under veterinary oversight while eliminating production uses of these drugs, such as promoting animal growth and enhancing feed efficiency.

Scott Gottlieb, M.D., F.D.A. commissioner, said in releasing the report, titled “2017 Summary Report on Antimicrobials Sold or Distributed for use in Food-Producing Animals,” that 2 million Americans are sickened each year by serious infections caused by antimicrobial-resistant pathogens, and at least 23,000 of these individuals die as a direct result.

“Optimizing how medically important antimicrobial drugs are used and limiting their use to only when necessary to treat, control or prevent disease will help to preserve the effectiveness of these drugs for fighting disease in both humans and animals,” Dr. Gottlieb said. “While it’s impossible to completely outrace antimicrobial resistance, we can take important steps now to slow its pace and reduce its impact on both human and animal health.”

Dr. Gottlieb said the report highlights a 33% decline between 2016 and 2017 in domestic sales and distribution of all medically important antimicrobials intended for use in food-producing animals. The report also showed a decline of 41% since 2015, the peak year of sales/distribution since the F.D.A. began issuing the annual reports on this subject, and a decline of 28% since the first sales report that summarized the sales/distribution data for 2009. Additionally, tetracyclines, which represent the largest volume of those domestic sales (3,535,701 kgs in 2017), decreased by 40% from 2016 through 2017. 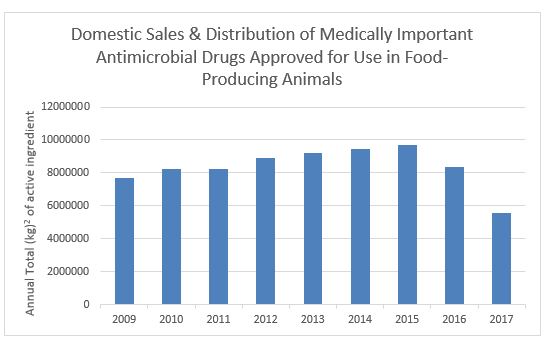 “These reductions are an indication that our ongoing efforts to support antimicrobial stewardship are having a significant impact,” Dr. Gottlieb said.

“It’s important to note that this year’s report is the first to include sales/distribution data submitted after all medically important antimicrobial drugs administered to food-producing animals in their feed or water were no longer allowed to be used for growth promotion and could only be obtained through a veterinarian’s order,” Dr. Gottlieb said. “This sea change was a direct result of the roadmap that the F.D.A. provided to animal drug sponsors in Guidance for Industry (G.F.I.) #213, New Animal Drugs and New Animal Drug Combination Products Administered in or on Medicated Feed or Drinking Water of Food-Producing Animals: Recommendations for Drug Sponsors for Voluntarily Aligning Product Use Conditions with G.F.I. #209.

“This guidance included recommendations for industry on how to eliminate production uses (e.g., growth promotion, feed efficiency) of medically important antimicrobials in the feed and drinking water of food-producing animals. The guidance also explained the importance of bringing the remaining therapeutic uses of these drugs under veterinary oversight.”

The report also contained additional information relating to the 2017 domestic sales and distribution of microbials approved for use in food producing animals. 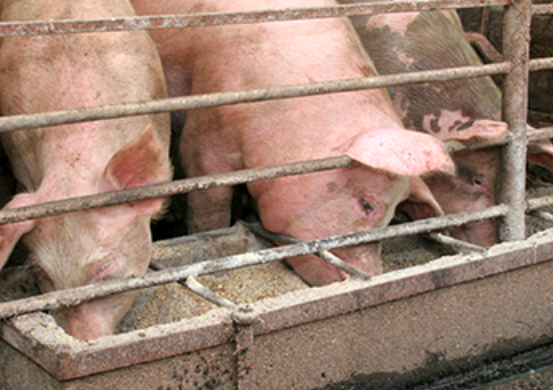 Tetracyclines accounted for 64% of such microbials, penicillins for 12%, macrolides for 8%, sulfas for 5%, aminoglycosides for 5%, lincosamides   for 3%, and cephalosporins and fluoroquinolones each for less than 1%.

“The sales trends reflected by the 2017 report are very encouraging, and I’m pleased to see that the sales and distribution of these antimicrobial drugs has declined significantly the past two years,” Dr. Gottlieb said. “Although the 2017 sales/distribution data being made available today can’t be used to forecast numbers for the upcoming year, we hope that this downward trend will continue. While I’m very pleased with the results of the report, and the efforts by all of our stakeholders thus far to improve antimicrobial stewardship, our work isn’t yet done when it comes to fighting antimicrobial resistance.”