We use cookies to provide you with a better experience. By continuing to browse the site you are agreeing to our use of cookies in accordance with our Cookie Policy.
Home » Uncertainty dominant market theme in new year

WASHINGTON — Some major issues were wrapped up late in 2018, including the signing of a new farm bill and the issuing of bioengineered labeling rules by the U.S. Department of Agriculture. The new year begins with at least some level of hope as trade talks with China appear to be progressing, although the markets still are functioning under much uncertainty, none more so than soybeans.

While U.S. President Donald Trump and Chinese President Xi Jinping at a Dec. 1 meeting agreed to put a 90-day hold on escalating the trade war, a 25% tariff on U.S. soybean exports to China remains in effect. Export sales of U.S. soybeans to China slowed dramatically in 2018 with no export shipments reported in November. New sales resumed in December after the Trump-Jinping moratorium, but they fell far short of what was needed to make up for the year’s lost business. China had committed to buy 3.7 million tonnes of U.S. soybeans as of Dec. 20 for delivery in the 2018-19 marketing year that began Sept. 1 compared with 24 million tonnes a year earlier.

Despite the loss of its largest export market, U.S. soybean futures only declined about 7% in 2018. And speculators appeared more hopeful going into 2019 than they did a year ago for soybeans and grain futures. At the start of 2018, commodity funds held a net short position of 390,201 lots combined for the CME Group soy complex, corn and wheat futures and options, according to Commodity Futures Trading Commission data. At the start of 2019, the trade estimated a net long of 688 lots across the five commodities, according to a report on Reuters. A net short (selling) indicates a bearish outlook while a net long (buying) suggests more bullish expectations.

The partial government shutdown has complicated matters and added a wrinkle to market uncertainty. Lacking is current data from the C.F.T.C. on the aforementioned speculative activity. The most recent Commitments of Traders report was as of Dec. 18. First-of-year estimates noted above were from the trade. 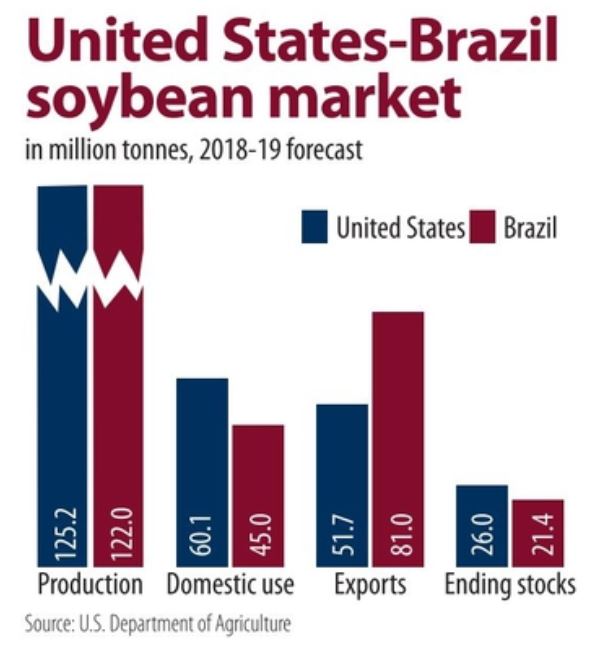 The U.S.D.A. has continued to publish its weekly Grains Inspected and/or Weighed for Export report, which shows actual shipments versus total sales commitments (shipments and undelivered sales on the books). As of Dec. 27, marketing-year-to-date soybean exports totaled 16,514,016 tonnes, down 42% from the same period last year (Sept. 1 to Dec. 28, 2017). In comparison, corn inspected for export for the marketing year (beginning Sept. 1) totaled 17,904,084 tonnes, up 69% from the prior year, and wheat totaled 12,671,336 tonnes, down 13% for the marketing year that began June 1.

Soybean and wheat futures have garnered modest support from ideas that 2019 plantings may decline from 2018, which would help shrink heavy stocks of U.S. soybeans and wheat, with the latter struggling to compete against lower-priced Black Sea region wheat (especially from top exporter Russia) in the world export market. At the same time, declining output of corn-based ethanol, which uses about 38% of U.S. corn production, may add a negative tone to the corn market, which saw higher futures prices in 2018 for the first time in six years and was the most bullish of the three major commodities. Adding further support were forecasts that the U.S.D.A., in its annual Crop Production report, may trim 2018 U.S. corn and soybean production, thus lowering Dec. 1 stocks estimates, assuming the government shutdown ends in time for the reports to be released as scheduled on Jan. 11.

Going forward, much depends on progress of the U.S.-China trade talks during the 90-day window. Even if the trade war ends, there is the lingering question of how much long-term damage has been done to the U.S. soybean market. Many in the trade believe at least some percentage of potential exports have been permanently lost to Brazil, where farmers have boosted production to take advantage of the trade rift. That will only be known over the months ahead.