We use cookies to provide you with a better experience. By continuing to browse the site you are agreeing to our use of cookies in accordance with our Cookie Policy.
Home » Slideshow: Ghee is gold in the butter-is-back trend

Slideshow: Ghee is gold in the butter-is-back trend

CHICAGO — Consumers in the United States ate a pound more of butter in 2017 than a decade earlier. Per capita consumption was 5.7 lbs in 2017, according to the U.S. Department of Agriculture, and that figure is expected to increase over the next few years.

What is the attraction to eating more fat? Research shows butter is not the enemy. Simple carbohydrates, namely refined sugar, have been linked with obesity and diabetes. Further, unlike man-made margarine and shortening, butter is perceived as natural and clean label. And with products such as ghee, there’s an association with ancient Ayurvedic holistic healing practices, which now has evolved into alternative medicine for health and wellness. Ghee is recognized as having anti-inflammatory and digestion-aiding properties, among other benefits, and has become a fixture of some low-carbohydrate, high-fat diets, namely keto and paleo.

Ghee, also known as ghrita, is a type of clarified butter. It originated in India and now is commonly used in Middle Eastern and Asian cuisines. Ghee is made from cow or buffalo milk butter. The butter goes through a heating process that removes the milk solids (dairy proteins and lactose). While the paleo diet is non-dairy, the absence of milk solids makes it an acceptable paleo food.

Commercial butter is about 80% fat, 15% water and 5% milk solids. Clarified butter is made by heating butter to the point where water evaporates and the milk solids separate from the fat and are removed.

In the production of ghee, the milk solids are cooked long enough to caramelize, imparting a nutty flavor to the final product. The solids are then removed. While still in liquid form, flavors and salts may be added for an extra culinary experience. 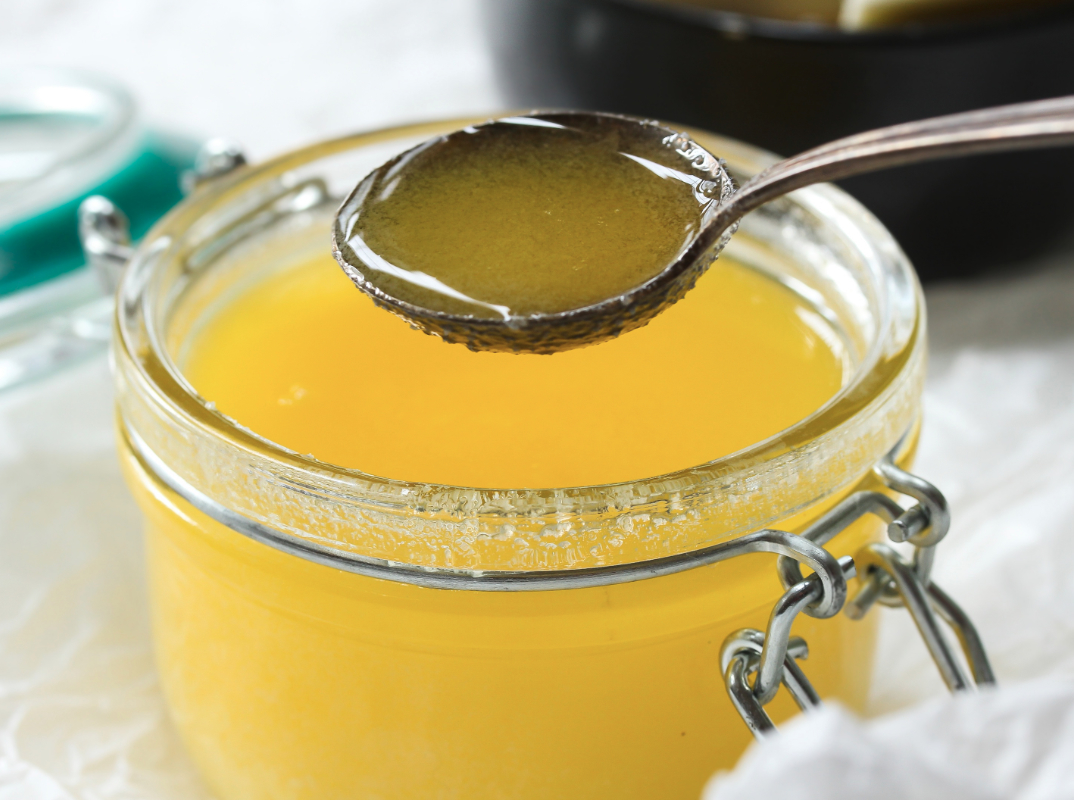 Because the milk solids are the most heat-sensitive component of butter, by removing them, the smoke point increases. This is the highest temperature that one may safely heat a fat or oil before it starts to oxidize and burn. The smoke point of commercial butter is 350 degrees F, while with ghee, the smoke point rises to as high as 450 degrees F, making it ideal for slow-cooking methods, such as sautéing and searing.

Ghee is lactose free and non-perishable. Its texture resembles coconut oil. Many new ghee products entering the market are produced from grass-fed butter, which is perceived as being loaded with fat-soluble vitamins and being a better source of health-promoting saturated and polyunsaturated fats (short-, medium- and long-chain) compared to traditional butter. This includes conjugated linoleic acid (C.L.A.), a fatty acid associated with burning body fat and improving heart health. This complements the medium chain triglycerides (M.C.T.) inherently concentrated in milkfat as well as coconut oil. The M.C.T.s are recognized for breaking down fat in the body. The clarifying process also concentrates the butyric acid in milkfat. Butyric acid is known for its positive effects on immune function and inflammation.

In the past year there’s been a proliferation of original and flavored ghee options in jars. Recently, a next-generation of hybrid products started entering the marketplace.

Los Angeles-based Fourth & Heart is introducing hybrid Ghee M.C.T. pour oils and sprays in garlic, original and truffle flavors. These medium heat oils and sprays have a 385 degrees F smoking point. They are a blend of ghee, coconut oil M.C.T.s, and avocado oils with omega fatty acids, vitamins A, D, E and K, as well as butyric acid. The oils come in 8.5-oz pours and 5-oz spray bottles.