We use cookies to provide you with a better experience. By continuing to browse the site you are agreeing to our use of cookies in accordance with our Cookie Policy.
Home » The buzz around biltong

The buzz around biltong

KANSAS CITY — Biltong isn’t jerky. Still, the meat snack that hails from South Africa gets lumped into the jerky and sticks categories. However, the production process – and the resulting flavor and texture – differentiates biltong from other meat snacks.

Biltong originated from the South African tradition of air-drying meat. Beef is marinated in traditional ingredients including salt, pepper, ground coriander and vinegar, which add flavor and act as curing agents. The meat is then air-dried and may be sliced into strips or formed into sticks called droëwors.

Jerky also is flavored and cured using marinades or spice rubs. However, the meat is then cooked using a dehydrator or smoke at a low temperature. Biltong is never cooked.

A growing number of snack makers in the United States are adding biltong to their product lines or focusing exclusively on biltong production. Most report robust growth through e-commerce sales and partnerships with brick-and-mortar retailers. Headwinds facing producers include educating U.S. consumers about what biltong is (and isn’t) while differentiating biltong from traditional jerky and sticks. But overall growth in sales of meat snacks has encouraged biltong makers to forge ahead and grow their niche. 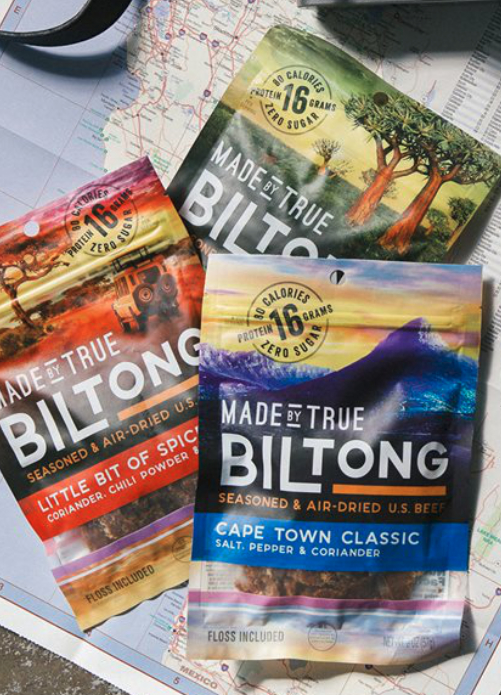 Among the players in the category are Jess Thomas, Kevin Hix and James Evans, who co-founded Made by True snack company in 2015. The trio traveled to South Africa to learn about biltong from the locals.

“When we were starting [Made by True], the writing was on the wall that this was going to be a hot space," said Mr. Thomas, chief executive officer of the company.

Snacking is assuming a more critical role in American food culture. Meat snacks are catching up on mainstay items such as potato chips and popcorn as consumers seek out flavor adventures and indulgence at an affordable price point.

"American households spend an average of $25.81 per year on meat snacks,” said consumer and market research firm Nielsen in its 'Where’s the Beef? Check the Snack Aisle' report. “Their per-trip spend on sticks and jerky is also about twice as much as it is on popular staples like potato chips and popcorn ($7.42 vs. $3.61 and $4.01, respectively).”

Additionally, the meat snack category posted compound annual sales growth of more than 7% over the past four years, with sales growth of 3.5% for the year ended Feb. 25, 2017, Nielsen said.

Asian-American households lead in spending each year on meat snacks at $31.61 on average, according to Nielsen, and they’re 22% more likely to buy meat snacks than the average shopper. Across generations, baby boomers spend the most at $28.48 per year.

“This year is all about biltong,” Mr. Thomas said. “We are investing heavily in producing, promoting and educating American consumers about the pure awesomeness of authentic South African-style biltong.”

“Consumers are looking for a healthier snack with a lot of protein,” said Wian van Blommestein, co-founder of meat snack company Ayoba-Yo. “That’s really what’s setting us apart. It’s more tender and easier to chew; it’s an improvement and a new, tastier way to eat protein.” 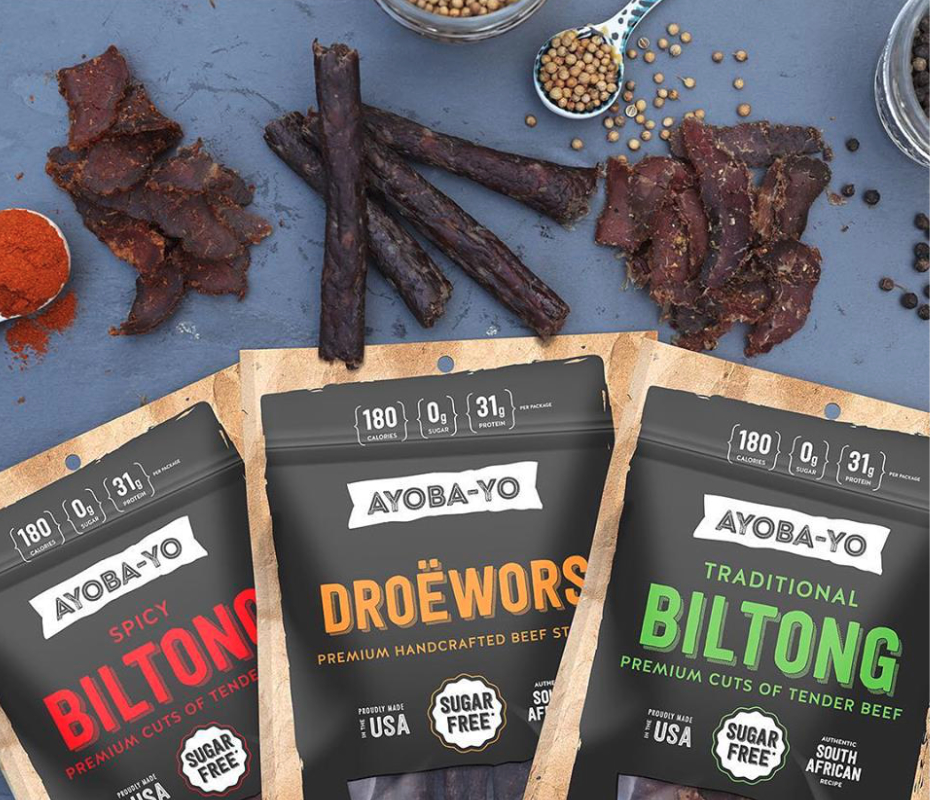 Health claims are among the leading drivers of growth in the overall salty snacks segment, according to Nielsen. Non-G.M.O. claims lead the pack with an 18.2% surge in dollar sales for each of the past five years, followed by claims of free from artificial colors/flavors at 16.2% and no/reduced sugar claims climbing 11.3%, Nielsen said in its report “Individual Snacking Categories on the Rise in the U.S.”

Add to that research by The NPD Group, which found that more than three-fourths of consumers agree that protein contributes to a healthy diet.

Certifications from popular weight management programs such as Keto, Whole30, Weight Watchers and others, also have helped meat snack makers reach more consumers. Biltong especially is ideal for consumers on the Keto diet because it is sugar free and high in protein. Ayoba-Yo has received Keto and Paleo certifications.

“We are the first and only Paleo and Keto certified biltong,” Mr. van Blommestein said. “It really lends an extra layer of transparency for our customers, which is very important to us.”

The beef used to make Made by True’s biltong is born and raised in the U.S. and sourced regionally.

“That’s been our commitment since Day 1 – having source transparency, reducing food miles and supporting American farmers and ranchers is more important to us than having an organic or grass-fed label,” Mr. Thomas said. “Especially if getting that label means sacrificing those things (which in our industry, it almost necessarily does, unfortunately). From an ingredients standpoint, biltong qualifies as Paleo, Whole30 and Keto-friendly, and we are working this year to get the necessary certifications.”

“There is no heat; you don’t cook the product at all,” he said. “So, from a food safety perspective it’s not the easiest thing in the world to produce. They’ve been doing it for hundreds of years in South Africa, and they’ve figured it out. But unless you have experience making it at scale in South Africa, or maybe England, you wouldn’t know how to open a biltong facility.” 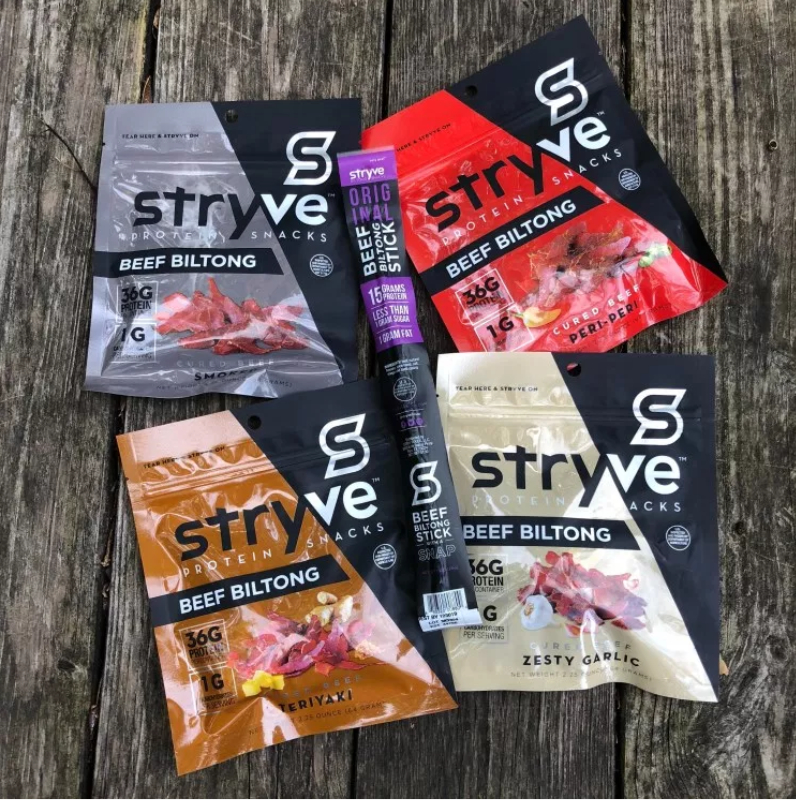 Stryve Biltong took on the challenge of opening a biltong production facility in 2018 when it opened a 52,000-square-foot plant in Madill, Okla. Stryve purchased the plant after securing $10 million during a funding round led by Meaningful Partners and Murano Group. Purchasing the facility served to fulfill rapidly growing orders for the company’s products and to achieve higher standards of certification, Stryve said.

“The size and scope of the new facility is a direct response to our rapid growth as a brand and the need to increase production capacity,” said Gabe Carimi, co-founder and c.e.o. of Stryve Biltong.

Earlier in 2018, Stryve acquired biltong makers Braaitime L.L.C. and Biltong USA, making the company the sole owner of all U.S.D.A.-inspected biltong facilities in the U.S. The Biltong USA plant is located in Stallings, N.C.

Kalahari Biltong benefited from equity financing by AccelFoods, a New York venture fund, in 2017. The company put the capital infusion toward launching new flavors of Kalahari biltong in retail stores and expanding manufacturing and marketing support for the company’s products.

Sticks and strips are the predominant forms of biltong, while small bits of the tender meat may be mixed with nuts and dried fruits for high protein trail mixes.

The rise of biltong in the U.S. is dovetailing with consumer demand for flavor adventures that include tastes from Africa. A survey of chefs who are members of the American Culinary Federation identified African flavors as a trend.

Additionally, a study by Mintel found that 32% of consumers are interested in seeing more African seasonings in their food, Mr. van Blommestein said. That consumer interest will play an important role in the growth of biltong market share in the meat snack category, he said. 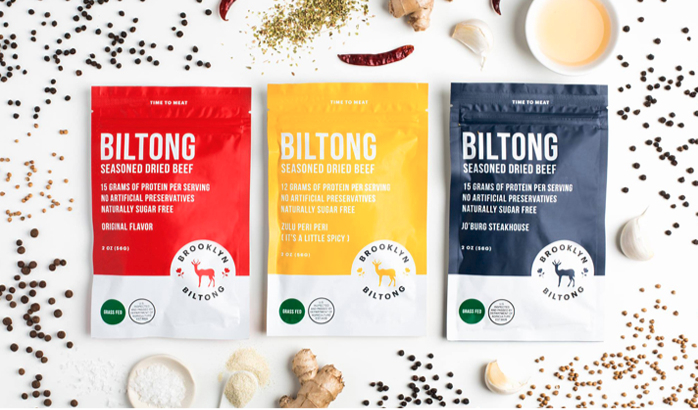 However, the same air-drying process that gives biltong its unique flavor and texture limits the species of animal proteins manufacturers can use. Chicken and turkey, for example, require a different drying process, Mr. van Blommestein said, whereas ostrich, deer and beef traditionally are the proteins of choice in biltong recipes.

Made by True continues to develop different forms and formats of biltong that draw on traditional South African styles and formats. The company believes the product is still new to U.S. consumers, which highlights the need to establish baseline knowledge about the product.

“Otherwise, you risk creating product confusion in the market simply by trying to be ‘differentiated’," Mr. Thomas said. "But the innovation curve is so fast these days, we wouldn’t be surprised to see a variety of new biltong introductions beyond the authentic and traditional style. You may see some experimentation with different proteins, blends and flavor profiles, but probably not from us.”