CHICAGO — Everything old is new again. This maxim is a measurable consumer trend as food choices return to the basics in the baked goods market. And old is not just new. Ancient has been given a new lease on life.

Ancient grains have been feeding man since the beginning of civilization but were largely ignored by Western countries where selectively bred and refined grains provide an economic advantage. That’s changing.

Flowers Foods, for example, is rolling out an ancient grain bun to the food service sector. Made with amaranth, buckwheat, khorasan, millet and spelt, one bun contains 7 grams of protein and 3 grams of fiber.

It’s been about 50 years since commercially produced whole wheat bread appeared on retailers’ shelves. While many children at first dissed the brown-bread lunchbox sandwich, health-conscious moms and dads insisted, and today those children have kids of their own and want better breads and baked goods for their offspring.

It’s no wonder whole grain baked goods have gained significant traction since going mainstream at the turn of the century. Today’s shoppers gravitate toward packages making “made with whole grain” claims, and ancient grains are now part of the momentum.

While there is no oﬃcial deﬁnition of what qualifies as an ancient grain, the Whole Grains Council describes them as ones that have been largely unchanged since the beginning of time. This definition suggests modern varieties of corn, rice and wheat, which are products of years of selective breeding, are not ancient grains. 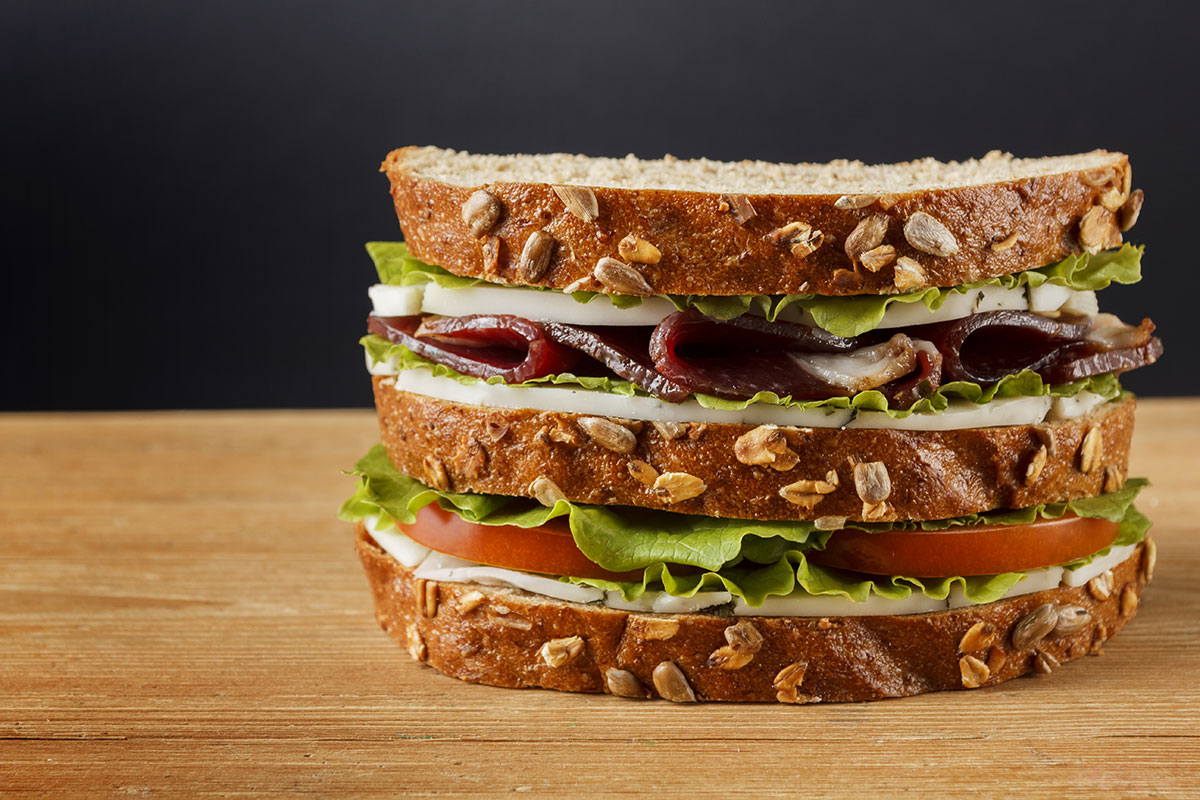 “Ancient grains cover a wide array of cereals and pseudo cereals,” said Colleen Zammer, senior director of marketing and product development for Bay State Milling Co. “There are ancient wheats like spelt, einkorn and emmer that some call ancient and others call heirloom grains. Barley and rye sometimes fall into this category as well. These grains all contain gluten and therefore provide the structural benefits of gluten that traditional baked goods require but vary in terms of flavors, colors and even texture due to the different ratios of glutenin and gliadin.”

Other ancient grains that don’t contain gluten, such as amaranth, quinoa, millet and sorghum, function well in applications such as crackers, flatbreads and extruded snacks, she explained. They also offer a range of flavors and textures that provide consumers with some excitement beyond the rice and corn typically found in gluten-free foods. They can be used as the base ingredients in flour form or inclusions and toppings in the whole grain form.

Like other whole grains, the kernel of ancient grains contains three nutrient-dense components — the bran, germ and endosperm. These grains can be ground into whole grain flour. Reﬁning removes the bran and the germ, leaving only the endosperm. Without the bran and germ, about one-fourth of the protein is lost, as are many important nutrients including fiber.

Bakers have a diverse toolbox of ancient grains, with each one contributing a unique appearance, flavor and texture. Navigating their use in traditional recipes may pose some challenges. Ms. Zammer suggested that before a baker starts formulating with ancient grains, the end consumer and application should be defined.

“Understanding if your target is gluten free will help to narrow the field of choices,” she said. “From there, what flavor and texture profile are you trying to achieve, and what nutritional benefits are you trying to offer? Having this information in advance will allow you to select the optimal ancient grain or blend.”

Incorporating these nutrient-dense grains used to be time consuming for bakers, as it often required specific reformulations to prevent the grains from stealing moisture, accelerating staling, impacting taste or reducing shelf life. 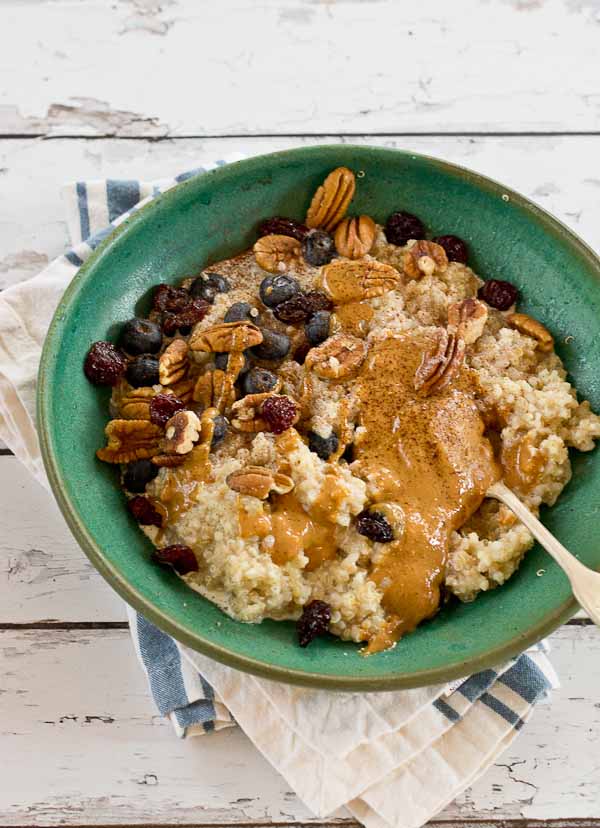 Most ancient grains are available individually as whole grain flours or in whole grain multigrain blends. They can also be milled to desired granulations or not milled at all. Pre-soaked and pre-cooked grains are a value-added option.

“We remind our customers that a variety of grains is important. We recommend trying many grains, combinations and formats — whole, flakes, crisps — to find that ‘sweet spot’ in terms of flavor, texture and visual appeal,” said Angela Ichwan, senior director of technical solutions for The Annex by Ardent Mills. “Whole sorghum flour, for example, works well in foods that are comparatively higher in moisture, but a high inclusion level of sorghum can impart grittiness, so it’s important to conduct a lot of trial-and-error to achieve the best ratios for each grain and each finished product.”

Many ancient grains’ small size allows them to be used in whole format for doughs or as a topping.

“They come in an array of shapes from round — millet, amaranth and quinoa — to triangular, such as buckwheat,” Ms. Zammer said. “They provide an extensive color palette, including shades of yellow from cream to canary as well as reds and browns, when considering quinoa and teff.”

In whatever format, the grains contribute an array of flavors to satisfy consumers from corn-like millet to peppery amaranth and earthy quinoa. Teff has a unique chocolate-like flavor that lends itself to sweet goods. Spelt has a mild flavor profile and does contain gluten. But spelt has a different ratio of proteins, which creates a more extensible dough, preferable for flatbreads and tortillas.

“Many of these grains provide nutty, earthy flavors that blend well with sweet ingredients such as nuts, dried fruits and natural sugars and syrups that are typically used in baked goods formulations,” said Don Trouba, senior director of go-to-market for The Annex by Ardent Mills. “Some ancient grains bring texture to a product, such as chewiness or pops of crispness.”

In flour format, some ancient grains may be direct substitutes for wheat. However, they may often require the addition of other ingredients in order to maintain desirable sensory appeal.

“Unlike traditional wheat flour, ancient grains can be challenging for bakers since they may require special enzymes to avoid low-volume production and can also impact product flavor, texture and mouthfeel,” Mr. McClellan said. “Bread made with ancient grains tends to stale quicker than conventional white bread. All these factors can lead to unfavorable eating experiences, so it’s important to get the process parameters correct.” 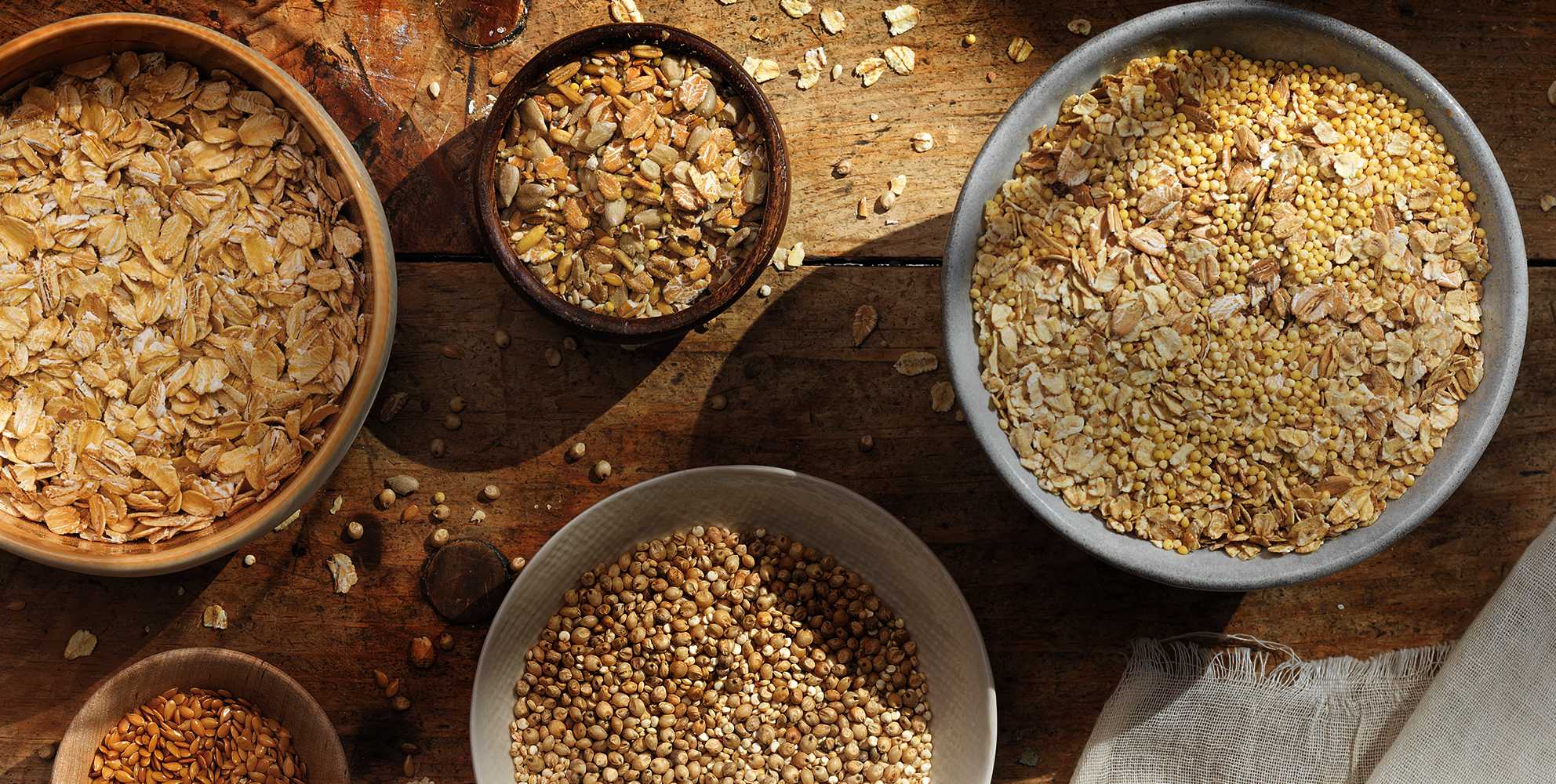 The Annex by Ardent Mills recommends bakers experiment with each grain or grain flour mixes to learn how each takes and holds water through baking. Moisture levels are crucial for the finished product, in terms of texture and shelf life. When introducing different flours and grains to dough formulations, it’s important to work with ingredient ratios to find how to maintain the flavors of whole grains without changing the dough structure too much.

“The fineness or coarseness of the grains also has an impact on every step of the baking process,” Mr. Trouba said. “Again, trial-and-error is required as each one performs differently. Adjusting water levels and choosing a coarser milling can avoid gumminess in the dough.”

Some general formulation considerations include increasing water 5 to 10% (baker’s per cent) in the formula and decreasing mix time by 20 to 30%, according to Ms. Ichwan.

“Most whole grains processed with the germ have a short shelf life, generally under six months,” added Nicole Rees, product director for AB Mauri North America. “This isn’t difficult for bakers to accommodate if they are accustomed to working with whole wheat.”

Ancient grains play a role in the evolving food system in the U.S., but many consumers who are seeking new flavors and textures in their foods have yet to explore them. Bakers who incorporate these ingredients in their formulations have an opportunity to introduce them to this new world. 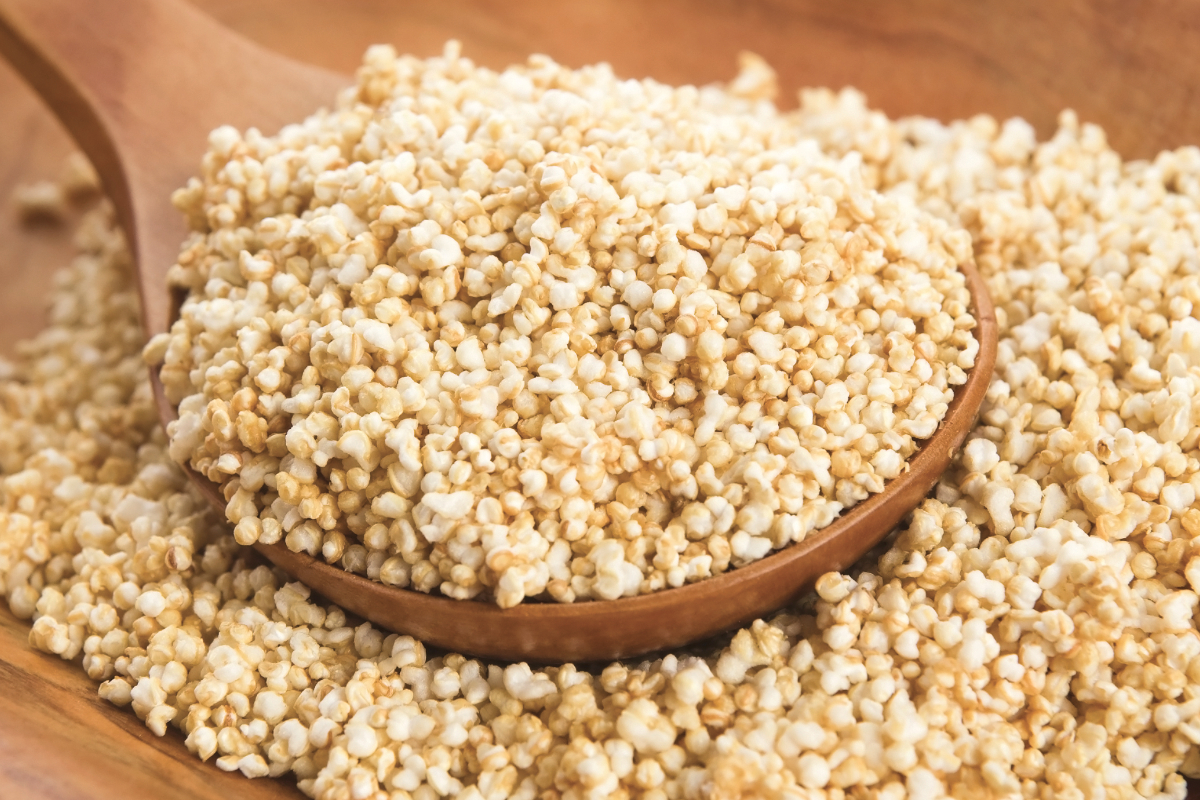 A story worth sharing

An appealing attribute of ancient grains is that many grow and thrive with lower levels of pesticides, fertilizers and irrigation. This makes them an attractive choice to consumers who choose to shop with their carbon footprint in mind.

Bakers can leverage farm-driven narratives that link to sustainability and wellness to highlight the quality distinctions of ancient grains. And while many ancient grains originate from varied regions from around the world, today most can be sourced domestically.

“They lend themselves to great stories of how they were brought to the U.S. and are cultivated in the same way as they were in ancient times,” said Colleen Zammer, senior director of marketing and product development for Bay State Milling. “Some are grown on smaller farms and are sourced and milled in smaller batches. This allows for ‘local’ claims, which resonate with consumers who like to know exactly where their food comes from.” 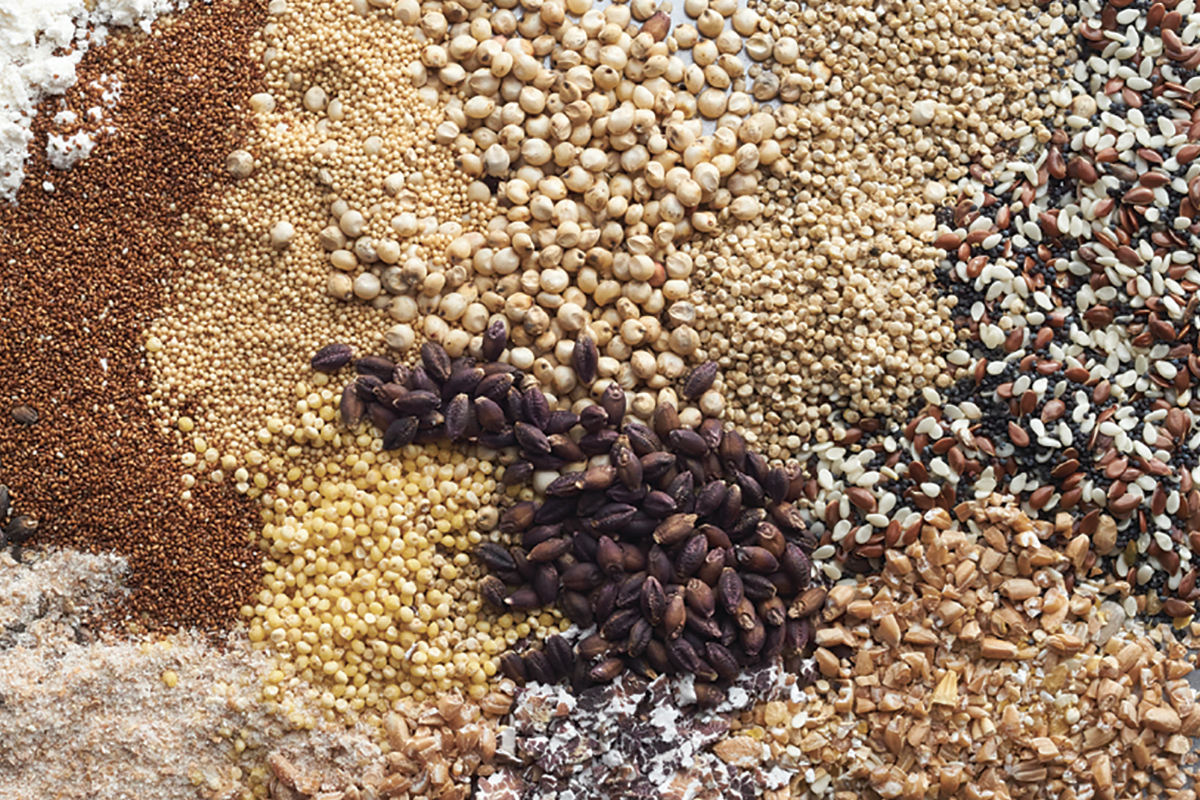 Pack in the nutrition

Today’s grain suppliers offer a plethora of whole ancient grains in varied formats. Their use in baked goods appeals to the growing number of health-and wellness-seeking shoppers.

Consumers see the consumption of alternative and ancient grains as a tactic for getting more fiber and naturally occurring protein in the diet, according to research firm The Hartman Group. The Hartman Group’s Health and Wellness 2017 report found that 63% of consumers say they’re seeking more fiber in their diet, 58% say the same about whole grains, and 32% say they are seeking plant-based proteins.

Barley and oats in particular are high in heart-healthy soluble fiber, while buckwheat has rutin, a unique antioxidant that supports cardiovascular health. Teff, a tiny grain from Africa, is high in iron and calcium.

“If the goal is working toward a balanced protein, amaranth and quinoa will be key as they are good sources of lysine, an essential amino acid that most grains have in short supply,” said Nicole Rees, product director for AB Mauri North America.

Bakers must remember that each ancient grain offers a unique nutritional composition. These benefits may often be claimed and help sell product.

“Ancient grains are also non-G.M.O. and many qualify for whole grain, fiber or gluten-free claims, depending on the finished application and forms used,” said Don Trouba, senior director of go-to-market for The Annex by Ardent Mills. “There is scientific evidence and approved health claims linking diets rich in fiber-containing grain products and the reduction in chronic diseases.”