Harnessing the power of alternative flour

CHICAGO — Don Guerra’s passion for baking and his commitment to community is showcased in the bread baked at Barrio Bread in Tucson, Ariz. Local-grown and milled grains are a pillar of his business. This includes the use of alternative flours sourced from some unexpected places.

The term alternative flour implies a foodstuff other than traditional milled cereal or seed that has been ground into a fine consistency.

“Alternative flours are gaining interest in the culinary world to offset negatives of traditional wheat flour, to improve the nutritional value of prepared foods and because of the interest of chefs and consumers to explore new textures, flavors and aromas,” said Anastasia Tkacheva, co-founder and chief technology officer of ingredient technology company Planetarians.

Bertha Jimenez, co-founder and chief executive officer of Rise Products Inc., added, “Consumers are drawn to alternative flours for their sustainability, as they can be sourced from insects, from crops that require less water, or from byproducts.”

The alternative flour category is in its infancy. Innovation is now possible due to advances in milling and sifting, which produce textures similar to wheat flour and much greater consistency than in the past, according to Katlin Smith, founder and c.e.o. of Simple Mills.

“We foresee continued diversification of flour derivatives, specifically in the areas of nuts, seeds and legumes,” she said. “As the alternative flour industry grows, the flours will become a lot more accessible, consistent and widespread. They will also be more sustainably produced and processed with cleaner technologies.”

From mesquite to acorns

One alternative flour that Mr. Guerra uses comes from Tucson-based La Madera Mesquite. The company mills whole pods obtained from the mesquite tree (Prosopis glandulosa), which is widespread in southern Arizona. The pods are considered a nuisance by landscapers but when they are dried and ground into a reddish flour, they are a key ingredient in many locally produced foods. 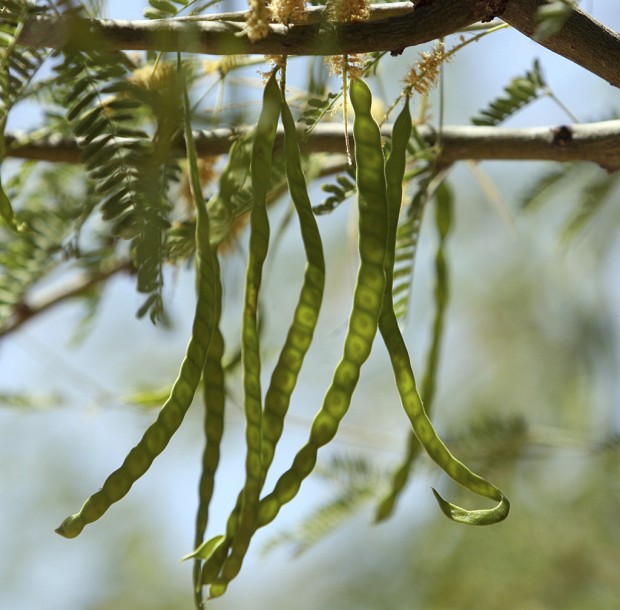 The fleshy part of the pod provides carbohydrates, including soluble and insoluble fibers, while the seeds are a concentrated source of protein, including the essential amino acid lysine, which is often limited in plant-based proteins. This makes mesquite flour a nutritional powerhouse, as it’s also loaded with calcium, iron, magnesium, potassium and zinc. The flour has a malty, nutty, smoky, sweet flavor profile often described as having hints of cocoa, maple, molasses and hazelnut.

Like protein powders, mesquite flour may also be added to smoothies and blended drinks. It has thickening properties and may be used as a flavorful and colorful alternative to cooking starches in authentic southwest sauces, soups and stews.

Like mesquite pods, acorns are another human annoyance. But not for everyone.

Sue Chin, owner of Sue´s Acorn Cafe & Mill in Martinez, Calif., for example, collects local acorns to produce her own flour. She uses it to create an array of baked goods served at her restaurant and sold online.

Acorns — the nuts with caps and shells removed — are high in protein, potassium, magnesium, calcium and vitamin B6. They are naturally gluten free and loaded with fiber. There are more than 400 species of oak trees grown around the world, and the acorns they produce vary in color, flavor and size.

On Kea Island in Greece, Marcie Mayer, a California native, leads the Oakmeal Acorn Initiative, which is a multifaceted project to help farmers rekindle the collection of acorn caps for exportation to tanneries, as well as establishing acorn flour-based products in the local cuisine. 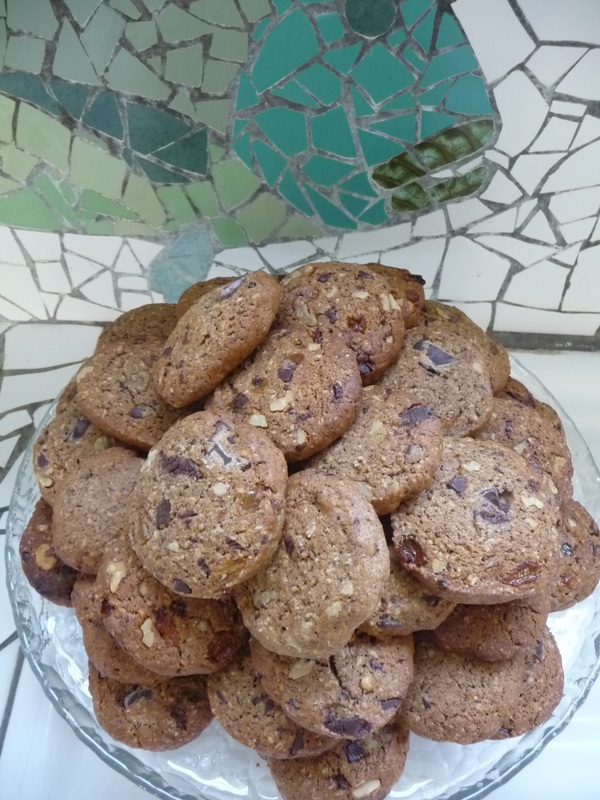 “Acorn flour is best combined with other flours, grains and oats,” Ms. Mayer said. “It is a hard flour and needs extra time to absorb other ingredients in a dough or batter. Acorn flour can be used instead of corn flour for thickening sauces, gravy, soups and stews. It has a darker color and much richer aroma.”

Other nuts as well as legumes may also be dried and ground into alternative flour. Chickpea flour, for example, is often used to increase the protein content of crackers and baked snacks.

“Chickpea flour has almost double the fat content of whole wheat flour and is about 25% higher in protein,” said Angela Ichwan, senior director and technical solutions for The Annex by Ardent Mills. “The flour tends to be denser and stickier than regular wheat flour and recipes need to be adjusted. It’s a good substitute for heavy flours such as rye or buckwheat in muffins and pancakes.”

Another use is in batters and breadings. It may improve the nutritional profile of tempura vegetables and chicken nuggets and allows for a gluten-free claim.

While supporting local is the foundation of Barrio Bread, Mr. Guerra is incorporating principles of a circular economy into his business. This is the basis of his use of spent grain.

Mr. Guerra works with local craft beer brewers such as Iron John’s Brewing Company in Tucson, to source their spent grain, which typically is discarded after brewing. He uses the spent grains with wheat flour to make a specialty loaf with a nutty, toasted flavor profile. The liquid is squeezed out of the spent grain before it’s folded into the dough.

“I reduce the added water, as about 30% of the liquid in the bread is now the wort in the spent grain,” Mr. Guerra said.

Spent grains used in this fashion often add some chewiness to the baked bread. This is likely due to the gelatinized starch in the wet grain.

A challenge in working with spent grain is it spoils quickly. Spent grain is a concentrated source of carbohydrates, proteins and water, an ideal environment for microbial growth unless the grains are refrigerated, frozen or further processed quickly. The latter includes drying and milling the spent grain into flour, which is being done by several brewers and secondary processors who support regenerative food systems. The result is a high-protein, high-fiber flour with a distinctive flavor profile that complements many baked goods. 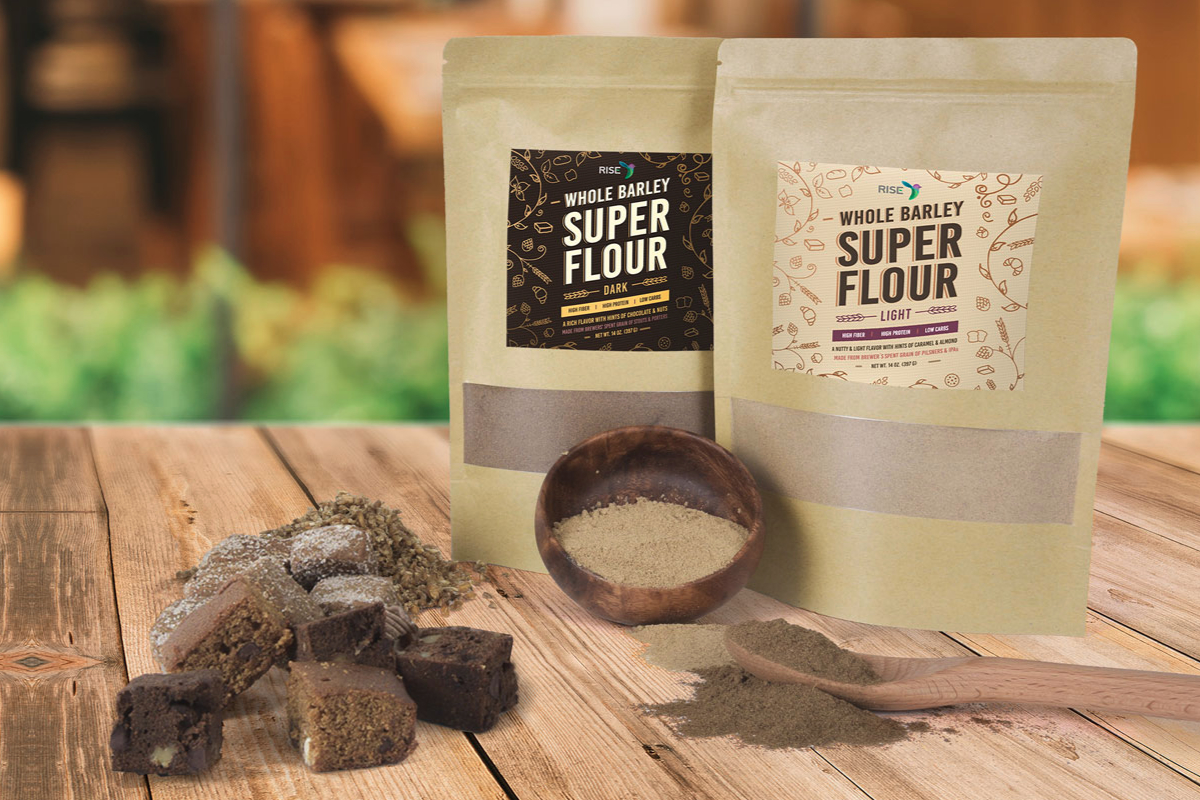 Rise Products produces and sells flour made from spent barley from beer. It is about 25% protein and 40% dietary fiber. The flavor and color varies by style of beer.

“The brewing process extracts sugars and starches from malted barley, leaving behind the protein and the fiber,” Ms. Jimenez said.

A lighter flour comes from the spent grains of ales and pilsners and has a nutty caramel flavor profile, while a dark flour with coffee and chocolate notes is produced from porters and stouts.

“Our artisanal batches are gently dried and stone ground,” Ms. Jimenez said. “While they are not gluten free, they can be used in gluten-free recipes when less than 20% of the total recipe. Some chefs use it as a flavoring agent in high-end cuisine. The dark flour can be used to reduce cocoa powder addition in some recipes.”

“In the traditional process, the cake — a mix of seeds and up to 20% hulls — remaining after the oil extraction is used for feed, wasted or burned,” said Edgar Hernandez, sales manager. “Planetarians developed technology to process the cake into a food-grade high-quality protein flour. The allergen- and gluten-free flour has 35% protein, 18% fiber, a slightly nutty flavor and is naturally non-G.M.O. It works best as a partial replacement for traditional flour in most applications. The flour is dark and boldly artisan looking.” 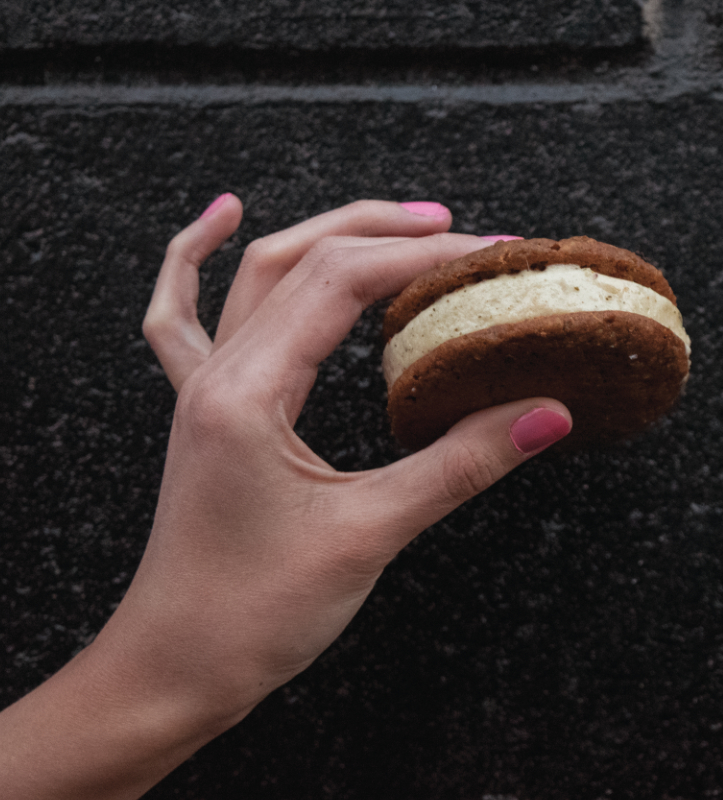 Chef Anna Fitting of Ice CREEM Social in New York City uses the flour to make buns, cakes and pizza crust. One of her specialties is a vegan ice cream sandwich novelty. The sunflower seed flour provides a nutty flavor and chocolaty color to the cake portion.

“These handcrafted frozen treats are all about upcycled plant-based ingredients,” Ms. Fitting said. “It’s a second-hand approach to ingredient sourcing, not just with the sunflower seed flour but also with the fruit used to make the center filling. Bruised bananas, carrot peels, pineapple cores and other produce scraps and irregulars are purchased from local purveyors. It’s very versatile with a subtle flavor that complements other flavors, especially chocolate and coconut, and does not overwhelm other flavors. It’s a great way to add natural dark flavor to baked goods.”

“About a third of the wheat flour is replaced with sunflower seed flour, which produces a delicate dough," he said. "Added fiber assists with binding water to accommodate for the lack of gluten. The sunflower seed flour contributes fiber and plant protein, boosting the nutritional profile of a vegan or vegetarian pizza. That stunning color reinforces the mindful food choice.”

While baked goods are the most common applications, other uses include plant-based meats, dips, spreads, soups and beverages.

“We forage the food system for streams of nutrition that are currently not utilized or are underutilized and convert them into novel ingredients,” said Claire Schlemme, c.e.o.

Renewal Mill currently sells okara flour, which is a high-fiber, high-protein, gluten-free flour made from the soybean pulp generated during soymilk production. The company is exploring byproducts from other non-dairy milks, including oat, almond and pea.

“Okara flour is an extremely versatile ingredient with a very neutral flavor, which is described as slightly milky or nutty," Ms. Schlemme said. "It has a light color allowing it to blend easily into most flour-based products, including pasta, pancake mix and cookies. Okara flour has a number of functional benefits, including having high water- and oil-binding abilities. This improves moisture retention and can lengthen shelf life of bakery products.” 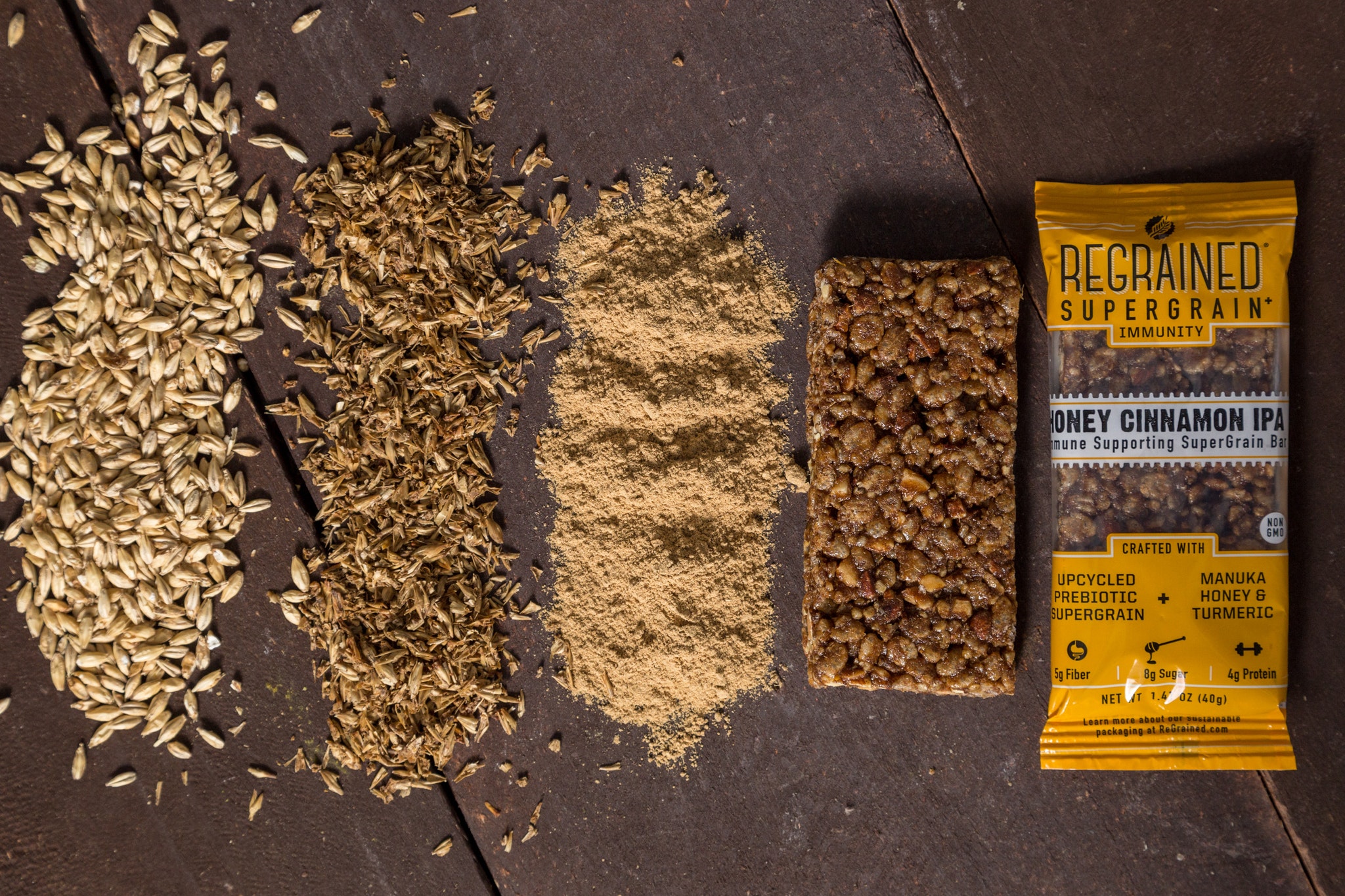 “Coffee flour is the dehydrated cherry fruit that enrobes each coffee bean,” said Philip Saneski, vice-president of product for ReGrained. “It is high in fiber and antioxidants. The taste is not bitter, like coffee, rather it has pleasant citrus and chocolatey notes.”

Carole Widmayer, senior vice-president of marketing and sales for CF USA, Inc., said, “As a fruit, it is naturally gluten- and allergen-free. Coffee cherry flour is best when used to replace 10% to 15% of traditional or other flour in a recipe, or up to 40% of cocoa powder in a chocolate-based recipe. It can also be used as a spice in a variety of applications.”

With its high dietary fiber content, coffee flour works well as a thickener for sauces and syrups.

Mr. Saneski is also working with green banana flour, which is a fine powder that is beige in color and has a neutral flavor.

“It is dried from whole green peeled bananas,” he said. “This product is naturally high in potassium, magnesium and prebiotic fiber and is known as resistant starch.”

Green banana flour is recognized as functioning similar to native cook-up starch and possesses unique thickening properties. This includes its ability to replace hydrocolloids in fluid system such as beverages and salad dressings, as well as stabilizing fruit systems.

“Alternative flours can add value to the same base diet consumers were eating before,” Mr. Saneski said. “Many contribute prebiotic fiber and plant-based protein, often with a social or environmental responsibility story.”