We use cookies to provide you with a better experience. By continuing to browse the site you are agreeing to our use of cookies in accordance with our Cookie Policy.
Home » Export hopes offset record U.S. hog, pork production

WASHINGTON — The U.S. hog and pig inventory has hit record highs for the date for 15 consecutive quarters, with the latest March 1 inventory of 74,296,000 head the highest March inventory ever and the third highest ever after Dec. 1, 2018, and Sept. 1, 2018, which was the all-time high at 75,136,000 head. As may be expected, pork production also has set records for months, and hog and pork prices have been under pressure, with profit margins for hog farmers in the red. But lean hog futures and cash pork prices have soared in recent weeks, giving hope to the beleaguered industry. And there are indications the pace of the multi-year herd expansion is slowing.

University of Illinois agricultural economist Chris Hurt said lean hog carcass prices averaged $45.92 per cwt in 2018, the lowest annual average since 2009, and that cash hog prices in February 2019 averaged $39.04, the lowest for the month since 2003. The breeding herd has been expanding since mid-2014, Mr. Hurt said, with expansion peaking in early 2018. Hog numbers were nearing all-time highs just as export tariffs hit last year. Further, domestic demand was less than robust, in part due to consumers’ focus on beef in good economic times rather than on pork. About 22% of U.S. pork is exported compared to about 11% of U.S. beef production. 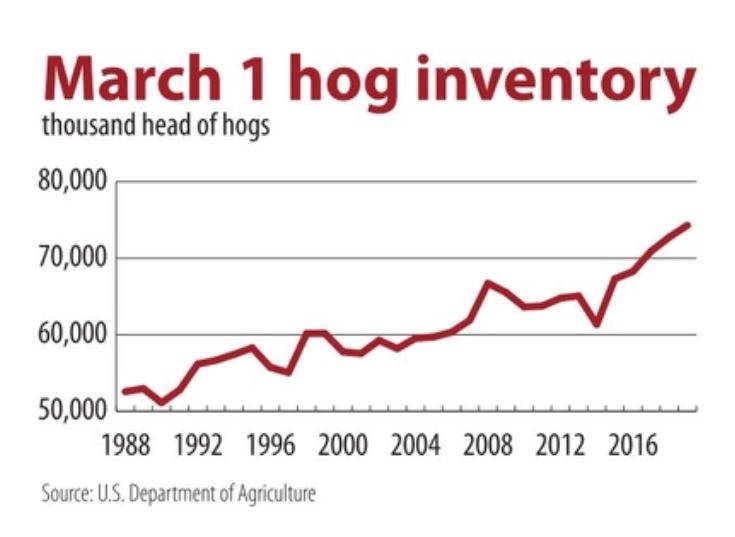 Just as trade issues contributed to the fall in hog and pork prices, so is trade pulling prices back up. The recent strength for the most part has been attributed to export optimism — a combination of hoped-for reduced tariffs on U.S. pork by Mexico and China and the loss of millions of hogs, largely in China, from African swine fever (A.S.F.).

It has been estimated that A.S.F. has wiped out 20% of China’s 710-million-head hog herd, the largest herd in the world. Some estimates from outside China put losses much higher.

While the March Hogs and Pigs report contained bearish news about hog numbers, it also included some data suggesting supplies may be peaking. The report indicated sows farrowing during the December-February period were up 2% from a year earlier, with the pig crop up 3% due to record-high pigs per litter. But farrowing intentions for March-May were up only 1%, and June-August intentions were down slightly from last year, although both periods still were up 3% from 2017.

Also encouraging for producers is hog prices tend to rise in the spring due to seasonally lower slaughter numbers.