We use cookies to provide you with a better experience. By continuing to browse the site you are agreeing to our use of cookies in accordance with our Cookie Policy.
Home » Spice is nice, but complexity is key

Spice is nice, but complexity is key

KANSAS CITY — Product developers have been in pursuit of the planet’s hottest peppers to capture consumer attention in recent years, but demand for extreme heat is taking a backseat to desire for complex flavors and specific pepper varieties.

“We have moved well beyond common Hispanic and Asian flavors that are now firmly established in the mainstream and into more hyper-local and specific regional flavors in the spicy flavor palate,” Ms. Greene said. “Crushed chili peri peri sauce from Africa and Portugal, the fruity and spicy aji Amarillo pepper from South America, a wide variety of curries from India and the Korean fermented red pepper paste gochujang sauce are coming into consumer consciousness similar to the way that sriracha sauce did. The hot sauce section at the grocery store is my favorite area to peruse because it’s always expanding with new brands from both some of the expected players and with local and niche brands.”

From the Middle East, schug (or zhoug) is beginning to gain traction as a Mediterranean hot sauce featuring red peppers or jalapeños, Ms. Greene said. Over the past four years, gochujang has increased more than 200% on restaurant menus in the United States, while peri peri has climbed 41% and schug is up 75%, according to the menu tracking market research company Datassential. 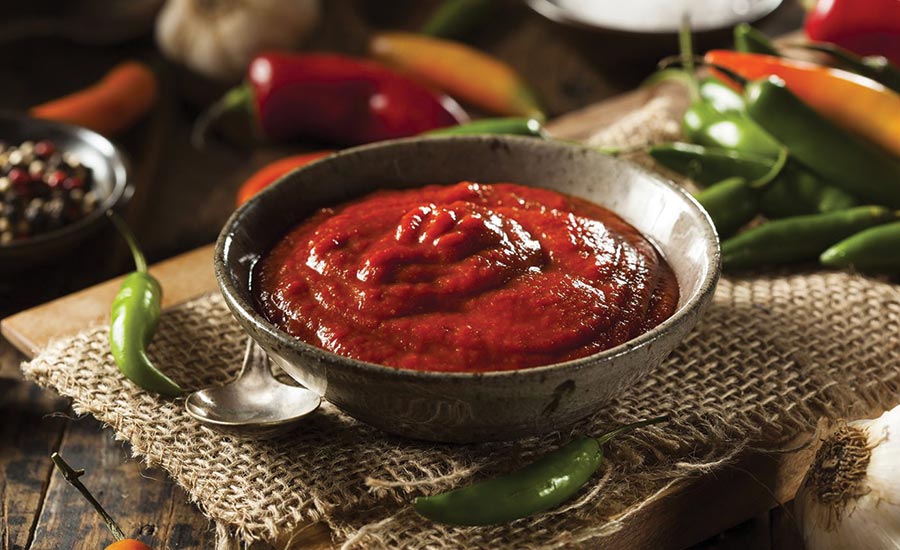 “Consumers value knowing where their food comes from, including knowing where it originated and was grown and what the specific varietal of pepper is,” said Jill Puckett, market development specialist at Kalsec, Kalamazoo, Mich.

“These flavors are gaining traction as consumers travel, eat at authentic international restaurants and explore cooking new cuisines in their own homes with the help of recipe sharing online and increased access to ingredients through expanded selection at traditional grocery stores, specialty grocery stores and online grocery markets,” she said.

“I think American food is really going to get out of that bland zone and get into that high-heat zone,” said Jill Houk, corporate research and development chef for Olam Spices, Willowbrook, Ill. “You’ve got kids doing internet challenges and trying things that are super spicy… You see ghost pepper chips, you see scorpion pepper chips, and then you see spice cross over into other categories like sweet foods.”

Scorpion pepper is native to Trinidad and Tobago and ranks as one of the hottest peppers.

“It looks a little bit like a scotch bonnet or a habanero,” Ms. Houk said. “It’s a bright red, small, fruity pepper. It was specifically bred to be exceptionally hot.

“Scorpion pepper has a really beautiful citrusy, fruity flavor under all this heat, and so the key is to bring that out, so you have to lower the number of Scoville units. Maybe you cut in a neutral pepper, or maybe you cut in jalapeños, and then this fruity expression can come out.”

In addition to exploring new sources of heat, consumers are experimenting with new combinations of familiar flavors, Ms. Puckett said.

“A good example of this is chipotle,” she said. “The pepper offers a smoky, spicy flavor that interests consumers and can be paired well with other flavors, such as to create a sweet/smoky/spicy flavor like maple chipotle that goes well with breakfast sausages and snack mixes alike.” 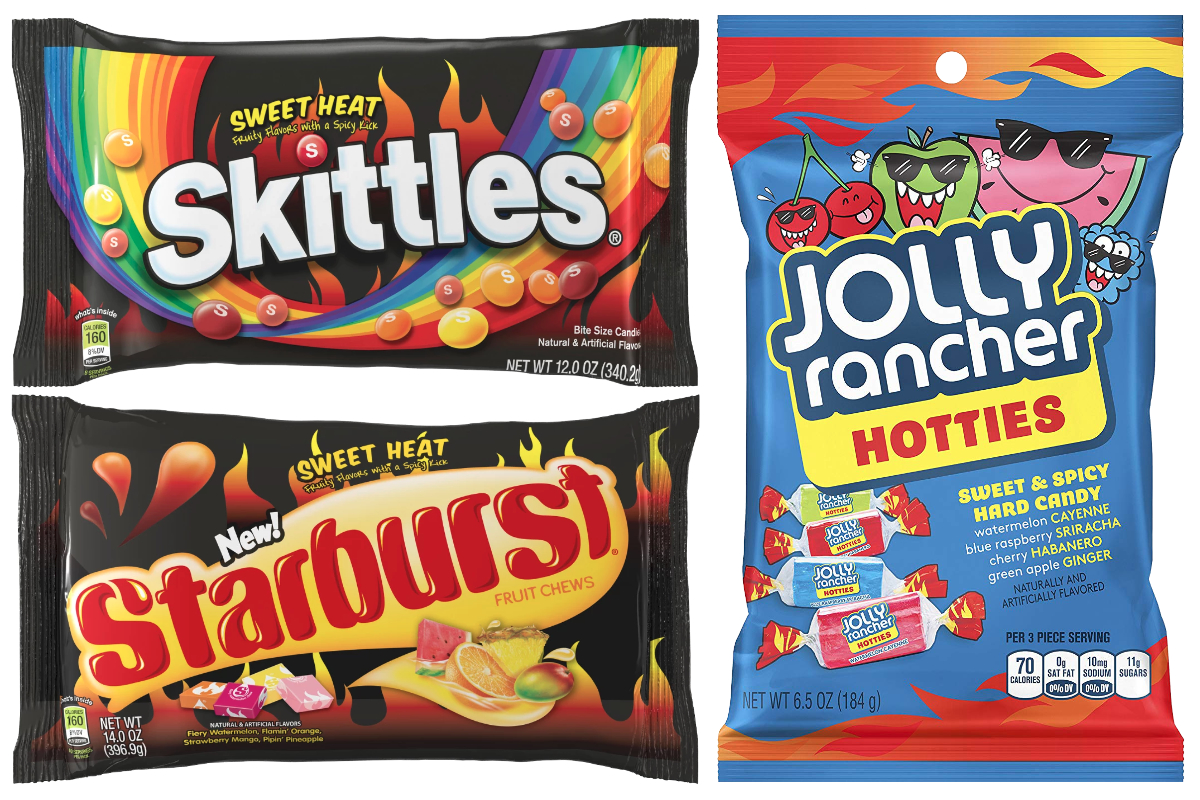 “There have been quite a few new product launches of traditional candies with heat added,” said Peggy Iler, lead scientist at Kalsec. “Sweet and heat combinations have been trending for some time now, so candy and confections are the perfect application. And consumers can try them without a lot of risk involved. These candies are more than just heat; they call out specific flavors or peppers.”

“In ice cream the fat content and texture of the base adds complexity to the sweet and heat combination,” Ms. Iler said. “Caramel and chocolate add additional sweet complexity and places to experiment with different spicy flavors. It would be fun to see a swirl in the ice cream that has a different fat content so that the flavor and/or heat expresses differently than the base, providing a multi-dimensional aspect. You could also have heat and cooling in the same bite of ice cream.” 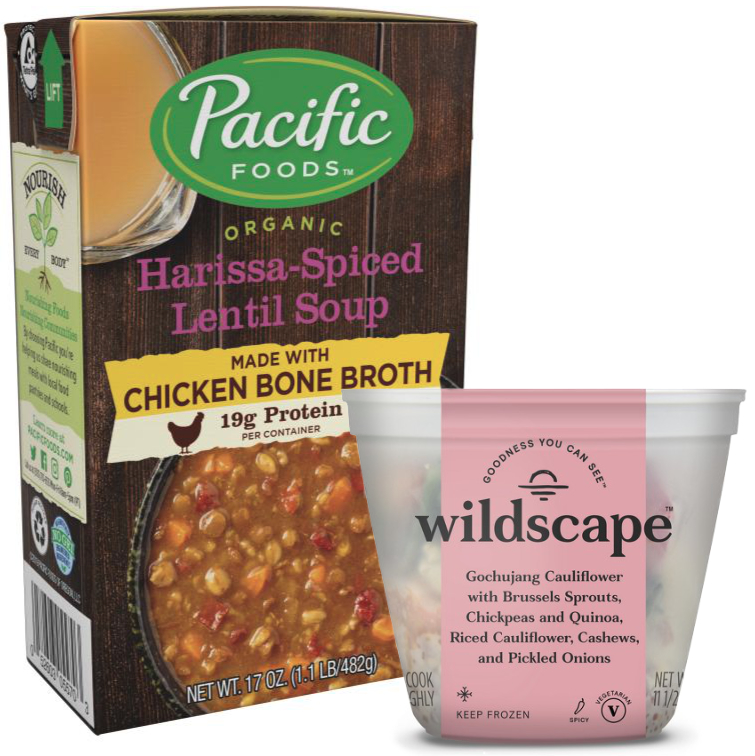 “Pairing them with dairy is very common as it takes the sting out of the pepper and gives consumers a more nuanced flavor experience,” Mr. Lane said. “Chocolate also pairs well, especially dark chocolate. The floral/citrus notes in peppers complement those same flavors found in chocolate.”

“The heat and variety from peppers is so accessible and versatile that manufacturers can use it in combination with a smoky flavor, a savory take or with a sweet and fruity flavor blend,” she said. “Flavor balance is key to a great profile in any sauce, so flavors that combine one or more pepper with a sweet or tangy profile continues to rise.

“Beyond the plate, cocktails and brews with peppers are on trend, and the combination of heat with a fruity base — such as a jalapeño grapefruit margarita — is very popular.”

The Coca-Cola Co., Atlanta, is launching vitaminwater fire, a bottled water with a spicy watermelon lime flavor “that doesn’t hesitate to bring the heat,” according to the company. The product has a touch of jalapeño and habanero that spark a “slight tingling sensation.”

“Beverages including spicy flavors can be found on more flavor-forward beverage menus and can even be found paired with fruit flavors in frozen desserts like popsicles,” Mr. Lane said.