We use cookies to provide you with a better experience. By continuing to browse the site you are agreeing to our use of cookies in accordance with our Cookie Policy.
Home » ‘Clean energy’ driving beverage innovation

CHICAGO — Before sleek cans and shot-style bottles, there was the cup. From an oversize ceramic mug to the portable lidded paperboard or foam container, a cup of joe was what one turned to when looking for an energizing beverage. While Red Bull, 5-Hour Energy and similar energy drinks continue to have a strong presence in the pick-me-up and get-me-going beverage business, consumers’ desire for “cleaner” energy has many marketers taking a back-to-the-basics approach when formulating new beverages, with many relying on coffee and its close cousin tea as a base or dominant ingredient.

Fueled by caffeine, coffee is an on-trend energizing beverage, in its traditional format as well as in mashups, according to the U.S. Beverage Market Outlook 2019 report from Packaged Facts, Rockville, Md. Mashups are designed as the crossover fusion of two or more products that traditionally wouldn’t be expected to go together. Mashups are one of the hottest beverage trends, according to the research firm, with most of the new concepts providing a jolt of natural energy from the caffeine inherently present in coffee and tea.

“There is an increasing blurring of the lines between sports and energy drinks, and indeed for many beverage categories,” said David Sprinkle, research director for Packaged Facts. “An excellent example of that are hybrid ready-to-drink (R.-T.-D.) energy teas and coffees. Coffee and tea are naturally energizing. Most Americans would consider these beverages their original energy drink. After all, they share the most ubiquitous energy ingredient — caffeine — with today’s most popular energy drinks. Even everyday cola and its caffeine are used by many consumers as energy drinks. More recently, entrepreneurs have launched coffee and tea-based beverages that more clearly play upon their energy functionality.” 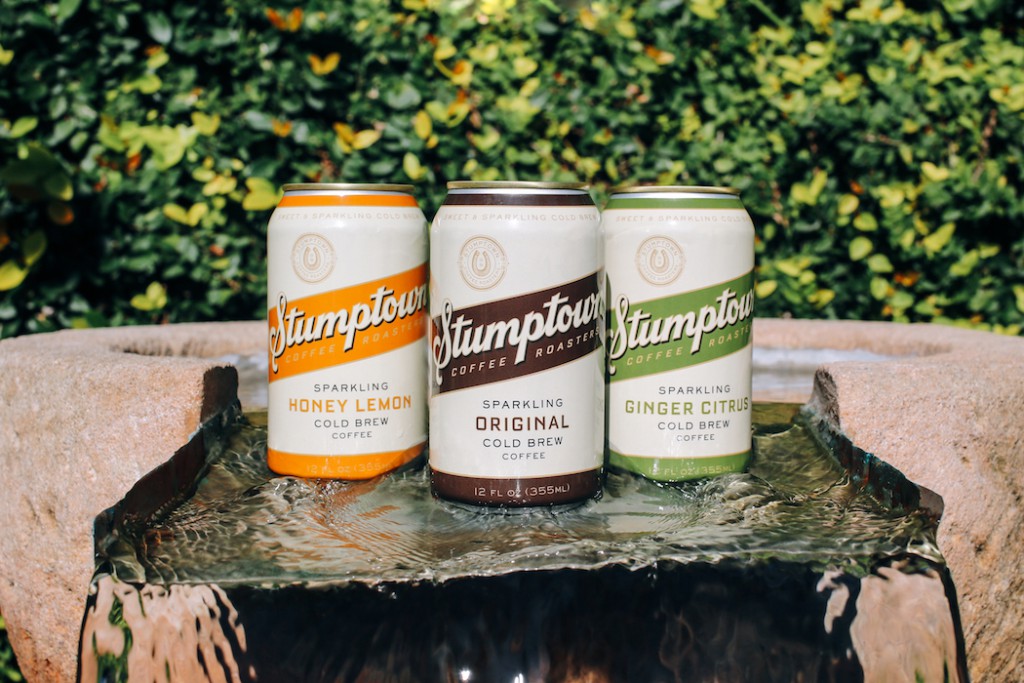 Coffee is being integrated into sparkling beverages, traditional energy drinks and even juices. The trend should see continued expansion as consumers seek the indulgence and flavor of coffee while also thirsting for the effervescence of a carbonated beverage, the additional boost of energy ingredients or simply more taste options, Mr. Sprinkle said.

“The carbonated soft drink category is challenged, but many consumers moving away from soda still want flavored drinks that have bubbles,” Mr. Sprinkle said. “They also want healthier, more natural versions with less or no sugar. One of these soda alternatives is R.-T.-D. coffee, which has seen a spate of sparkling versions on store shelves.”

He explained that most Americans simply like coffee’s taste. This is likely attributed to Starbucks’ omnipresence across the country, with many younger consumers introduced to brewed beans at an early age.

Packaged Facts reports that coffee and R.-T.-D. coffee sales reached $14.5 billion in 2018 and should be near $18 billion by 2023, reflective of a 3.8% compound annual growth rate. Growth will be driven by R.-T.-D. beverages infused with functional ingredients, including protein, better-for-you fats such as medium-chain triglyceride (M.C.T.) oils from grass-fed butter and coconut, adaptogens and even cannabidiol (C.B.D.), the non-psychoactive compound of the cannabis plant.

The trajectory of tea

Ready-to-drink tea is on a powerful upward trajectory as well, with the steeped leaf beverage being mashed with other beverage concepts into sparkling juices, lattes and smoothies. The results impart tea’s health benefits — namely its high concentration of antioxidants — into beverage concepts that often have a wider appeal to younger adults than straight R.-T.-D. tea. 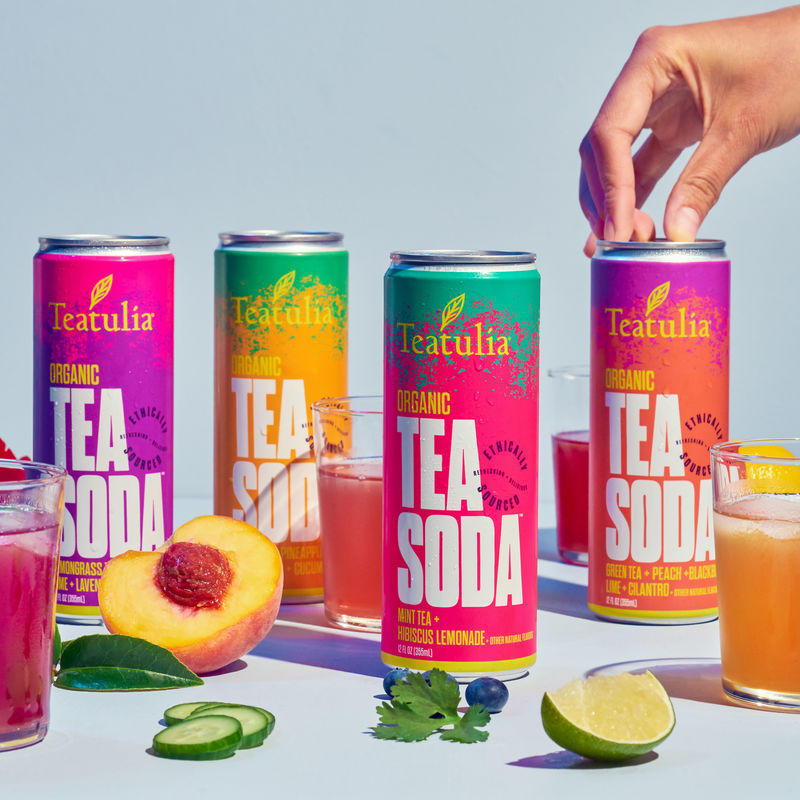 When it comes to the combined category of products positioned as energy and sports drinks, sales are exploding. Packaged Facts said sales reached $21.6 billion in 2018 and should be nearly $28 billion by 2023, based on a 5% compound annual growth rate. Energy drinks represent two-thirds of the combined category, outperforming sports drinks. However, even within this category, there are many mashups taking place, making it difficult to label a product as either an energy or sports drink.

“Clean energy and hydration will remain a focus,” Mr. Sprinkle said. “Beverage mashups will accelerate and bring other beverage drinkers into the category.”

Consumers refer to caffeine as energy, but in biological terms, it is a stimulant. It is found in the leaves and fruits of an array of plants and may be added to beverages in the form of a plant-based ingredient or as an isolated white powder. Whatever the format, caffeine easily passes from the bloodstream into brain tissue.

Caffeine is not metabolized and therefore calorie free. It functions by attaching to receptors on brain cells, stimulating the brain and thereby increasing mental alertness. Consumers perceive this as being a boost in energy. 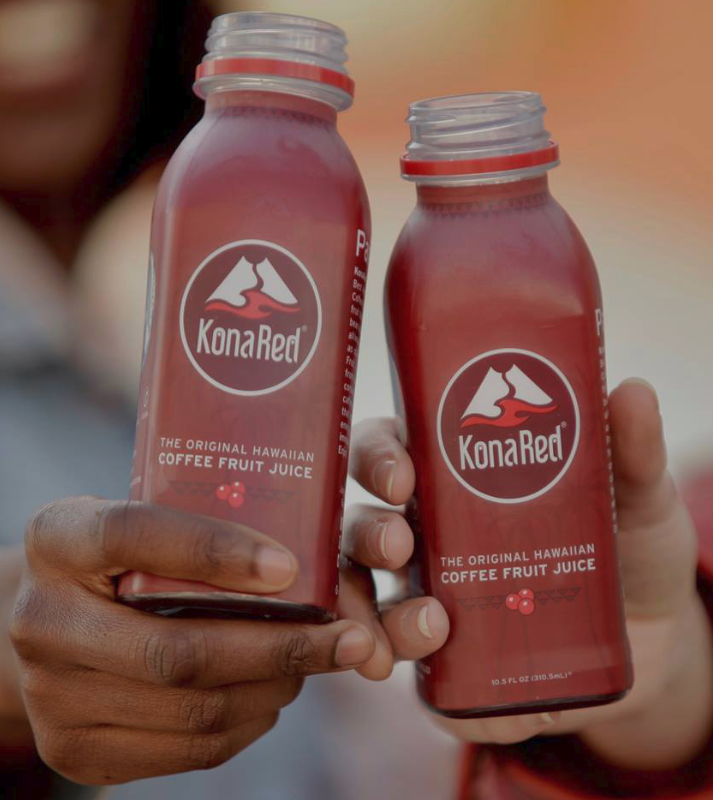 In addition to brewed coffee and steeped tea being sources of caffeine, other plant-derived ingredients — some referred to as adaptogens — are sources of caffeine and other stimulating chemicals and may be used in energy-style beverages. Coffee fruit, also known as the coffee berry, is the fruit surrounding the coffee bean. Previously discarded as a byproduct of coffee production, coffee fruit has been scientifically recognized as an antioxidant powerhouse with robust wellness qualities, including healthy energy, immune support, weight management, joint support and cognitive function.

Guarana extract is obtained from the seeds of the guarana plant’s fruit. The seeds are a more concentrated source of caffeine than coffee beans, which makes guarana extract a common ingredient in energy drinks.

Guayusa extract is an emerging source of caffeine. Obtained from leaves of the guayusa plant, the extract contains caffeine and theobromine, another natural stimulant. When the two stimulants are consumed together, one should experience a balanced energy without jitters, crash or jolted buzz.

Dried leaves of the guayusa plant may be brewed and consumed much like traditional tea. The main differences are that guayusa extract contains double the amount of antioxidants in green tea and does not contain any tannins, which are what make tea astringent and bitter.

Ginseng is a caffeine-free stimulant obtained from more than a dozen species of ginseng plant. Korean Ginseng, the most common source, often is referred to as the original ginseng. The roots contain an array of nutrients, including antioxidants, vitamins, minerals and compounds called ginsenosides. It is the ginsenosides that are believed to have a stimulating metabolic effect on the central nervous system and provide a boost to energy and stamina. 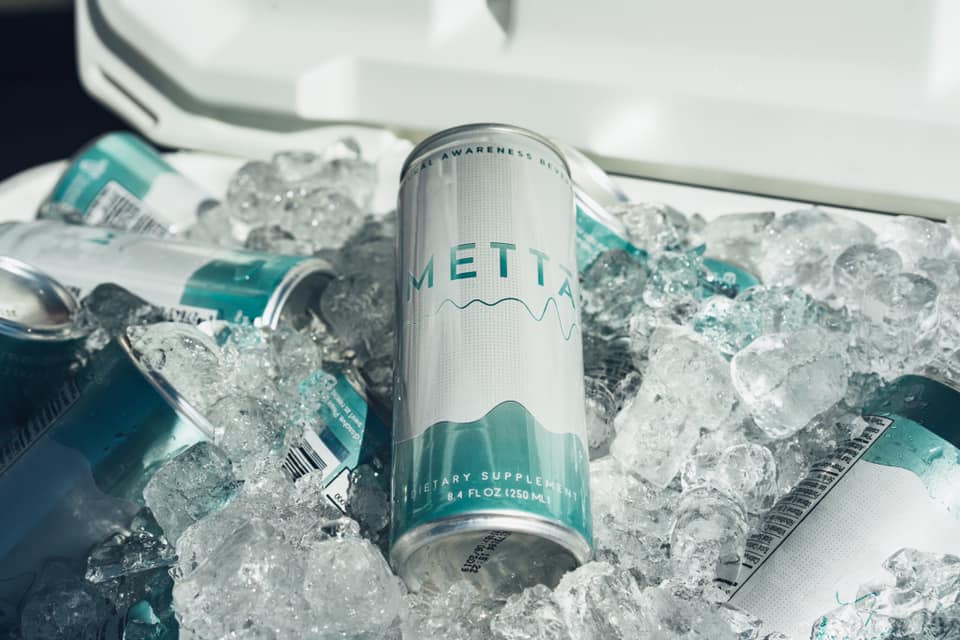 Metta Beverage Corp., Vancouver, B.C., is introducing a namesake energy beverage described as the world’s first natural awareness beverage. It uses adaptogens and natural ingredients to improve mental and physical performance. It is free of caffeine, refined sugar and anything artificial. The company uses natural herbs to provide long-lasting natural energy. This includes ginseng, as well as rhodiola, an herb traditionally used to promote mental clarity and acuity. Studies have shown it enhances permeability of the blood-brain barrier, allowing dopamine and serotonin to circulate more easily, stabilizing a person’s mood naturally.

The Coca-Cola Co., Atlanta, is launching its first energy drink under the Coca-Cola brand in Europe. Coca-Cola Energy comes in the traditional energy drink sleek can in sweetened and no-sugar varieties. The beverage contains 80 mg of caffeine from naturally derived sources (compared with 24 mg in classic Coca-Cola), guarana extracts and B vitamins.

The sweetened and non-sweetened varieties differ in approach to providing stimulating energy, with or without metabolic energy, which from a biological point of view is true energy. That is because true energy comes from ingredients that are metabolized and therefore provide calories.

Metabolic energy refers to the Krebs cycle, a complex pathway that converts ingested carbohydrates, fats and proteins into a slow, steady stream of energy — adenosine triphosphate — during the process of aerobic respiration. This energy fuels the body’s cells to keep the body working, with the unit of energy measured in calories. In general, simple carbohydrates, namely refined sugars, tend to be quickly absorbed by the bloodstream after ingestion. They are responsible for a quick metabolic energy boost. 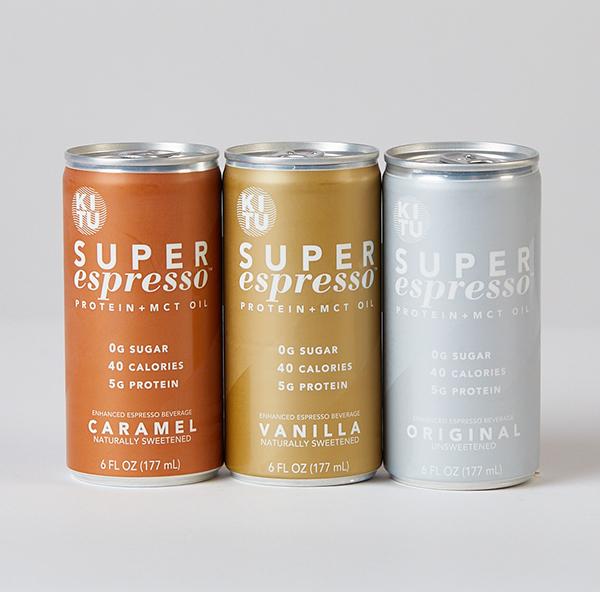 Many B vitamins are known to participate in this energy-producing process, though they themselves are not metabolized. They contain no calories and therefore are not energy. Still, because they are components in the Krebs cycle, they are often included in energy beverages.

When it comes to metabolic energy, not all carbohydrates, fats and proteins are metabolized the same. Medium-chain triglyceride oils are now being added to energy drinks. They are said to fuel the body with a sustained, clean energy that satiates appetite and reduces cravings. The M.C.T. oil also has been shown to provide a cognitive boost, support fat burning and balance mood and hormone levels.

It is the addition of M.C.T. oil that now has New York-based Aloha in the natural energy beverage business. The brand’s new protein drink line provides 18 grams of plant protein with 5 grams of coconut sugar, along with a blend of electrolytes to replenish nutrients, prebiotics for improved gut health and M.C.T. oil derived from coconuts for natural energy and endurance.

“It (M.C.T. oil) was a direct ask of our consumers, who we know are active people, often exercising regularly and are frequently on the go,” said Brad Charron, chief executive officer of Aloha. “When you need a little extra energy, why give your body any other source than something natural and additive?”

Kitu Life Inc., New York, is rolling out Super Espresso, which is a 6-oz can with 180 mg of caffeine from three shots of espresso and no added sugar. It does provide sustained metabolic energy from whey protein concentrate and coconut M.C.T. oil. It also contains l-theanine, an antioxidant found in green tea. This combination of ingredients is said to provide a smooth, sustained, energy boost without the crash.

“Everybody needs energy, and until now, the only fast and effective energy options on the market are loaded with sugar and artificial ingredients,” said Jordan DeCicco, co-founder. “Super Espresso provides the energy we all need without the sugar, and the added benefits of healthy fats and a little bit of protein.” 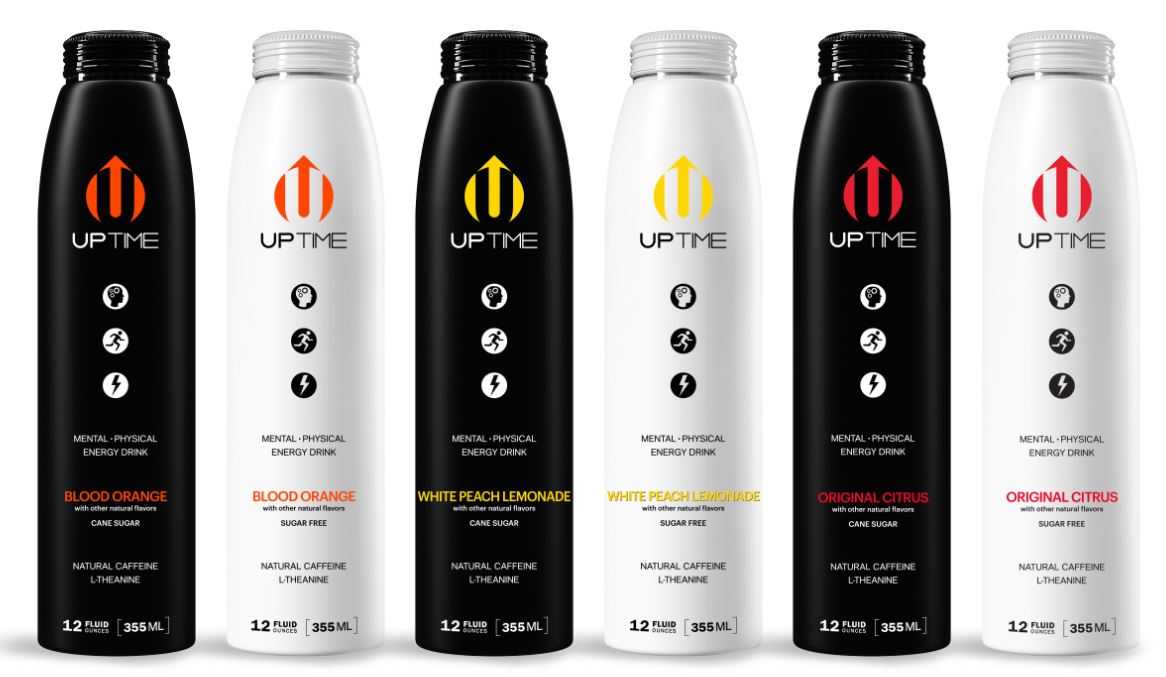 Uptime Energy Inc., Van Nuys, Calif., includes l-theanine in its line of “better-for-you” energy drinks designed to deliver a balanced boost while promoting clarity and focus. The company also includes natural caffeine, ginseng and coenzyme Q10. Similar to a vitamin, coenzyme Q10 functions as an antioxidant. It is used by cells to produce the energy that the body needs for cell growth and maintenance and helps sustain heart health and blood pressure.

Some specialty carbohydrates are recognized for providing sustained energy. One such ingredient is isomaltulose. Derived from sugar beets, isomaltulose is a fully digested carbohydrate, but it is digested more slowly than other sweeteners, resulting in a full supply of energy from glucose over a longer period of time. Being low-glycemic, it releases energy the balanced way without sudden peaks and drops of the blood glucose level.

Isomaltulose also has been shown to promote the body’s own fat oxidation. This means it increases the ratio of energy derived from fat relative to the total amount of required energy while active, leaving carbohydrate stores available for longer.

Ribose, a naturally occurring sugar made in the body from glucose, also accentuates the body’s natural process of energy synthesis. Ribose helps to reduce the loss of energy during stress and accelerates energy and tissue recovery. Through this action, ribose helps muscles regenerate lost energy and potentially minimizes any physiological consequences of the energy depletion situation.

Succasunna, N.J.-based Push Beverages is bringing back Liquid Lightning Energy Drink, a product that has been out of production for several years. The revival includes a package redesign and resizing (from 8.4- and 16-oz options to the “energy” sleek 12-oz can) and replacing high-fructose corn syrup with pure cane sugar. Regular and zero-calorie versions are available. Liquid Lightning boasts a wide array of energy boosters, including ribose, caffeine, ginseng, B vitamins and others. The company said its unique blend of ingredients eliminate the crash that often occurs after the energy boost.