We use cookies to provide you with a better experience. By continuing to browse the site you are agreeing to our use of cookies in accordance with our Cookie Policy.
Home » Organic sales double over five-year time span

WASHINGTON — Total sales of certified or exempt organic commodities have more than doubled since 2012, according to the U.S. Department of Agriculture’s 2017 Census of Agriculture. Sales of organic products more than doubled on the largest organic farms (those with $50,000 or more in annual sales), while smaller farms recorded a slower rate of growth during the period. 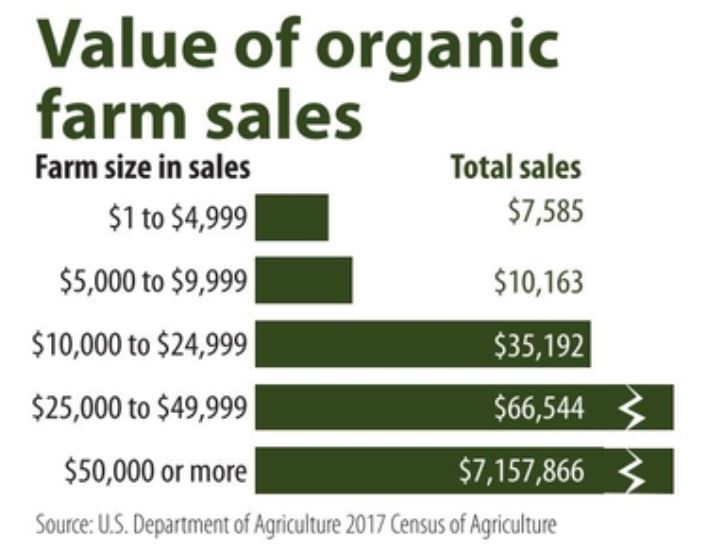 U.S. consumers spent nearly $50 billion on organic products in 2017, with organic food sales accounting for 5.5% of total retail food sales, according to the Organic Trade Association. While there is a growing amount of space allocated to organic products on grocery shelves, most organic grain is used for livestock feed, which is required for eggs, meat and other animal products to be certified organic.

Even with the surge in organic commodity sales and the sharp increase in the number of certified organic farms, domestic organic commodity production has been unable to keep pace with demand for organic feed and food products. Farmers must meet rigorous, multi-year standards for their products to receive U.S.D.A. organic certification. The shortfall is made up by imports of organic grains.

“The market for the top three U.S. organic commodities — corn, soybeans and wheat — continues to be led by growing demand for organic livestock feed,” Mercaris, the organic and non-G.M.O. trading platform and market information company, said in its 2018-19 Organic Commodities Outlook.

Mercaris estimated U.S. organic corn production in 2018 at 59.5 million bus, up 5% from 2017, while imports of organic whole and cracked corn were forecast to increase by 10% in the 2018-19 marketing year. The supply of organic corn for food and residual was forecast up 2% from the prior year.

U.S. organic soybean production was record high in 2018, but total supply was down 4% at 20.5 million bus due to lower imports, Mercaris said. The supply of organic soybeans for food and residual was forecast at 8.1 million bus, up 11% from 2017-18.

Domestic production of organic wheat increased an estimated 8% in 2018, and overall “U.S. organic wheat supplies appear robust,” Mercaris said. Demand for organic wheat for food and residual use was forecast up 4% in the current marketing year.

While the latest Census report included a broad picture of U.S. organic production, the U.S.D.A. will conduct its 2019 Organic Survey as a “follow-on special study to the 2017 Census of Agriculture” later this year for release in the fall of 2020.