“During the first quarter of 2019, we made strong progress against our plans to unlock healthy growth and modernize our brands for the next generation of consumers,” Mr. Hoffman said during a May 2 call with financial analysts. “The Blueprint for Growth, our long-term strategy for Dunkin’ U.S., is producing meaningful results for customers and franchisees. Performance was enabled by the actions we put in place throughout 2018 such as menu simplification, rebranding, our first foray into national value, espresso, improvements to the app and all of this coupled with some intensive focus on training and better execution. These results demonstrate the $100 million investment we committed to the Dunkin’ U.S. business last year is paying off.”

“We are seeing our market leadership in hot and iced drip coffee translate into the incredible success of our espresso relaunch,” Mr. Hoffman said. “We’ve grown the category by 30%, and it brought new guests into our restaurants. Most importantly, we’ve also maintained our operational speed, critical to customers who come to us every day expecting great coffee fast. High-quality espresso beverages sold at a fair price and served at the speed of Dunkin’ is something only we can do. It’s why we believe we are the brand that could democratize espresso, and why we’re committed to the category for the long term.”

Dunkin’ also debuted the Power Breakfast Sandwich in the recent quarter, marking the “first step for us into the better-for-you category,” Mr. Hoffman said. Launched in January, the breakfast sandwich features an egg white omelet with spinach, peppers and onions topped with turkey sausage and American cheese served on a multigrain sandwich bread that is topped with seeds and rolled oats. 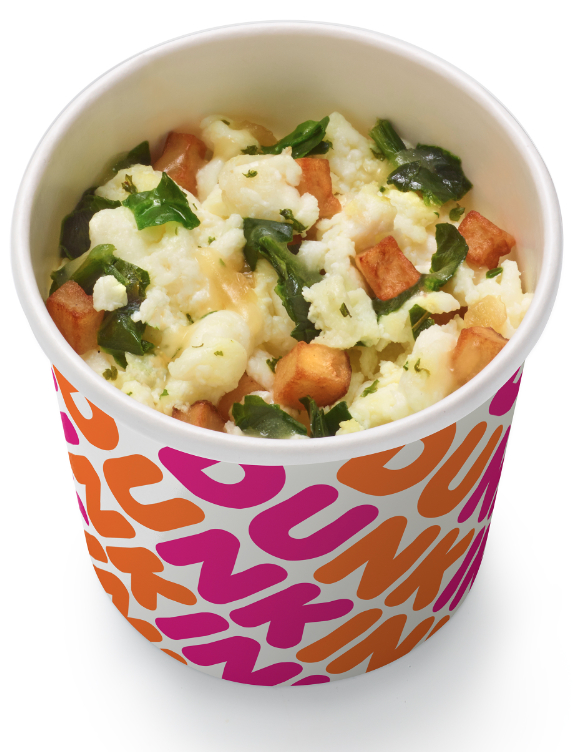 “We’re particularly proud with the success of the Power Breakfast Sandwich,” he said. “It has around 350 calories, 24 grams of protein and had a higher-than-average trial and repurchase rate. It proves customers are open to more menu options at Dunkin’. And right now, we’re building off that success with the recent launch of the Egg White Power Bowl, which has 14 grams of protein and only 250 calories.”

The new bowl is made with egg whites, spinach, roasted potatoes, cheddar cheese and caramelized onions. The chain announced the menu addition in late April.