CHICAGO — Cannabis is a friend and foe to the snack industry, said Marcia Mogelonsky, Ph.D., director of insight at Mintel Food & Drink, Mintel. The effect of a growing recreational marijuana market may create major challenges as well as opportunities for confectionery manufacturers.

“The most popular way to enjoy recreational marijuana is through edibles, including chocolate and candy,” Dr. Mogelonsky said during a presentation at the Sweets & Snacks Expo, held May 21-23 in Chicago.

Recreational marijuana is legal in 10 states and the District of Columbia, Canada and several European markets. In a survey of legal cannabis users, 58% say they are interested in chocolate candy edibles, and 47% are interested in sugar confectionery edibles, according to Mintel.

“There’s going to be lots of room to develop chocolate and gummies and gum with recreational marijuana in them,” she said. “There’s a synergy … and it’s especially popular among the youngest cannabis users. They’re in fact trading alcohol use for cannabis use, and they’re getting their cannabis through candy.

“Your problem is, how do you keep the kids away from it? And that’s a huge problem because if a brand is a kid-friendly brand, it can’t go anywhere near cannabis. You just can’t do it.”

Dr. Mogelonsky cited the example of caffeinated gum launching several years ago in the marketplace. Alert Energy Gum was yanked from shelves while the Food and Drug Administration investigated the safety of caffeine in foods and its effect on children and adolescents.

A few years later, Mars, Inc. relaunched the product “with more sophisticated packaging where it doesn’t appeal to kids at all,” she noted.

In the case of cannabis, established confectionery companies may develop completely new brands marketed to adults for the edibles market, she said.

“That has got to be key, is making sure these things do not appeal to kids,” she said. 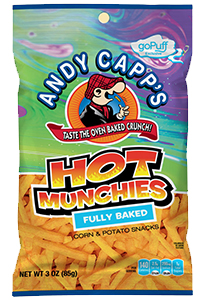 Manufacturers of salted snacks may benefit from “a traditional association between marijuana and the munchies,” Dr. Mogelonsky said.

An example is Andy Capp’s, a line of flavored corn and potato snacks produced by Conagra Brands, Inc. The company offered a Fully Baked Hot Munchies variety, which was available through goPuff, a digital convenience store delivery service, on April 20.

“This is a trend I’ll be watching going forward because this is a huge, huge change to the entire snack market,” Dr. Mogelonsky said.

While cannabis may merely be budding in the snack industry, several full-blown trends are impacting the market today. Taste remains the top consideration for snack purchases, but color, texture and aroma, as well as dynamic and dramatic packaging, are becoming more important, Dr. Mogelonsky said.

“The buzzword is a word that didn’t exist 20 years ago: ‘Instagrammable,’” Dr. Mogelonsky said. “Can you put this on your Instagram page…? Is it something that’s going to stand out and capture the attention of your followers?”

“If you can have a product that changes texture while you’re eating it — think about a chocolate bar with popping candy in it — that’s another consideration for choosing a snack,” she said.

Brands should tap into authenticity, transparency and tradition. Twenty-nine per cent of salty snack eaters eat the same snacks they ate as children, according to Mintel, creating demand for established brands to reinvigorate classic offerings. There is also room for “new-stalgia,” Dr. Mogelonsky said, describing snacks that have an elevated positioning with simple or novel ingredients.

“What I see happening is that ‘new-stalgic’ snacks will become nostalgic snacks as millennials and Gen Z have kids,” she said. “’New-stalgic’ snacks could be … dried mushrooms or other dried snacks or are going to become what the millennials will give to their kids and will continue to eat going forward.”

Personalization and customization also are driving new product development in snacking. One approach is crowdsourcing, as seen with PepsiCo’s launch of Lay’s Do Us a Flavor campaign that invited consumers to submit and vote for potato chip flavors. Brands also may create custom blends of granola, trail mix or nuts designed online by the consumer.

Additionally, consumers seek a balance of health and indulgence in snacking. This may be achieved through portion control, such as “bites, bits and minis,” or by adding a healthful component such as protein or probiotics, Dr. Mogelonsky said.

Sixty-nine per cent of snackers agree that anything can be a snack, according to Mintel. This creates more competition than ever for traditional snack manufacturers.

Moreover, any time is snack time, and snacks are available around the clock through online ordering, instant delivery and vending.

Seventeen per cent of Americans snack five times a day or more, according to Mintel.

Snacks are sold just about anywhere, creating even more consumption occasions and opportunities.