We use cookies to provide you with a better experience. By continuing to browse the site you are agreeing to our use of cookies in accordance with our Cookie Policy.
Home » Exploring the flavors and functions of alternative fats

Exploring the flavors and functions of alternative fats

CHICAGO — Without fat, many foods lack substance. Fat dissolves and concentrates flavors and aromas, and depending on the source, may bring its own flavors to a recipe. Think: buttery croissant, coconut cream curry and sesame oil stir fry.

Fats add richness and mouthfeel, and in baked goods, contribute to a flaky texture. They keep proteins juicy and snack chips crispy. They function as cooking medium as well as lubricant. Most importantly, fats make foods craveable.

Today’s food professionals are exploring the functionality of an extensive range of animal, plant and even microbial fats. While use of some specialty products is limited in commercial food manufacturing because of cost and shortened shelf due to oxidative breakdown, that’s not stopping chefs from getting creative with these and other alternative fats. 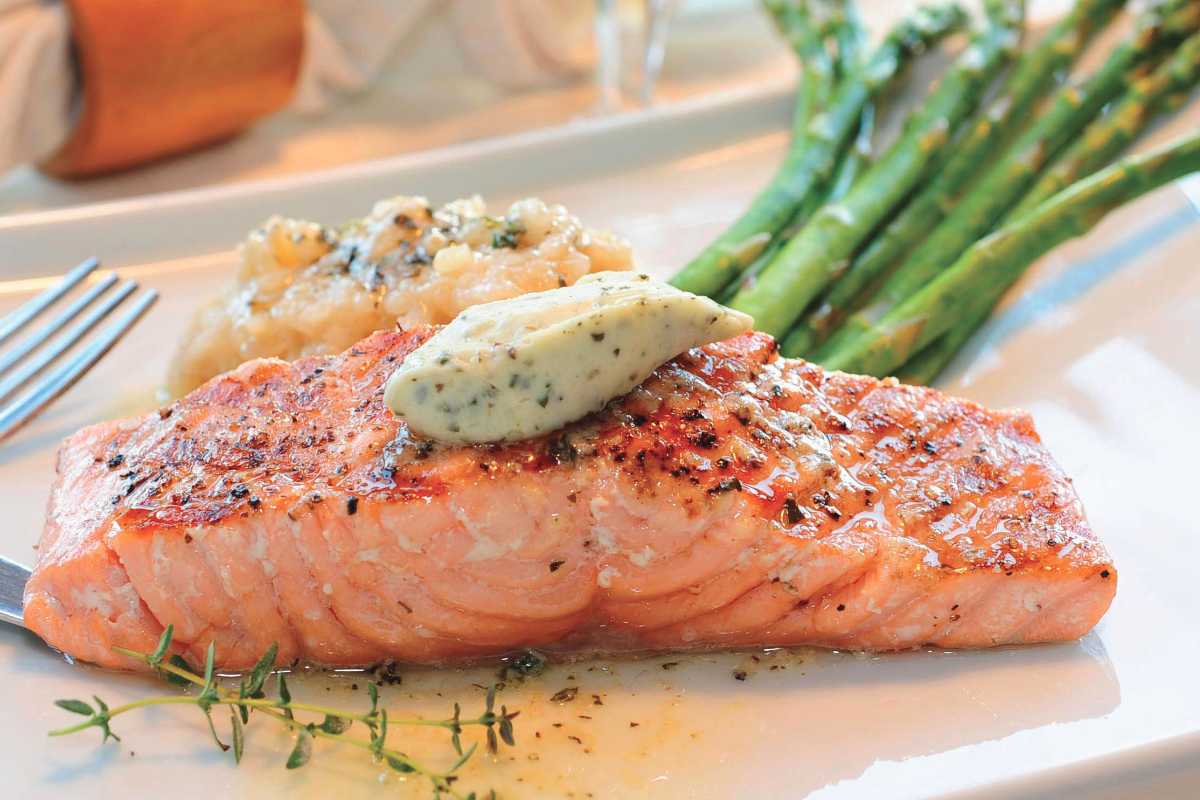 U.S. federal regulations require butter be at least 80% milkfat. That is what most commercial manufacturers target since milkfat is expensive compared to the about 18% water that butter still contains. The miniscule remainder is solids, including protein, carbohydrates, vitamins and minerals.

Throughout most of Europe, butter contains a minimum of 82% milkfat, with many companies claiming levels as high as 85%. The extra milkfat results in a softer, richer-tasting butter.

The milk and cream used in most European-style butters is often cultured with lactic acid bacteria. This gives the butter a tangy taste. American butter may also be cultured, which adds a layer of richness.

Both types of butters come salted and unsalted and are appreciated by product developers for their excellent sautéing, laminating and flavoring abilities. But, it’s the further refined butters that make dishes standout.

Compound butters, also known as finishing butters, for example, are infused with fresh herbs, spices, chopped fruits and vegetables, or even sweet substances like caramel, chocolate or maple syrup.

“Compound butters have been used in French cooking since the 1800s,” said John Hubschman, co-founder of Epicurean Butter. “To make them on your own requires having fresh herbs and spices on hand. We offer a speed-scratch solution, giving chefs access to premium, often rare ingredients, such as Italian truffles. This also saves on labor and ensures consistency."

Another premium milkfat is clarified butter, which is made by heating butter to the point where water evaporates and the milk solids separate from the fat and are removed. The finished product is almost 100% pure milkfat.

Ghee, also known as ghrita, is a type of clarified butter. It originated in India and is now commonly used in Middle Eastern and Asian cuisines. In the production of ghee, the milk solids are cooked long enough to caramelize, imparting a nutty flavor to the final product. The solids are then removed. While still in liquid form, flavors and salts may be added for an extra culinary experience. 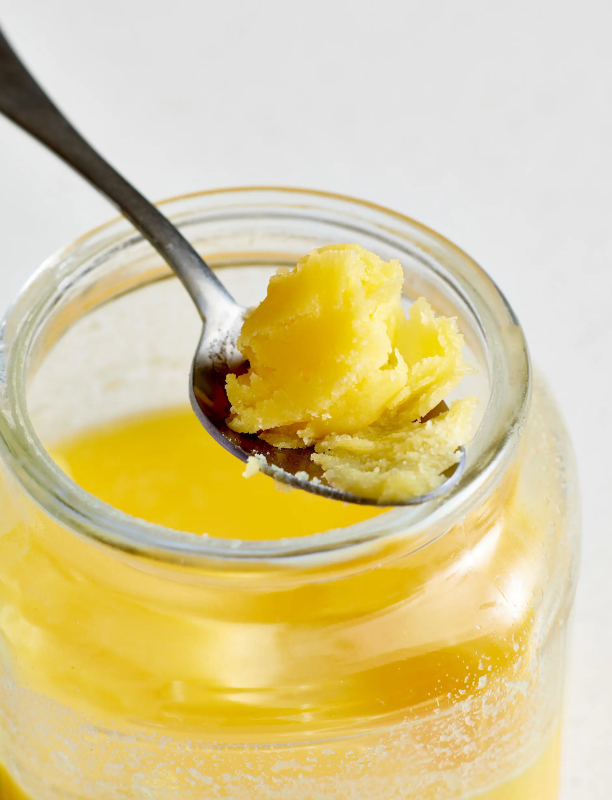 Boston-based Christopher Kimball’s Milk Street, an instructional food preparation organization, teaches that ghee is ideal for sautéing and searing steaks, chops, chicken and fish. Ideas for side dishes include sautéing greens or green beans in ghee and tossing with toasted slivered almonds, lemon juice and flaky salt to finish, according to Matthew Card, food editor.

“Try tossing fresh-cooked egg noodles with melted ghee, lots of poppy seeds and coarse-ground black pepper and salt,” he said. “Pair this with roasted or sautéed meats, stew or even top with a fried egg. On the sweet side, swirl melted ghee over oatmeal and dust with a pinch each of cardamom and cinnamon.”

Ryan Kukuruzovic, corporate chef at Wixon, uses ghee to make niter kibbeh, which has its roots in Ethiopian cuisine.

“Spices such as cardamom, cumin, fenugreek, coriander and cinnamon are simmered in the ghee then strained,” he said. “I enjoy making fresh naan bread with niter kibbeh; although the highly flavored ghee can be used in many applications.” 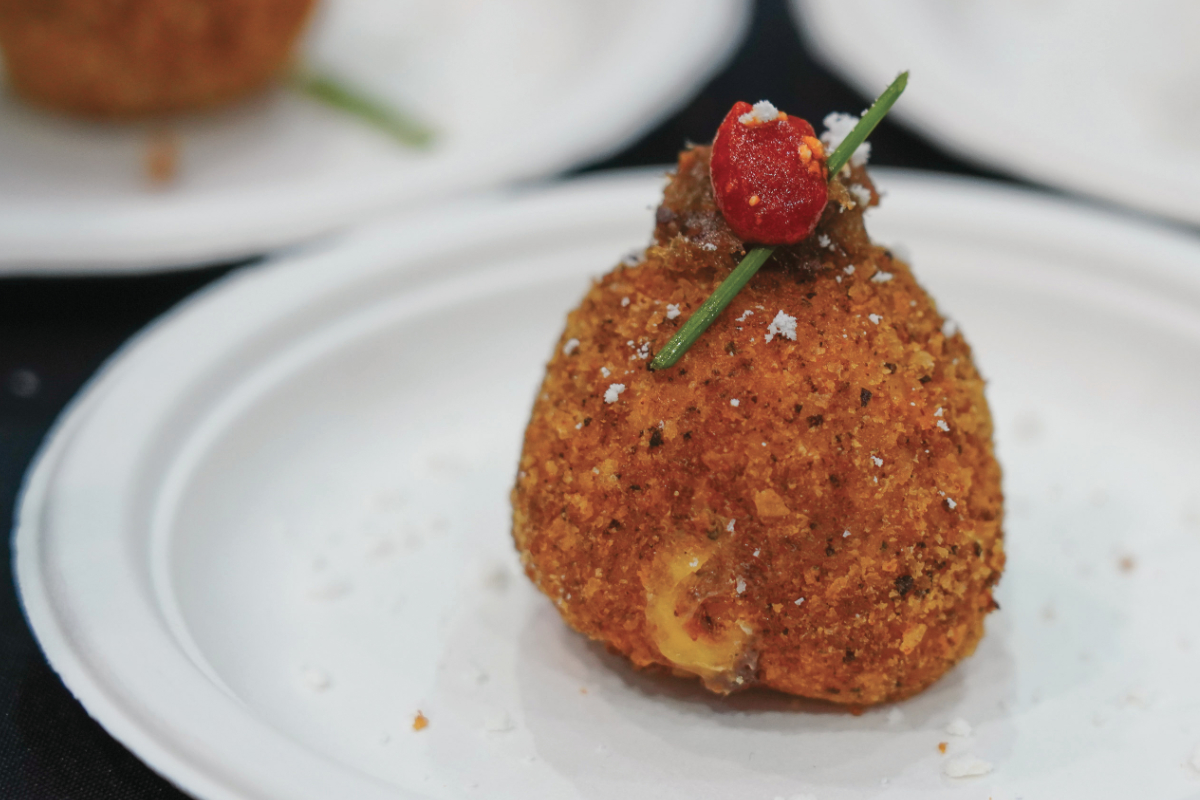 During the Great Depression it was common to save bacon grease for use as a cooking fat. While there may be a few home cooks and chefs who continue this tradition, it’s often too messy of a process to bother.

Because nothing quite matches the deliciousness that bacon contributes to almost any dish, culinary professionals may turn to commercially produced rendered smoked bacon fat, which is basically the leftover grease from cooked bacon. It is the byproduct of the manufacture of microwaveable bacon and bacon bits, with the impurities filtered.

At the 11th Annual Baconfest in Chicago, Chef Bob Zrenner of the multi-unit Tap House Grill replaced the mayonnaise in pimiento cheese spread with bacon fat. This resulted in a smoother, creamier dipping cheese with a smoky profile.

Dan Weiland, executive chef for About Last Knife, part of the Oxford Group in Chicago, combined rendered bacon fat with maltodextrin to create bacon dust. The powder was used as a garnish on a potato, bacon and pimiento cheese croquette. Such a dust may be used with both sweet and savory foods to deliver a smoky taste that may be varied by the type of smoked bacon. The technique also works with other rendered animal fats. 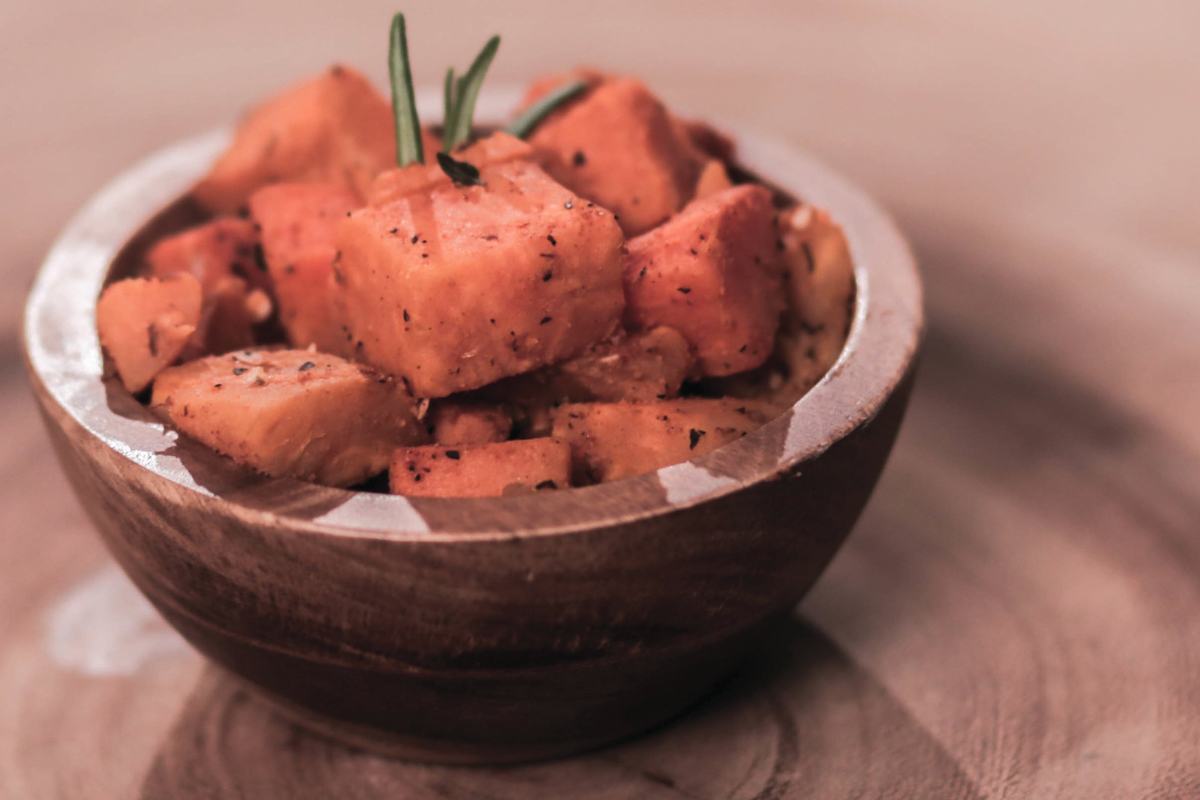 Industrial seed oils found their way into the American diet in the early 1900s. Until then, rendered animal fats — the fat melted out of meat, separated and saved — was used for most cooking.

“Tallow and lard were king,” said David Cole, chief executive officer of Fatworks. “With many consumers looking for more traditional and less processed foods, animal fats are making a resurgence.

“These traditional fats introduce chefs to a new world of potential flavors. Each fat, whether it be the neutral-flavored leaf lard, which is made from the visceral fat around the kidneys of the pig, the rich poultry fats like chicken and duck lard, or the hearty beef and lamb tallows, impart their own personality.

“A dollop on top of a grilled steak intensifies the beef-eating experience,” said John Draz, executive research chef for Ed Miniat L.L.C. “It’s also great for finishing vegetables, such as green beans, that are sides to any beef dish."

Justin Moser, executive chef at Table, Donkey and Stick in Chicago, likes working with lamb tallow, often using it as a confit medium.

“The flavor of lamb is so intense and delicious," he said. "The fat brings that." 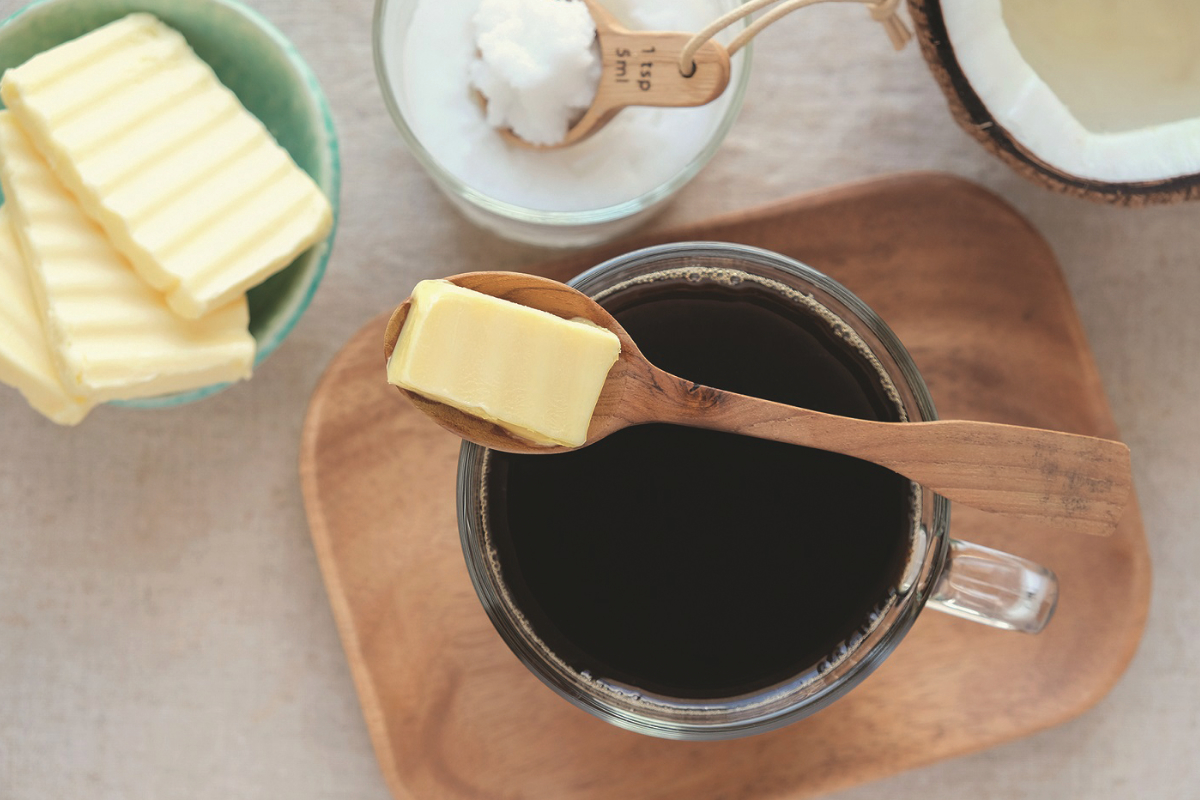 The popularity of the ketogenic weight loss diet has culinary professionals exploring techniques to offer foods that fit the approximate 75% fat, 20% protein and 5% carbohydrate targeted nutritional profile. Medium-chain triglyceride (MCT) oils play an important role. These are special saturated fats that have been shown to promote weight loss and assist with the reduction of the body’s fat mass.

Coconut oil is approximately 15% MCT, while palm kern oil and milkfat are about 8% and 7%, respectively. The latter varies based on the cow’s diet, with grass-fed milk yielding a higher concentration of MCTs.

With consumers’ growing interest in plant-based foods, coconut oil has become a popular fat choice. Because it is nearly 90% saturated fat, it has a firm texture at room temperature. When substituting coconut oil for another solid fat in a recipe, usage is often reduced by as much as 25% because of its higher percentage of fat solids. Its low smoke point makes it unsuitable for high-temperature cooking.

“Coconut oil has a richness like butter without the allergen,” said Apsen Burkhardt, culinary council member of LifeSpice Ingredients. “The less refined versions have some coconut flavor, a creamy light flavor that adds depth to a dish without always being recognizable.” 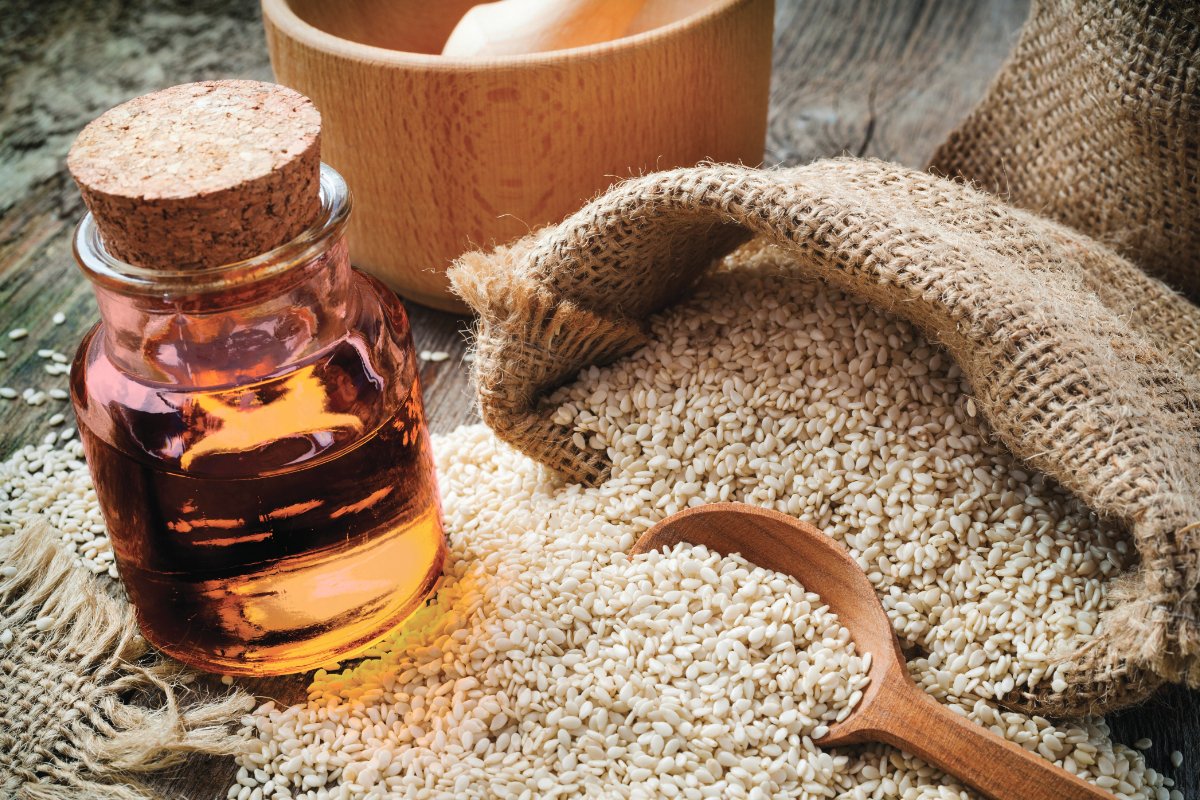 “They can often be added at low levels, where it is less about distinguishable sesame flavors and more about the unique toasted notes the oil contributes,” Mr. Koetke said. “These highly flavored oils make great additions to soups, grains, salsas, moles, meat systems and vegetable preparations. They also work well in sweet applications, as they have a strong affinity for caramel and chocolate.”

Chef Eddie Aguilar, owner of The Roaming Hog, said, “Toasted sesame oil is phenomenal to dress a salad, as it is very aromatic.”

As the name suggests, algae oil is made from algae, which are the base of the food chain for fish. It is the algae that makes fish oils concentrated sources of omega-3 fatty acids. Thus, algae is a vegan alternative to the fish oils often used for supplementation.

Because of cost, algae oil is usually used as a finishing oil; however, its light, neutral taste and high smoke point (485° F) enables it to be used in everything from baking to frying.

Produced from the kernels of the Moroccan grown argan tree, argan oil is best described as a finishing oil for topping dishes and salads. It may be drizzled on couscous or used as a pita bread dipper.

Argan oil has a low smoke point that prevents it from being used in high-heat applications. And while it can be used in baked goods, high-volume use is often cost prohibitive.

Unlike olive oil, which may be extracted from the whole olive, pit included, avocado oil is pressed only from the fleshy pulp of the fruit. The two have similar “healthy” nutritional profiles represented by a high concentration of monounsaturated fatty acids and antioxidants; however, unlike olive oil’s low smoke point, avocado oil has a very high smoke point (500° F) making it ideal for high-temperature cooking.

“Due to its high smoke point and stability, avocado oil is excellent for grilling, sautéing and pan roasting and frying,” said Rick Cummisford, director of quality at Columbus Vegetable Oils. “It is practically free of flavor and aroma, making it ideal for many savory and sweet applications. Try making powdered avocado oil by slowly mixing it with tapioca maltodextrin until you reach the desired texture. The oil is captured by the powder and it can be used as a sprinkle on salads or desserts. The oil remains trapped until it hits moisture and then it releases.”